Although it felt like ages since we'd gone for a proper walk, upon scrolling through my journal I was absolutely appalled at the fact that the last time was on the 20th of March.

As by now we were Tuesday the 27th of April, it was well over a month since we'd last dragged ourselves away from Dove Cottage's confines, our only outdoor pursuits, weather permitting, having been of the gardening kind.

There was, of course, that eternal deterrent, the weather, turning some of our favourite haunts into muddy mires. But it's all too easy just blaming it all on the weather, isn't it, instead of finding the culprit in our lethargic state of mind. 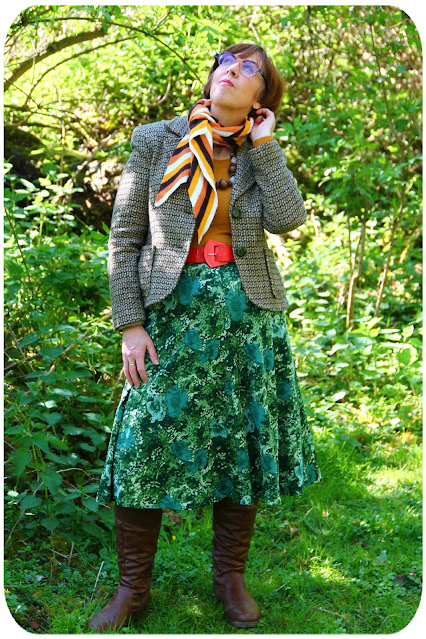 Tuesday was yet another one in a row of blissfully sunny days, the mercury climbing to an unheard of 17°C. Far too glorious a day not to make the most of, particularly as the weather forecast for later that week was looking pretty dire.

My appetite whetted by Monday's lunch break walk to to Antwerp's botanical garden, I was champing at the bit to sample some more of what Spring has to offer. 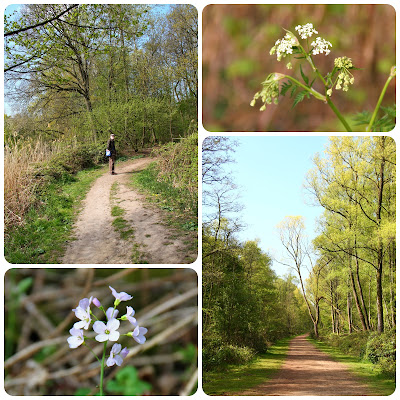 Jos was feeling a bit tired that morning but was soon persuaded so, grabbing a couple of sandwiches and a drink, we set off for the 10 kilometer drive to our nature reserve of choice.
The minute we took the path sloping down from the car park, we were met by nature's sensory delights, which offered an instant pick-me-up for our battered souls.
The path's verges were lined with the delicate white flowers and fern-like foliage of Cow Parsley and dotted with stems of Lady's Smock, or Cuckoo-flower. The Flemish names of these, Fluitenkruid and Pinksterbloem, instantly spring to mind courtesy of my nature-loving paternal grandfather, who clearly instilled his love of plants in me. 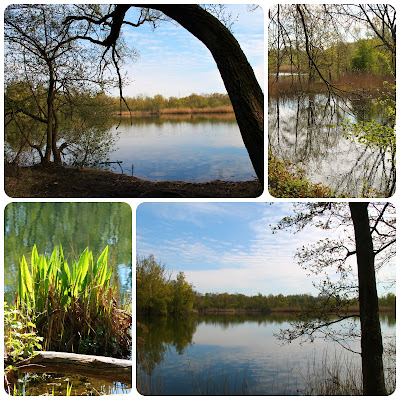 After years of steering clear, we rediscovered this nature reserve last Summer, and have been back several times since. In fact the last time we were here it was in seriously sub-zero temperatures, when Jos briefly ventured onto the edge of one of the solidly frozen lakes. Me, I was too much of a coward! 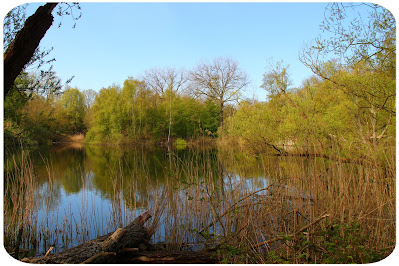 I love the seemingly boundless energy and exuberance of Spring, the invisible forces that make plants which have lain dormant over Winter push up new growth almost overnight, and the buds on the trees spread into leaves. She tugs at my heartstrings, Spring, she really does. And so does Philip Larkin's poem, The Trees: The trees are coming into leaf, Like something almost being said ... How beautiful is that? You can read the full poem here. 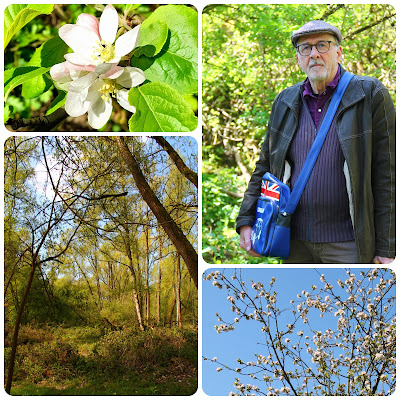 At one point, we took a path which was unknown territory to us, and almost, but not quite, got lost. Then we were temporarily side-tracked by some bird feeders which were being raided by a pair of squirrels, the cheekier of the two coming out to pose for the camera. You'll have to do with him, as for once there will be no photos of Bess in this post. I promise to make it up to you next time! 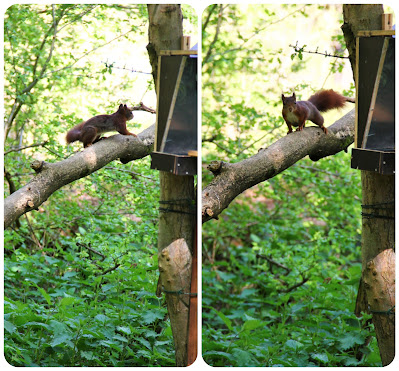 The temperature was still on the chilly side when we left that morning, so I dressed accordingly, opting for a skirt and jumper. While the skirt is an old vintage favourite, last worn in January, the thin knit jumper is Zara by way of a charity shop several months ago. This was its very first outing. My opaques matched its colour almost exactly, although it's a bit of a secret matching as they are hidden by my chocolate brown boots. The latter were a necessity, as there were still some lingering muddy patches. 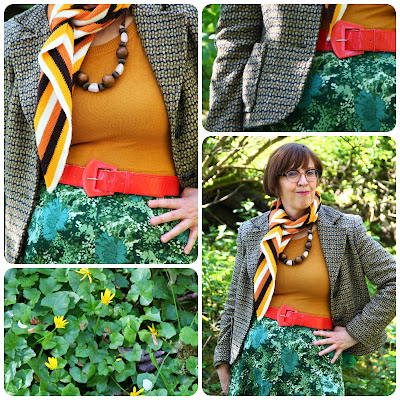 My accessories were a charity shopped red vinyl belt and a wood and glass beaded necklace, which I bought from Accessorize back in the mists of time.

Both the green hued wool blazer and the yellow, orange, white and brown knit scarf were charity shop finds. 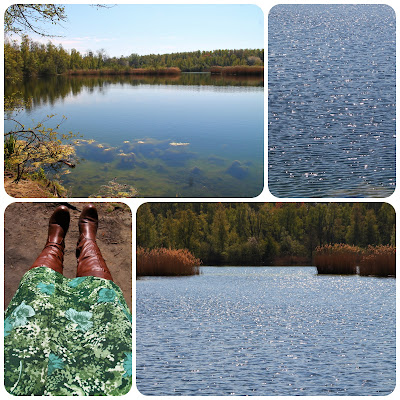 By noon, all that fresh air had made us peckish, so we started looking out for a suitable bench, which we found in a sunny spot overlooking the largest of the lakes.

The bench once again being slightly too high for vertically challenged yours truly, I sat dangling my legs, enjoying the stillness - and my sandwiches - with the sunlight shimmering across the lake. 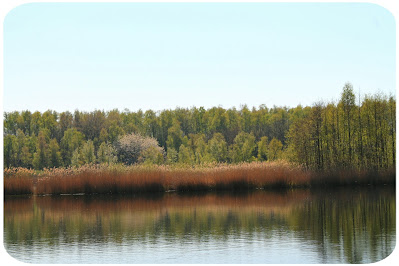 Wednesday would be the last in the string of sunny days, the temperature soaring to a balmy 20°C.
It was another office day, unfortunately, and I snapped the below photo from the car, while waiting for the traffic lights to change. We're on a leafy avenue here, with a small park to our left, and the WATT building in front of us. This modernist 13-floor building dates from 1958 and used to be the headquarters of the electricity board. In recent years it has been turned into a state of the art coworking space. 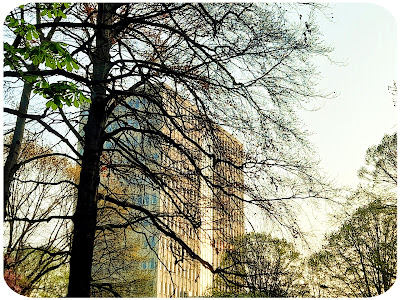 All that sunshine and walking had made me bold enough to once again venture outside during lunch break. This time, I even strolled along a short stretch of Antwerp's main shopping street which mercifully wasn't too busy. I soon turned left and found myself walking towards the nearest Think Twice shop, fully prepared to turn heel should there be a queue. But there wasn't, and as there were only a couple of other browsers, I stepped inside. And no, believe it or not, I didn't buy anything. I was actually quite overwhelmed and left after just a couple of minutes' browsing. It's almost unimaginable to think I spent many a lunch hour in this and the other Think Twice shops pre-Covid! 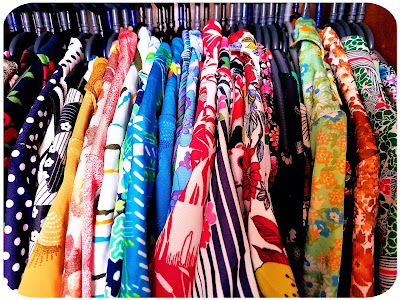 The weather made a U-turn on Thursday, the temperature plummeting considerably and leaving us with a measly 10°C. This came accompanied by ominous grey skies from which soon raindrops starting falling. The harsh wind this came with made it feel even colder.
After breakfast, we made our weekly trip to the garden centre, purchasing the first of without a doubt many annuals, which we planned to fill some gaps in our patio pots with over the weekend.
Back at home, I retreated upstairs and continued with the eternal wardrobe changeoever, digging out another batch of Spring and Summer frocks ready for wearing once the weather starts behaving as it should. 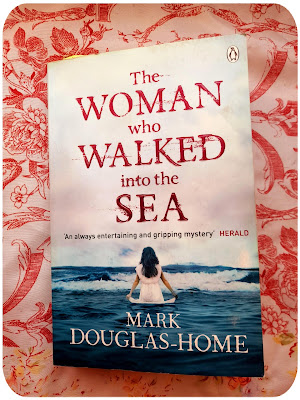 That task finished, I spent some time on the couch reading my latest book. The Woman Who Walked Into The Sea by Mark Douglas-Home is part of a crime series featuring Cal McGill, a Scottish oceanographer and one-of-a-kind investigator who uses his knowledge of the waves to find where objects - and bodies - came from, or track where they've gone.

It was a compelling read which I've just finished this morning, but I'm not 100% convinced it will make this year's shortlist. 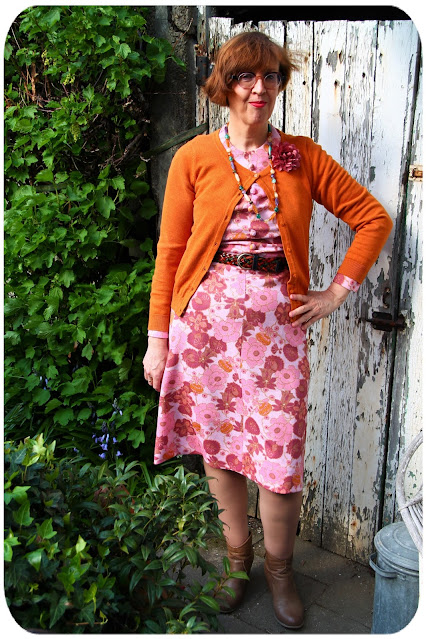 By then, the sun had made a brief in-between-showers appearance, so that we had no time to waste to make the day's outfit photos.

My hair, which was in need of another pampering session, was intent on doing its own thing, so I'm trying to divert your attention to my dress, a vintage Crimplene one featuring a floral pattern of pinks, plums and oranges and a row of self-fabric buttons running down to the waist. 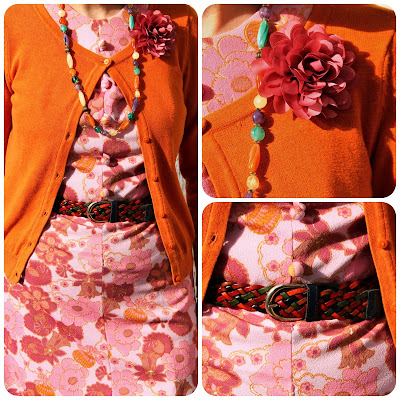 I ditched its self-fabric tie belt for a multicoloured woven leather one picked up in a charity shop.

My necklace was charity shopped as well, while both the burnt orange cardigan (H&M) and the flower corsage pinned to it (from haberdashery and accessory shop Veritas) were old retail buys. 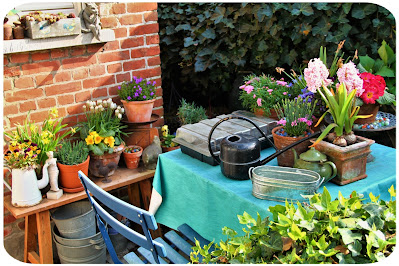 I will be back with slightly better weather and further gardening adventures in a couple of days.

Please do stay happy and healthy until then!