It was a gloomy morning we woke up to on September's last Sunday, with a leaden sky holding a promise of rain.

The temperature kept hovering around 15°C but the lack of any sunshine made it feel decidedly chillier.

Scanning my rail of dresses for a likely candidate to wear on such a day, my eyes alighted on this fit and flare 1970s does 1940s number in a heavy knit polyester. 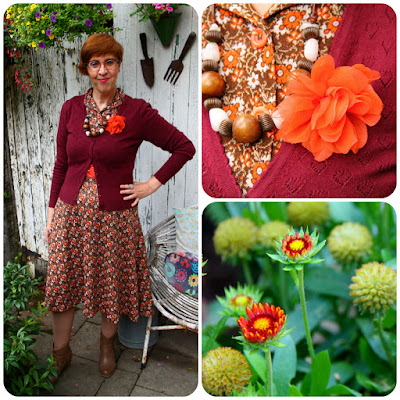 I'm in two minds about whether it was a charity shop or Think Twice find, but it has lived in my wardrobe for many a year. With its floral brown, orange and white print, it couldn't be more 1970s if it tried, while its colours and weight of fabric make it the perfect dress for those early Autumn days.

As it's short-sleeved, it does need a bit of layering to keep the goosebumps at bay, so I wore a burgundy King Louie cardigan on top. Isn't its heart-shaped ajour pattern delightful? I have several of these cardigans in a range of colours, picking them up whenever I find them in the charity shops.

To tie in with the dress's colours, I pinned a generous orange flower corsage to my cardi. 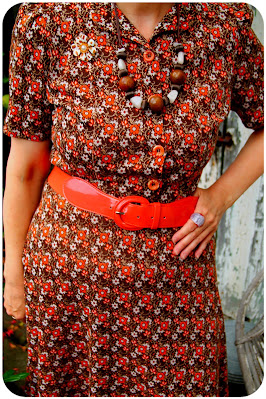 My shiny orange, half-elasticated belt is an old high street buy, which has seen better days, the scuff marks on its buckle disguised by orange nail varnish!

The brown and white necklace with its wooden, polished stone and metal beads was another charity shop find, as was the brooch, which seemed to blend in organically with the pattern of my dress. 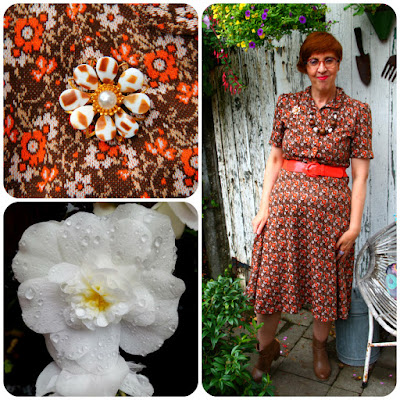 From our window, we watched hordes of people making their way towards the village centre and the annual September fun fair, which much to our dismay wasn't cancelled due to Covid-19. Admittedly, it was a slimmed-down edition, with a one-way system and the necessary precautions, but with cases still soaring dramatically, surely this was madness. We could only shake our heads and sigh when we saw groups of people acting as if nothing was out of the ordinary. Even the rain we were treated to that afternoon didn't seem to deter them! 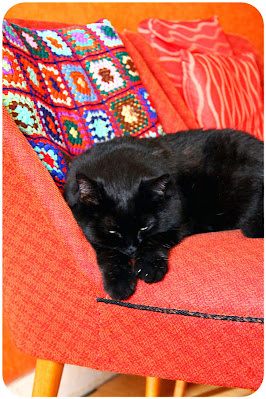 We were following Phoebe's example and opted for the comfort of our sitting room. Not for sleeping away the day as is our furry creature's habit, obviously! There's no shortage of reading matter at Dove Cottage and, accompanied by some relaxing music, it was just what we needed to while away this Sunday afternoon.

In-between showers, I ventured into the garden, where big fat raindrops had joined the bulging flower buds in the pot of annual Fuchsias in the passageway (top right), and I was pleased to see tiny buds were starting to appear in the Toad Lily (Tricyrtis hirta, bottom left) we brought back from the garden centre in August.

Will it still grace us with some flowers this year, I wonder? Its plant label says flowering time is August to September ... 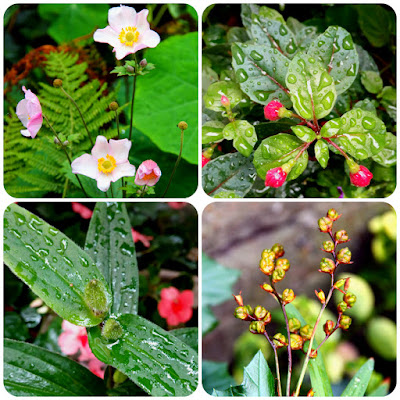 The rain continued overnight and it rained all day on Monday too. Sitting on my own in an otherwise empty office feels even lonelier on a dark day like this, when cotton wool is joining the turmoil in my head. 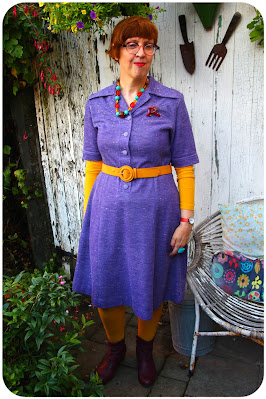 Life-affirming Autumnal sunshine streamed through our windows on Tuesday morning, so after our usual fruit and yoghurt breakfast, I enjoyed a leisurely walk into the village to run a couple of errands.
Still persevering with my short-sleeved frocks, I layered a long-sleeved t-shirt underneath this vintage Burlington Jersey dress, its fabric a polyester and wool blend.
And no, your eyes are not deceiving you! There really isn't any print to be spied in my entire outfit! 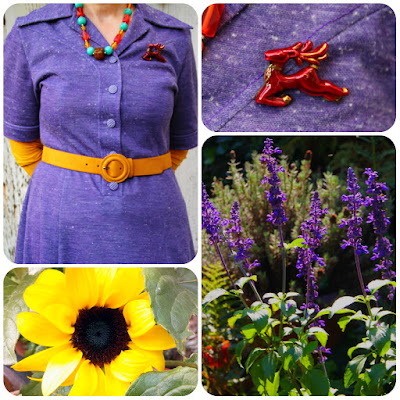 Pondering what to wear when I got up that morning, this outfit appeared in my mind's eye quite out of the blue. If purple and yellow manage to live together harmoniously in the garden, then why wouldn't they please the eye in an outfit?
To accompany the dress and long-sleeved t-shirt, I dug out a belt and opaques in the same ochre yellow as the latter, spicing it up with a wine red leaping deer brooch and a beaded necklace which added brown and turquoise to the equation.
My old and worn burgundy ankle boots once again completed my outfit. 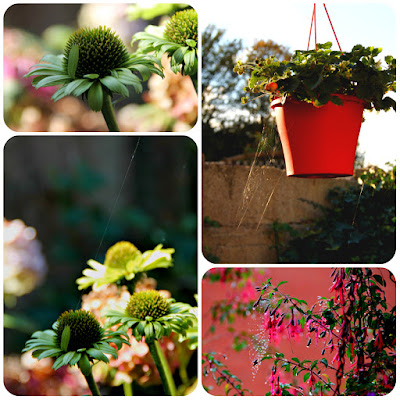 The sun continued to grace us with her presence until mid-afternoon, when she lost the battle to the encroaching clouds.
For days, I'd been intrigued by a petal of one of our Echinacea 'Green Jewel' flowers, which appeared to be growing in an upward position. With the afternoon sunshine illuminating the spider webs which seem to be especially prolific this Autumn, I noticed that a clever spider had anchored its web to the petal in question. Can you see the gossamer thread leading upwards? It goes all the way up to a web suspended from our hanging strawberry plant! The latter, by the way, is still trying but so far bitterly failing to produce some more fruits. 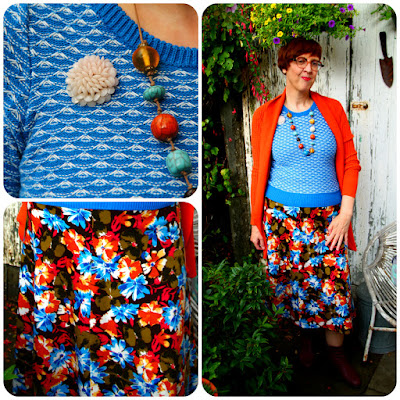 Wednesday was another office day, which was interrupted by a visit to my hairdresser for a colour and cut. This would have made for a relaxing hour and a half, if it weren't for the mask wearing.
At times like these, I'm glad I'm all on my own in the office so that I don't have to bother with a face mask. Kudos to all of you who are having to wear a mask for hours on end!
Back at home, it rained for most of the day on Thursday, which was the 1st of October, but we managed to nip outside for outfit photos during a rare sunny interval.
I was determined to wear the blue and white short-sleeved jumper I'd found in the charity shop the other week, and was pleased to find an exact match for its colour in the blue flowers of this skirt. 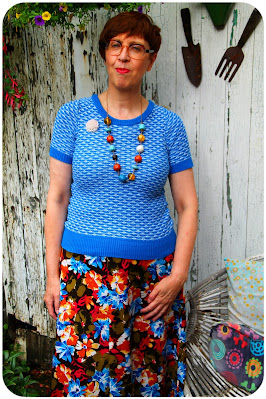 My long beaded necklace managed to bring all colours together, while I added a white accent to the jumper in the form of a white-petalled 1950s brooch, one of a handful that kick-started my collection.
Extra warmth was provided by a long-line orange cardigan, picking up the orange bits in the skirt. 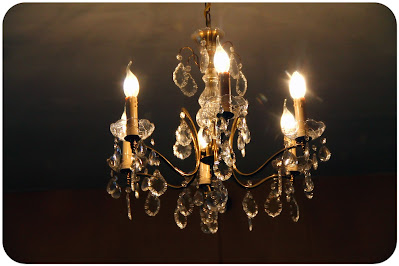 While Jos was doing the food shop that morning, I tackled our bedroom's chandelier which had become rather dusty over the years. Apart from a perfunctory dusting with a feather duster now and then, it would be its first proper cleaning. This involved me standing rather precariously on top of a wooden box which in its turn lives on top of the linen chest at the foot of our bed. 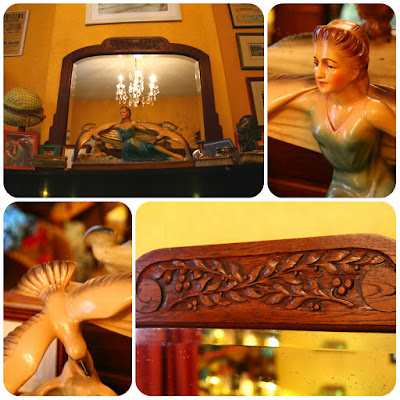 Standing that high up meant I had an almost bird's eye view of the rest of the bedroom.
You already know the green Art Deco lady who resides in front of the mirror on our mantelpiece, but here she is again, together with one of her pet birds. The antique bevelled mirror with its carved wooden frame was a charity shop find from back in the days when these things didn't go for a fortune. 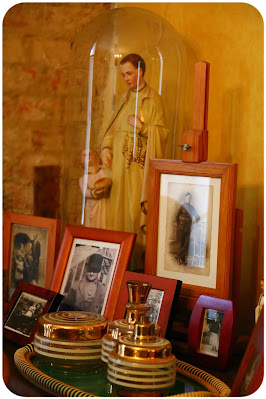 This is part of what's on top of the cupboard to the left of the mantelpiece. Apart from a collection of old family photographs, there's an antique glass-domed religious statue (one of a pair), an heirloom which used to belong to Jos's grandparents.
The vanity set in the foreground was one of my parents' wedding presents, which I remember being on display in their bedroom when I was growing up. In our bedroom, it is feeling quite at home on top of the vintage wicker and glass tray, a flea market find back in 2016. 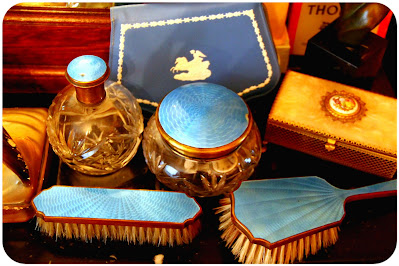 To the left of the green lady on the mantelpiece is a blue enamelled vanity set found in a charity shop in Tunbridge Wells about 15 years ago. The blue vinyl Jasper ware-style case behind these holds a nail grooming kit, and was a flea market find, as was the trinket box with its Limoges decal behind the brush. 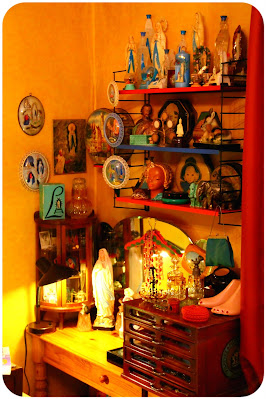 And finally, here's the little corner with my "dressing table", offering a view of the shelves above, which didn't appear in my post on the subject back in April.
The shelves hold the accumulated stuff we've collected over the years, all charity shop or flea market finds. While there's a 1930-ish link to the items on the bottom two shelves, the top one holds the kitschy Lourdes souvenirs we used to collect.  Now that's a shelf that definitely needs some dusting too!
Something I'll certainly have time for now, as more rainy weather seems to be on the horizon.
See you next time, and do stay safe!