Rest and be thankful

It's quite unfathomable that only a couple of days from now it will be seven months since my working week was reduced to a mere two days. And while it has undeniably been and continues to be a bumpy ride, each tiny up followed by a freewheeling down, these topsy-turvy weeks have been a blessing, albeit one in an at times very clever disguise.

I'm not going to beat about the bush: I love being at home and having more time on my hands than I ever imagined having before retirement. The one thing I can't say is that I have always used it wisely.

And so, while the virus seems to be taking its toll more than ever, the weeks continue to roll along in their out-of-sync way, the seasons following in its each other's wake just like they did before. If we'd  imagined 2020 as the start of another roaring 20s, we could never in a million years have imagined the enormity of what we were about to be hit with. 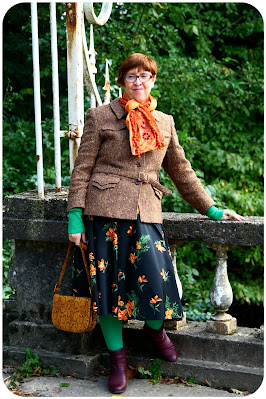 Two weeks ago on Thursday, after a particularly stressful office day on Wednesday, I was more than ready for another four-day stretch at home.
While Jos was doing the food shop, I rummaged around upstairs, going through boxes of half-forgotten stuff and filling a couple of bags for charity with no-longer loved or wanted items of clothing.
The weather turned out to be quite nice and, if initially a bit chilly, the sun which put in an appearance  by mid-morning soon warmed things up. Too good to waste the afternoon inside, I suggested to go for a walk and take the charity bags to the Oxfam used clothing container just over a kilometer from our home.
I dusted off my beloved but slightly moth-eaten belted Tweed jacket, wrapped an orange crushed velvet scarf around my neck, and grabbed my yellow snake print bag, a cheeky retail buy last year just big enough for essentials: my phone, hand sanitizer and, obviously, my mask. 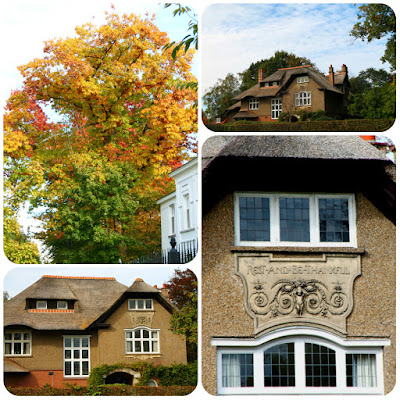 Turning two corners, we arrived on one of our village's main access roads, which on this particular stretch is lined with some grand detached houses, each in their own generous grounds and often protected from prying eyes by shrubs and trees. On this glorious October day, these delighted us with their amber and russet foliage.
The most covetable of these houses is a villa called "Rest and Be Thankful", built in English cottage style in 1906. It was here that the surrender of Antwerp was signed on 9 October 1914 after the city was heavily attacked by the German army in the night of 7 to 8 October. In order to avoid further bombardments, all of the occupying forces' demands were met and the Belgian army subsequently withdrew behind the River Yser, which greatly determined the war's ultimate course. 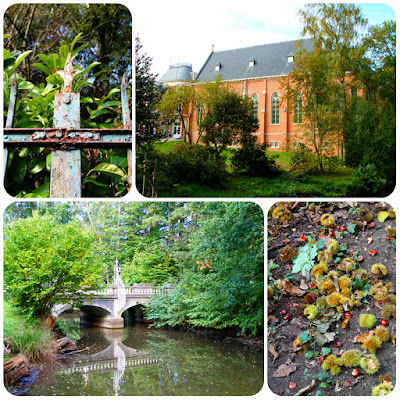 We made a shortcut through the somewhat unkempt Altena park, where glossy chestnuts and their prickly husks were littering the paths. We dropped off our bags, and then returned to the park for a short stroll and, of course, the obligatory outfit photos.
The park is part of a domain which used to belong to an order of nuns, but which was taken over by the council in the 1980s.
The big chapel on the top right, built in neo-Gothic style at the end of the 19th century, has been turned into a venue for concerts and exhibitions. 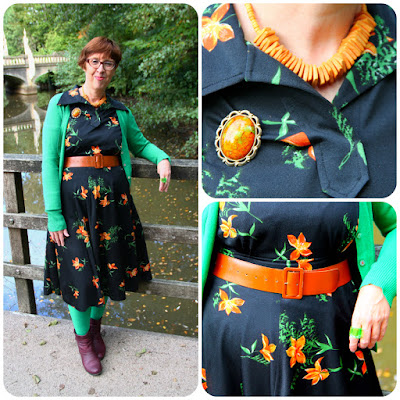 The black floral Mae Scott frock I was wearing was yet again part of my Think Twice birthday booty back in September.  I accessorized it with both colours of its print, choosing a green cardigan and opaques, an orange necklace and a green and orange flecked brooch. The belt with its rectangular buckle could almost pass for orange, especially in the close-up picture, but is actually a caramel brown. 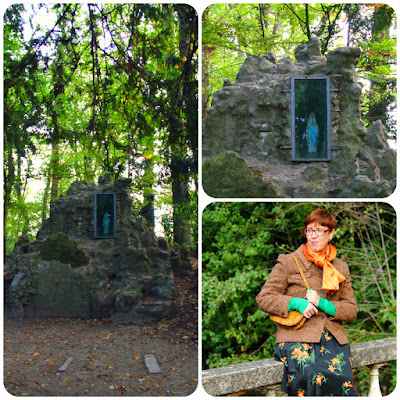 Before leaving the park, we halted at the Lourdes grotto, dating from 1881, and sent up a silent prayer for a miracle.
Back at home, I was thrilled to find that the first of our Toad Lily's late flowers was in the process of opening. Over the next few days, it would be slowly but surely revealing its exquisite contents. 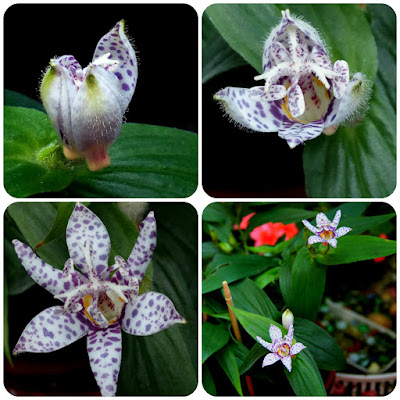 Our garden's micro climate ensures that there's still quite a bit of colour, with some of our garden stalwarts having been in flower almost continuously since Spring. 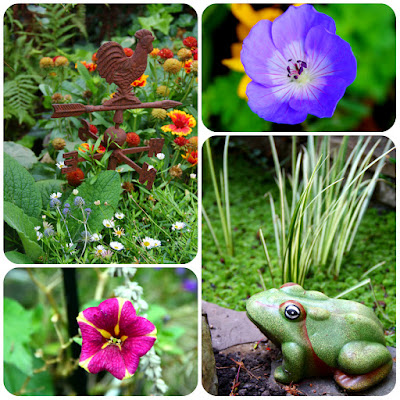 Remember the non-ribbiting frog (bottom right) we found hidden under some ivy back in April? He used to make a "ribbit" sound when you walked past him, but in spite of cleaning him up and changing his batteries, the poor thing remained mute. Well, out of the blue, he suddenly started ribbiting continuously. We only found out after Phoebe came running inside in a panic. We had to remove the frog's batteries to make him stop, but it took Phoebe until the next day to pluck up the courage to go out into the garden again! Scaredy cat! 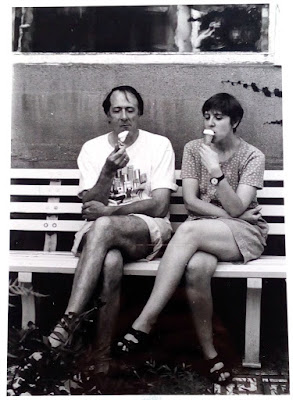 Being in productive mode, we put up the black and white photo I'd found when rummaging in our bedroom's built-in cupboard (a cupboard of doom if ever there was one) that morning.
It was taken by Jos's younger daughter during our first Summer at Dove Cottage back in 1999. We were both wearing shorts, Jos still had a lot of hair, and we are sitting on our garden's original, ugly white plastic bench, which would soon be replaced by our current one. 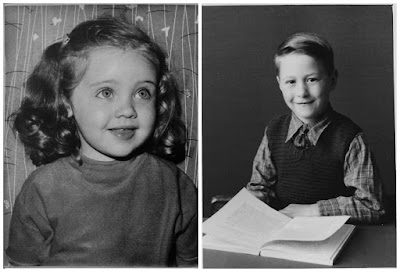 Joining the photo are two of our childhood photos: a two-and-a-half year old curly me, and a school photo of a cute, eight-year old Jos. The Summer after my photo was taken, my Mum had my hair cut into a pixie, and the curls disappeared forever. 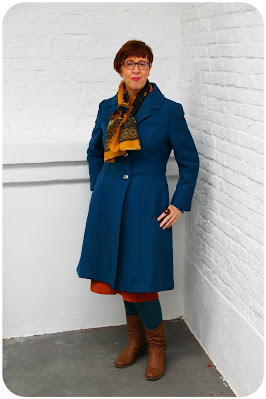 The next day, Friday, had to do without Thursday's sunshine and thus turned out to be quite a grey and dismal affair.
For our weekly charity shopping trip, I wore my all-time favourite coat, a vintage teal new wool one which, with its medium weight, has seen me through many an Autumn and Spring by now. I am always looking forward to wearing it again.
The photos were taken after we came back, and the scarf I'm wearing was one of my finds, matching my outfit perfectly. 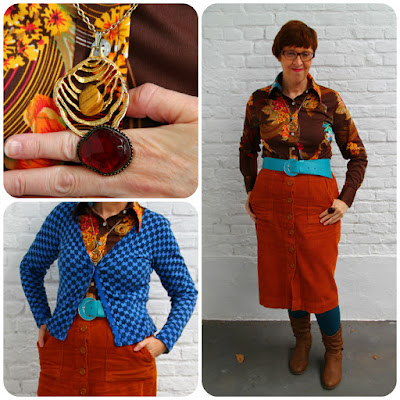 The peek of burnt orange emerging from under my coat belongs to a button-through cord skirt I charity shopped last year. It's currently on the naughty bench as, being unlined and thus rather unwieldy, I didn't feel very comfortable wearing it. And yes, I was wearing a half-slip underneath!
My chocolate brown vintage blouse has a striking flower and circles print in yellow, orange, pink and a hint of turquoise. I chose the latter as an accent colour for my belt and cardigan, finishing my outfit with teal opaques. The brooch I was wearing somewhat disappeared in the pattern of my blouse, but on the top left you can see my tiger-eye pendant and my reddish brown glass ring. 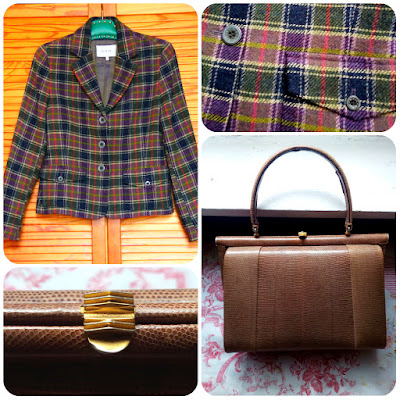 Pickings were meagre in the first shop, where I only found the scarf and a book, while we made a U-turn at the second shop as it's car park was absolutely rammed.
Feeling peckish, we returned home for lunch, after which we drove to the small charity shop in the neighbouring village. Here, a brand-new looking tartan Gigue jacket and a vintage handbag with the label of a long-gone shop on a posh Brussels street were waiting for me. 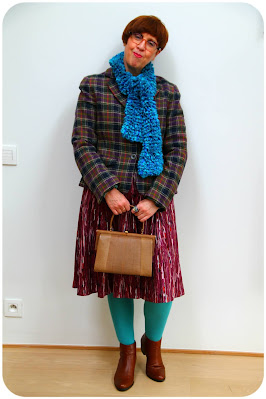 I wore both straight away the next day. That morning I'd filled another bag for charity, which we dropped off at the Oxfam container on our way to Jos's son and daughter-in-law to feed their cat, Abby. 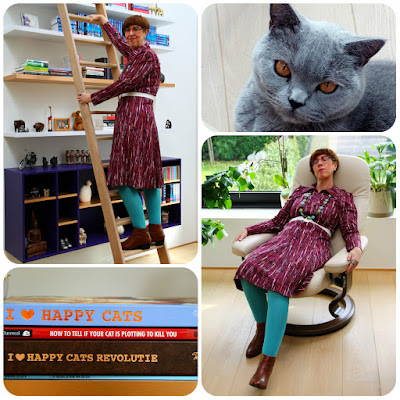 They recently had new bookshelves installed climbing the wall of their cathedral like living room, complete with a library ladder. It goes without saying I had to try out. Not all the way up, though, as I do suffer from vertigo!
Quite a collection of cat books they have. The title of the middle one made me laugh, although by the looks of it, Abby might actually be plotting something!
But isn't posing for photos tiring? 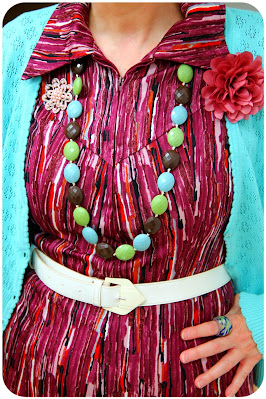 My higgledy-piggledy striped purple dress is an old favourite which has made it to the blog many times before.
Again I turned to turquoise to stir things up, appearing in my cardigan, opaques and some of the beads in my necklace. A pink pearly brooch was pinned to my dress, while a rose-pink flower corsage adorned my cardigan. Finally, I accented my waist with a white vinyl belt and chose a swirly white, blue and green glass ring, which you can just catch a glimpse of in the last photo.
Well, that's it for now. I do hope you'll join me again in a couple of days. See you on the other side, and please do stay safe!
Posted by Polyester Princess at 19:23