It seems that for once the weathermen got it right, as the weather started sliding down the slippery slope of Autumn in the days following our walk and picnic in the sculpture park.

We were Thursday 24 September by then and if initially there wasn't much sign of the predicted rain, the temperature had dived well under 20°C.

Nevertheless, I was determined to wear the short-sleeved mod dress I'd found in Think Twice the other week, before long-sleeve weather would be well and truly upon us. 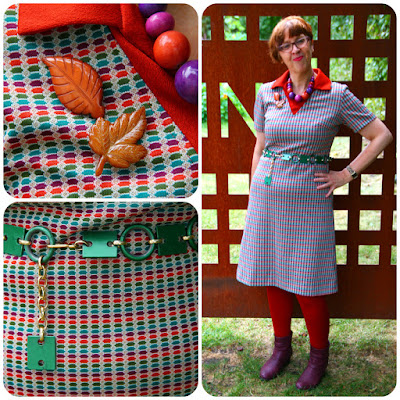 As the dress's fabric is a polyester knit, it was warm enough on its own, only requiring the wearing of a full slip underneath.

Its print is hard to distinguish from a distance (I'm hearing you Sheila!), but you can see its delightful teal, purple, orange and olive green colour scheme in the close-ups.

Making full use of the dress's Autumnal vibes, I matched my opaques to its solid burnt orange collar, and added a green chain belt and a purple and orange wooden beaded necklace. A further nod to the season was provided by the two vintage Autumn leaf brooches tumbling from my shoulder. 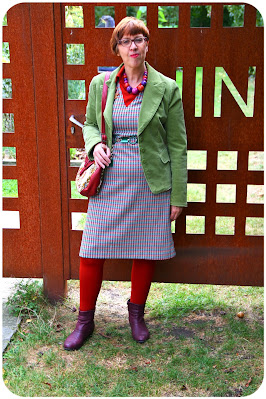 My beloved burgundy ankle boots, which I've had for the better part of ten years, and have been to the cobbler's once or twice during their lifetime, are now definitely on their last legs. So far, my search for a replacement pair hasn't been successful, so I'll keep on wearing these until they fall apart completely.
To combat the sudden chill, I was wearing an olive green H&M cord jacket, a local flea market find last year. 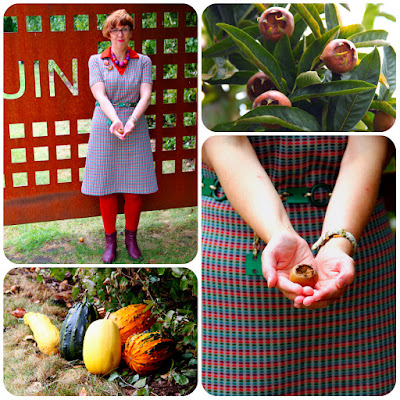 While Jos did the twice-weekly food shop that morning, I pottered around the house, but I felt a bit restless and didn't seem to be able to get stuck into anything in particular.
Nothing that a good old rummage couldn't fix, we thought, so after lunch we grabbed our coats and masks and were off to the charity shops.
But first we stopped at the local museum's rusty garden gate for some outfit photos, while gathering some of the medlar fruits which were littering the ground and admiring the glut of pumpkins beyond the gate. 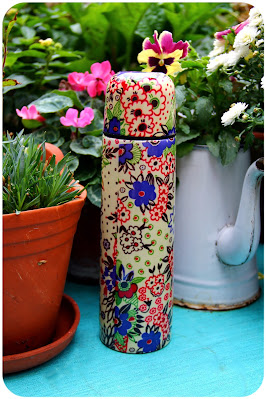 We spent a happy few hours rummaging in two of our favourite shops and certainly didn't come away empty handed. My favourite find in the first shop must be this floral thermos flask, which will be accompanying us on our next picnic. It's in perfect shape and it was a steal at just € 1,20. 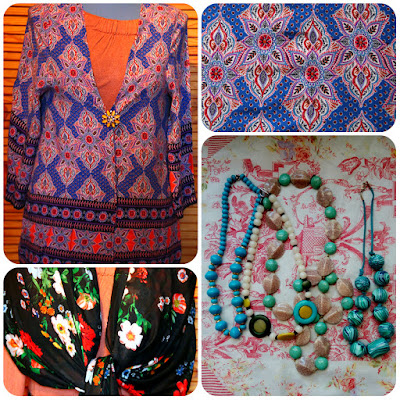 Further finds were a lightweight cotton kimono-style jacket, which I'm looking forward to wearing next Summer, a massive black floral scarf, and a handful of necklaces. 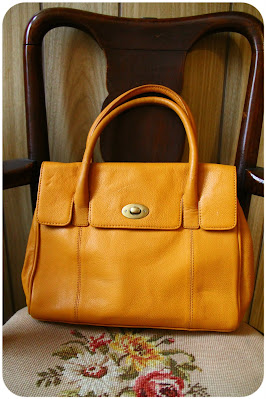 In the second shop, I fell head over heels for this butter-soft yellow leather handbag, but as it had a small black scuff mark on its front, I initially put it back. After asking Jos for a second opinion and a furtive scratch with a fingernail, we decided it was just a stain and thus removable.
Back at home, we set to work immediately but much to our dismay, rubbing the stain only seemed to make it worse. We decided to leave it and take it to our cobbler, who'd once worked his magic on a pair of seriously scuffed shoes of mine. But when I walked past the bag an hour or so later, the stain had magically disappeared almost completely. Perhaps burning those candle at the fever chapel did the trick? Whatever the case, please meet my new workday bag, providing sunshine on even the rainiest of days. 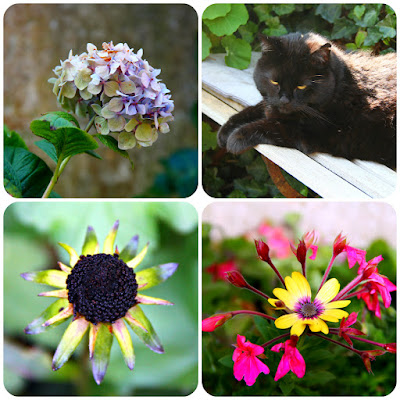 Speaking of rain, by the time we left the second shop, the first drops were starting to fall, and without the warmth of the sun, the temperature had dropped even lower.
Fortunately though, a weak sun soon reappeared, so that we managed to make it home without having to use an umbrella.
Making the most of the dry spell, Phoebe and I went on a foray into the garden. While she nodded off on the bench, I admired the tenacity of nature to make flowers look beautiful even in their final hours. I was particularly enchanted with the yellow Osteospermum caught in a cluster of trailing Geranium flowers. 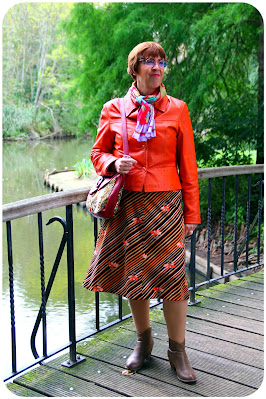 We woke up to a blanket of grey on Friday, but although the weathermen had gleefully forecasted atrocious weather, it was still dry when we left the house after breakfast.
We'd planned to go charity shopping again, deciding to visit our all-time favourite shop in Duffel, which we'd been avoiding until now as it tends to be quite busy. Indeed, even this early in the day, its car park was full. Rather than turning heel - or should that be wheel, perhaps - we drove on to the nearby park and decided to try our luck again a bit later. 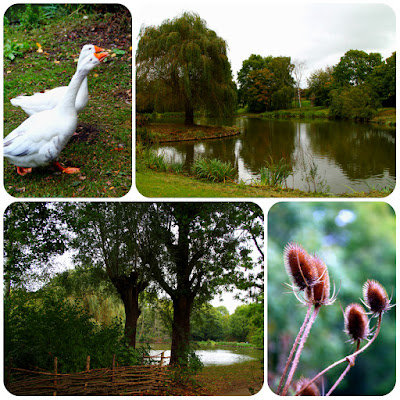 As it still didn't look like rain, we went for a stroll, marvelling at the fact that we hadn't been there since January. Back in normal times we used to go there at least once a month, if not more, combining a short or longer walk in the park with a visit to the charity shop.
We'd just decided on a the perfect spot for outfit photos, when we were chased away by two white geese throwing a hissy fit. 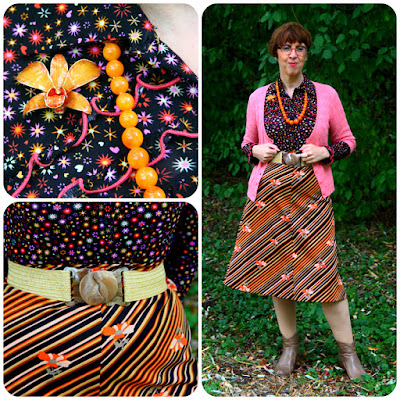 Nothing for it but to cross the bridge and look for a sheltered spot where I could remove my coat to show you what I was wearing underneath.
My 1970s diagonally striped skirt, which last made an appearance back in Spring, was accompanied by one of my recents finds, a frilly Kookai blouse sprinkled with a galaxy of stars, hearts and flowers.
Taking my lead from the pale pink hearts in its print, I wore a thin pink cardigan on top which, in spite of the chilly wind, I took off to show you my blouse in its full glory. The things one does for blogging! 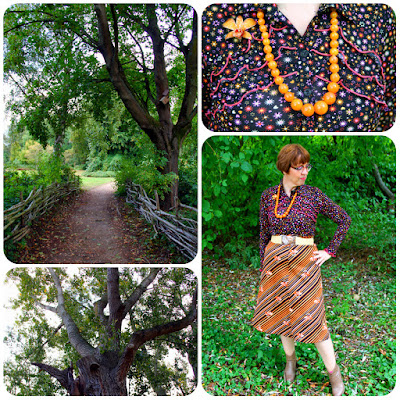 Tying in with the blouse's orange flowers, as well as the orange stripes in my skirt, I chose an orange beaded necklace and a tawny orchid brooch.
My outfit was completed with a stretchy belt with the most fabulous clasp buckle, a cheeky retail buy from a couple of months ago. 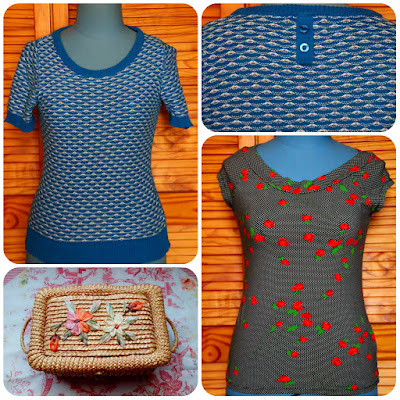 Afterwards, we returned to the charity shop and, as many gaps had appeared in the car park in the meantime, we decided to risk it and go for a browse.
Pickings were rather meagre, but I still came away with two tops, a short-sleeved blue and white cotton jumper with the cutest button decoration on its back and a King Louie top scattered with red roses. And obviously I couldn't leave behind the small € 0,30 wicker sewing basket for my growing collection. 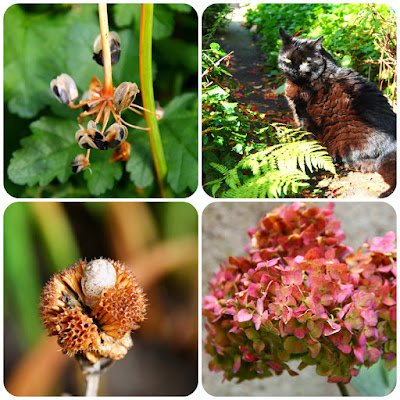 The rain came in the afternoon, and in all its ferocity was joined by a gale force wind which kept rattling our shutters all night.
Miraculously, nothing seemed to have suffered too much in the garden when I went outside to take stock on Saturday morning.
Again, both Phoebe and I made the most of the sunshine, which much to our surprise remained with us for most of the day. Basking in the sun's golden rays, even our little black monster seemed to take on an Autumnal hue. 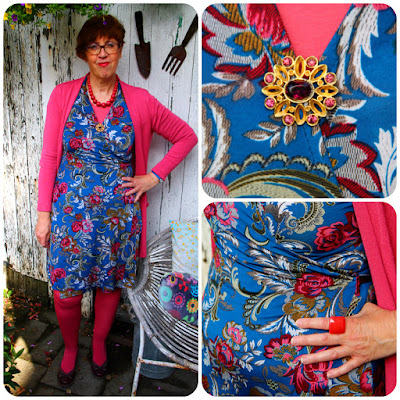 I was wearing another one of my recent charity shop finds, a wrap dress by St. Germain Paris in a striking cobalt blue with a wallpapery scrolls and roses print.
The pink roses offered the perfect excuse to pile on the pinks, so in addition to the t-shirt I layered underneath the dress, I wore bright pink opaques and a matching long-line cardigan. I echoed the reddish parts in the print by wearing a red ring and beaded necklace and kept the dress's decolletage in check by pinning it with a gold-tone and purple brooch. 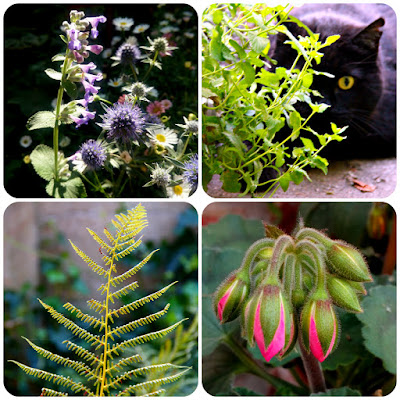 I'm leaving you now with a last look at the garden before we were treated to endless days of heavy rains.
There's a harmony of sea holly, catmint and fleabane, a fresh cluster of pink Pelargonium flowers and one of the many fern fronds turning yellow and eventually brown with age. Oh, and Phoebe high on catmint!
I'll be back in a couple of days. In the meantime, I'm counting on you to stay safe and sane. And fabulous, obviously!
Posted by Polyester Princess at 19:25