Always take the weather with you

With the weather still playing foul, life has been happening mostly indoors the last couple of weeks and, to be honest, being cooped up inside has been doing my head in.

This time last year, we already had some gorgeous Springlike days behind us, which we made the most of by topping up our Vitamin D levels in our local parks during the weekends. Sadly, what with the never-ending rain and the succession of storms which always, like clockwork, seem to find us on a Sunday, we've hardly ventured outside at all this year.

On February's penultimate Friday, with the unexpected sight of the sun streaming through my office windows, I decided to outsmart the weather by cheekily taking the afternoon off. 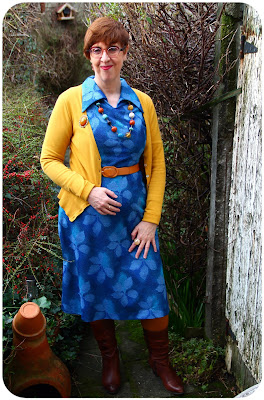 Fully used to supplying my own portable sunshine by now, I was wearing sky blue accessorized with sunny yellow.

The dress was a fairly recent Think Twice find, bought on the same day as the blue houndstooth frock I was wearing in one of my Bruges posts. Sprinkled all over with tiny dots, its botanical print in a twosome of blues gives the impression of a Pointillist painting. 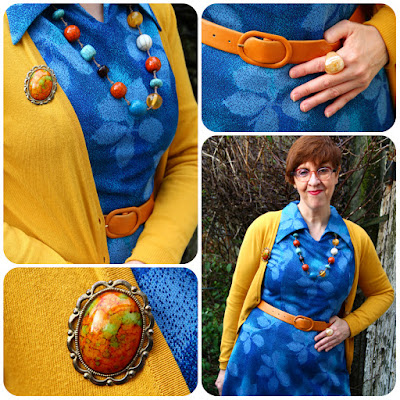 Although I loved the dress's gentle A-line shape and oversized collar, I initially thought it looked a bit plain, but adding the ochre yellow belt and my favourite multicoloured necklace seemed to do the trick.

As did adding ochre opaques (just visible in the first photo) and a bright yellow cardigan, to which I pinned a brooch with a mottled orange and green stone.

As if to taunt me, the sun starting playing hide-and-seek as soon as I was on my way home, and by the time I'd reached my stop and was getting off the tram, she'd packed her bags and left. 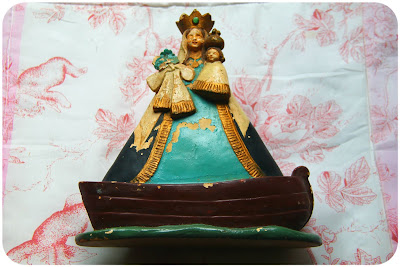 Jos was picking me up in the car, but instead of going straight home, we made a detour via the local charity shop, which we hadn't visited in a while.

I found this worse-for-wear Madonna and Child figurine hiding at the back of a shelf, and as I picked it up for closer inspection, I was intrigued to see that dear Mary seemed to be perched on top of a boat. This lead us to believe that she is Stella Maris, or Star of the Sea, protector of seafarers. The paint was peeling in various places but we as we thought her rather charming, we took pity on her, and after paying a pittance of € 1,20, we took her and her baby home. 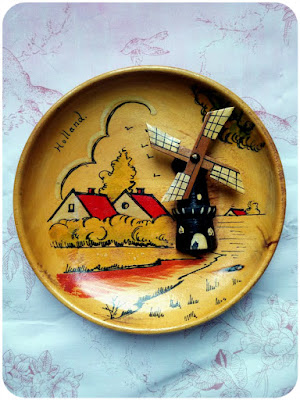 While I was browsing the clothing aisles, not finding anything that even remotely tickled my fancy, Jos found this wooden wall plaque, a souvenir from Holland, complete with little windmill.

As we already have a modest collection of these brightening the wall of our entrance hall, it would have been silly to deny it the pleasure of joining the gang! 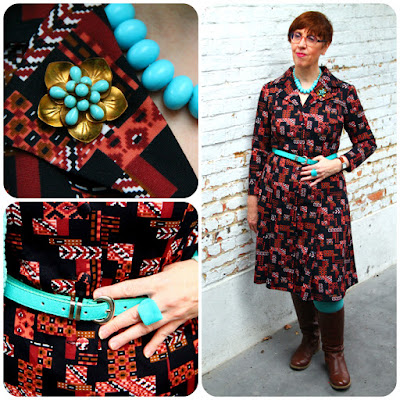 Saturday turned out to be yet another one of those dull, damp and dismal days, when even a dash to the garage to pick up our car feels like too much effort.

But needs must, and as we were sure a rummage would be beneficial for our moods, we dragged ourselves from the sofa, grabbed our coats and umbrellas, and went off.

I was wearing a button through black printed frock with a notched collar, which for some reason had been greatly neglected in previous years. It's printed with what looks like tiny scraps of patterned fabric in various shades of brown mixed with a bit of white. 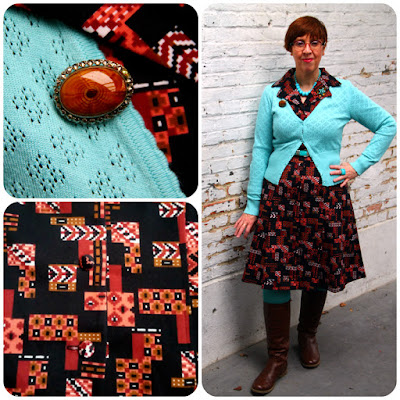 Lovely though it is, it badly needed a further colour injection and turquoise was the one which immediately sprang to mind.

I used it for my cardigan and opaques, as well as all my accessories, consisting of a belt, necklace, ring and brooch.

A second brooch, its centre doing its best to emulate a piece of wood, was pinned to my cardigan. 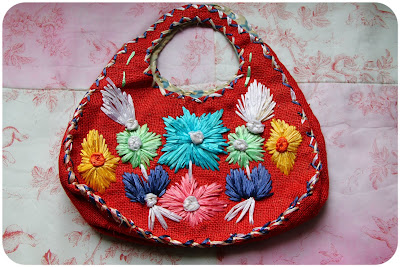 The charity shop of our choice is one we visit regularly, but can be a bit hit or miss. Lately, it has been the former, and this time was no exception, as I soon happened upon this gorgeous red hessian bag embroidered with raffia flowers.

Then there were a couple of skirts, both handmade and - I suspect - having had the same previous owner.

Here's Angelica doing the honours of showing them to you. 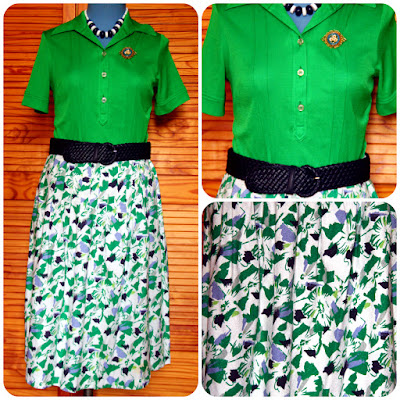 The first one, in a textured cotton fabric, is unlined and softly pleated and, with its fresh lilac, green and navy print on white, is the epitome of Spring.

Angelica was happy to wear it with a green fine knit Crimplene top, a navy woven belt and a navy and white beaded necklace. 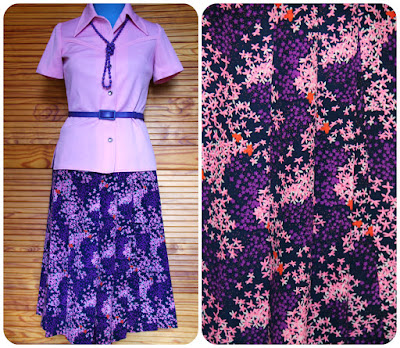 The second skirt is fully lined and made from a light viscose fabric, featuring purple and pink florals and the odd splash of orange.  A pale pink polyester blouse and purple accessories completed Angelica's outfit.

Happy with my finds, we made our way home, but not before stopping at the charity shop in our village. Here, I was seduced into buying a funky jacket by posh Belgian label Caroline Biss, which was launched in 1987, when a first dedicated shop was opened in Antwerp. Not one I've ever set food in, mind you, as I certainly wouldn't want to spend over € 200 on a jacket! 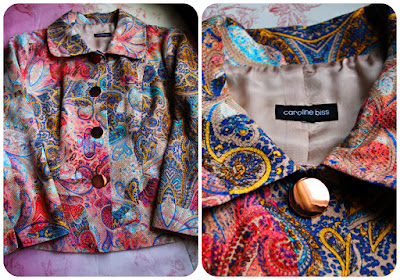 The jacket in question, in a boxy shape which normally doesn't suit me, but now miraculously does, looks virtually unworn. Still, I initially dithered as I absolutely hated the shiny gold buttons. But replacing buttons is an easy fix, especially with a stash of vintage buttons at my disposal, so the dithering didn't last all too long! Apart from its fabulous print, the jacket has pockets, so it would have been downright silly not to buy it. 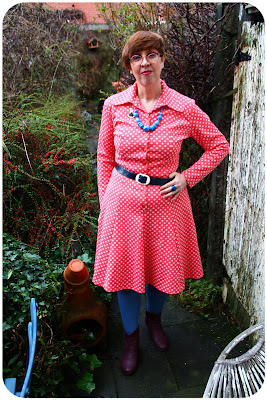 Sunday's diary page was completely empty, and would have been the perfect opportunity to go for a walk, if the devilish weather deities hadn't played spoilsport once again. With torrential rains our lot for the day, it even took until late afternoon before it stopped for long enough to nip into the garden for outfit photos. 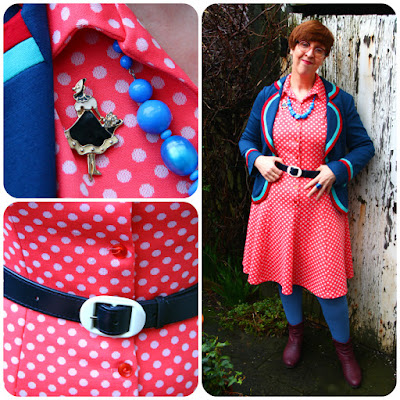 My coral polka dot fit and flare frock is an old favourite from Think Twice, where I picked it up many years ago. Looking back at past blog posts, I always seem to be wearing it with blue, which I repeated by adding bright blue opaques and a beaded necklace in a similar colour.

The navy, white buckled belt used to belong to my Mum, the same colours appearing again in the brooch, one of February's flea market finds, which I pinned to the dress.

The jacket, from the Spanish Kling brand, was charity shopped back in January, and I thought I might as well wear it instead of a cardigan. 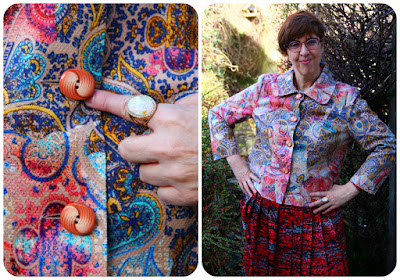 Before I sign off for now, I'm returning briefly to that other charity shopped jacket. As you can see, I soon found the perfect set of buttons to replace those shiny monstrosities. So much better, don't you think?

Linking my blue sky and yellow sunshine outfit to Nancy's Fancy Friday. Do go and check her out!