Everything depends upon how near you stand to me

Like a virus, fear is contagious. Perhaps even more so. It spreads like wildfire, as neither social distancing nor quarantine can stop it. It worms its way inside your head until the outside world feels like an alien country full of potential predators. It eats you up and then spits you out in tiny little pieces: a jigsaw of what once upon a time was you. Several pieces seem to be missing so that you cannot make yourself whole again. Fear makes you want to flee - which is virtually impossible in this current crisis - or fight. But it seems you're fighting against giants. Only when you realize they are actually windmills will your heartbeat finally slow down.

So I'm giving the middle finger to all those who are kindling fear with gloating gusto. I'll be banishing their black-hearted messages by wearing colour. Lots and lots of it, so there! I do hope this will make them crawl back under their rocks! And as for those at the other end of the scale, who still haven't got the message and keep putting others at risk with wanton abandon: may you all be turned into pillars of salt.

But even if things are looking bleaker than ever, and if I certainly do not always feel like practising what I'm preaching: we mustn't give up, and keep on aiming for that light at the end of the tunnel. 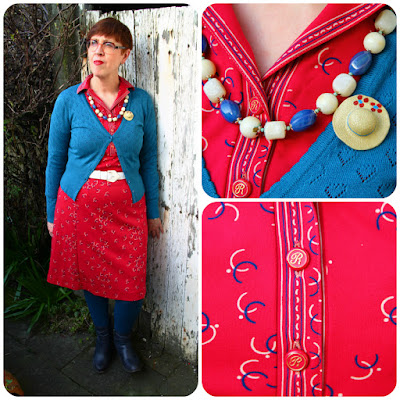 The 16th of March was the start of our first week of semi-lockdown and the day of my last journey by public transport. Schools had closed, so that I was absolutely fine in the morning, having an unprecedented amount of space on the tram.

I was wearing a seldom worn red vintage dress liberally sprinkled with blue and white crescents. There are blue and white stripes at its yoke as well, which has three buttons proudly bearing an R. The R is short for Romy, as that's the name mentioned on the dress's label, which is also bearing a picture of the Eiffel Tower, giving it a certain je ne sais quoi.

The dress's classic red, blue and white colour scheme was reflected in my choice of accessories, as well as my cardigan and tights. Even my blue ankle boots came out to play! 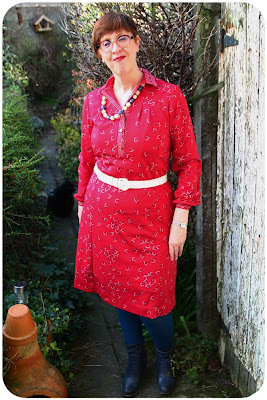 Back to that fateful Monday. Non-essential shops were still open - they would be forced to close for the duration on the 18th - and by midday it was fairly crowded in the city centre. I fled back to the office in disgust when, out for a breath of fresh air, I was almost overrun by people carrying Primark shopping bags. People who obviously had to go home when I did. That evening, Jos and I made the wise decision that he would take me to work and pick me up again by car, which went a long way in reducing the fear factor. 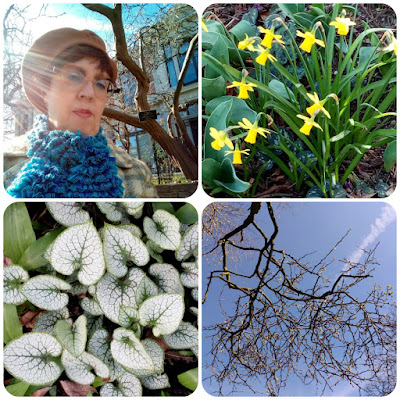 Our car journey to work takes us past Antwerp's botanical garden. In spite of this being a less than ten minute walk from my office, I hadn't been there in years, so on Tuesday I took advantage of the gorgeous springlike weather to head there during lunch break.

There were only a handful of people about, all keeping the appropriate distance and, after walking around to see what was in bloom, I sat on a empty bench luxuriating in the sunshine and indulging in a couple of minutes of normality. 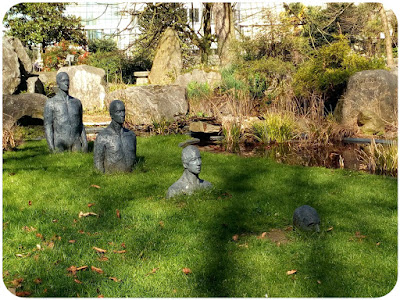 Apart from plants, there's some art dotted around the garden. These are by sculptor Monique Donckers, and called "Greening II". When I was looking it up on the Internet, I came across some photos taken in Summer, when grass was allowed to grow around them, almost obscuring the last one. I'll have to go and photograph them again in a few months' time, hoping that by then all of this is only a bad memory. 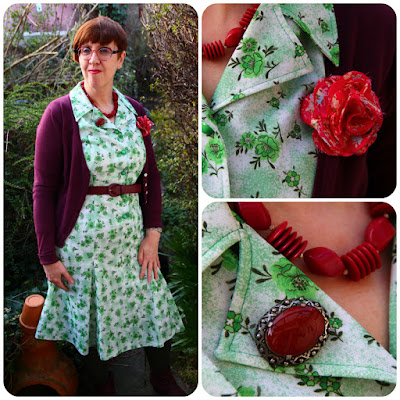 This is another of that week's outfits. Now that the days are getting longer there is once again opportunity to take outfit photos after work.

This classically shaped, box pleated frock, with its green flowers on a white and mottled green background, was another one which was long overdue an outing. I chose a medley of red and burgundy to accompany it.

I didn't feel like venturing out again during lunch break that week. To be honest, I was finding the routine utterly exhausting: putting on latex gloves to take the elevator to the ground floor and opening the building's front door, then getting rid of the gloves and get out the hand sanitizer, and then having to do it all again coming back in. As I was once again putting on gloves, I started humming the song Hand in Glove by The Smiths, stopping short when I came to the line which became the title of this post. How very, very apt. Never mind that it is preceded by the line "we can go wherever we please"! 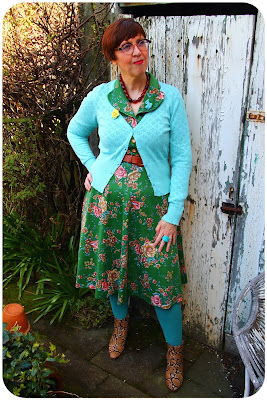 Saturday dawned bright and sunny, even if a stinging wind did its best to throw a spanner in the works.  I was feeling surprisingly chipper that day, which was greatly helped by wearing one of my favourite ever frocks. The green 1940s style dress with its blowsy flower print originally had cheap looking plain white buttons which once again I replaced with more likely candidates from my stash. 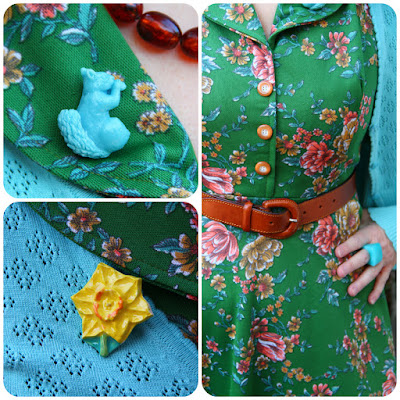 In my opinion, blue and green should certainly be seen, so I added a sky blue cardigan, squirrel brooch and ring to accompany the blue flowers in the dress's print.

Further accessories were a tan belt and translucent beaded necklace, and I pinned a Welsh daffodil brooch to my cardigan in honour of the first day of Spring.

Teal opaques and my snake print ankle boots completed my outfit. The latter were only worn for the photos, though. 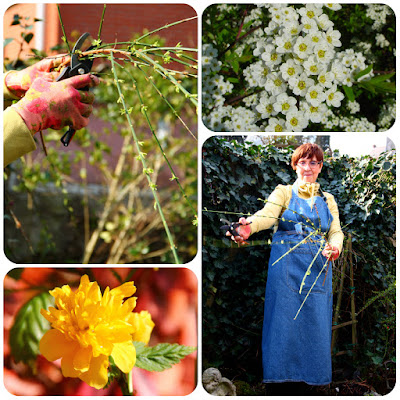 When the rays of the sun started pouring into our little walled garden, I exchanged my outfit for an old pair of jeans, pale yellow top and denim gardening apron for a spot of heavy duty pruning.

We cleared an area of some of the rampant ivy and the dried remains of last year's ferns, and pruned our winter jasmine within an inch of its life.

Having lost our winter flowering Clematis armandii, as well as its host plant, our long suffering lilac, there's not much in flower yet, apart from the yellow flowers of our ineradicable Ranunculus bush and the frothy sprays of white Spirea flowers. 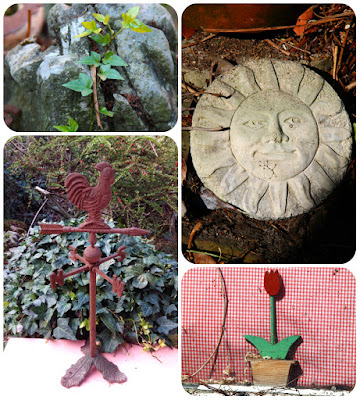 Our cast iron weather vane appeared from under a mound of ivy, and I accidentally knocked our stone sun plaque from our garden wall. No harm done, though, and she, as well as the weather vane, are currently awaiting new spots.

Meanwhile, Jos had been tackling the remains of the dead lilac, so that we can now see the shed at the back of our garden from our kitchen window. I'd almost forgotten the makeshift gingham curtain and the row of wooden tulips I put up many years ago to cheer things up. 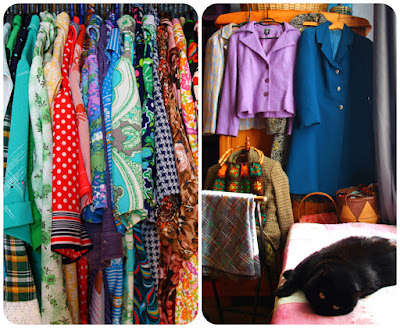 Still in a good and productive mood, I then put away my warmest Winter coats and dresses, exchanging them for the first batch of Spring stuff, a task made much lighter with the help of you know who! 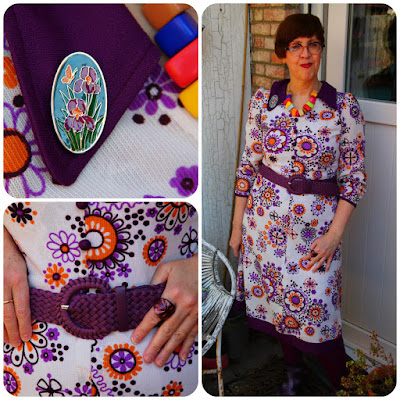 We'd intended to continue in the garden on Sunday but, although it was looking gorgeously sunny, the wind had turned decidedly icy and unpleasant, which kind of put paid to our plans.

In the end, we only stepped into the garden to show you my outfit, which was based around another dress I hadn't worn in years.

It's a handmade one, with three-quarter sleeves with elasticated cuffs, and a slightly psychedelic flower print in orange, lilac and purple on a white background. 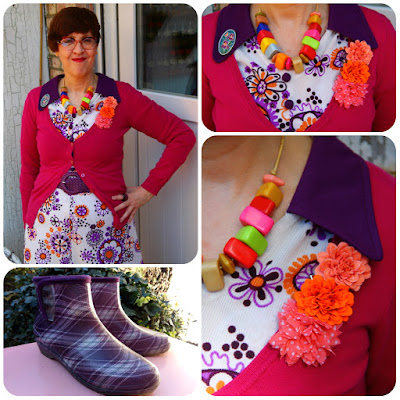 I pulled out all the stops by accessorizing it with a purple woven belt, a fuchsia cardigan to which I clipped a row of flower hair clips, a multi-coloured wooden necklace, and an enameled Iris brooch pinned to my dress's collar.

I was wearing the ankle wellies I picked up at a charity shop back in December and which have been a godsend for my gardening activities.

In the week that followed, I had quite a few wobbles, and as it now seems that starting from next week I will be on reduced hours, I will have to find a new routine to keep my mind out of mischief.

Meanwhile, I wish you all well, and hope to see you in my next post!

Posted by Polyester Princess at 19:47