Now, don't get me wrong. I do appreciate this Summer bonus time we've been having as much as the next person, but it's been playing havoc with my schedule!

Especially as I had taken October's first Friday off to do my wardrobe changeover. Outside, the sun was doing overtime, but here I was, lugging around mountains of clothing and getting sweatier by the minute.

I'd already packed away all the high Summer stuff in the two vintage suitcases it usually hibernates in.

Then, I freed up valuable hanging space in my main wardrobe by making neat piles of my other Summer clothes, ready to be put into the vacuum bags which would soon become vacant. 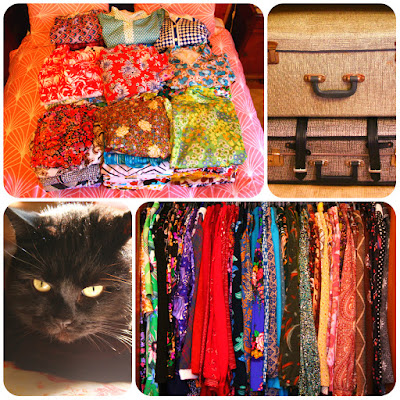 Then, out came my Winter frocks! I checked over and gave thought to each and every one of them, making piles of anything I'd fallen out of love with, ready to be donated to charity or for re-selling at next year's flea market. These made a total of four bags of clothes, and I was feeling quite pleased with myself.

Meanwhile, my little helper, Phoebe, was getting sleepy and soon dozed off in the sunshine. 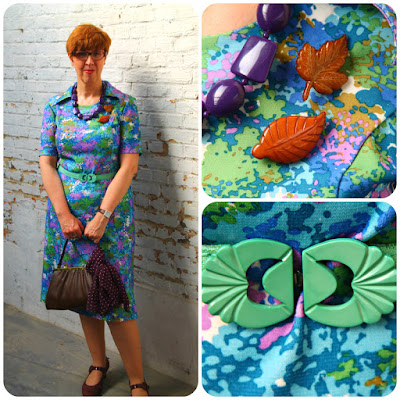 All that schlepping around had done my back in, so that by Saturday I was good for nothing.

We were off to see an exhibition of Expo 58 items put up by an acquaintance, and with the temperature in the mid twenties, I actually needed something summery to wear.

Now this was a dilemma! As all my Summer stuff was having its annual beauty sleep by now, I was left shipwrecked between Summer and Autumn. The best I could come up with were a handful of transitional short-sleeved Crimplene frocks, which I'm keeping in my wardrobe, ready for next year's first days of Spring. 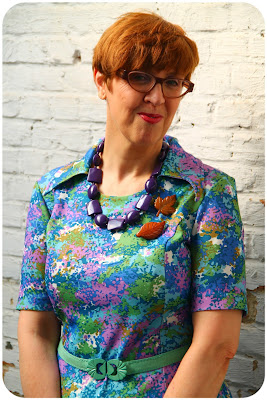 At least, this one looks sufficiently Summery, don't you think? I made the most of its riotous colour scheme by adding a purple beaded necklace and a green belt. The belt actually belonged to one of the dresses I gave to charity. While I was prepared to let the dress go, as I never wore it anyway, the same couldn't be said for the belt with its gorgeous buckle!

As a nod to the season, I added some Autumn leaves brooches. 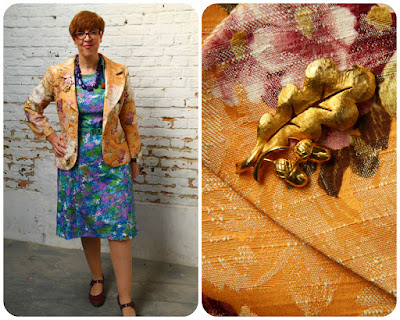 I last wore this floral tapestry blazer back in Spring, but I do think it's equally suited to an Indian Summer's day. Another autumnal brooch was added for good measure. This gold tone one features a sculpted oak leave and two acorns. 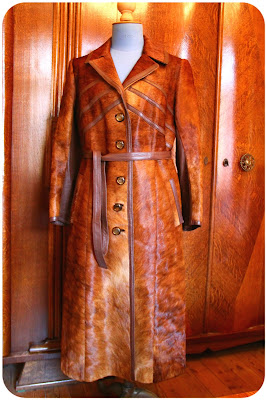 We had just time for one charity shop on the way home, nipping into our most local one, where I found this amazing coat. There is no label identifying its contents but its heavy weight might be an indication that it's the real thing. I just knew I'd have regrets if I didn't take it home. 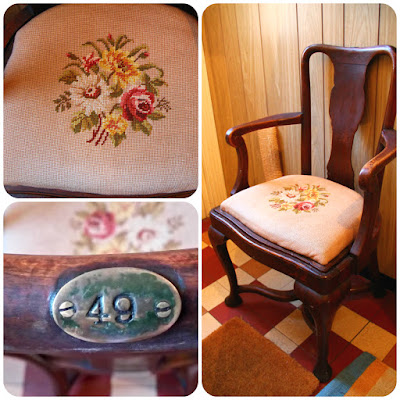 Another thing which came home with us is this chair. It is one of a pair and has been living in our garage for a couple of weeks now. It's a family heirloom from Jos's side, Jos and his sister having one each. At some point, after Jos and I had not long been together, Jos's sister offered to re-upholster ours in the same way she did hers, and that's the last we saw of it.

After his sister passed away back in August, we have now inherited both chairs, the other one needing some minor repairs before coming home.

They are rather special, as they used to be part of the furniture of a ship called the Baudouinville, which was built for the Antwerp based shipping company Compagnie Maritime Belge in 1939. She was a passenger ship operating between Antwerp and the then Belgian colony Congo, but was captured by the Germans in 1940 and anchored in France for the remainder of the war.

As indicated by the numbers screwed on top of the chairs' backs, they were used in the ship's theatre. 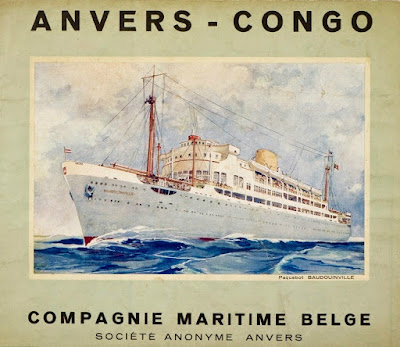 After the war, the by then fire damaged ship was towed back to Antwerp and dismantled. The chairs, together with some other bits and bobs, were salvaged by Jos's Dad and eldest brother, who used to work in a ship-breaking yard just after the Second World War. 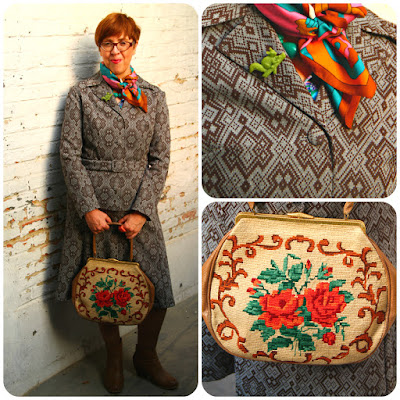 I was feeling more or less back to normal on Sunday, which was a good thing as we had our first indoor flea market of the season to go to.

There was a little nip in the air, so I decided to give one of my lightweight suits an outing. This brown on grey textured polyester suit was all mine for the incredible sum of € 4 in one of Think Twice's sales a couple of years ago. It made its debut soon after I took my first baby steps in blogland, here. 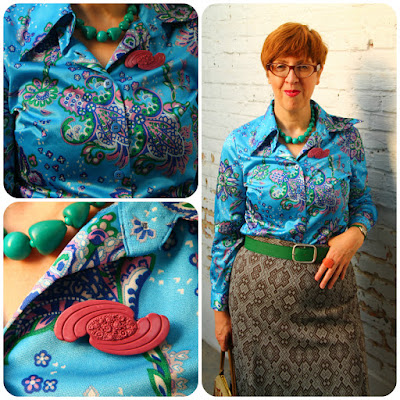 For my top I kept to a similar shade of blue as I did back then, as I think it works really well with the suit, but I'd never have dreamed of mixing prints at the time!

There's green in the blouse, which I matched with my necklace, belt and squirrel brooch pinned to my jacket, while the pink bits prompted my choice of brooch on the blouse itself.

Finally adding one of my tapestry handbags, I was ready for the hunt. 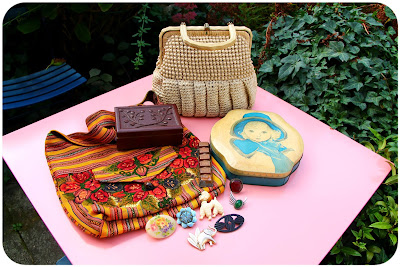 And this is what we came home with! 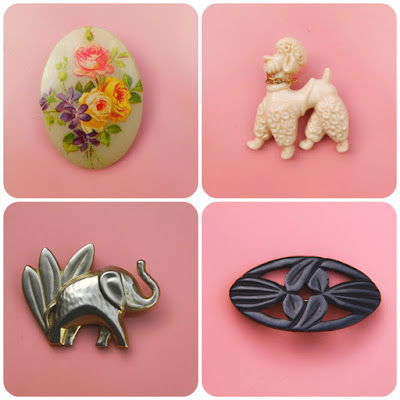 It's been ages since I had a decent haul of brooches, so I was glad to add a total of six to my collection. 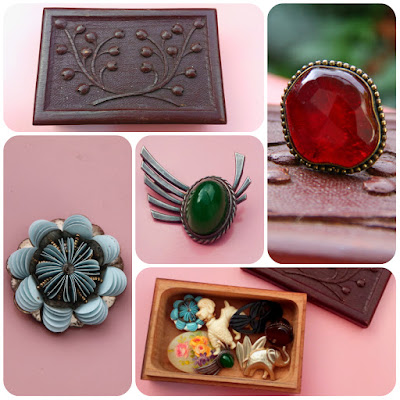 The irregularly shaped amber colored stone belongs to a chunky ring, and my treasures all just fit into the decorative wooden box I found at one of the stalls. 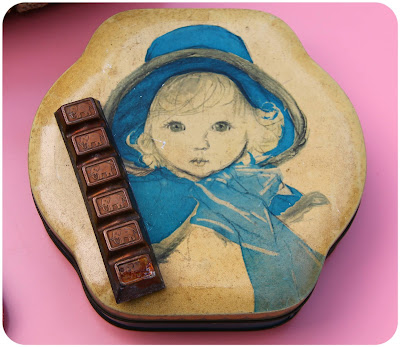 Two chocolate related items, both from Belgian chocolate brand Côte d'Or: a gorgeous tin which used to contain chocolates and a chocolate mould for the brand's iconic chocolate bars featuring an elephant, the brand's emblem, on each piece. 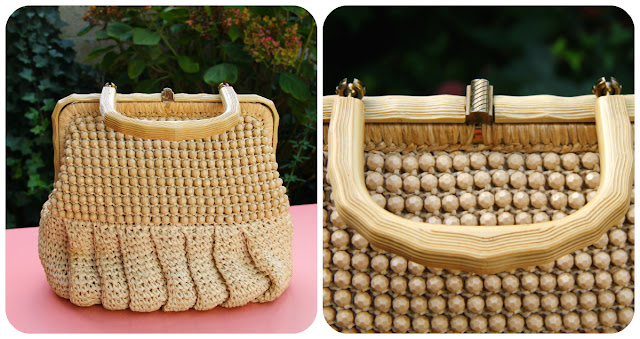 I've been a good girl and haven't bought any handbags for ages. Plus, I sold a couple of handbags at the flea market back in July. Not enough to free up sufficient space for new buys, but still ...

How could I leave behind this vintage raffia beaded handbag. Its ridged framework and handle, which I suspect are Bakelite, do need a bit of a clean, though. 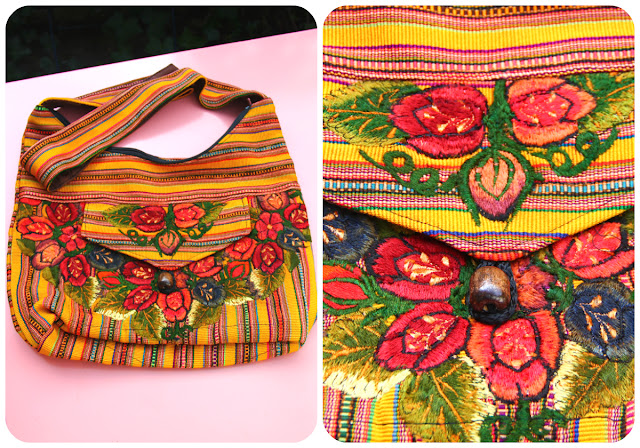 My last find was actually my first. I was immediately drawn to the gorgeous colours of this embroidered canvas bag, which closes with a zipper, is fully lined and has an envelope-shaped outside pocket closing with a loop and wooden bead.

All in all, not too bad for the first flea market of the season, which wasn't operating at its full capacity yet.

We have once again taken out a subscription and will be returning soon!

Meanwhile, I am linking my suit to Patti's Visible Monday at Not Dead Yet Style!