Walking up that hill

We're more than halfway through October, and I've just realized I still owe you the last episode of my travelogue of our week's holiday back in September.

So, let's get started with what I was wearing as usual. You might have noticed that I did make a point of posing for outfit photos on our little balcony each morning!

This was the second day that the sun was already there to greet us when we got up. However, the temperature had dropped quite considerably and even if the wind had died down by now, it was rather chilly out there. 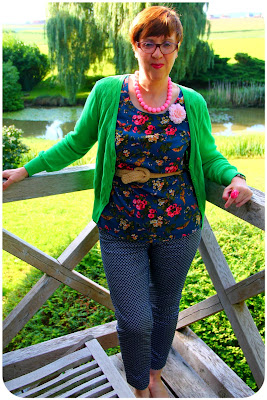 I'd already worn my trousers a couple of days earlier, but here they are again. Styled differently, obviously. I'm including a close-up of their print, as I was asked by Tina whether I was wearing denim when I first wore them. They're from this Summer's H&M sales and the same style as the floral pairs I picked up at the same time.

My long-sleeved top with its profusion of Summer flowers on a cobalt blue background, was a charity shop find and, as it is rather loose-fitting, I added a hessian belt - also charity shopped - to define my waist.

A chunky pink ring, beaded necklace and flower corsage completed my outfit. Oh, and I added a green cardie on top. 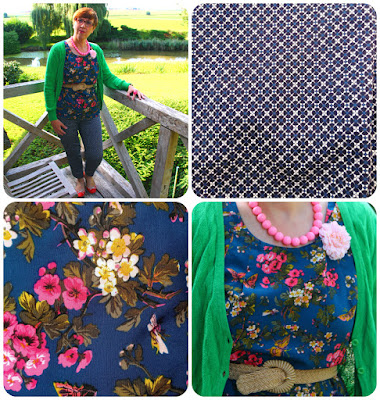 The weather forecast promised another dry, if cloudy, day, and we had plans! I'd printed a seven kilometer walk off the Internet, in the hilly country to the south of Poperinge, called Heuvelland (transl. Land of the Hills), which would skirt and climb the hill Kemmelberg. While the word berg is Flemish for mountain, these are all just hills really. In a low country like Flanders, anything bigger than a molehill is already considered a mountain!

Imagine our disappointment when, arriving at our destination, we found the village square and surrounding streets fenced off due to a cycling event. Even in the unlikely event that we would have found a parking spot, there was no way we were going to risk getting run off the road by a bunch of doped up cyclists!

Consulting our walking map, we decided to drive in a westerly direction and go for a walk on another hill, the Catsberg. If this conjures up a hill full of cats, then I have to disappoint you, as the name is derived from a Germanic tribe, the Chatti. 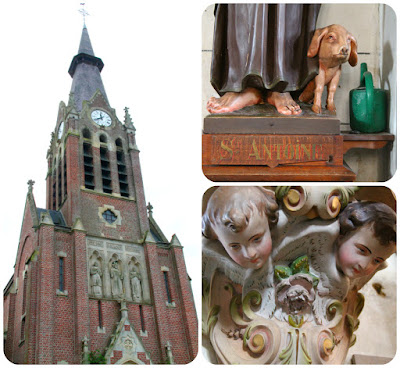 And so it is that we found ourselves in France by accident!

The Catsberg or Mont des Cats is situated near the village of Godewaersvelde, its Flemish name indicating that historically this was part of Flanders, but now lying just over the border with France. 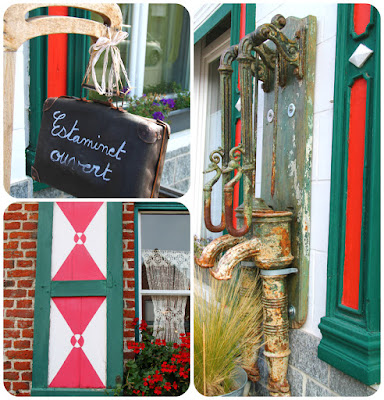 In order to get our bearings, we stopped and strolled around the village, which is classed as a Village Patrimoine, a traditional village of historical interest. Godewaersvelde is a typical border village, and its economy used to thrive on its proximity with Belgium, when there was still a border as such.

We explored its picturesque streets with taverns on virtually every corner, and visited its church built in the neo-Gothic style in 1906.

Intriguingly, the book sharing box (below, bottom right) contained a copy of the London A-Z! 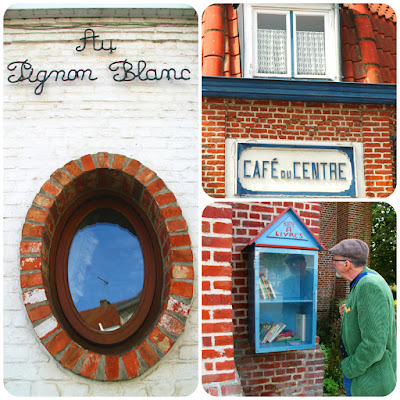 We came across a road signed to the Catsberg, but before rejoining our car, we had a fortifying cup of coffee in one of the village's taverns, Het Blauwershof. Once again, this is a Flemish name, suggesting that this used to be the haunt of smugglers, who are called blauwers in the local slang. 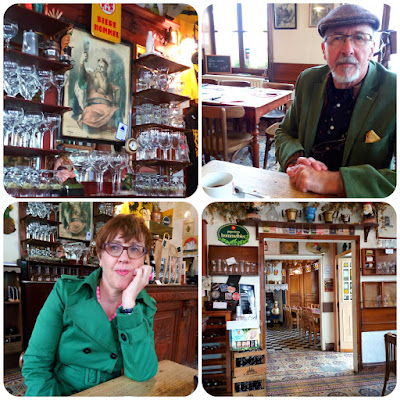 Following the signs, we then proceeded up a winding road ascending the 150 meter high Catsberg until we reached its highest point where a splendid panorama of unspoilt countryside awaited us.

Here we parked our car and ate our picnic sitting on a bench and admiring the view. 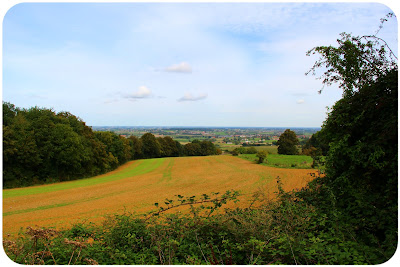 On top of the Catsberg is the abbey of Sainte-Marie du Mont, dating from 1825, where cheese and beer is still produced by Trappist monks.

The abbey's buildings are partly hidden from view by high walls, and can only be fully admired from a distance. 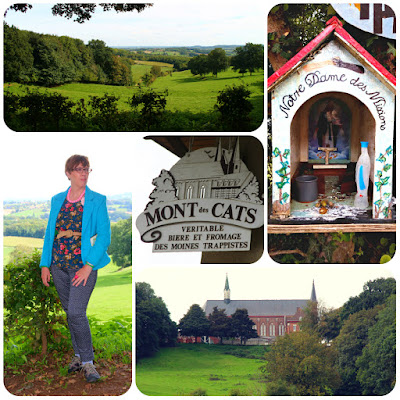 After lunch, we decided to do the shorter of the indicated walks, the Balade des Katts, for which pink signs had to be followed. Should be a doddle, no? 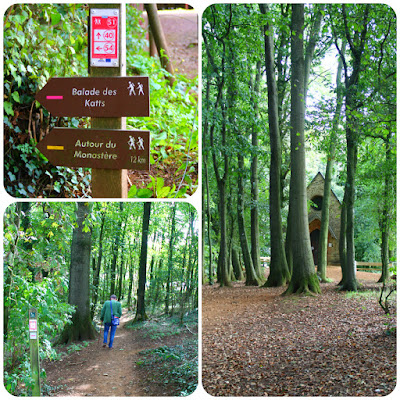 The walk started by a descent into the wood, which is called the Heremietenbos (Hermit's Wood), and where soon a little chapel could be glimpsed between the trees.

A mossy sign told us that this was the Chapel of the Passion, dating from 1857. This is a so-called "fever chapel" where people came to pray for the healing of the sick, leaving behind pieces of cloth and tissues belonging to those who were unable to make the journey. 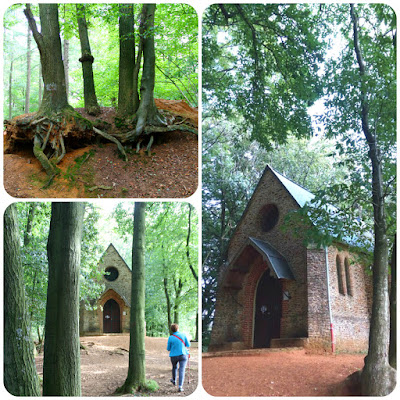 Disappointingly, the chapel doors were firmly locked - possibly to avoid the spreading of disease on account of all those tissues! - but there was a grimy porthole through which we could see its interior and make a hazy photograph. 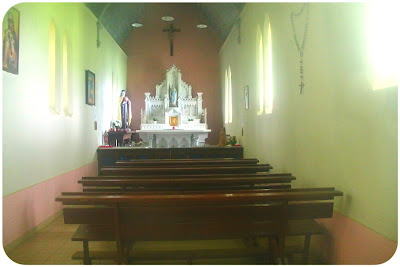 Having long lost the pink signs by then, and with paths leading in every direction, it was inevitable that we took a wrong turning, ending up in a field with a 200 meter television transmitter.

On a clear day, the transmitter is visible from our cottage's balcony, and even more so after dark, when it is lit up with a row of blinking red lights. 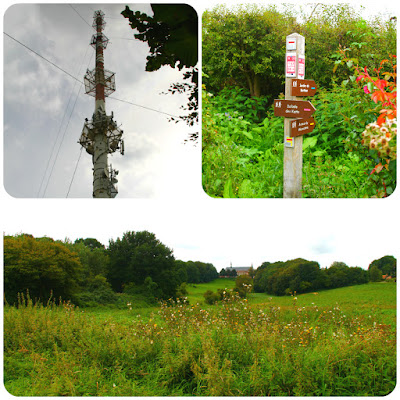 Finally, we found a pink sign among the profusion of way markers, and we were back on track on a path through the woods.

Shortly after emerging from the trees, we joined a tarmacked lane from where we could see the abbey lying in the distance across the valley. 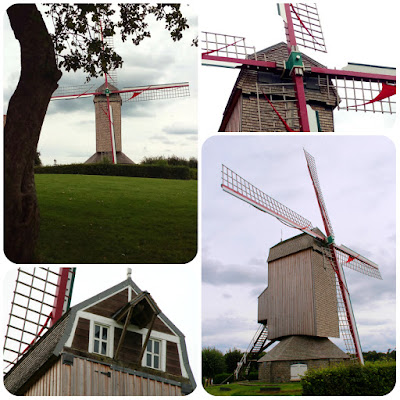 Having finished our circuit and made it back to our starting point, the day wasn't over just yet.

On our return journey to Poperinge, we stopped at another French border village with a Flemish sounding name: Boeschepe.

This sleepy village's claim to fame is its magnificent post mill, the Ondankmeulen (yet again an old Flemish name), which dates back to 1802.

We have, in fact, been here before, back in 2013. At the time of our visit, on a blisteringly hot day, we met two village officials, the older one still speaking the peculiarly old-fashioned sounding version of Flemish (or Vlemsch, as opposed to Vlaams, which is what we speak) which used to be the prevailing language here.  We talked with them about the mill's deterioration and their plans for funding its restoration, so we were happy to see a sign mentioning that the mill was restored in 2016. 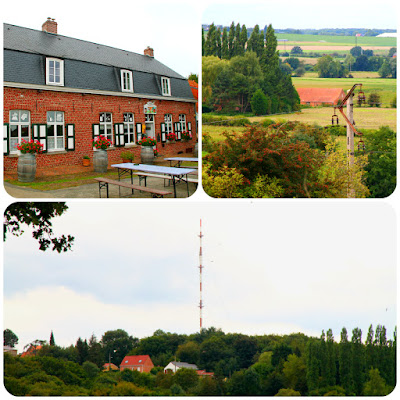 Next to the mill is another tavern with a Flemish name (De Vierpot), and from the grassy field surrounding the mill, the transmitter on top of the Catsberg could clearly be seen.

We were feeling a bit wistful, as one does on the last day of one's holiday. This rang especially true this time, as at that point we weren't sure whether we would ever be able to return. 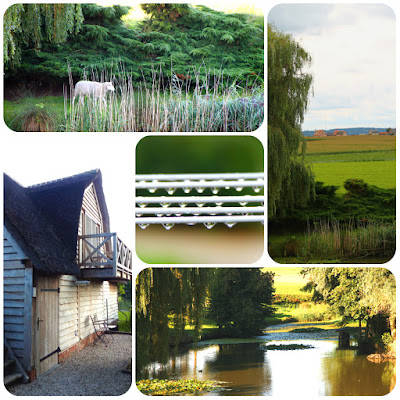 Now that we know that we probably will, looking at all the photographs we made while sitting on our balcony isn't all too poignant. 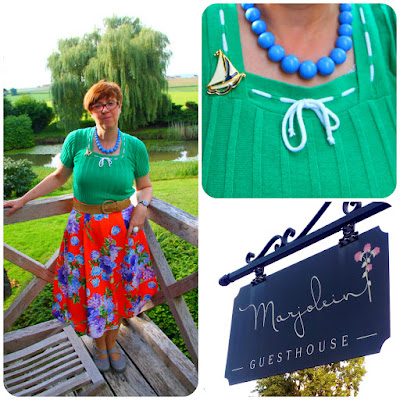 On our last morning, before packing up and driving home, there was time for one more photo session.

I was wearing the skirt I'd arrived in but added a different top this time. My short-sleeved nautical style jumper, originally from Belgian label Who's That Girl, was a lucky charity shop find. I have it in navy too.

So, it is goodbye but not farewell to our lovely little thatched cottage. Hope to see you again next September!

Linking my walking outfit to Nancy's Fancy Friday. Do check it out!
Posted by Polyester Princess at 19:37