Nothing new under the sun

The weather continued to be unseasonably warm into the second week of October (and beyond!) and thus short sleeves remained the order of the day.

The Crimplene frock I'm wearing here was recently found for € 4 at Think Twice, who were having yet another one of their famous sales.

It's been a while since the shops yielded anything even remotely interesting as lately most of their stock is predominantly 1980s leaning toward the - gasp! - 1990s. Not exactly my thing! 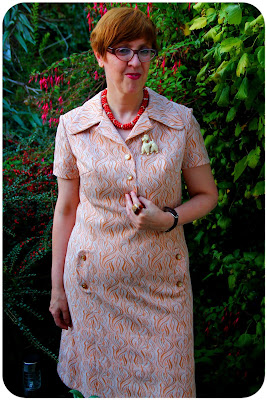 I know from experience that it pays to have some patience, as it's usually during their sales days that the really interesting stuff is starting to appear on their rails. As most of the bright young things frequenting the shops do not seem to care one jot for anything 1970s or earlier, the shops consider these only worthy for being sold at ridiculously low sales prices. Which obviously is fine by me!

The days when everything sells for € 4 are my favourites, as it's then that I usually luck out. After that, in the final days when prices go down to € 2 and then € 1, chaos reigns, with heaps of discarded clothing everywhere and endless queues at the totally inadequate two fitting rooms. 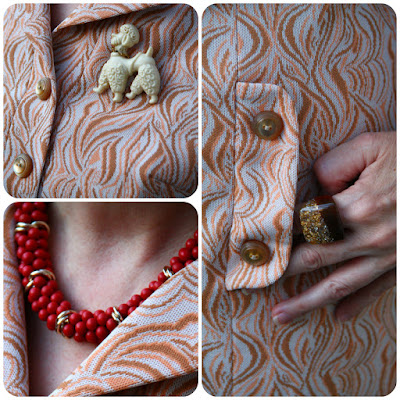 I zoomed in to this Crimplene mod dress with its groovy print and vertical pocket tabs with chunky buttons the minute I walked in. I wasn't going to brave the queues, but judged it was my size and took a chance. I must say I'm getting to be quite good at measuring with my eyes!

You might recognize the poodle brooch, as it's from my latest flea market haul. The necklace, which looks as if it was made of holly berries, was charity shopped, while the glittery plastic ring is an old retail buy. 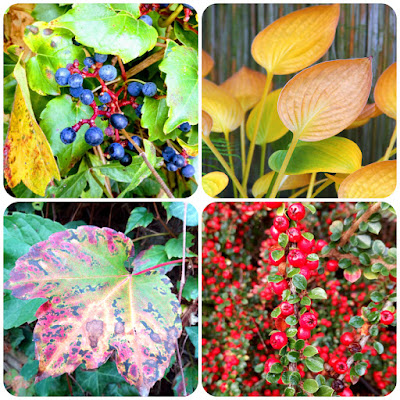 On second thought, the necklace's cluster of little red beads are quite reminiscent of the Cotoneaster berries which currently seem to put our garden on fire.

They are competing with the slowly diminishing blooms of our Fuchsia magellanica bush. You can see both of these garden champions as a backdrop for some of the outfit photos in this post.

The perennial plants in our garden have started their slow process of decay, gladdening the heart with their spectacular Autumn colours, before dying and feeding the soil for next year's growth. 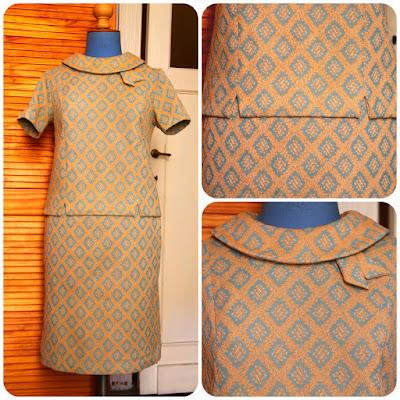 But let's show you some more of my Think Twice finds.

What about this Crimplene two-piece? At first sight, you might be forgiven in thinking it's a dress, but it's actually a skirt and top. Again, I was initially drawn to its funky print, but on closer inspection, I was even more smitten. The skirt is just short of a pencil shape, without being too tight fitting. And then there's the top! What can I say? It closes with a back zipper, has two little slits at the front for additional comfort and a rolled collar finished with a little side tie. I'm swooning! 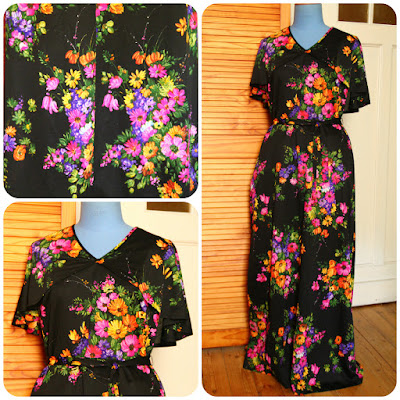 If the explosion of colourful flowers in the print of this maxi frock wouldn't have been enough to convince me it had to come home with me, then the attached little capelet would certainly have clinched the deal. 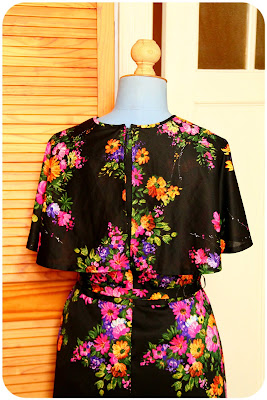 Here's a peek at the back to see the capelet in its full glory! 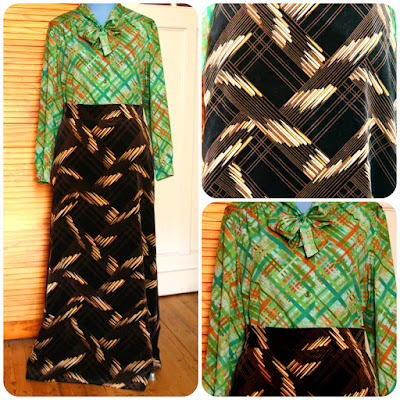 This deliciously strokable chocolate brown velvet maxi skirt, with its eye-catching print, is waiting for the perfect Winter's day, when I'll be grateful for its warmth. When that day comes, I might be wearing something warmer on top but for now, I thought this plaid print pussy bow blouse, an earlier Think Twice find, looked perfect with the skirt's almost holographic print. Even my camera lens got a bit confused when I tried to capture it. 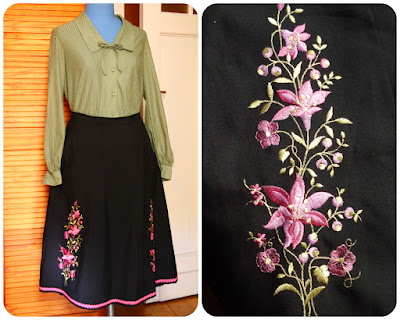 My penultimate find was a black circle skirt, which looks virtually unworn. It shouldn't come as a surprise that it was the pink rick rack at the hem and the two panels of green and pink embroidered flowers which piqued my interest! 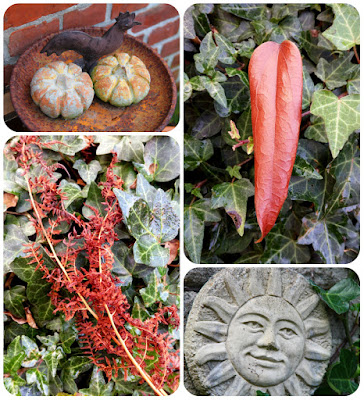 I was trying to make the most of the early evening sunlight and pose for outfit photos in the garden when I got home, but the truth is that on some days I have just enough energy left for kicking off my shoes and flopping down on the sofa.

October tries to trick my mind into thinking it's still Summer, but failing miserably, in spite of regaling us with temperatures in the high twenties. 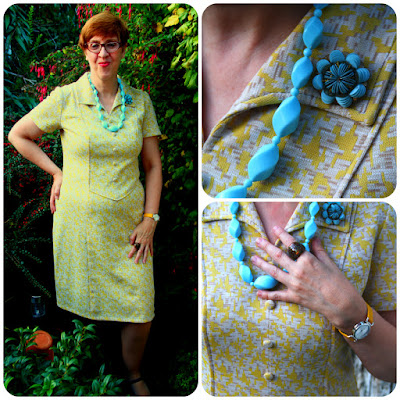 Amid the juxtaposition of Summer and Autumn, I am wearing yet another transitional short-sleeved dress, in jersey polyester this time. The low but dazzling evening sun almost bleached out the yellow, but I included some close-ups for a better look at the print.

And what better than blue, the very colour of the late Summer sky, to accessorize it with? The brooch is once again from my latest haul. I've been trying to wear them all before storing them away in my brooch boxes. 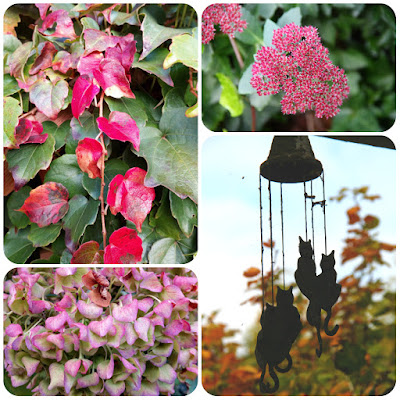 More Crimplene on Friday. It's been a while since I last wore this olive textured polyester shift dress. Last time, in October 2016, I combined it with pink, but now I took the cue from the two brown buttons at its dropped waist to wear a beaded necklace in the same colour. 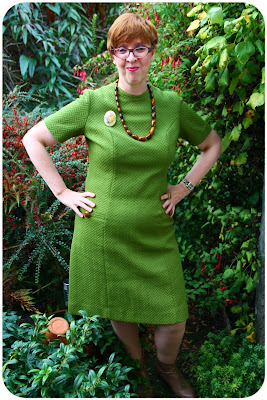 I pinned on yet another of my latest brooches and wore my leopard strap watch! I keep hearing that animal print is all the rage now. Could I possibly be on trend? That'll be the day! 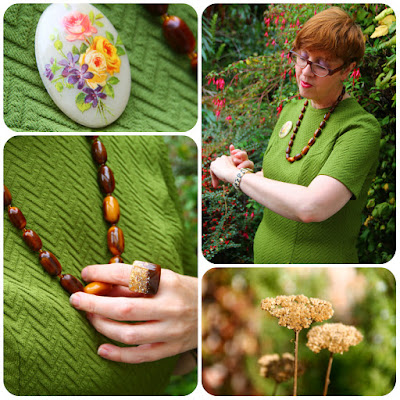 And here's the last of my Think Twice finds.

I can safely predict I'll get a lot of wear out of this 1970s zippered denim jacket sprinkled with embroidered flowers. After having had its first outing, it has now been stashed away until next Spring, when I'm sure I'll be happy to see it again. 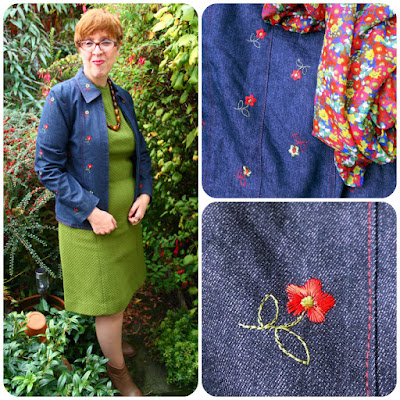 As it was a tiny bit chilly in the morning, I left the house wearing a floral print red scarf, tying in with the red blooms on my jacket. 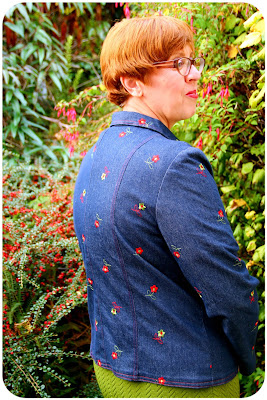 So, that was my fashion fix for that week. A guilt-free and environmentally sane fashion fix, I should add, as there's nothing new under the sun here!

In other news, we have booked another little trip somewhere in November, so there will be another travelogue coming up soon!

Meanwhile, I am joining Tina's Pink Friday linkup Party with my olive and denim outfit!
Posted by Polyester Princess at 19:40