It was on the Friday of our holiday week back in September (can't believe it's already one month ago!) that we were finally greeted by the sun.

Drawing back the curtains, we were met by a sun-drenched landscape as far as the eye could see, even if the hills we were supposed to see in the distance were still obscured by a haze. 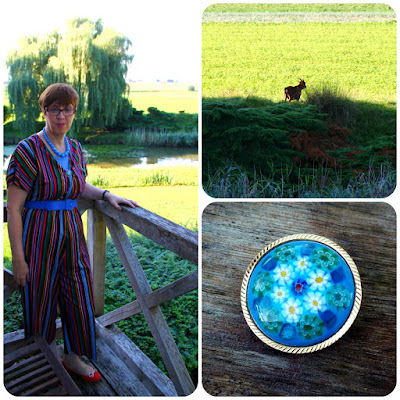 Neither a dress nor a pair of trousers were my outfit of choice that day: I'd brought a jumpsuit I'd bought from New Look, and I thought it was about time we went out together!

I used the scarf clip on the bottom right, with its exquisite Millefiori design, for modesty purposes, even though I was wearing a tee shirt underneath. With so many colours to choose from, I picked out blue for my accessories which, apart from the scarf clip, consisted of a belt, beaded necklace and ring.

If you look sharply, you can see I'm being photo-bombed! The tiny figure on top of the ridge where the dark green of the shrubs and the bright green of the field meet is actually the resident goat! Can you spot it? 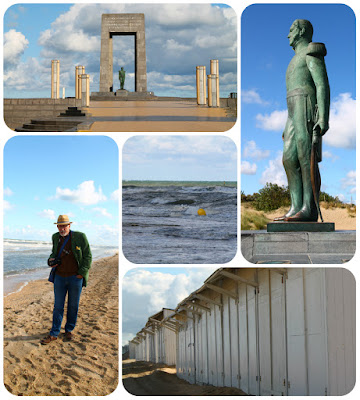 Not having had our full fix of sea air yet, we decided to make the most of the sunny weather and return to the coast.

So, again we drove down to our nearest seaside resort, De Panne, which also happens to be Belgium's most westerly coastal town, just a stone's throw from the border with France.

Walking towards the seafront, we were welcomed by the statue of Leopold I, the first King of the Belgians. Brushing up my knowledge of Belgium's national history, and educating my non Belgian readers in the process, when Belgium became independent in 1830, its constitution declared that we should have a King. After considering several candidates, the honour fell to Leopold von Saksen-Coburg, who was born in German, but who lived in England at the time.

The new King arrived in Calais by boat on July 17, 1831, from where he was taken to De Panne by coach. The statue was erected in the spot where he first put foot on Belgian soil. 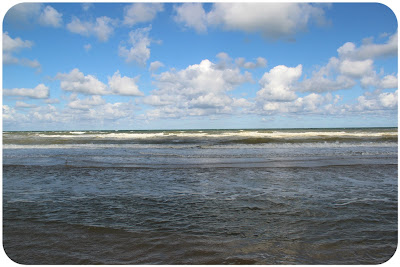 It was quite a blustery day, and as soon as we arrived at the seafront and ventured away from the shelter of the promenade, Jos had to make a run for his hat, which had decided to go its separate way.

Walking along the promenade and then down to the beach, we were leaning into the gale, with the roaring of the waves obliterating every other sound.

Where sky and sea meet, the horizon seemed to be hemmed in a choppy silver line.

No intentional silly pose: I actually had a problem staying upright, and it truly felt as if I was being tossed about by the wind. 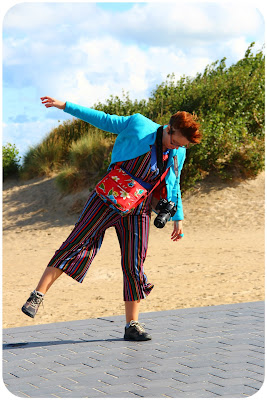 The legs of my jumpsuit were flapping about, the thin fabric no match for the tempestuous wind, and putting on my scarf wasn't an easy task, as it kept trying to escape, following the example of Jos's hat.

Walking on the beach, eagerly breathing in the sea's briny aroma, we were mesmerized by the mermaid's call of the waves, overlapping each other in rapid succession, their tips edged by bubbling white foam. 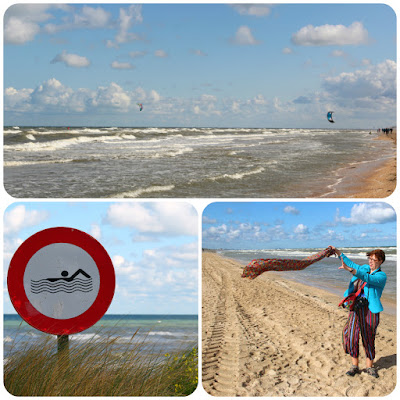 Several years ago, we walked for miles in a nature reserve in the dunes, walking the final stretch along the coastline towards De Panne on the beach.

It had been a glorious Summer's day and we recalled eating our picnic at a viewpoint in the dunes which, in our imagination, wasn't all that far from where we were now.

What if we walked to the viewpoint from here? However, as the tide was high, we had to abandon the beach and walk along the sea wall. 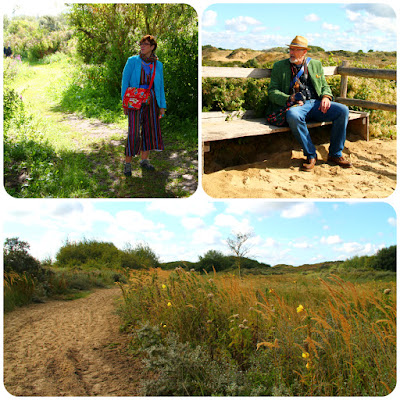 As soon as we'd reached the path leading off the coast, and into shelter of the dunes, the cacophony created by the wind and the waves died away and it was as if we'd entered another world.

Shortly after entering the nature reserve, we started climbing until the aquamarine sea could be glimpsed in the distance. The whitewashed and red-roofed cottages are all that's left of the fisherman's village, where the town's origins lie and where fishing still flourished 100 years ago.

No fisherman could afford to live there now, as the cottages have been turned into exclusive residences. 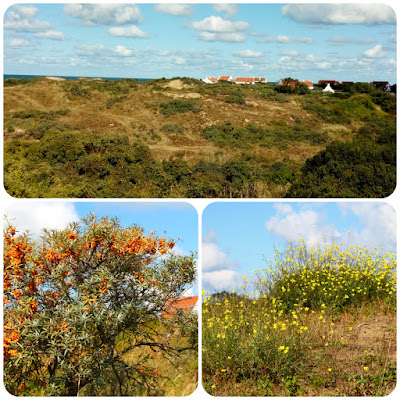 The 340-hectare Westhoek nature reserve is the only dune area on the Flemish coast where nearly all dune vegetation is represented in one unbroken dune landscape. This is due to two artificial breaks in the dunes (called "slufters") where sea water penetrates into the nature reserve at high tide, making the vegetation and wildlife here of particular interest.

This is a region of rolling sand dunes interspersed with dense thickets of thorny shrubs, where it is possible to wander for hours, feeling miles away from the rest of the world. 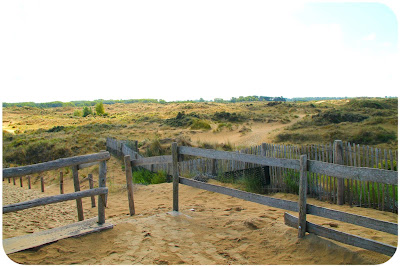 The meandering sandy path took us deeper and deeper into the dunes, but we kept going, expecting the viewpoint to appear around the next bend. 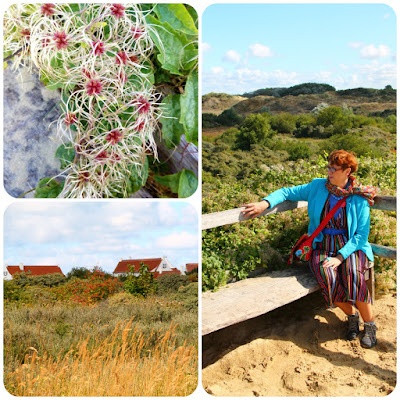 We were just about to give up when suddenly there it was. It was hard slog climbing up to the platform erected on top of a dune through the soft and shifting sand, but the panorama which awaited us was definitely worth the effort. 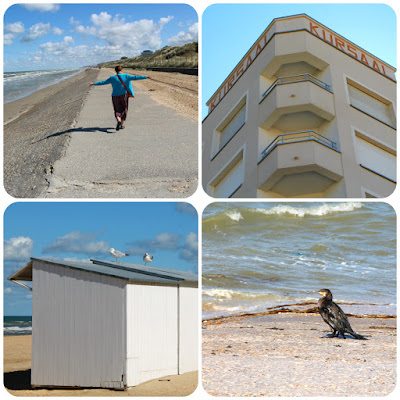 We returned the way we'd come, passing a lonesome and bedraggled cormorant along the way.

It was getting late and back at the promenade the newly renovated Kursaal beckoned us for lunch. 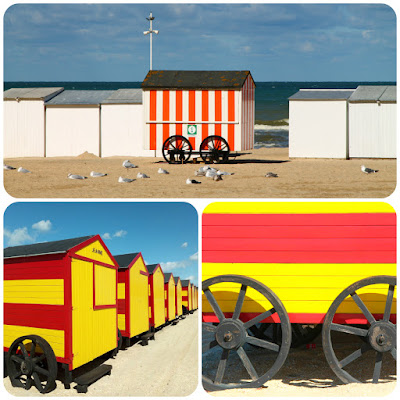 Sufficiently restored, we explored De Panne's one kilometre-wide sandy beach, which is the widest on the Belgian coastline.

There's a huge variety of boldly coloured and striped old-fashioned beach huts, which are quite irresistible and a magnet for my camera lens. 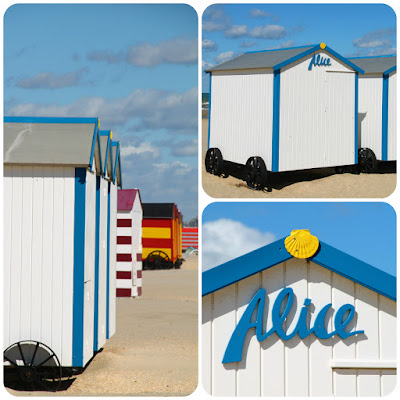 Many of these have wheels, looking as if they have just arrived by time machine from a bygone age, when bathing machines, which allowed people to change into swimwear at the water's edge before wading into the sea, were an essential part of sea-side etiquette. 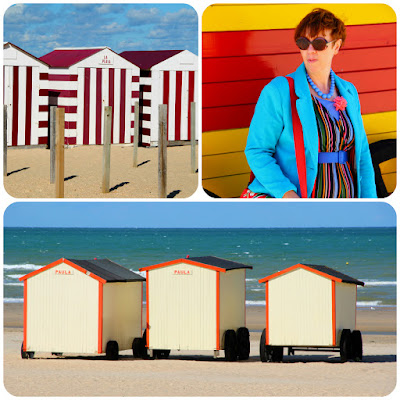 They huddle together in clusters, their colours and names identifying the different rental agencies.

Apart from the quintessential striped ones, I especially loved the blue and white huts named Alice (my late Mum's name), which were decorated with a yellow scallop shell. 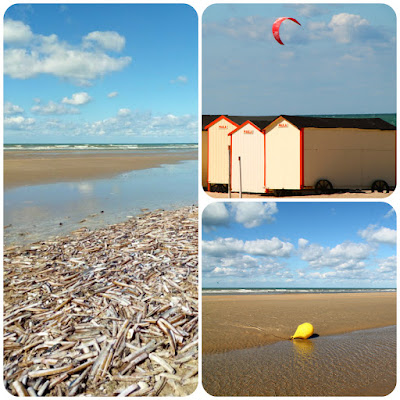 We walked all the way along the beach, past a graveyard of empty razor shells and a lonely yellow buoy left landlocked in the rippled sand, to neighbouring resort St. Idesbald.

The wind had lost some of its enthusiasm by then, so that the going was somewhat easier.

We almost had the beach to ourselves. On this wind-blown day, it was almost devoid of holidaymakers and day-trippers, with only a handful of people like ourselves blowing the cobwebs away. 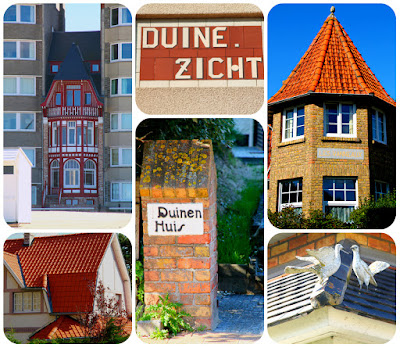 Our feet tired after all this walking, we took a breather and then returned to De Panne by tram.

Just one more day, and our holiday would be over ...