On Monday last week, we set out on our yearly sojourn to the Westhoek, the most westerly part of Belgium.

For seven years now, we have spent the first week of September in this area, which is sandwiched between the North Sea coast and the French borders.

This is the landscape where the battles of the Great War were once fought, its panoramic views and its gently rolling hills, silent witnesses. 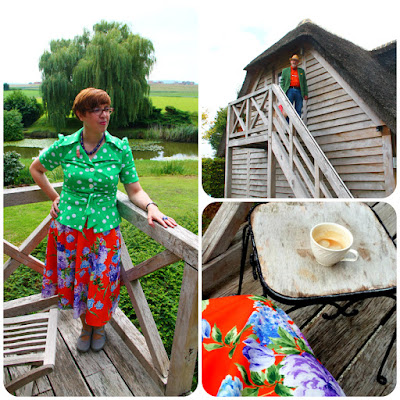 Our journey coincided with the first day of school, so we set out after rush hour but, as it is only a two-hour drive, we still managed to arrive at our destination shortly after midday. 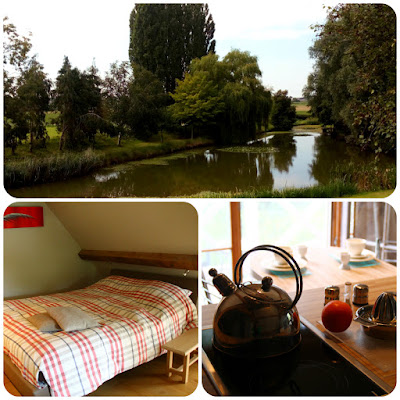 Our cottage, a studio apartment in a thatched wooden building, was as delightful as ever, and so was the unprecedented view from its little balcony. Still, all was not as it as it should have been.

When we waved goodbye to owner Johanna last year, little did we know that it would be for the last time. When we tried to contact her back in May to make arrangements, we were saddened to learn from her daughter that Johanna had passed away. She was only in her early 50s. 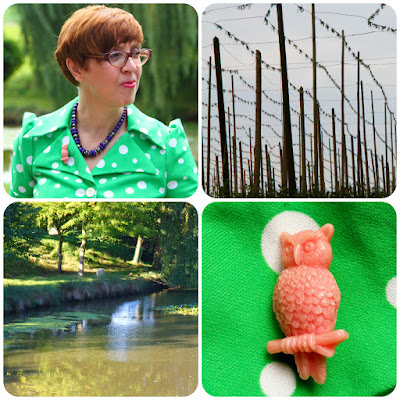 Even if we didn't know her all that well, as we only saw each other once a year, there was a certain connection: we kept in touch by email, and I know she sometimes read my blog.

The news had somewhat knocked us for six and, although we'd gotten used to the idea by now, her absence still cast a bit of a shadow on our holiday, especially when we were in the cottage and contemplating the landscape around it, where Johanna's presence seemed to be poignantly tangible.

The empty poles in the hop fields opposite the cottage were a case in point, as they managed to look even more barren than usual. 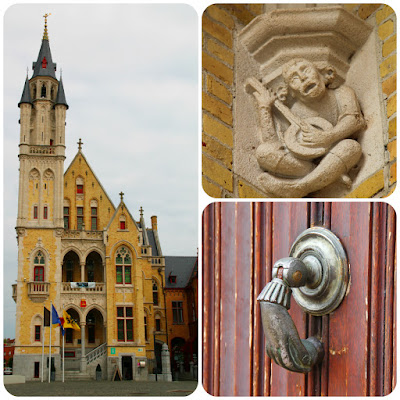 There were reminders even in the streets of nearby Poperinge, where a strange heaviness seemed to be lingering.

For once, the square in front of the yellow bricked town hall was empty, and one of the gargoyles hiding in a corner of the stonework seemed to be playing a sad song for further emphasis. 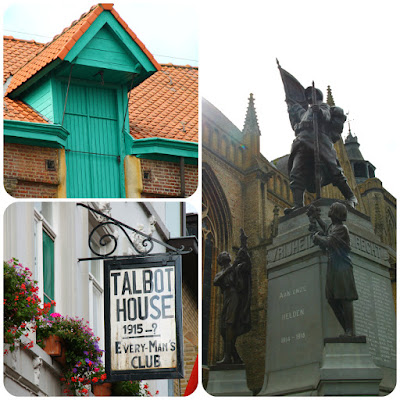 We always gravitate towards Poperinge on our first day, sampling the atmosphere of this deceptively quiet little town, and taking in the familiar sights like the Hop Museum (top left) and Talbot House (bottom left), which we visited back in 2016 and 2017.

Our visits usually end with a walk in Poperinge's enchanting Burggraaf Frimoutpark.

The park, covering 3 hectares, is the town's green lung, affording views of its skyline. Unfortunately, this view has been marred by one or two cranes for the past couple of years. Thankfully these can be photographically erased with some careful framing. 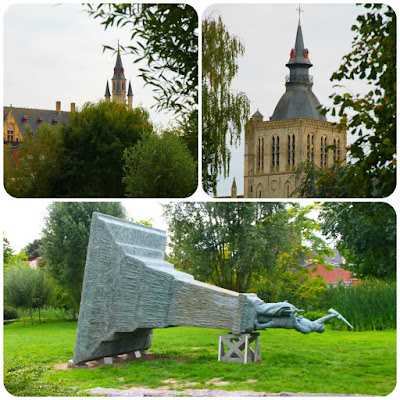 A new artwork has popped up, and no, it hasn't toppled over, this is the way it is meant to be.

The hollow, bronze sculpture, which is six metres long, is called "Shot at Dawn" and its creator, Anno Dijkstra, who was inspired by Poperinge's War Memorial in the Market Square, is issuing an invitation for reflection.

In his words: In my imagination I carefully tilt the monument. It is now lying on its back. The bottom of the pedestal has become a gigantic black hole. I can just about see the starting point of the soldier, the soles of his shoes, his legs. And then it gets really dark. Do I see his chest, his neck? Can I look inside his head? The darkness is impenetrable. The pedestal lying down looks like a funnel. Through the funnel the present slinks in: it brings some clarity to that darkness. Or is the funnel a horn through which the past tries to shout out something at us? An oracle? Do we hear the enthusiasm of the first weeks of the war, the homesickness, the pride, the doubt, the blood lust, the rattle of death, the cries of victory? Or do we mainly hear a rustle? The rustle of our own blood? 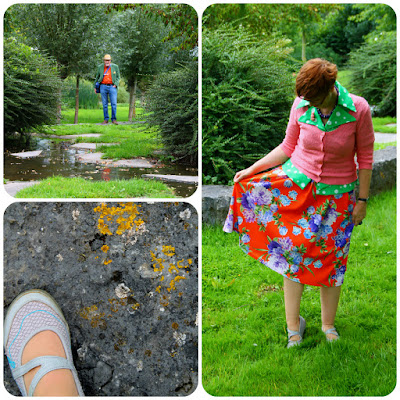 The park is named after Dirk Frimout who was born in Poperinge and who, in 1992, was the first Belgian in space. He is now an honorary citizen. 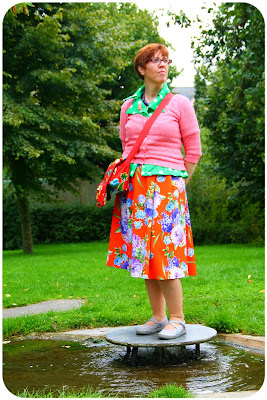 We walked the length of the park, with its many water features. This one is looking a bit like a miniature flying saucer, which has just landed in one of the ponds. 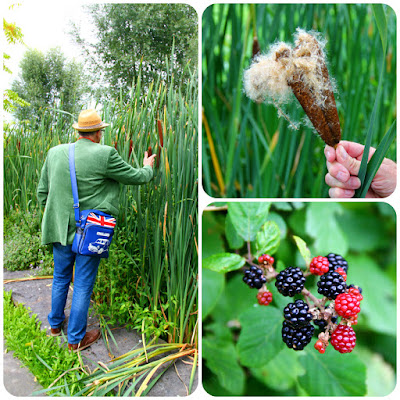 We are on the cusp of Autumn, a delightful juxtaposition of seasons. The beginning of the end of a never-ending process. A reminder, both of nature's fragility and strength, and the passing of time. 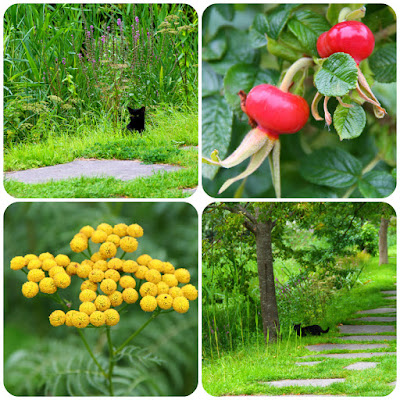 A black cat was about to cross our path. At first all we could see was its two pointy ears. Its interest piqued, it emerged from the grassy verge. But, keeping in mind that curiosity killed the cat and all that, it then  seemed to think it was better to be safe than to be sorry, with one backward glance slinking off the way it had come. 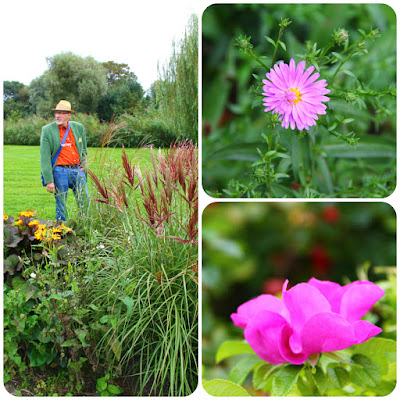 While admiring the imaginative planting near the main pond, we were accosted by a gaggle of ducks.

Jos magicked some biscuits from his inside pocket, which he proceeded to distribute among the gang, making him look like a kind of pied piper. Aren't they the most funny creatures? At one point, the most forward of the white ones were trying to eat Jos's shoe-laces. My favourite was the one with the punky hairdo on the bottom right. 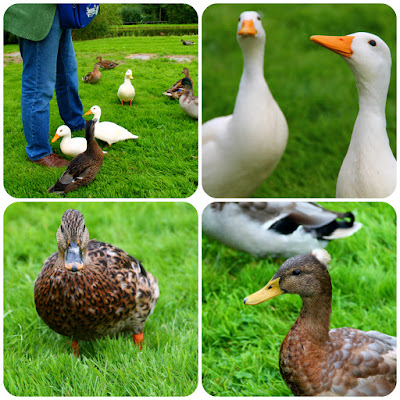 We returned along a boardwalk leading us over the ponds and through a marshy area. 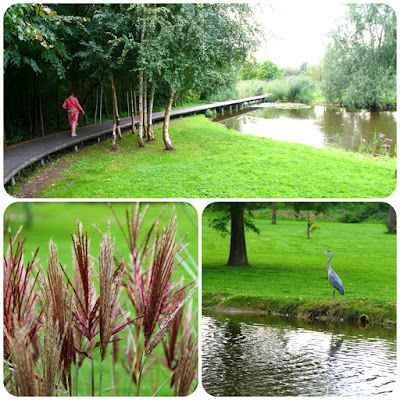 The statuesque figure of a blue heron was patiently waiting for its evening meal at the other side of the pond. 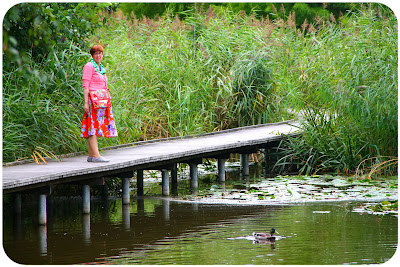 Here I am posing for one more photograph before returning to the town in search of our own evening meal. 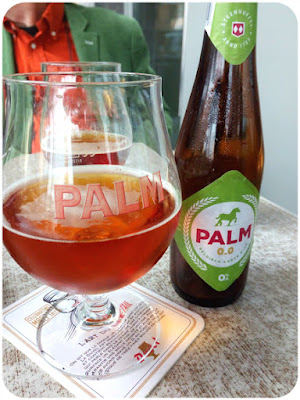 We sat down outside on the terrace of Hotel de la Paix in the Market Square, sampling glasses of Palm Green, a deliciously punchy non-alcoholic beer, while waiting for our meal to arrive. 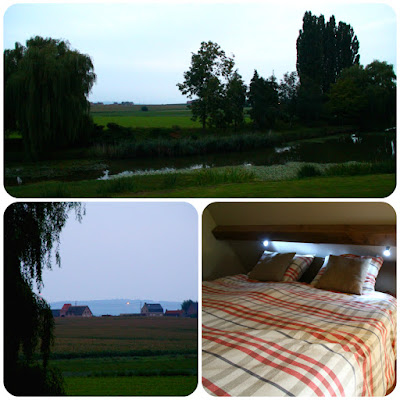 Then it was back to our cottage, where we watched the sun go down from our little balcony and retired to our comfortable bed for a good night's sleep.

Watch out for the continuation of my travelogue in my next post!

Meanwhile, I'm taking my travel outfit, including flying saucer, to Patti's Visible Monday at Not Dead Yet Style!