As time goes by

Can you believe it's September already? Well, neither can I!

I wonder if time is playing tricks with my mind, as it seems as if only yesterday we were welcoming Summer, and then, after a blink or two of the eye, the season's time is slowly but surely running out.

So, where did the time go? Did I let it slip through my fingers, allowing it to vanish into thin air?

Typically, though, the past week time seemed to go just that little bit slower, as if it was taunting me, and keeping the weekend, and my subsequent holiday, tantalizingly out of reach. 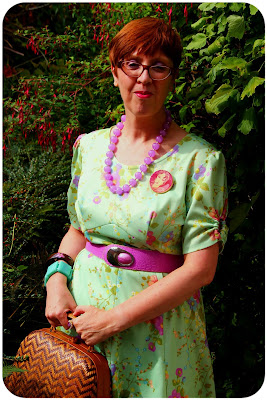 But we've finally made it to the weekend and we're all set to go away for a week tomorrow. We'll be storing a whole new set of memories to get us through Winter, and gathering stories to tell.

Before I leave, however, there are some things left to share with you, starting with the promised charity shop finds.

True vintage finds are a rare commodity at the charity shops these days. Nevertheless, I was able to pluck this amazing mint green floral frock from the rails. 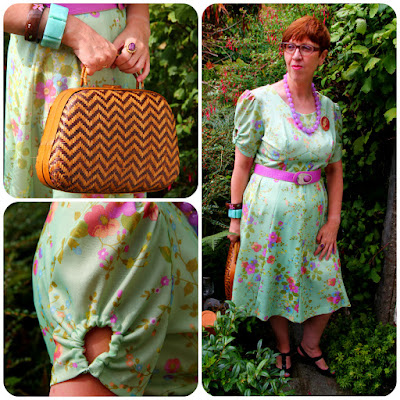 It was only in the fitting room that I noticed that one of the ribbons gathering the sleeves was missing.  The one that was still in place was tied with a bow, which wasn't much to my liking so, when I got home I untied the bow, removed the ribbon and cut it in half. I then re-threaded and gathered each sleeve until it was a perfect fit, then sewed the ribbons in place and snipped off the excess. Et voilà! I keep surprising myself with my sewing skills! 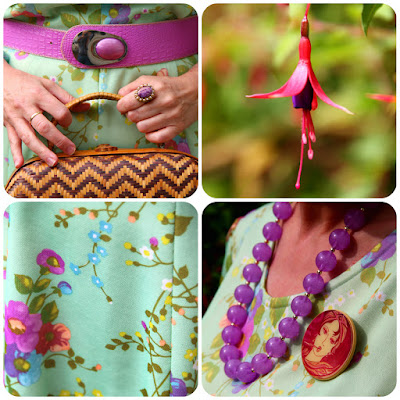 The floral print offers a range of colour to choose from, but I took my lead from the one shining the brightest, adding accessories in shades of magenta to give it more pizzazz.

My bamboo handbag is another one which hardly sees the light of day, as it is rather delicate, but isn't it a beauty? It was a flea market find back in November 2016. 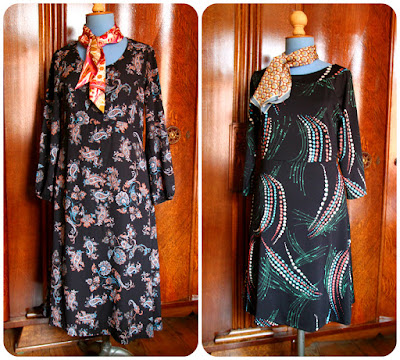 The summer stuff has all but gone from the charity shop rails and the first of the long sleeved dresses, jumpers and heavy wool skirts are making an appearance, with the overall colour palette getting darker.

Now, I don't wear black as often as I used to, preferring bright colours whatever the season, but I'm always prepared to make an exception for a great print.

The ankle-length dress on the left, with its Paisley-esque print, originally came from a high street shop. The fabric is light enough for those late Summer days merging into Autumn, and I can see myself wearing it for a stroll in the park, with a sturdy pair of boots.

The other dress is King Louie, and its original retail price must have been around the € 80 mark. It looks brand new and, although I'm obviously not complaining, it always boggles my mind that someone would pay good money for a dress and then donate it to charity after only a couple of wears. Oh, I know fashion is fickle and all that, but still! 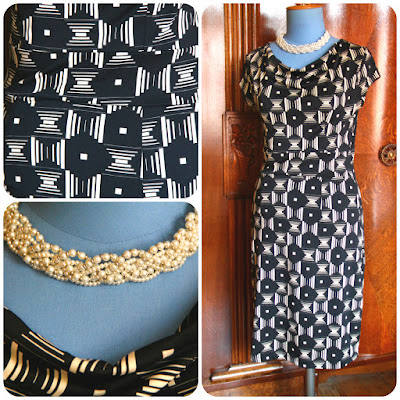 This cap-sleeved cowl neck frock is King Louie as well, again in pristine condition. I succumbed to its funky pop-art print! 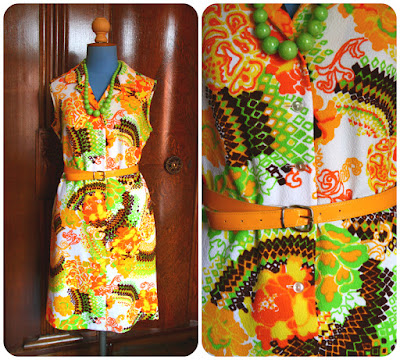 Not a charity shop find, but I've just realized I haven't shown you this citrusy sleeveless Trevira frock yet. It's from Think Twice and the fabric reminds me of terry cloth. No chance of Jos losing me in a crowd when I'm wearing this! 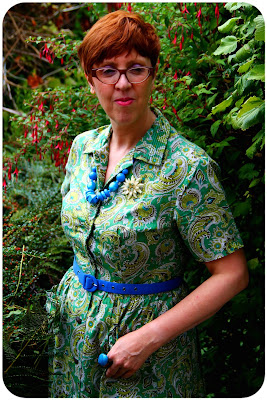 This dress might look familiar as it's the one I bought at Ashmans Antiques and Old Lace in Welshpool on the last day of our holiday. Prompted by the turquoise bits in the print, but not wanting it to be too matchy-matchy, I accessorized it with a bright blue belt, necklace and bracelet. 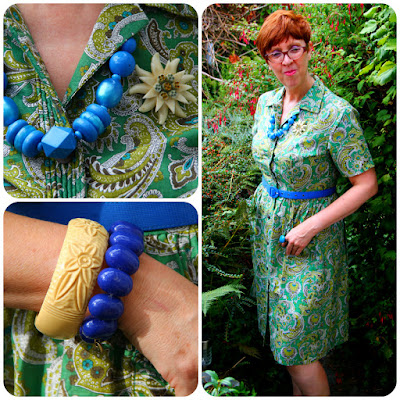 Although you've seen some of my holiday finds in my travelogue, there are still quite a few things which escaped my attention, so now is as good a time as any for a round-up. 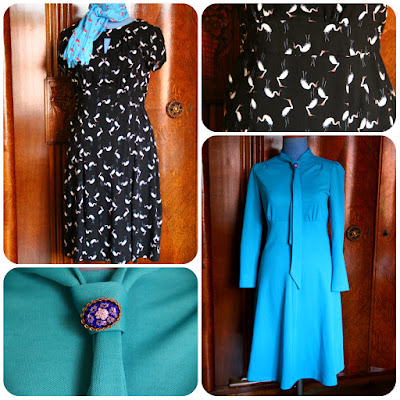 The charity shops in Welshpool came up trumps with a new-to-me frock printed with birds, which I already wore for our return journey, and a vintage long-sleeved crimplene dress in a hard to photograph shade of blue. 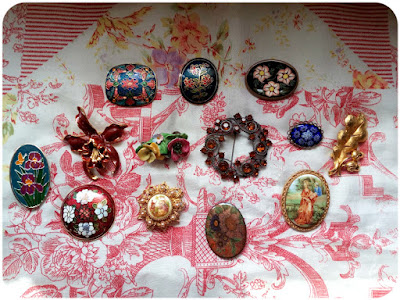 Not as many brooches as last year, but still a good haul. They were picked up from charity shops in various locations, including Welshpool, where I found no less than four of them! 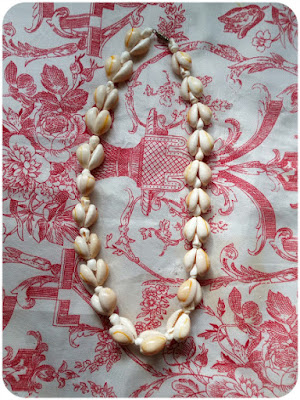 The shell necklace was waiting for me in a charity shop in Ludlow and it proved to be a good year for bangles and bracelets. 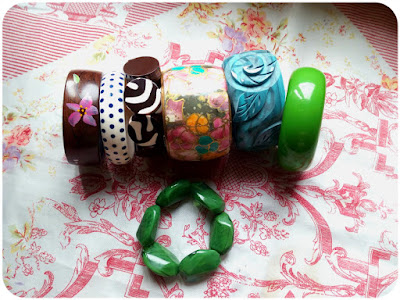 Saturday's weather forecast was pretty dire which, as Jos's eldest daughter and her husband were having a garden party for their 20th wedding anniversary, had me rack my brain on what to wear. 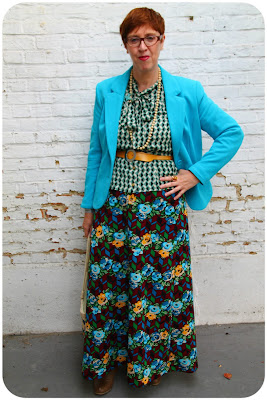 There turned out to be no sign of the forecasted rain, but it was still quite chilly, so I opted for a floral maxi skirt, conveniently hiding the pair of tights I felt the need to wear. I was also wearing booties, although you cannot see much of them either.

My lightweight, long-sleeved blouse was layered over a short-sleeved tee, which was cozy enough with my turquoise lined jacket on top. 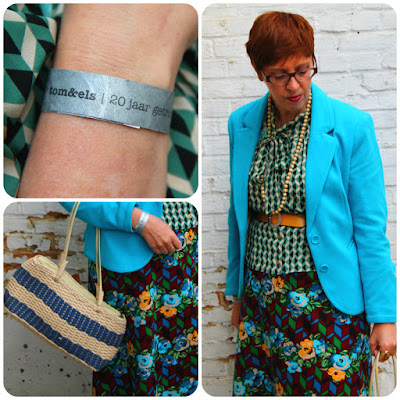 The fact that I wasn't wearing any bracelets or bangles (forgot!) was soon remedied when upon arrival at the party we were supplied with a festival-worthy wrist tag mentioning the happy couple's names and the occasion. 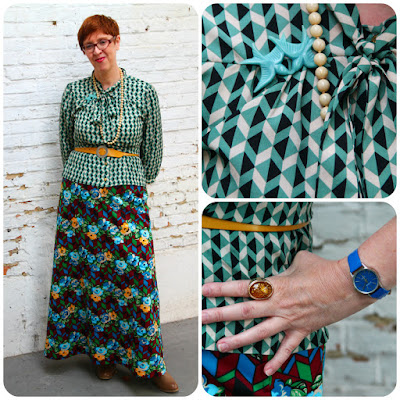 The blouse actually started life as a mini dress, which I used to wear over leggings many years ago. Although it hadn't been worn in ages, I was reluctant to let it go as I loved the print, so I shortened it into a blouse. Yes, you have read that right: no-sewing-skills-whatsoever-Ann actually did this herself! Maybe I did inherit some of my great-grandmother Angelica's seamstress genes after all ... 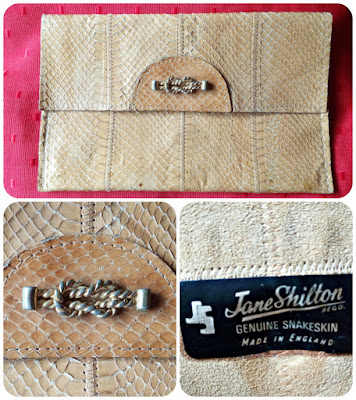 I'm ending this post with Sunday's flea market finds. We only found out at a very late hour that there was a flea market in our village, but obviously we couldn't let it pass without having a look.

My first find was a snakeskin Jane Shilton clutch, which was hiding under a pile of gloves. 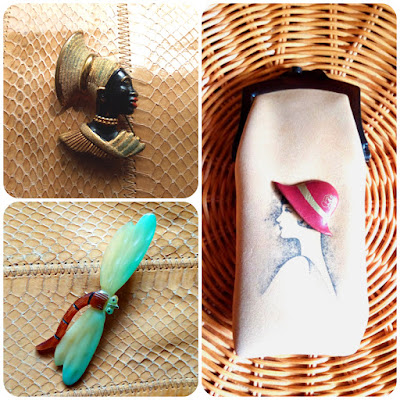 I am not sure how politically correct the brooch on the top left is, but isn't she gorgeous? She is 1950s, and both she and the marvellous celluloid dragonfly brooch were only € 2 each.

Finally, I was in need of a new case for my reading glasses and thought this one with its be-hatted lady and tortoiseshell clasp fit the bill nicely.

That's it, our bags our packed for tomorrow. No stress, as it's only a two hour drive to our destination. Here's to hoping the weather gods are with us again.

See you next week!

Linking to Patti's Visible Monday at Not Dead Yet Style before I go!