The sky, while still quite overcast, was looking just a tiny bit brighter on Wednesday morning. No longer trusting the weathermen, who seemed to be constantly contradicting each other, and with the weather app on Jos's phone claiming there would be an 50% chance of rain, I decided to wear one of the two pairs of trousers I'd packed.

This navy pair was bought in the H&M sales and their subtle, almost tone-on-tone print, makes them practically a neutral, so that choosing a top was easy.

The tropical print short-sleeved jumper was another new-to-me King Louie find and, bought at a time when it was still much too hot for a jumper, even a lightweight short-sleeved one, this was its very first wear. I added a slightly longer string of pale blue plastic beads.

Before we left I swapped the orange ballerinas for a sturdy pair of walking shoes and took both a cardigan and a raincoat with me. I'm happy to divulge that I wouldn't need the raincoat! 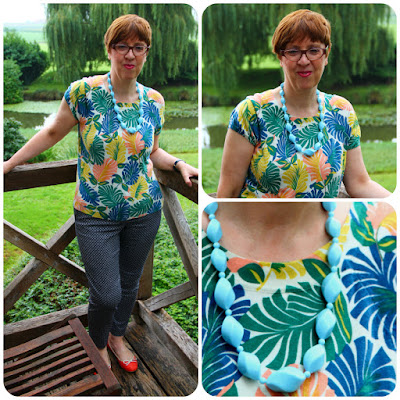 But first, we made time for a leisurely breakfast, which is something we treasure as we're usually unable to do this on a weekday morning.

Soft boiled eggs with soldiers and cups of strong coffee were on the menu! 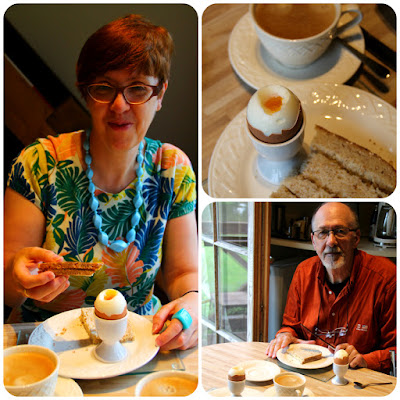 The less than perfect weather also determined our plans for the day, deciding against a ramble in the hilly countryside south of Poperinge.

Instead, we found ourselves driving down to the quiet little town of Diksmuide, less than half an hour away in north-easterly direction.

Last time we were here, there was free and unlimited parking near the station but, although parking was still free, there was a time limit of two hours. While making inquiries, Jos bumped into a very nice chap, who escorted us to a free car park at the other end of town, where we grabbed the last parking spot. 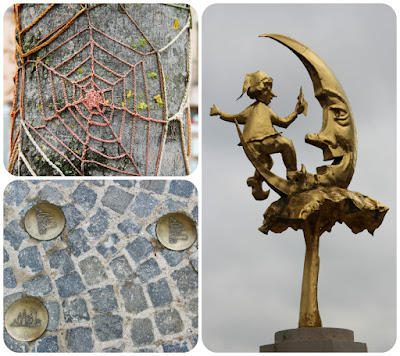 From there, it was only a short walk to the town's main square, the Grote Markt.

What a peculiar place, we mused, as we passed some trees, their trunks decorated with macrame spiderwebs. At our feet, we noticed some strange copper studs in the pavements. And that was before we came across the man in the moon!

Diksmuide is another market town which was reduced to rubble during the First World War and painstakingly restored.

The resurrected Grote Markt has an array of attractive buildings and it's hard to fathom that almost everything in sight was rebuilt in the 20th century. 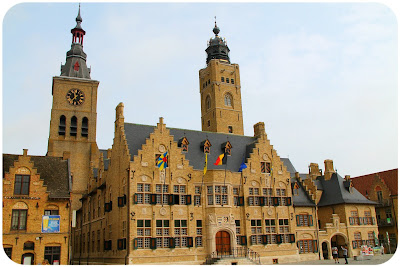 In a prominent position is the recently renovated town hall. The original hall was built in 1428 but after its destruction it was rebuilt in 1923 in Flemish Renaissance style with the addition of a belfry tower. 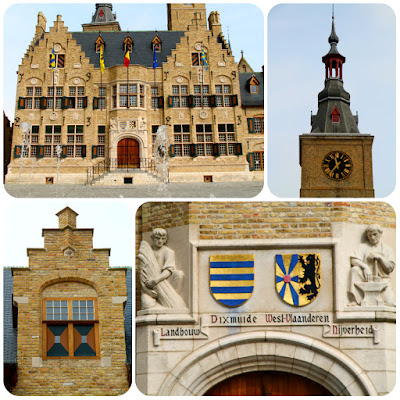 Typically, there was no sign of the forecasted rain. Better still, while we were exploring the buildings surrounding the Grote Markt, the grey clouds made way for a timid blue sky and a hesitant sun was bathing the buttery brick façades in a golden glow.

Behind the town hall lies the Sint-Niklaaskerk (St. Nicholas Church). This too was completely reduced to rubble in the war and what you see is a reconstruction of the Gothic building with an elegant 18th Century spire. If you look at the black and white photograph taken in 1918, I'm sure you agree this was quite a feat! 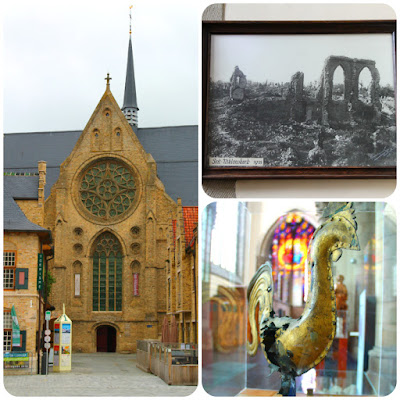 Inside the church some fragments of the original building can be found, including a glass case containing a battered weather vane.

The oak churchwardens' bench on the top left is a replica of the original from 1542. 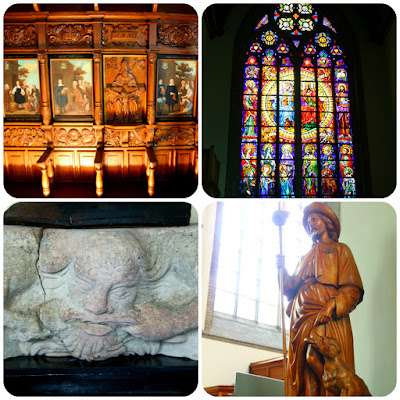 Back in the square, we admired the statue of General Baron Jacques de Dixmude, which has been guarding the town since 1930.

In 1914, he was commander of the Belgian troops in Diksmuide, and he is considered a military hero of the First World War. 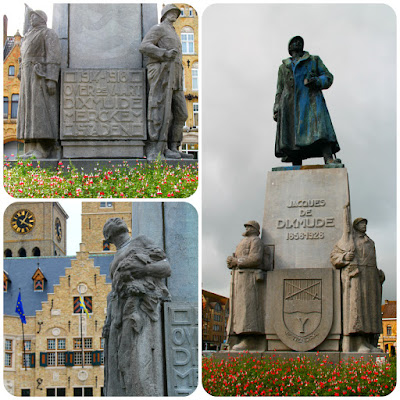 After lunch in one of the restaurants lining the square - a mediocre affair - we explored the rest of the town by walking the 3.2 km-long town trail, indicated by the copper pavement studs I mentioned before, with information panels at various locations.

In addition to this, we also had a leaflet outlining the walk, but unfortunately this often contradicted the pavement studs, which wasn't very helpful for people who are notorious at getting lost! 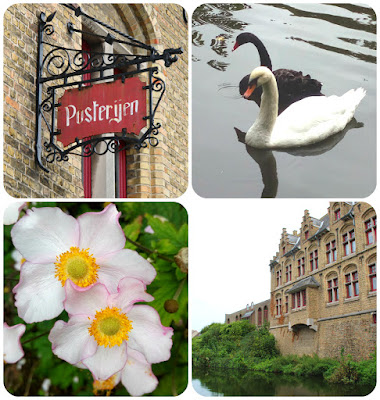 Our walk passed through the town park, which is laid out on the old ramparts, where a mixed couple of swans was reigning the roost on the moat.

Soon after emerging from the park we came across the Post Office. This was the residence of the Spanish governor during the Eighty Years' War (1568-1648). After 1918, it was rebuilt in line with the original, with the addition of stepped gables and tabernacle windows.

Here, we had to descend a flight of steps leading down to the town canal towpath. 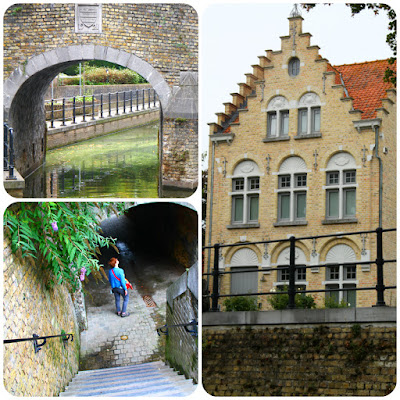 It would have been tempting to keep following the canal, but then we would have missed two highlights, the first being the Fish Market, where fisherman’s wife Jette is a bronze reminder of the town's former fish trade. 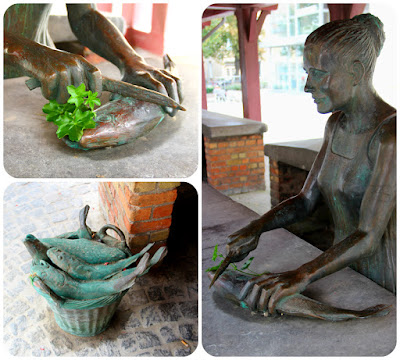 Crossing the bridge over the canal, the copper studs pointed us into the direction of a narrow street opposite the fish market, which led to the town's small beguinage. 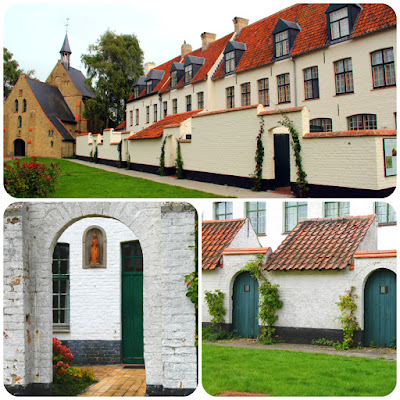 From the 13th Century onwards, the resident beguines made a living washing, bleaching and processing wool, cloth and linen, breeding animals and even brewing beer. After the First World War, the beguinage was rebuilt. However, the beguines did not return and the beguinage was given a social function.

We retraced our steps to the waterside, leaving the town behind, and venturing into open countryside. With fields offering a view to Diksmuide on our right, we walked alongside a small stream which shortly joined the town's main river, the IJzer (or Yser). This is the famous river which played such a crucial part in the course of the First World War. 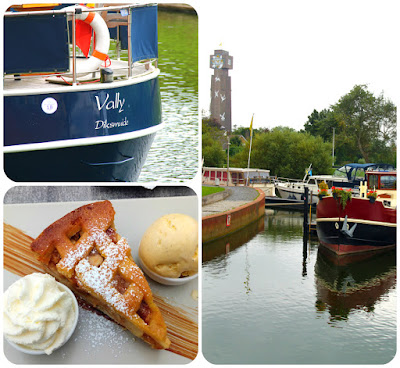 Beyond the compact marina, we could see the striking IJzertoren (Yser Tower) which is the town's main attraction. As well as a monument to peace, it is a 22 story war museum, which we have yet to visit.

Instead, we opted for indulgence in the form of warm apple pie with ice-cream and whipped cream, which we ordered on the terrace of a tearoom facing the tower.

Unfortunately, a whole army of pesky wasps made a beeline (I guess wasp-line would be more appropriate here) to our table, intent on gorging on our sugary offerings and spoiling our appetites.

Then, after a quick visit to one of the most depressing charity shops ever, it was time for our last port of call for the day. 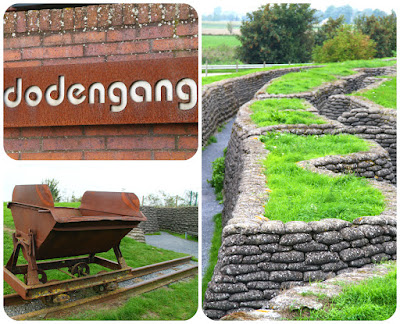 The Dodengang (or Trench of Death),  just 1,5 kilometers along the river from Diksmuide, is the last remnant of the Belgian First World War trench system.

There is an visitor centre outlining the history of the infamous trench through interactive applications, pictures, film footage and over one hundred original objects.

But it's the network of trenches itself that really gets under one’s skin. Now the place is clean, orderly, and reinforced with concrete, making it almost impossible to imagine the unbearably harsh conditions soldiers fought and lived under in this godforsaken hellhole. 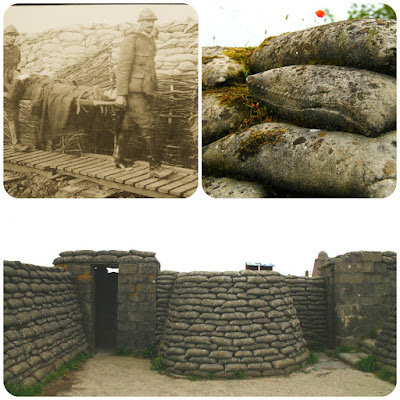 This one kilometre long network of revetments, saps (the extension of a trench to a point below the enemy fortifications) and dug-outs was one of the most dangerous Belgian positions on the Western Front, situated just 50 metres from a German bunker. As a result, the trench was subjected to almost constant fire from the Germans.

Finally, in 1917, a big concrete shelter with lookout holes called the "Mouse Trap" (bottom photo in the above collage) was built to stop the Germans from infiltrating the Belgian trenches at the ends of the saps. 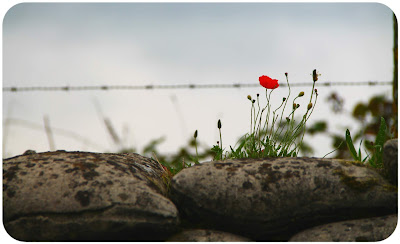 As if on cue, the sun had disappeared, leaving a moody sky, its slate grey matching the somberness of a war scarred landscape, the only colour provided by a single red poppy raising its head.

* Post title taken from In Flanders Fields by John McCrae

On a lighter note, I am linking my outfit to Nancy's Fancy Friday this week. Do go and have a look at the other entries!