Let there be light ... and chocolate!

On Monday, the last full day of our extended weekend break in Bruges, we lingered over breakfast, loading up our plates with different kinds of bread and other delicacies, while enjoying glasses of home made apple juice and strong cups of coffee.

Rain kept plinking into the puddles which had formed overnight, drenching what we could see of the garden through the rivulets of raindrops which had gathered on the breakfast room's windows. 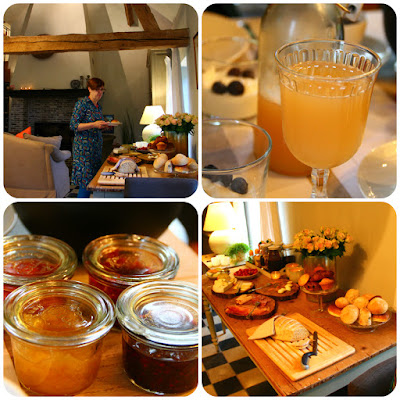 When the rain finally eased off, we made a beeline to our car and drove down to Bruges, where we once again left our car at the station car park and made use of public transport to reach the city centre.

The rain might have stopped but it was still gloomy, with nasty clouds promising more rain overhead. This, however, did not deter our fellow tourists, who had once again gathered in their masses, intent on taking over every square centimeter of the city's cobbled streets. 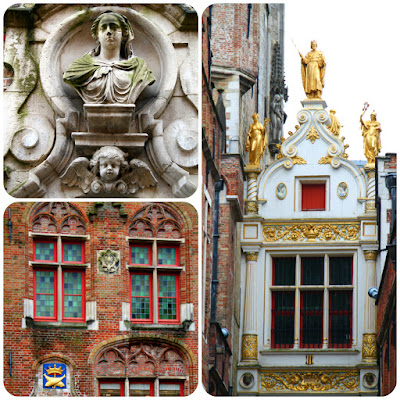 From the bus stop, we meandered in the opposite direction of the day before, making our way via the Vismarkt (Fish Market) and a narrow passageway going under the quirky name of Blinde Ezelstraat (Blind Donkey Street) to the Burg, which might very well be Bruges' most architecturally interesting square.

At the end of the alley, a gateway passes under a building which seems to come straight out of a fairy tale. This is the Civiele Griffie (Old Civil Registry), which was built in the Renaissance style in 1537.

Before walking underneath the archway, we looked up to see Solomon standing tall with Prosperity to the left and Peace to the right. On the Burg itself, the full splendour of the building is revealed, its recently restored facade opulently decorated with columns and gilded friezes and statues, with Lady Justice balancing the scales in a prominent position on top. 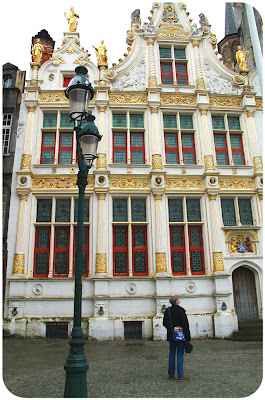 And look, only one tourist in front of the building. Quick, let's grab this unique photo opportunity! 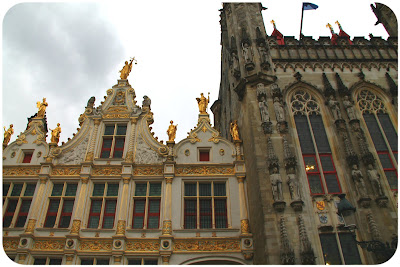 Next door is arguably the most impressive building on the Burg, the Town Hall. This magnificent  Gothic building dates from 1376, making it one of the oldest in the Low Countries. Its facade is richly decorated with gothic windows, turrets, statues of the Counts of Flanders and biblical figures and the coats of arms of subordinate towns. 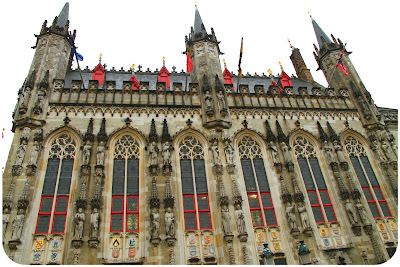 In a corner of the square is one its smallest buildings, the Basilica of the Holy Blood. The flamboyant facade, with its gilded statues and medallions representing the Counts of Flanders and their partners, is actually a 16th century staircase that connects two chapels: the lower Romanesque Saint-Basilius-chapel and the upper neo-gothic Holy Blood-chapel. 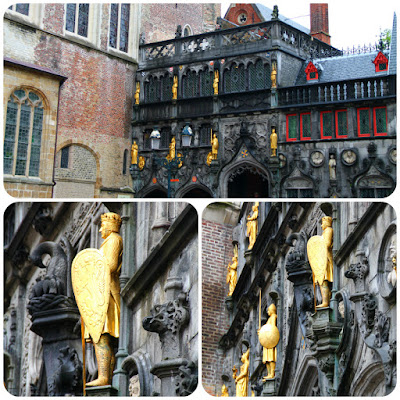 The church houses a relic of the Holy Blood allegedly collected by Joseph of Arimathea and brought from the Holy Land by Thierry of Alsace, Count of Flanders. Originally built between 1134 and 1157, the church was promoted to minor basilica in 1923. 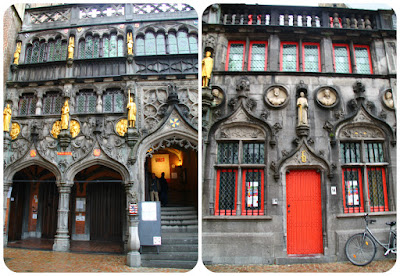 After admiring the square's lavish architecture, we were getting hungry, so we made our way to the nearby Markt, where we had a meal on the terrace of the same restaurant we went to on our first day.

It was cold and the first drops of rain were starting to fall, so we were glad the terrace was covered and that we were sitting quite close to a heater.

We both had a craving for witloof in de oven, a classic of Belgian cuisine, which we'd seen on the menu. The dish consists of endives (or chicory) heads, which are rolled in ham, covered in a cheesy bechamel sauce and cooked in the oven, usually served with mashed potato. Yummy! 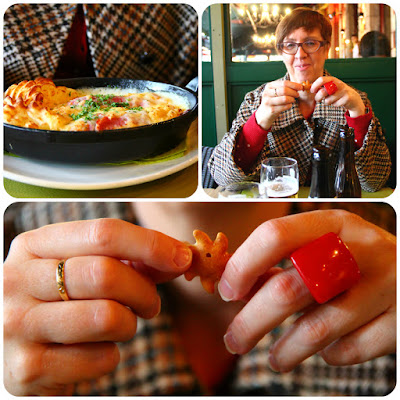 It was clear by now that we weren't going to see the sun again that day, so we had to make do with this sun-shaped cracker which came with our drinks!

We'd planned to walk to the Hansa Quarter after lunch, which we did, but the weather gods were well and truly against us, as it had started raining heavily.

There was nothing for it but to bring out the unwieldy umbrellas, which made taking photographs quite an ordeal. Along the way, we'd bought some cheap see-through plastic rain ponchos, looking a bit like oversized rain bonnets. At one point Mr. S. decided to wear his, which ended in fits of laughter. No way was I going to wear this! 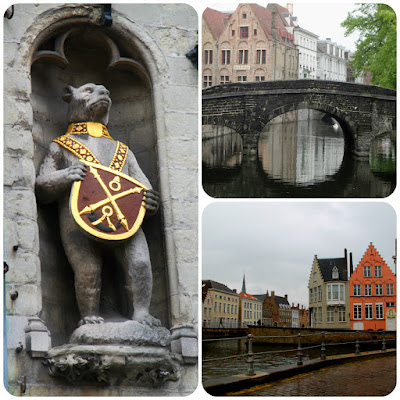 From the 13th to the 15th century, Bruges was the most important trading centre in North-West Europe. In the old Hansa Quarter you can admire the mansions of the wealthy merchants of the era, and the whole quarter is drenched in a timeless atmosphere which is particularly charming, even on a rain drenched day!

And look, there's that bear again! This one is taking pride of place in a niche of the Poortersloge (Burgher's Lodge), which was built towards the end of the 14th century, and which was the place where wealthy citizens and foreign merchants met socially.

There's a legend attached to the bear, of course, involving a knight in shining armour called Baldwin Iron Arm, who heroically freed the city from a particularly aggressive bear. You can read the full story here. 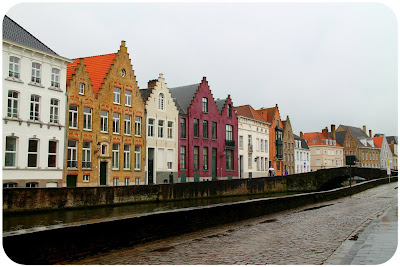 Pelting down ever more more relentlessly, the rain drove us to a nearby museum. Or rather: two museums housed in one building, for which we bought a combined ticket.

The most popular one, Choco Story, tells the history of cocoa and chocolate, from its Mayan and Aztec origins to chocolate as we know it today.

Our ticket came with a free bar of chocolate (displayed on the museum guide on the top left) and it all started very promisingly with a huge chocolate egg, marking the museum's opening in 2004. 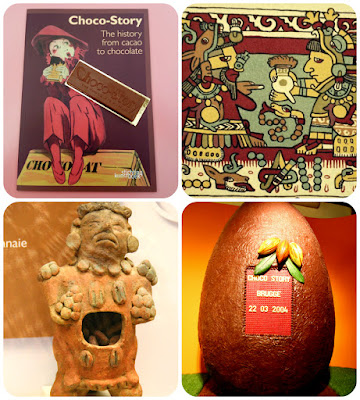 The museum is laid out over three floors and the average visit is supposed to take about one hour.

First we were taken through the customs, beliefs and everyday lives of the Mayas and the Aztecs, how they used cocoa as an offering to the gods, later using cocoa as a drink (equivalent to today's champagne - top right) and as a currency. On the bottom left is a piggy bank containing cocoa beans.

Later, the Spaniards adopted the drink, but added sugar to it, after which the sweet drink became the favourite beverage at Europe's royal courts.

All very interesting, if the crowds of tourists hadn't all decided to come as well, blocking the displays and making the going quite tough. As if this wasn't bad enough, there were bottlenecks at the three spots which had chocolate dispensers and where you could eat as much chocolate as you want. Needless to say, these were very popular! 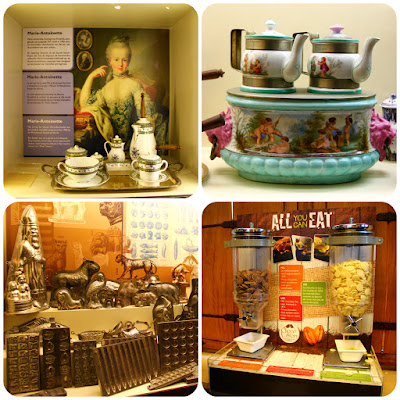 Anyway, let's proceed with the history of the chocolate bar, which started much later that that of the drink. I was surprised to find out that in 1847 the first tablet of chocolate was moulded in England!

Initially, chocolate was made by craftsmen only, but then industrialization gradually took over chocolate production and the rest, as they say, is history!

In the last part of the exhibition, we admired the many chocolate moulds, and learned about the history of Belgian producers, like Côte d'Or and Jacques (below). In these displays we recognized some things from our own little museum at Dove Cottage! 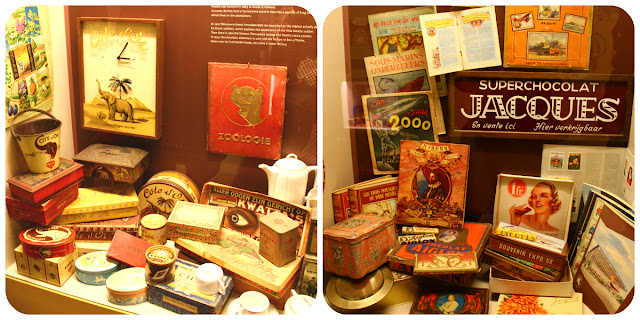 By then, we'd had quite enough of chocolate, not to mention the crowds, so we made our way to the turnstile entrance of the second museum, Lumina Domestica.

The museum contains the world’s largest collection of lamps and lights. More than six thousand objects tell the story of interior lighting, from the earliest prehistoric clay lamps and oil lamps that look like they’re holding a genie, to the light bulb and even LED. 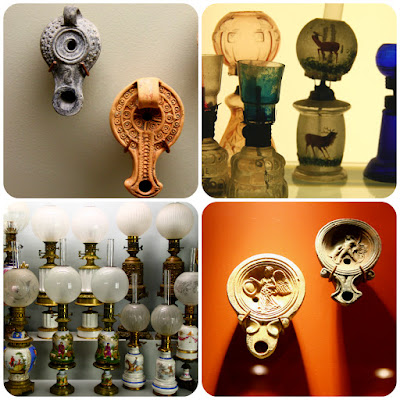 We'd left the crowds behind stuffing their faces with free chocolate as, apart from one other couple, we were all alone, so that we could admire this amazing collection in peace! We were quite dazzled by the time we left the building, finding that mercifully, if only temporarily, it had stopped raining. 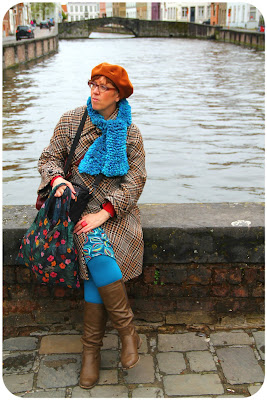 Before heading back to our B&B, there was time for one more photo of me posing on one of the bridges crossing the Spiegelrei, a particularly picturesque corner of Bruges.