All around my hat

With still one day of our weekend in Bruges to go, I wanted to give you a break by reporting you about last Saturday's flea market.

The rain clouds which had dominated our little sojourn had evaporated by the time I had to go back to work on Wednesday. Typical, isn't it? But we were in luck as when the weekend rolled along we were back to Summer weather and it was as if nothing had happened.

Saturday was a glorious day and perfect for our first outdoor flea market of the year. 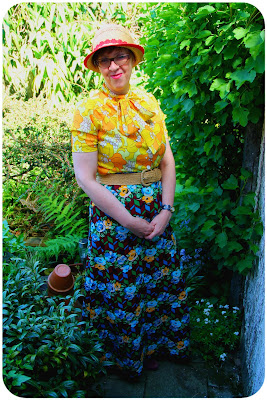 In our haste to get going, we forgot all about outfit photos, and I had to recreate Saturday's outfit on Sunday, with photos taken in our garden. Yes, that's the assault of greenery you can see behind me! 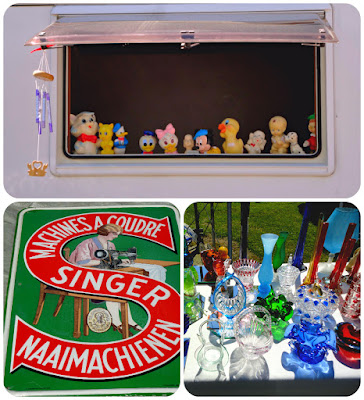 But let's get back to the flea market first. I'd taken my compact camera with me but even if it was dangling from my wrist for most of the time, hardly any photos were taken, as I was far too busy browsing. 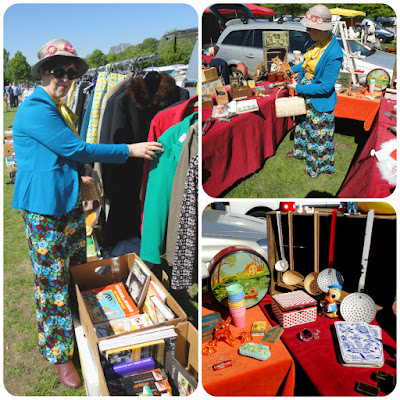 I started out wearing a lightweight turquoise jacket but after lunch (I'm sure you won't be surprised if I tell you we'd brought a picnic) it was stashed away as it was getting quite warm, but with a welcome breeze preventing it from becoming too hot!

My white wicker handbag was charity shopped for next to nothing, and it was with some glee that during one of my lunch breaks this week I happened to see a similar one in Mango retailing for just under € 50.

If you look carefully, you might notice the change of hats! Initially I grabbed the hat I wore all through last Summer, a plain one which I'd customized by adding a hair band. You can see a close-up of it here. 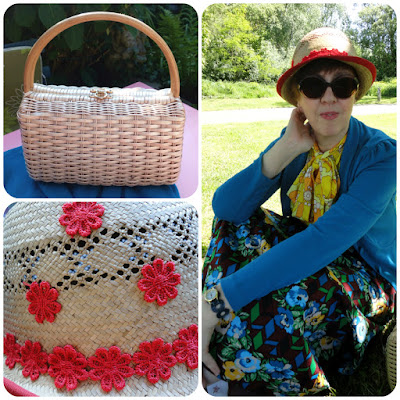 But then I fell in love with this little hat which was on display behind one of the market's stalls. As luck would have it, it was my size, so not only did I buy it, I spent the rest of the day wearing it too! 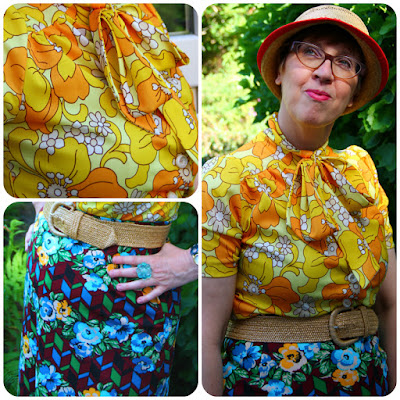 I was wearing a maxi skirt with blue and yellow flowers interspersed with blue, green and black diamonds and stripes on a burgundy background. I bought it back in Autumn and this was actually its first wear. The blouse with its floppy pussy bow and psychedelic floral print in yellow, orange and white, has been in my wardrobe for at least two Summers. Both came from Think Twice.

The straw belt was a high street find and very comfortable to wear as it's got some stretch in it. 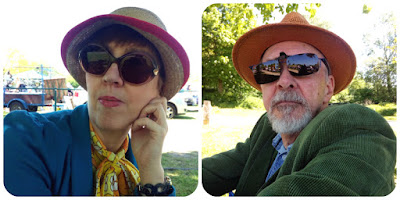 I was complimented quite a few times on my outfit and at one point I overheard one of the stall holders, who must have been English, exclaiming to his neighbour: look at how well turned out she is - and her husband's the same! I liked that last part the best, and obviously Jos was very chuffed when I told him. 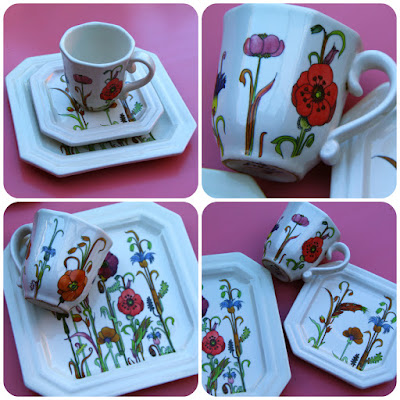 Only minutes into the flea market my eye was caught by a cup painted with the most exquisite flowers on an otherwise quite uneventful stall at the end of a row. I picked it up to have a better look but then thought the better of it as we do have quite enough solitary cups already. Rounding the corner, I saw a bag full of assorted tableware, with not only a second cup but two saucers and two dessert plates as well, both in a quirky octagonal shape.  For € 5, there was no way we were going to leave these behind. The porcelain is quite thick and sturdy and made in Italy. 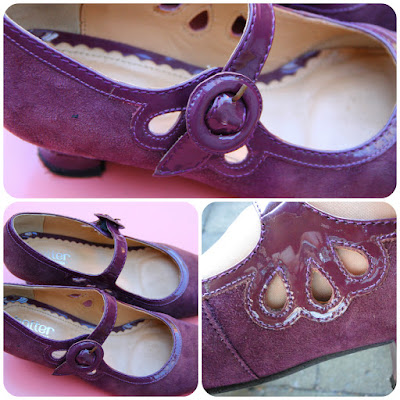 Shortly afterwards, I zoomed in on this pair of suede and patent leather Hotter shoes, still in good nick, and in a lovely burgundy, almost plummy colour. They were a size 5 (I usually take a size 4 to 4 ½) but they were a perfect fit. Even better, they were only € 2!

Some Googling revealed that the model is called Valetta and when I Googled that I came across a blog post from 2012 from Mim! It's a small world, isn't it? 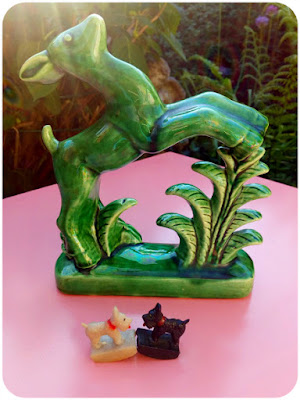 Continuing on our rounds, we happened upon a stall we immediately recognized as Ilona's. She's one of our favourite sellers, with a stall full of the most wondrous stuff, from which we never come away empty handed. 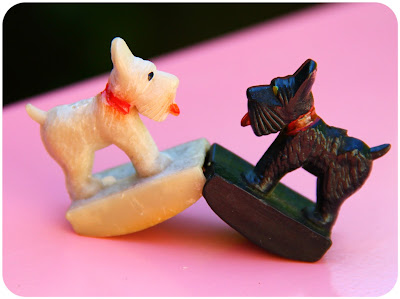 The Scotties are mounted on magnets which, as magnets are wont to do, pulls them together, while at the same time they start chasing one another when one of them turns tail.

Aren't they the cutest pair ever? 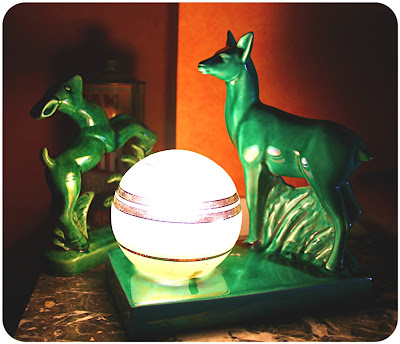 We thought that they could be friends, and here they are, living happily ever after on our mantelpiece.

Then there was a stall selling vintage and retro clothes, where I picked up two deadstock vintage frocks in pristine condition. Quite a rarity these days, especially at flea markets! 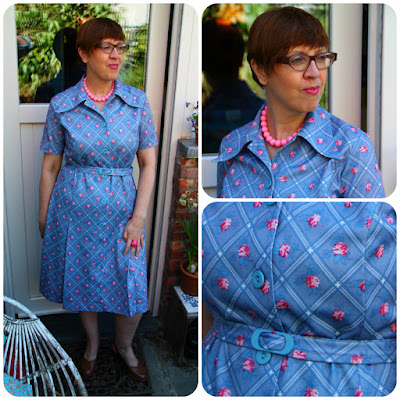 The first one, in blue Trevira with a diamond pattern featuring dainty rose buds, came with a self fabric belt with a slide buckle. 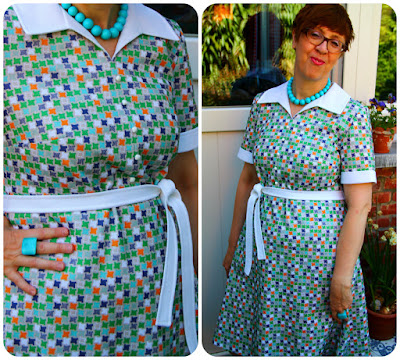 There's no label in this pretty frock, which has a print of tiny squares in different blues, green, orange and white, with a solid white collar and cuffs and a tie belt. I'm sure it would look equally good or even better with a belt in one of the print's colours. 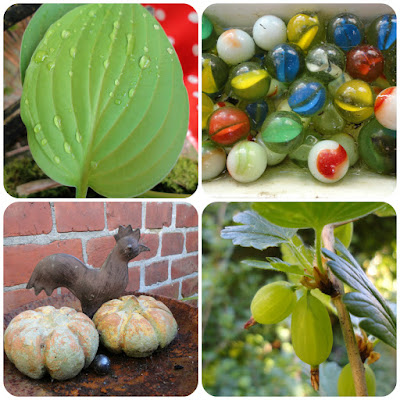 Sunday was spent at home and in the garden, doing nothing much. I'd taken a tumble down the stairs on Saturday night, leaving me with a bruised left arm and painful muscles in both upper arms, so I was sort of licking my wounds!

Anyway, it looks like we will have a bumper crop of gooseberries this year. I don't think we ever had so many. I do hope they will have ripened to a rich red and be ready to eat before we're off to Shropshire mid June. 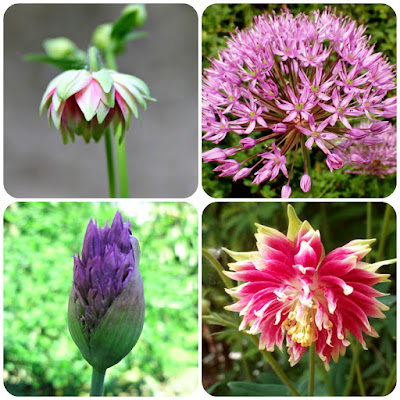 Before I sign off, I wanted to show you two of my garden favourites, which are currently in full bloom, Allium (I think they are  Allium aflatunense, which is the most common type) and Aquilegia 'Nora Barlow' with its double pink blooms with white tips, resembling pom poms!

Watch out for my next post, in which I will regale you with our adventures on our last day in Bruges!

Meanwhile, I'm taking my outfit to Patti's Visible Monday at Not Dead Yet Style!
Posted by Polyester Princess at 19:29