A lawn full of Daisies

There is a garden in every childhood, an enchanted place where colors are brighter,
the air softer, and the morning more fragrant than ever again.
~Through The Garden Gate, Elizabeth Lawrence~

Last Saturday, we packed a picnic and went to the park.

The weather forecast said it was going to be a fine day, so I went bare legged for a change, but even after multiple applications of body lotion lashed with self tan, my legs were still a milky white.

The dress I'm wearing was a last minute choice and in spite of initial misgivings, it turned out to be a good one. It was warm enough to go without a jacket, so I'm just wearing it here for some quick photographs before stuffing it into the boot of our car and setting off.

Strangely enough, the orange felt flower was the only brooch I was wearing that day.  I kept the rest of my accessories in shades of butter fudge brown, in keeping with the flowers in my dress's pattern. 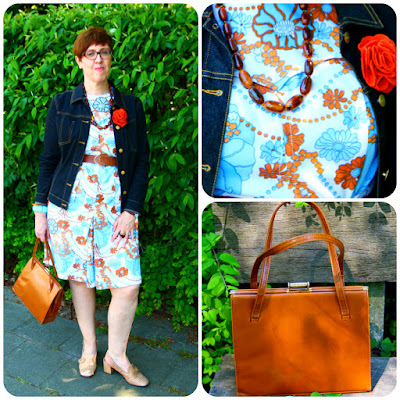 It's mid-May and the park is almost at its lushest. The paths between the trees, meandering and disappearing from sight, hold promises of a fairy land beyond, where ivy cascades over tangled thickets of thorn, growing tendrils in all directions, with Sleeping Beauty's castle tucked away in its heart.

There's a grassy scent in the air, and soon there will be the cloyingly sweet smell of flowering privet hedges, transporting me all the way back to my childhood.

The village I grew up in was still quite rural back in the early sixties. Our house was at the end of a cul-de-sac in a new housing development. Ours was one of the first houses to be built there, so for the first few years we were mostly surrounded by wasteland and semi-meadows. 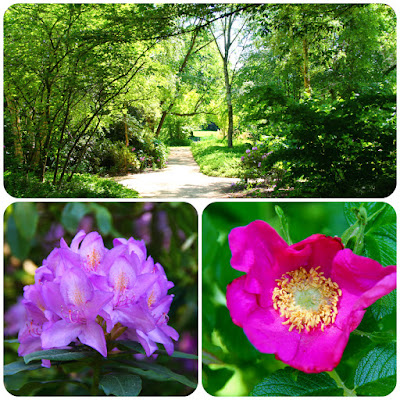 These were the perfect places for adventures involving the building of camps and hide-outs.

I had my first experience of stinging nettles there, and in Spring and Summer there were wildflowers to pick and assemble into small posies, which my mum put in lemonade glasses on the kitchen sill.

Dandelions and Buttercups. Cuckoo Flowers and Campion. And Daisies! Let’s not forget about them! Daisies could be linked into chains and made into crowns which turned little girls into princesses, or fashioned into makeshift jewellery. Their yellow hearts left a pungent smell which clung to my fingers as their “he-loves-me, he-loves-me-not” crowns of pure white petals were blown away by a summer breeze. 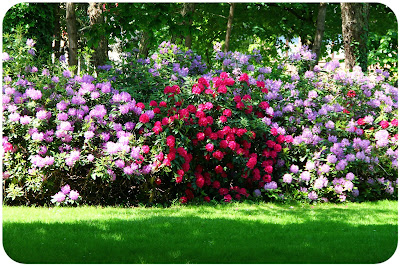 Somehow the days seemed to be longer then - sunnier and more fragrant too. Now the hours seem like mere minutes, chasing each other around the clock until they become days which string together into a row of tomorrows.

The sun was climbing higher, almost reaching her zenith, so we carried our picnic basket to a secluded bench near a bank of lilac rhododendrons. 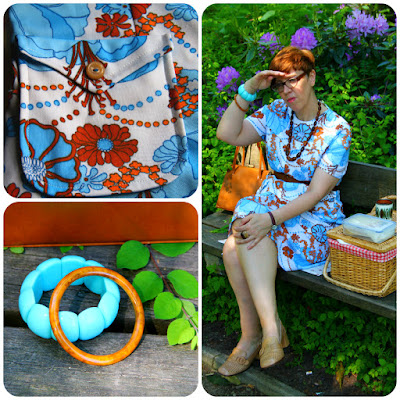 Here you can see one of my dress's redeeming features, two large patch pockets!
They would have come in handy for carrying treasures, but the dresses I wore as a little girl never seemed to have pockets. They were made by my grandmother and all of the same rather shapeless variety, interchangeable but for the fabric they were made of. 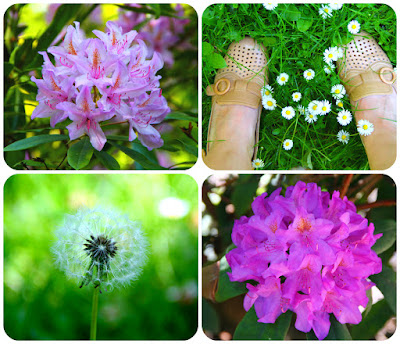 I love Daisies in a lawn, the more the merrier! The little girl in me wants to walk among them barefoot and let them tickle her toes.

There's a sea of fluffy Dandelion spheres too, their seeds drifting like tiny parachutes in a crazy choreography. 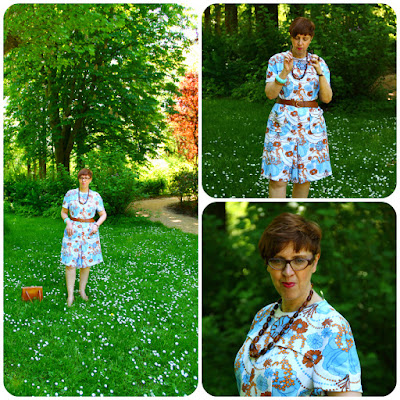 Here's your chance to see me without glasses. In the top right photo I'd taken them off to rub off a fingerprint, just when Jos clicked the shutter. It took me years to reconcile myself to having to wear glasses, preferring contact lenses, but I'm so used to them now that they've become an essential part of me. 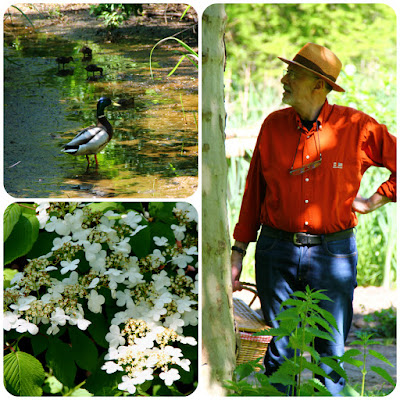 Part of the park's pond has been drained for some reason, and a family of ducks was foraging its silty bottom in search of tasty bites to eat. 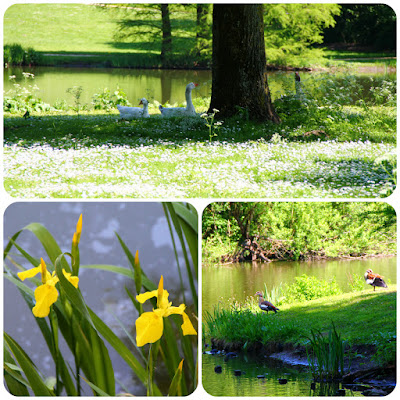 White geese were having a siesta in the shade of a tree, honking lazily at our approach. Oh, it's them, I could almost hear them think!

At the water's edge, clumps of yellow flag Irises were dancing like exotic ballerinas among the reeds. 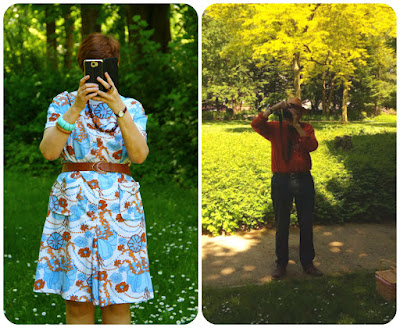 Doing a double take: while Jos was making photographs, I snapped him with my phone's camera, his orange shirt coordinating with the yellow-leaved tree beyond. 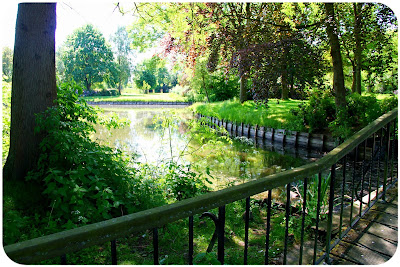 Leaving the park behind, we would have been mad not to visit the nearby charity shop, where one of our first finds was this sturdy wicker basket, a snip at € 0,50. It definitely came in handy for carrying all our other finds!

Then I came across an orange skirt in a light wool fabric, still with its tags on. All skirts were half price, so I paid the princely sum of € 2. As luck would have it, there was a pair of orange shoes in my size as well! They were mine for € 4. 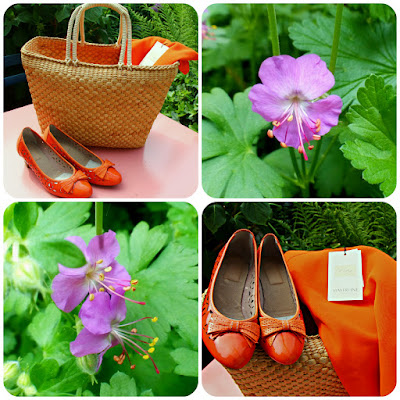 Here's me modelling my orange finds in the garden. I added a short-sleeved white polyester blouse sprinkled with chocolate brown spots in different sizes. They do look a bit like the chocolates at Choco Story in Bruges! 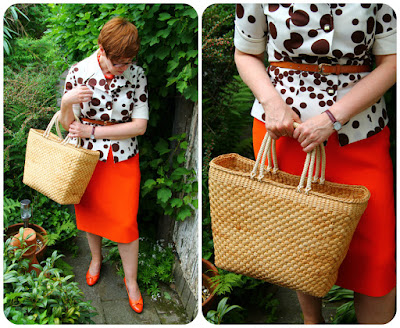 Other finds included two jewellery trees (both € 0,50), which I initially planned to use at my flea market stall in July. Meanwhile, they have already found a home in Dove Cottage.

The jewellery, two necklaces and a bracelet, were charity shopped as wel. 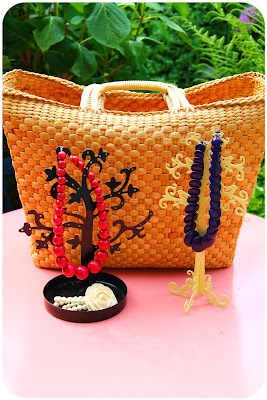 Next up will be not one but two flea markets to go to. I wonder what will cross our paths there!

I'm taking my orange skirt to Patti's Visible Monday at Not Dead Yet Style!