The thrill of the chase

In stark contrast to the grey bank of clouds of Saturday before last, the weather gods decided to grace us with a sky painted in azure blue and lots of sunshine on Sunday.

We couldn't be happier, as we had an outdoor flea market to go to. Not just any flea market, mind you, but a firm favourite, and one of huge proportions. I've heard it said there were 750 stalls, spread out on a grassy field as well as the surrounding streets, where people set up stalls outside their front steps. 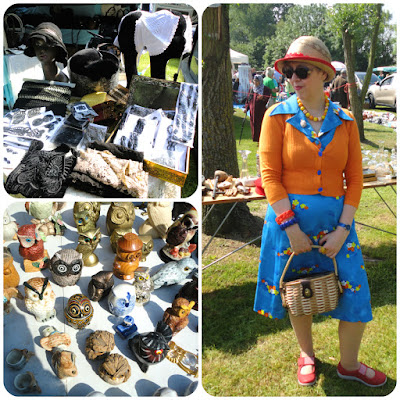 We managed to grab a parking spot about one kilometer away from the market's entrance, and I was glad I was wearing my hat and sunglasses to protect me from the sun's glare when walking up the tarmacked road leading up to the field.

The orange cardigan I started out with was soon packed away!  My Clarks Cloudsteppers, bought in the sales in Aberystwyth last June, had their first outing this year. They really lived up to their name as I walked in them for hours on end without any pinching or rubbing resulting in painful blisters. 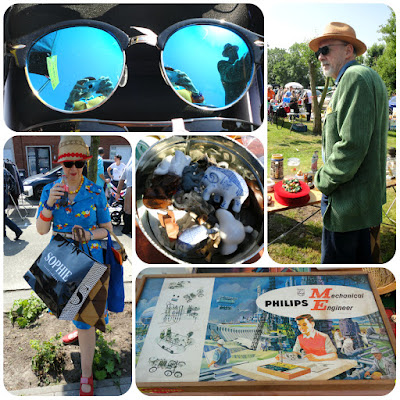 You can probably judge from the amount of bags I'm carrying that it was a huge success!

But before I'm getting down to details, there was a sweet end to our flea market trawl, as we suddenly came upon this colourful stall selling .... cuberdons or "neusjes" (little noses), the sweets after which the room in our B&B near Bruges was called! 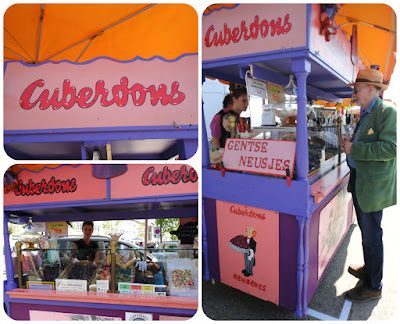 I asked the lovely lady who was running the stall, which is owned by De Neve JiPi, if I could take a photo, and I promised her I'd give them a mention, which is my pleasure, as the "neusjes" we bought from her were fingerlickingly delicious!

Our car was a sauna when we got back, so we opened all doors in an attempt to cool things down a bit, taking the opportunity to take some outfit photos in the meantime. 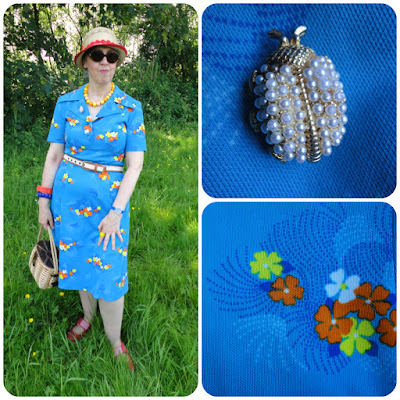 I found the blue dress I'm wearing at Think Twice a couple of weeks ago. It was calling me from afar, as I'd immediately recognized the pattern: I already have this dress in mustard yellow as well!

In keeping with the flower pattern, I added a necklace featuring orange, yellow and white beads and  chose a royal blue bracelet and an orange carved plastic bangle. To the dress's collar I pinned a pearly ladybird brooch. 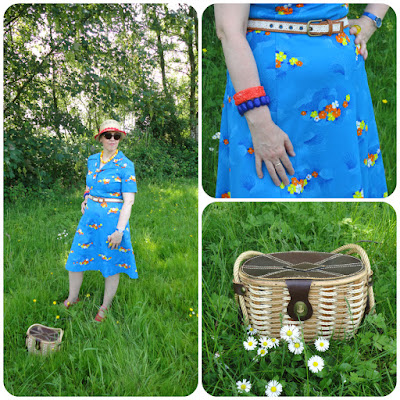 The belt, which is caramel brown with a cream crocheted strip, was a recent charity shop find, and the wicker bag came from the greatly missed Blender Vintage Shop. 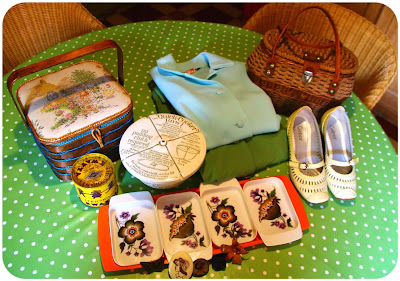 Back at home, we unpacked our treasures, and assembled them for a group photo. Needless to say, we were quite pleased with our finds. 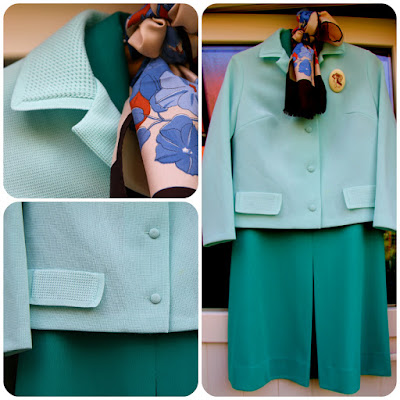 Minutes after entering the field full of stalls, I snapped up this powder blue Crimplene jacket. For its state portrait, it seemed blend to organically with a dress which was hanging outside my wardrobe, so I added a scarf and one of the brooches I'd found to further accessorize it. 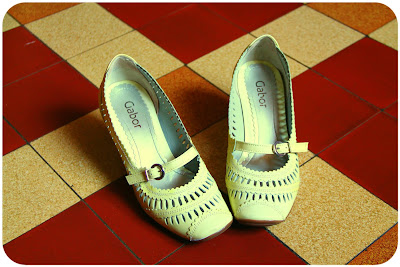 This pristine pair of shoes, in the palest of yellows, was just € 1, so it would have been foolish to leave them behind. 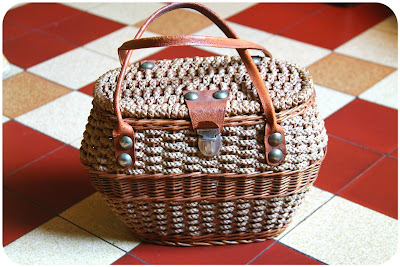 After reading Elle's post on straw and wicker bags, which I'd read the night before, I kept my eyes peeled and found this delightful specimen which I'm sure will have its first outing soon. 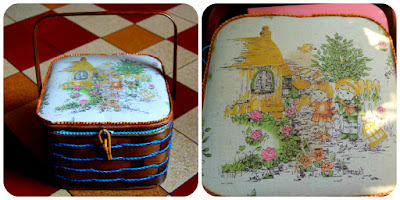 At one of the street stalls I stumbled upon this bamboo sewing basket, which was mine for € 3.

Now, I do have quite enough sewing baskets already, and surely it's too cute to be sitting at home, so I was thinking of using it as a handbag! 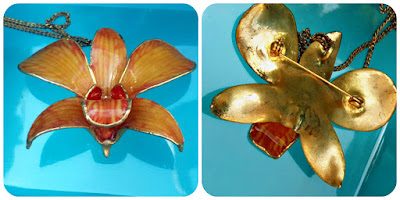 I was very taken by this orchid pendant and it was only after handing over my € 2 that I noticed it doubles as a brooch! 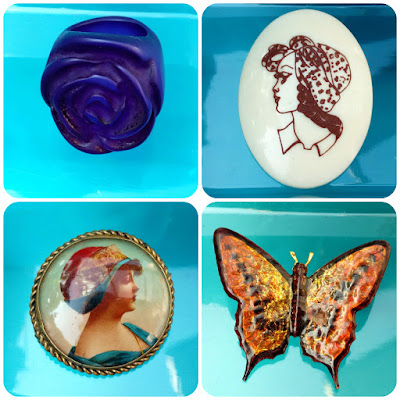 Further jewellery finds were a purple plastic flower ring (it looks bluer here than it actually is!) and three more brooches. I managed to haggle down the price of the gorgeous behatted lady on the bottom left to € 5, which was the highest price I paid for any of them, and surely still a bargain! 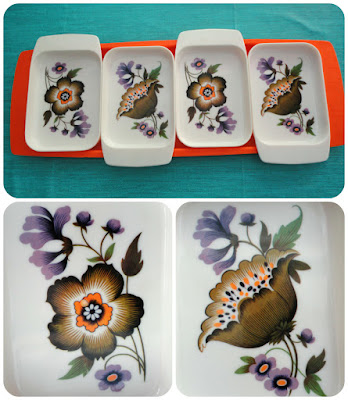 Love at first sight for this vintage serving platter with four individual little dishes. Aren't the colours and the rather unusual flower pattern absolutely gorgeous? 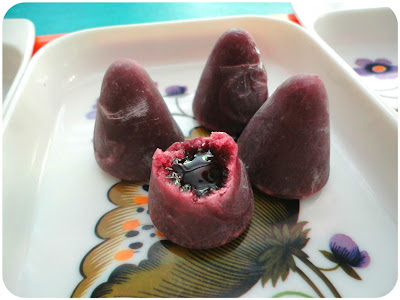 They're perfect for serving "neusjes", that's for sure!

We are not certain of the age of this battered old tin, which used to contain chocolate spread made by Kwatta (a household name in Belgium and the Netherlands), as even good old Google let us down!

As Jos remembers similar packaging from his childhood, we'd like to think it's from the 1950s. 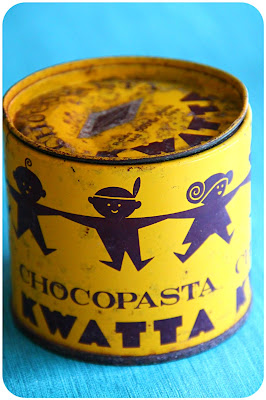 Our last find - but not the least! - is this quirky piece of kitchenalia.

Patented by Grimwades in 1911, we'd only ever come across the "Quick-Cooker Bowl" in the kitchens of stately homes in the UK. I remember photographing one in Scolton Manor in Pembrokeshire back in 2012. 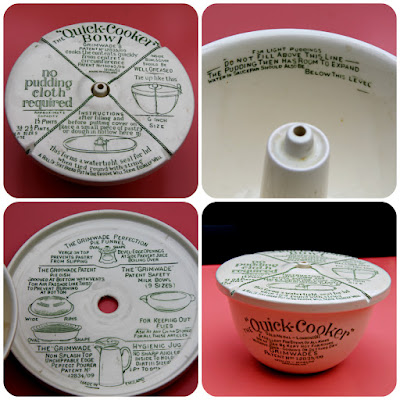 An internal funnel allows steam to circulate through the middle of the pudding and cook it from the inside as well as the outside. The cover is grooved to hold string so the cover and bowl can be tied closely together.

Made of white ceramic, it has green printed pictures and instructions for use on the lid, while the inside is covered with advertising for several of their other products.

Again, we have no idea of its age, but it is very similar to one the V&A has in their collection and which dates from the 1950s.

Who'd have thought that such a piece would turn up at a flea market here in Belgium!

Now, I'm going to head over and join the party at Patti's Visible Monday at Not Dead Yet Style!