Having a nosey in Bruges

On the occasion of Jos's last birthday back in September, he was given a delightful present by his children in the form of vouchers to be spent on hotel or B&B accommodation in Flanders.

With a huge selection of places to choose from, we finally settled on a weekend away to what is probably Belgium's most well-known city, Bruges. With millions of tourists flocking to the city to see its picture postcard perfectness (its historic centre is a UNESCO World Heritage Site), it has got its fair share of places to stay, but we opted for a quiet B&B about 15 kilometers away. 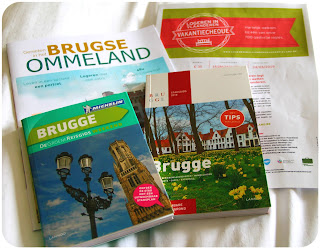 We wanted this to be a Spring break, so the last weekend of April seemed perfect. Wasn't it just our luck though that, after the summery weather of the week before, the temperature was about to drop dramatically, to a measly 10°C and less!

I'd fretted about what to pack for weeks, but in the end, choosing three outfits based on what remained of my long-sleeved frocks proved to be easy. Maybe there is something to be said for a capsule wardrobe after all ... Just kidding! I added three options of cardigans and opaques, some things to be layered underneath, and that was it: I don't think I ever travelled this light.

As the weather forecast was so dire, I did have to dig out one of my Winter coats again. And here I was hoping I'd said goodbye to them for at least six months! 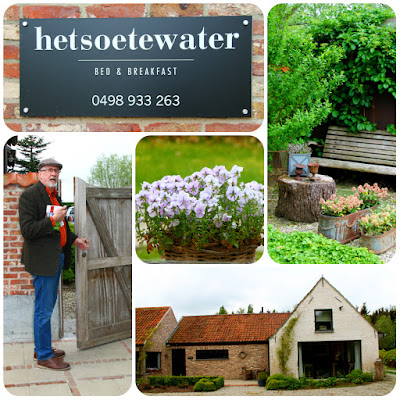 Taking just over an hour's drive from Dove Cottage, we arrived at our B&B, Het Soetewater, around 2 pm on Saturday, and were greeted by our host, Veronique, with coffee and cakes, which we had in the breakfast room.

At one end of the room, a sofa and chairs were arranged in front of a fireplace which was lit in the evenings to take the chill away. 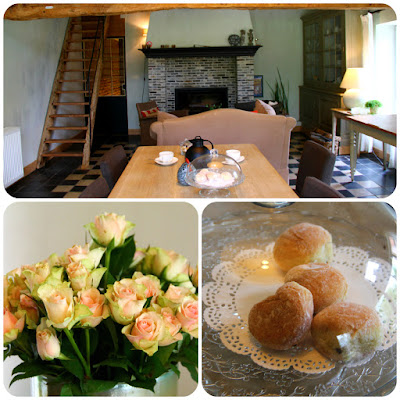 Our room was reached through the door behind the stairs, where a strip of light at ground level in the corridor turned on automatically upon entering.

The door you can see on the left led to our room, which was called Cuberdon. I can see quite a few raised eyebrows there, as I'm sure that most of my non-Belgian readers haven't got a clue what a Cuberdon is. 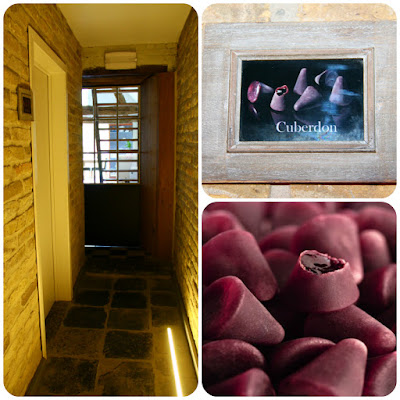 Well, I'm no longer keeping you in suspense: it's a traditional Belgian sweet. This cone-shaped, purplish candy has the texture of soft licorice, with a darker purple, gooey centre. I have seen the taste described as raspberry, but to me it has a rather indistinct sweet taste. The Flemish colloquial name for the sweets is "neuzekes", meaning small noses.

By now, I guess you are wondering what all this has got to do with our room, but read on, and all will be revealed. 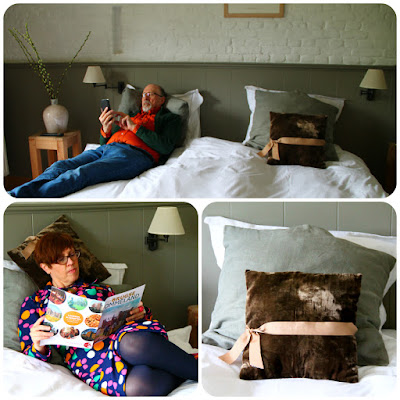 The rooms are situated in the former outbuildings of the farm which used to belong to Veronique's parents, and here and there you can still see some of the original features, such as the traditional tiled floor and the wooden beams in the breakfast room, and the brick wall behind the bed in our room. 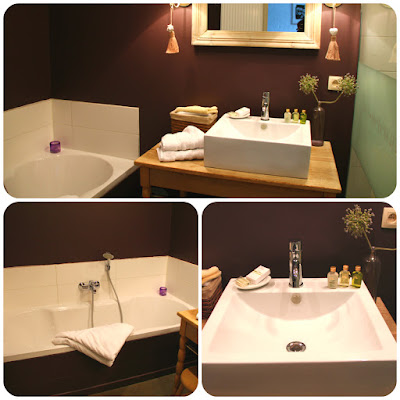 The bathroom, with a bath and a shower, and much bigger than Dove Cottage's, was painted in Cuberdon colour, or at least a colour reminiscent of the gooey centre of the sweets. So, there you have your explanation! 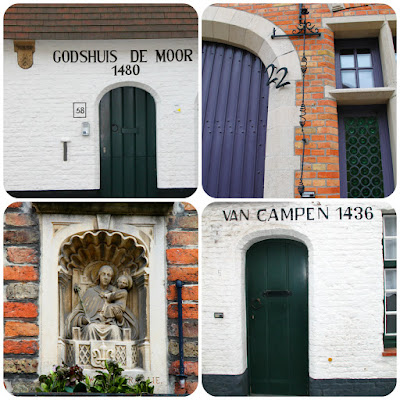 The afternoon was getting on by then, so we decided to make a first trip into Bruges. We'd planned to park near the city centre, but the underground car park where we'd parked on a previous visit was full. When then made our way to the station, where there's a huge and reasonably cheap car park, passing several others, also full, along the way. Well, what did we expect? It was a Saturday afternoon after all, and this was Bruges, where it always seems to be teeming with tourists and day-trippers.

We finally found a parking space at the far side of the station from where it was a ten minute walk to the city centre. 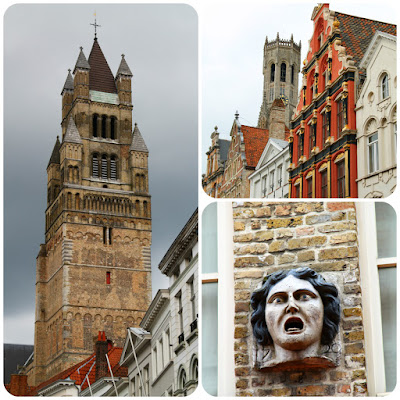 Once we reached the city's main shopping streets, the throngs of people were becoming  nearly impassible and the only thing to be done was to let us be swept along in their tide until the main square, the Markt, was reached.

Pointing my camera upwards, I tried to ignore the crowds. Looking at the artwork on one of the buildings, I'm quite sure it was a mirror image of my face at that point! 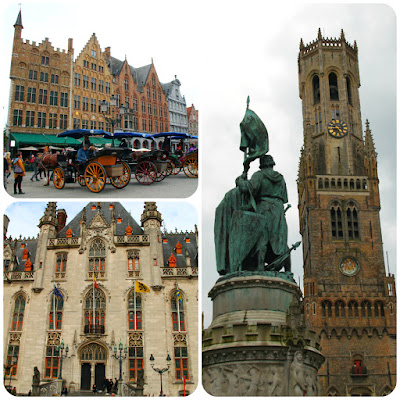 It wasn't less crowded on the Markt, but here people dispersed in all directions, some of them making for the horse-drawn carriages, a traditional way to see the splendour of the city.

Others were admiring the biscuit tin worthy buildings lining the Markt, with the Provincial Palace built in Gothic revival style (bottom left) on one side, or straining their necks to see the the medieval Belfry, which stands 83 metres tall and dominates the square. 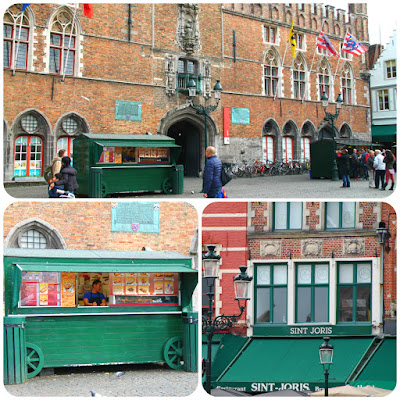 In front of the Belfry are two green wooden "frietkoten". "Frietkot" is Flemish colloquial for "frituur", that Belgian institution selling "frites" or Belgian (not French!) fries, as ubiquitous as the British chip shop. These two date from 1897 and the rumours that one is always busier than the other seem to be quite true!

We were getting quite peckish by then but, rather than trying one of the above, we made our way to one of the restaurants housed in a row of gabled buildings across the square. After a quick look at the menu, we decided on St. Joris, where we had a proper sit-down meal on the - admittedly covered and heated - terrace. 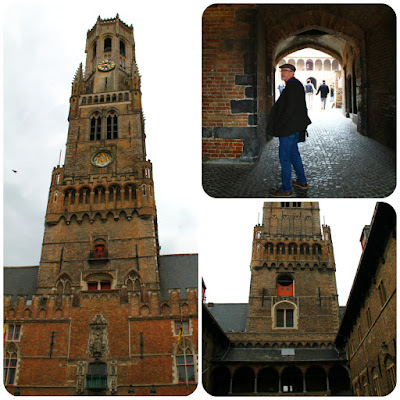 Afterwards, we recrossed the square to investigate the Belfry and the market building, or Hallen, at its base, using the underpass to enter the rectangular courtyard, overlooked by a long line of galleries, which originally served as the town's market.

On the north side of the courtyard, up a flight of stone steps, is the belfry's entrance, where you can climb a narrow staircase of 366 steps to the top of the tower, your efforts rewarded with a undoubtedly breath-taking view. Mercifully, at the time of visiting, it was after closing time, so that I wasn't tempted to put my long-suffering knee through this ordeal. 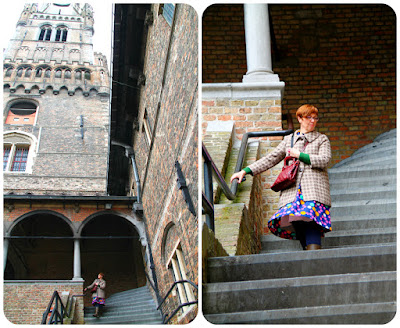 I did make my way up the curving stone steps to the first floor gallery and, making my way down again, Jos caught this photo of me, showing a glimpse of my petticoat. Naughty! 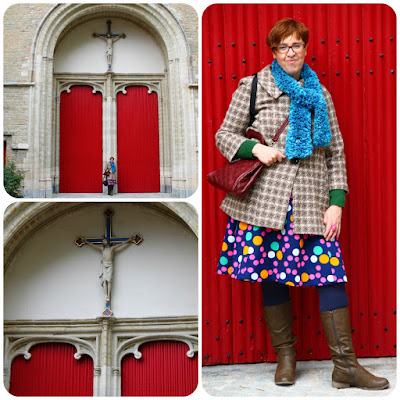 We returned to the station by way of some quieter back streets, taking the opportunity to pose for outfit photos with the brilliant red doors of Sint-Salvatorskathedraal (Saint Saviour's Cathedral), Bruges’oldest parish church (12th–15th century) as a background.

Unfortunately you can only see part of my blue long-sleeved frock with its multicoloured spots (you can see a full picture here) and my green cardi peeping out from the three-quarter length sleeves of my swing coat.

The frilly turquoise scarf was a godsend and so were the comfortable boot, which I can definitely say were made for walking. I chose my burgundy cross-body handbag, which wasn't too bulky and allowed me to keep my hands free for taking photographs. Far too many photographs, I might add. 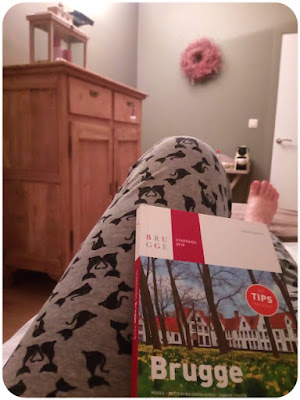 Then it was back to our cosy B&B to rest and make plans for the next day. Note the wearing of the fashionable travelling Phoebe pants!

I hope you'll join me again for our first full day in Bruges in my next post.