At the time of writing, the long-awaited, longed-for Easter weekend is drawing to its end.

Four days, which seemed like an eternity, full of endless possibilities: they were over in the blink of an eye. 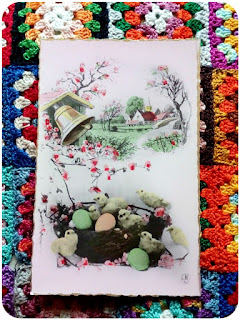 With nothing planned on Good Friday, we decided to go with the flow, and started the day with a leisurely breakfast.

Deliciously fragrant hot cross buns, a pot of freshly brewed coffee and a hearty omelette: could there be a better start of a day? 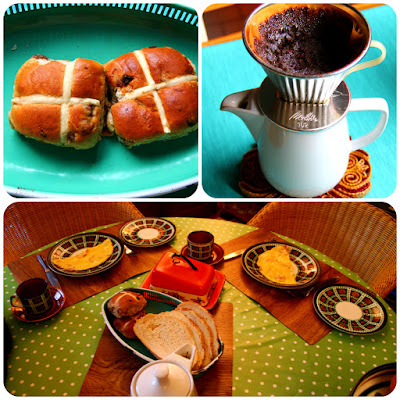 The weather forecast said there would be rain but as the sun was still out in full force after we'd finished breakfast, I decided to put my lazy bones into action. I donned my gardening gear, grabbed my trusty pair of secateurs and went outside. 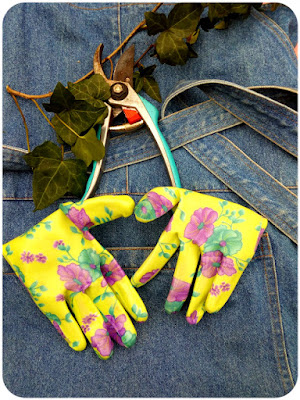 I pruned the Hydrangea bush, which is full of fat buds, cleared away some of last season's fern fronds and cut back some of our rampant ivy.

It's just the tip of the iceberg as it will take a lot more to tame our neglected wilderness, but it's a start. 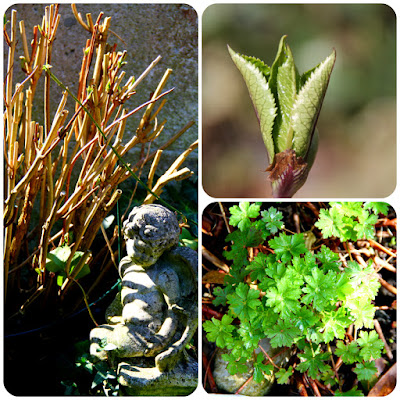 Exploring our handkerchief sized plot, I was happy to discover that Spring is about to happen, no matter what.

Our pot of rhubarb is coming along fine, showing its first fleshy reddish stalks, so we'd better plant it out soon.

Several clumps of Aquilegia are unfurling their leaves, promising a glut of frilly bonnets in just a few months time. 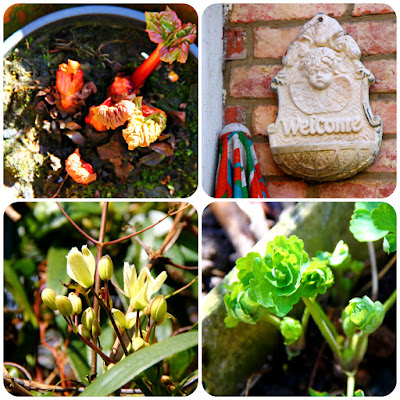 Clematis armandii, growing happily and quite rampantly through our huge Lilac bush, is opening the first of its many creamy white, starry flowers. 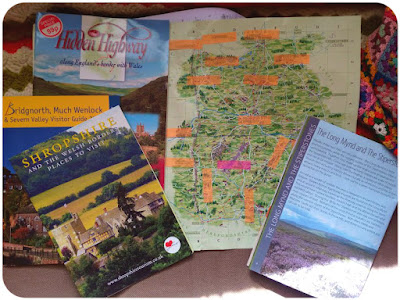 But Spring is such a fickle and quite cruel thing!

Soon the sun started playing a game of hide-and-seek, then disappeared altogether, laughing behind our backs as once again we'd been tricked into thinking Spring had actually started.

Time to settle on the couch with a batch of brochures and plan our Summer holiday! 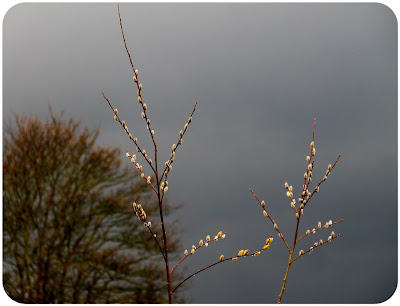 The day ended with torrential rain beating against our windows and I could only hope that next day, Saturday, would be better, as I had plans! 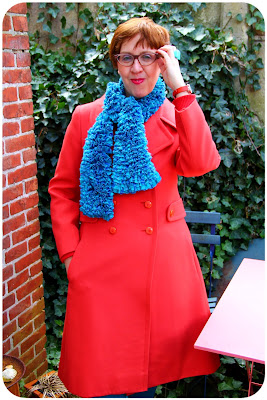 And it was! We were greeted by the sun when we got up. She knows how to play with our hearts, making it jump for joy when she's dispensing her warmth and displaying skies of azure blue.

Quite fed up with my Winter coats, I pulled this coral red new wool Spring coat from my wardrobe. Originally from a posh Brussels shop, it was charity shopped back in October, and this was actually its first wear. 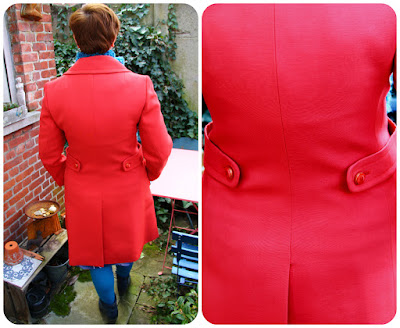 It's got satisfyingly deep pockets and look at that gorgeous half belt, with buttons at both ends. 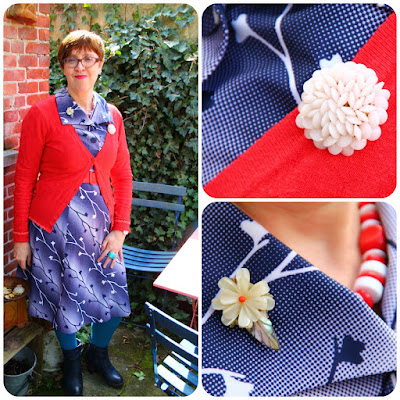 The three-quarter sleeved blue and white Finnish made Misstex frock has a green, short-sleeved sister in my Summer wardrobe.

I pinned a vintage Daisy brooch to its collar, added the red and white vintage necklace I found last weekend and cinched in the waist with a red belt. 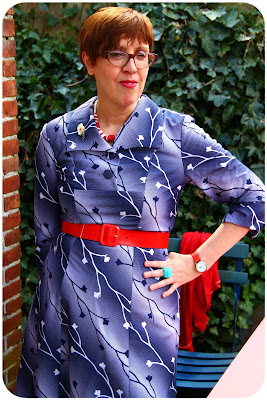 It was still rather chilly in the morning, so I wore a red new-to-me cardigan from retro label Zoë Loveborn on top. The 1950s brooch I pinned to it was one of my very first vintage brooches! 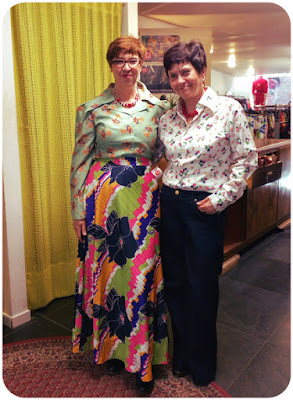 I had a date with my friends Ingrid and Inez to go vintage shopping in Antwerp. Although I usually avoid the city like the plague during weekends, I gladly made an exception.

All three Think Twice shops were visited, with a coffee break in between. Ingrid bought the vintage deadstock blouse, among other things, and the maxi skirt and blouse I'm wearing here were my two buys. 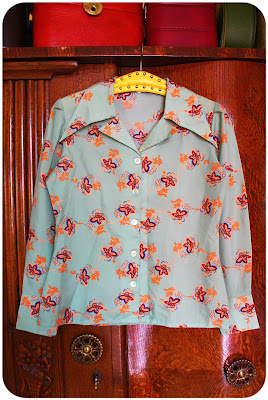 While you will get to see the maxi in its full glory in my next post, here is a closer look of the blouse which, with its fresh green colour (the photo doesn't really do it justice) and orange and navy flower print, clearly had my name on it. 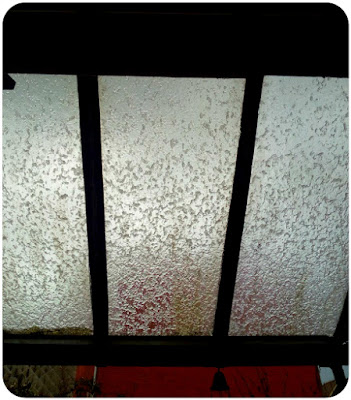 Back at home, we were regaled with a thunderstorm, all fire and brimstone and accompanied by hailstones.

Anyway, Easter Sunday took us a couple of steps back into significantly colder weather, firmly above freezing point but with a definite chill in the air and a thick layer of clouds which couldn't be pierced by the sun, however hard she tried. 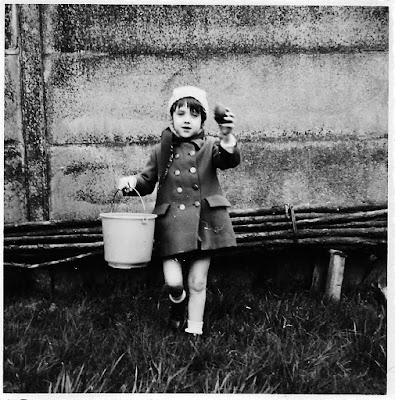 Typical Easter weather? Well, yes, judging from the coat, scarf and woolly bonnet I was wearing for Easter egg hunt back in 1966.

Linking Saturday's blue, white and red outfit to Patti's Visible Monday at Not Dead Yet Style!