Never mind the weather, we are always looking forward to the Easter edition of our favourite indoor flea market.

I was adamant to wear my newly acquired maxi skirt which, miraculously, is exactly the right length to wear with comfortable, medium heeled booties, which are a necessity for tackling the flea market's many aisles. 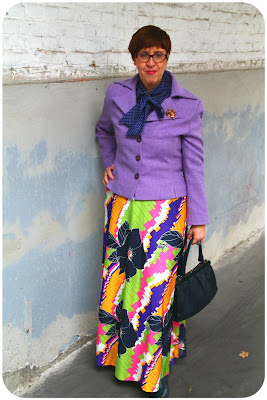 With all the different colours going on, you'd think it would be a doddle to combine but, being more than bored with my Winter stuff, I felt quite uninspired. It was way too cold to wear a short-sleeved top, and none of my long-sleeved ones really pushed the right buttons.

I finally settled for this navy polka dot pussy bow blouse. Its fabric is quite thin, almost sheer really, but I made sure to wear the necessary layers underneath. The upside of the thin fabric is that it makes the pussy bow satisfyingly floppy, so that it could be draped over my jacket without being too bulky. 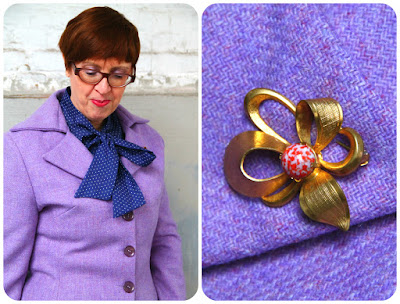 I  had another wobble when it came to choosing outerwear. The temperature had dropped several degrees since Saturday and although one of my fur-collared jackets would have been more weather appropriate, they would have rather spoiled the look I was after.

I can tell you I was feeling the cold in my lighter weight lilac jacket but once inside the flea market venue it was exactly warm enough, especially with my cardigan underneath. 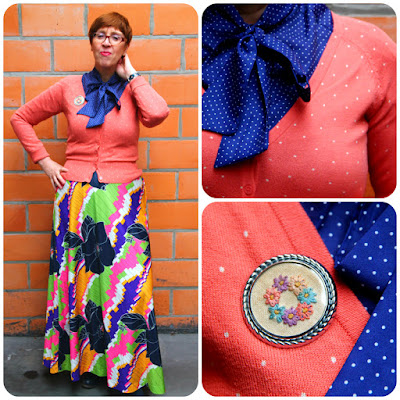 I added another layer of polka dots by wearing this ancient coral cardigan, which has been in my wardrobe forever. The brooch I pinned to it has a wreath of embroidered flowers in sugary Spring colours. 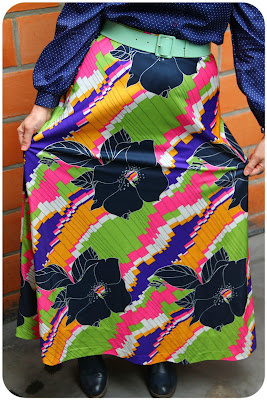 Here's a close-up of the skirt's gorgeous print.

There is no label identifying the fabric contents, but it feels soft and silky, and it received quite a few admiring glances and compliments at the flea market. 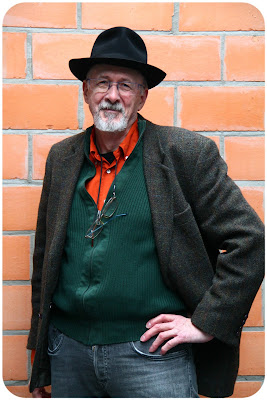 I'm sure you've had quite enough of the skirt by now, so here's Jos posing like a pro, wearing his  charity shopped orange River Woods shirt and Harris Tweed jacket! 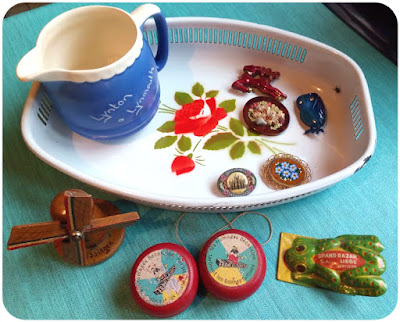 Back to the flea market, which wasn't as huge as usual. That wasn't necessarily a bad thing, as we often have to drag ourselves through the last aisles and, with so many stalls offering a plethora of things, it can sometimes be quite overwhelming. 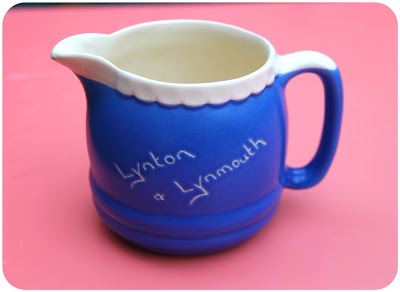 We always start at the same stall, which has tables full of the most wonderful trinkets. Hardly a month goes by when we don't buy anything here. This is where we found the Art Deco egg cups last month and the flower shaped Avon soaps back in February.

I saw some blue and white pottery lurking at the bottom of a carton. When I'd gingerly pulled it out it turned out to be a Devon Blue Ware jug, as I'd suspected all along.

I'm sure those of you living in the UK will be familiar with these souvenir pottery items, which sometimes turn up in charity shops, while antique shops seem to be having them in abundance. There was one in our cottage in Wales mentioning Devil's Bridge.

As luck would have it, we have actually been to Lynton & Lynmouth in North Devon, back in 1997. 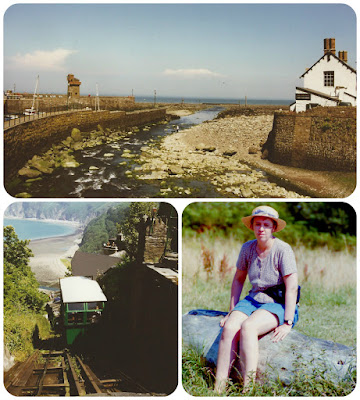 Clockwise from top: Lynmouth, where we bagged the last parking spot, 36-year-old
me wearing shorts, and the cliff railway descending from Lynton to Lynmouth


Our next stop was Tania's stall, another treasure trove of desirable objects. We always stop for a chat and usually find something that catches our eye. This time, a vintage enamelware bread basket came home with us. 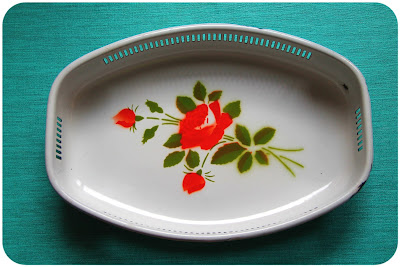 I can never resist kitsch souvenir items, so when I picked up this tiny wooden windmill, a souvenir from Vlissingen in Holland, Tania gave it to me for free as an Easter present! Isn't she a darling? 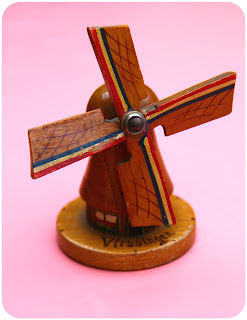 It will be joining the Wall of Windmills in our entrance hall.

Souvenirs of a different kind came in the form of these small vintage toys, which Jos remembers from his childhood.

On the left, a small tin frog, advertising Grand Bazar department stores, a true Belgian institution, sadly no longer in business. The frog is making a clicking sound when you push a piece of bendy metal on the back and let go. 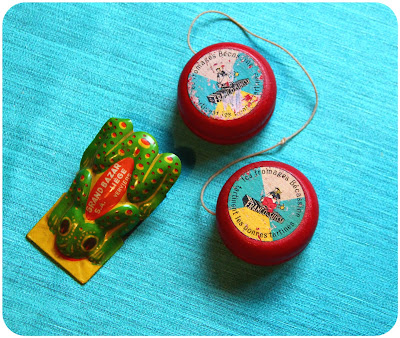 Jos remembers that it was given to him as a young boy when visiting Grand Bazar in Antwerp (the frog we found is from the Liège store) on the occasion of Sinterklaas (St. Nicholas, celebrated on 6 December), when in the weeks leading up to the big day, children patiently awaited their turn to approach the throne he was perched upon on the top floor of the store.

When Jos was telling me about this, he suddenly remembered the existence of this photo! 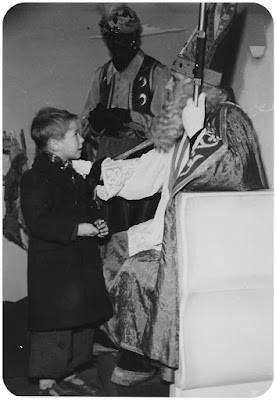 Little Jos with Sinterklaas in the 1950s

Can you imagine the racket made by literally hundreds of kids clicking their frogs while traipsing behind their parents going down the escalators, the sound of it echoing in the cathedral-like building?

You will probably have guessed that the two round objects on the right are yo-yo's?

These too were a blast from the past for Jos, who had the exact same yo-yo back in the 1950s. They are advertising Bécassine processed cheese, which was produced by a company called Franco-Suisse.

He has no idea where it came from but it might have been given to him when visiting Expo 58 where the company had a pavillion.

While I was researching Bécassine and trying to find out more about the cheese, it struck me that a lot of the images coming up were of comic strips.

It turns out that Bécassine is an iconic French comic strip heroine, going back to 1905. She is considered the first female protagonist in the history of French comics. The character Bécassine is a young Breton housemaid, usually depicted wearing a green dress, lace cap and clogs, as a pastiche of traditional Breton peasant costume.

I'd never have known this if it hadn't been for blogging! 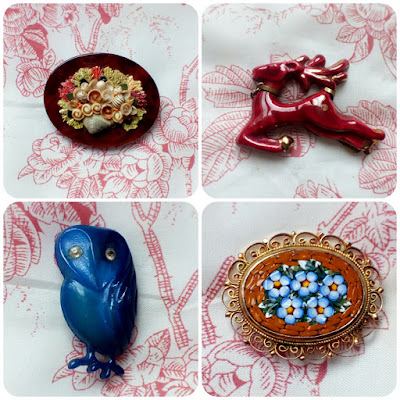 The flea market has lots of stalls selling jewellery in all price ranges, from the cheap 'n cheerful to the ridiculously expensive. By keeping an eye out and making the effort to rummage in boxes and trays full of cheap tat, I have so far managed to find the majority of my brooches at reasonable prices.

Both the wooden brooch on the top left, encrusted with tiny shells, and the 1950s ceramic leaping deer were mine for € 5, while poor cross-eyed Mr. Owl was just € 1.

There are certain categories of brooches I'm expecting to pay a bit more for. A case in point are the delicate Italian made micromosaic brooches. One has to examine them very carefully, as sometimes some of the tiny tesserae tiles are missing and, although I don't really mind if it's a particularly nice one, I obviously don't want to pay over the odds for them. 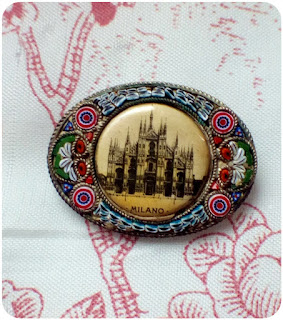 It was love at first sight for the sweet little forget-me-nots framed in ochre and the Milan souvenir brooch containing a picture of Milan's famous cathedral, the Duomo, surrounded by the most exquisite micromosaic border.

We will now have to wait until well into May for the next indoor flea market but until then there are the first outdoor ones to look forward to. For these, of course, we do need Spring's full cooperation!