I bet you're all dying to know what we bought at the castle so, without further ado, let's have a peek at the things which came home with us. 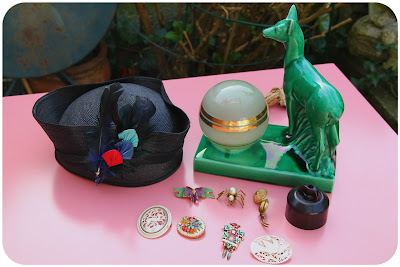 And the winner is ... Sheila! You were spot on, dahling! Well done! We bought the green deer, which is actually a  lamp. A 1930s Art-Deco lamp to be more exactly.
I mean, it's green, it's a deer and it's Art-Deco: if ever an object ticked all the right boxes, then this is it.

The wiring was a bit dodgy, so Jos, who's a skilled electrician, changed it and added another lamp fitting and hey presto: less than a day later it was already taking pride of place on our sitting room's mantelpiece. 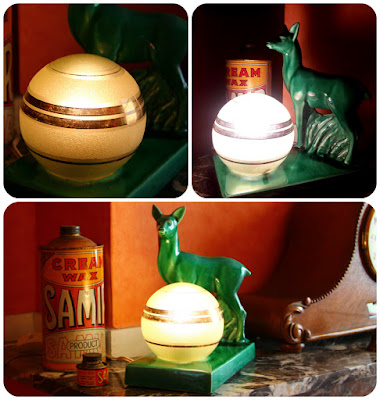 Dove Cottage actually dates from the 1930s, so it couldn't have come to a better place, even if it does have to share the limelight with several other favourites.

Centre stage is taken by this pretty wooden pendulum clock, which Jos found at a local junk shop.

On its left, behind the deer, is a vintage floor and furniture wax canister. This, as well as the tiny sample pot next to it, was gifted to us by my parents around the time we moved into Dove Cottage, and have been in the same spot on the mantelpiece for coming up to twenty years now. They both came from a shop in our village, which used to be owned by a great aunt, one of my maternal grandfather's sisters. The shop, of course, is long gone, but I walk past the house it was in every weekday morning on my way to the bus stop. 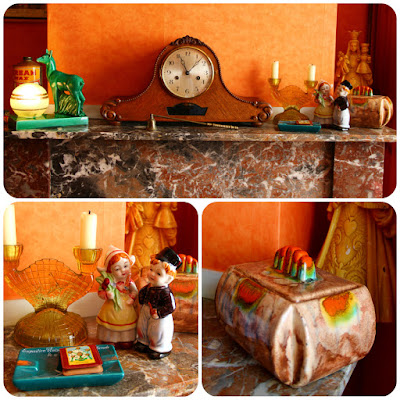 Moving to the right now, where there's a motley crew of objects vying for attention. The amber glass candlestick is 1930s as well, and so is the Art-Deco bonbonnière on the bottom right. The ceramic couple, wearing traditional Dutch costume, is identical to the pair I used to play with when staying at my paternal grandparents, resulting in quite a few breakages and the ensuing gluing on of heads!

In front is a souvenir ashtray from Expo 58, the famous Brussels World Fair, containing a souvenir book of matches with an image of the Atomium.

Lurking in the recess is a plaster statue of Our Lady of Boom, which we picked up in a charity shop. Boom (the "oo" is pronounced like the "o" in bone) is the town where Jos grew up. 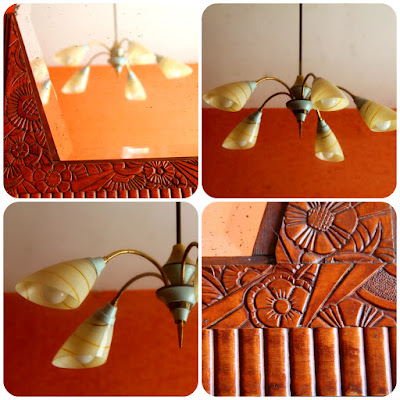 Above the mantelpiece is a mirror in a gorgeous wooden Art-Deco frame, which was going for a song in a charity shop as its glass is riddled with black spots. Reflected in the mirror is our 1950s light fitting, also charity shopped. 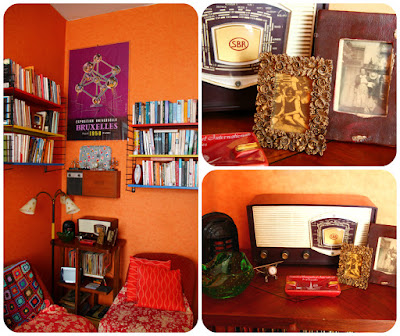 This cosy corner in our sitting room is a meeting of styles from different decades. The chairs are 1950s which we had to Phoebe-proof with plaids. The metal shelving, produced by Dutch company Tomado, and currently highly collectible, is 1950s as well, and so, of course, is the framed Expo 58 poster.

Back to the 1930s with the inlaid wooden side table. On top, a late 1950s Bakelite radio. The framed photographs are of my grandparents in old-fashioned bathing suits at the seaside (left) and Jos's mother carrying one of her plants on the right. 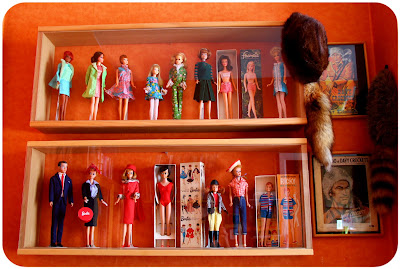 Opposite this corner and above the modern flat screen television (we do have some mod cons!) are two display cases carrying the poshest of my Barbies, with some of Jos's Davy Crockett collection on the right. 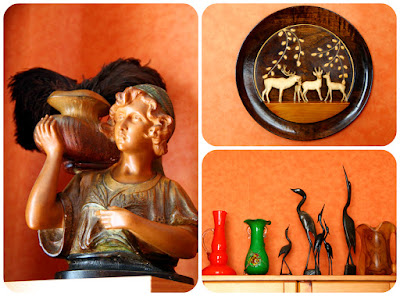 Is it a boy or a girl? I've never been absolutely sure, but he or she is carrying a jug of ostrich feathers, very fashionable in the 1920's.

I couldn't resist the kitsch wooden wall plaque with a tableau of plastic deer, going for € 0,50 in a charity shop. The display of vases and birds on the bottom right is sitting on top of a cabinet.

I'm the first to plead guilty when it comes to clutter, but all these objects have a soul and a story to tell. They have found a place, not only inside Dove Cottage, but in my heart as well. 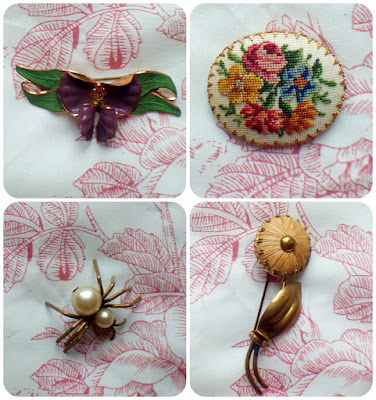 After this little detour, it's back to the rest of our finds.

As you'd probably expected, I bought several brooches. I selected four from the Brooch Lady's folders, and found another three at one of the stalls upstairs. 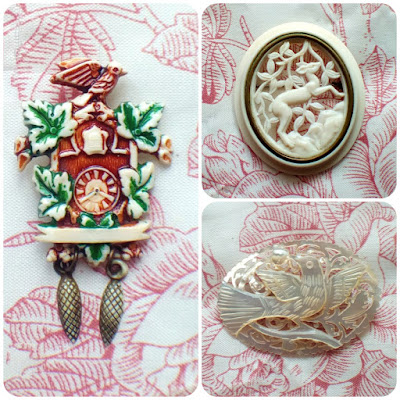 How cute is that cuckoo clock? The celluloid deer and the carved mother-of-pearl bird brooch were just € 5 and € 7, which is quite cheap. They both needed cleaning, but just soaking them in soapy water already lifted most of the dirt. Have you noticed the stylish little hat in the group picture? The minute I laid eyes on it, I was in love. The stall's owner urged me to try on a rather spectacular 1920s cloche hat, but I had my heart set on this one, even though it didn't come cheap.

I thought it would rather suit the snooty Idina, so here she is modelling it for you! 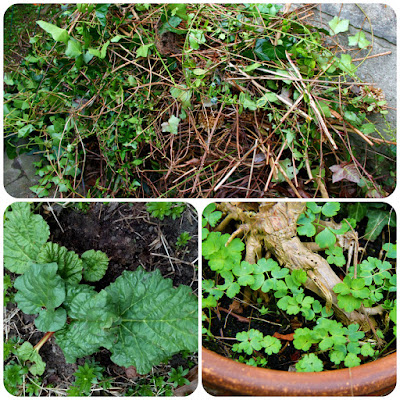 The weather continued to be fine on Sunday (I'm still rambling on about last week here) so we spent a bit of time in the garden. I'd already done some serious pruning on Friday afternoon, getting rid of some of the exuberant ivy which is threatening to take over our little plot. A huge heap of twigs and cuttings is now ready to be collected by the town council in a week or two.

We also planted out our poor rhubarb plant which had been waiting patiently in its pot. No need to plant any more Aquilegia, as they self-seed like mad: look at those little seedlings huddling together in this terracotta planter, abandoned after the demise of its original inhabitant. 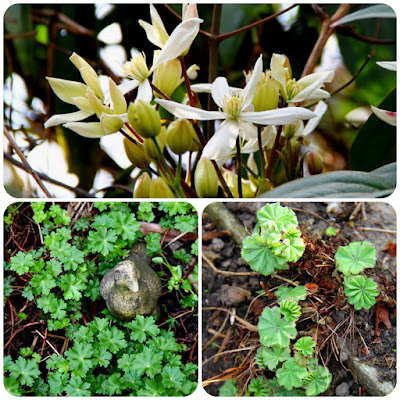 More signs of Spring in other parts of the garden. Our Clematis armandii is slowly reaching its zenith, the warmth of the sun releasing its heavenly almond scent. The little stone dove will soon be surrounded by the small pink flowers of our ground-covering Geranium, while Alchemilla mollis, commonly known as Lady's Mantle, is one by one unfurling its downy leaves. Quite unexpected, as I'm sure I didn't plant it there. Yet another of our self seeders! 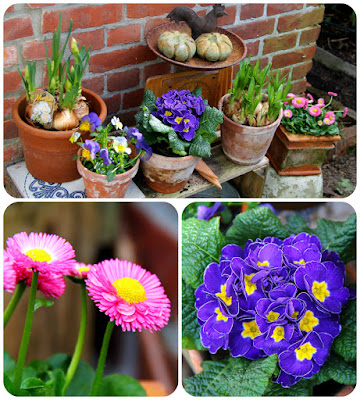 As much as I love green, our garden was sorely in need of a bit more colour, so we made a trip to the garden centre to pick up some flowering Spring plants. 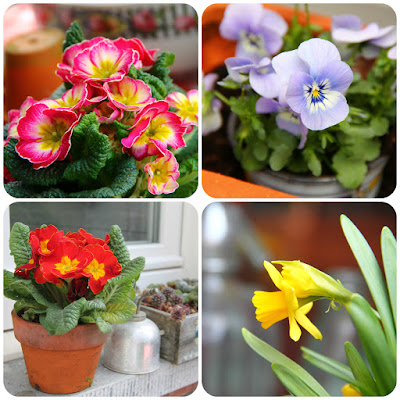 You've got to love a bit of flower power ...

I'm not very visible in this post, so I will take Idina and her fabulous new hat to Patti's Visible Monday at Not Dead Yet Style this week!