And the daffodils look lovely today

Last weekend Spring decided to show us her true colours by giving us a glimmer of hope in the form of two perfectly formed early Spring days.

Perfect for venturing out into the garden for some pruning, or for going on a long walk, but I was lacking the energy and my mood was strangely at odds with the weather.

I do try to avoid too much moaning on the blog, but life isn't all ha ha hee hee, you know. I am shamelessly quoting Meera Syal's novel of the same name! 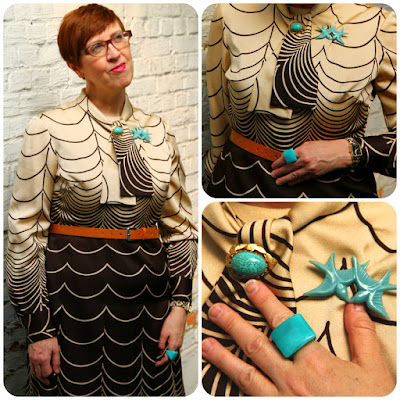 Dressing up never fails to cheer me up, though, so here I am faking it until the fog in my head has cleared.

Beige and brown doesn't have to be boring! Proof is in this frock, which has one of the funkiest prints ever! The fabric is seriously swishy too. I pinned not one but two brooches on it: a mottled turquoise stone rimmed in gold metal to keep the frock's tie from, err... untying, and a pair of turquoise swallows in flight. They're modern, and I have them in green as well.

Other accessories included a turquoise chunky plastic ring and a tan belt.

This frock is actually a film star! Here I was re-watching a Flemish film on the telly, called Groenten uit Balen (2011), which is set in 1971, when all of a sudden there was one of the actresses wearing my dress! 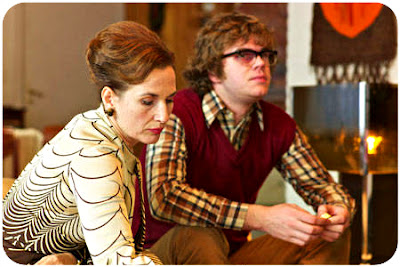 A turquoise cardigan went on top, which meant I could add another brooch. This is one of the embroidered brooches I picked up at a Carmarthen antique shop last June. The majority of these kind of brooches feature flowers, and I especially love this one with its tiny gentians.

I completed my outfit with turquoise opaques and tan ankle boots. 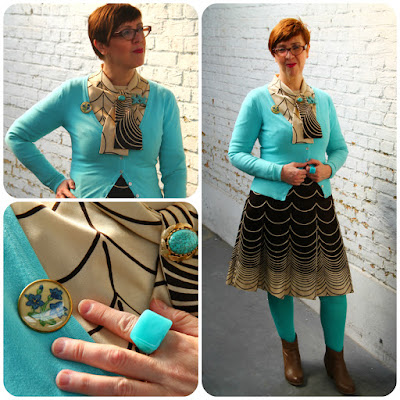 It might have been Spring, but it's early days yet, so a jacket was still required. I could have opted for a lighter one, but that would have involved digging into the depths of our coats wardrobe.

I also could have done without a scarf, but old habits die hard, so I chose the frilly one I charity shopped earlier this month. It looks deceptively light but was in fact quite heavy and warm.

Notice that I'm not wearing a beret! I admit I did feel quite lost without one. 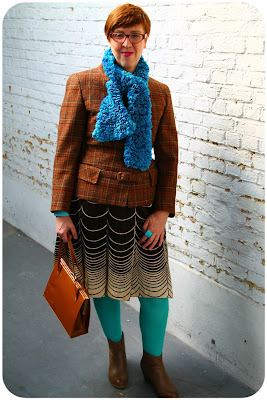 We went for a short stroll in the park, which only weeks ago was a wiry tangle of last season's growth, with unruly twigs and branches and the sodden and sordid remains of late Summer and Autumn perennials. 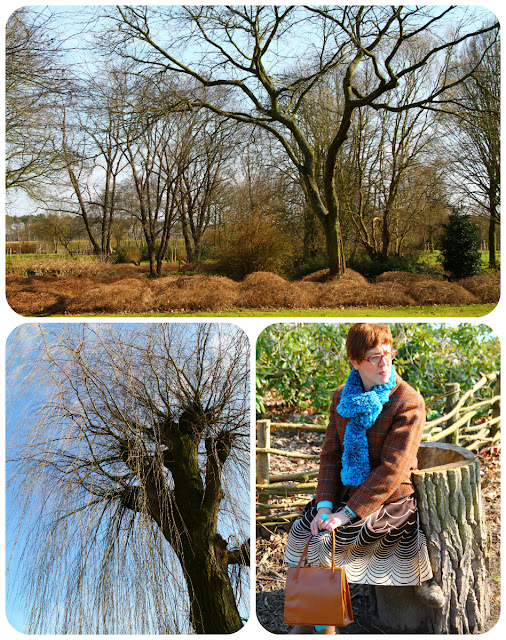 Pruned and trimmed, the park was looking a bit bare. It's hard to fathom that within a few short months it will all be green and lush again.

I gingerly sat down in the tree trunk seat, as its back was cushioned by fungi. 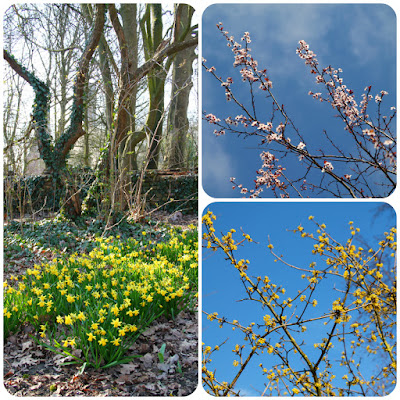 Blossoms in delicious pinks and yellows were out to herald Springtime.  And look: a host of golden daffodils! 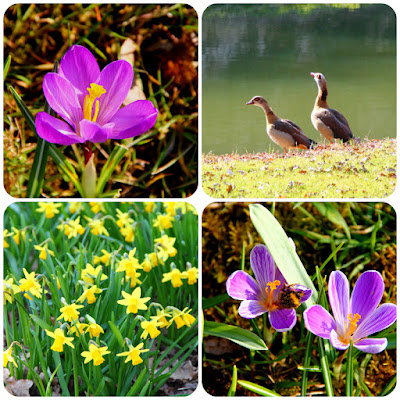 A few late crocuses were attracting the first of the bumble bees, who were deliriously buzzing among the flowers.

The pair of  Egyptian geese on the top right were honking for joy when some of their friends passed by overhead. 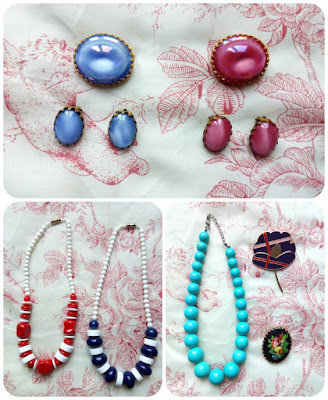 Conveniently, the park is close to one of our favourite charity shops, so it would have been downright silly not to go and have a look.

I was rewarded with all kinds of jewellery. The brooch and earring sets were remnants from the Retro Day, and were reduced by 50%, so I basically had two for the price of one! 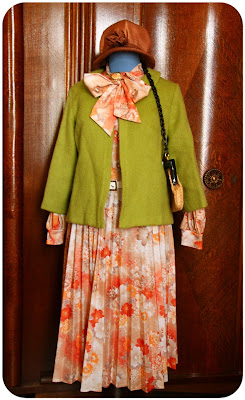 Back at home, I took pity on Angelica and dressed her in a Spring appropriate outfit. 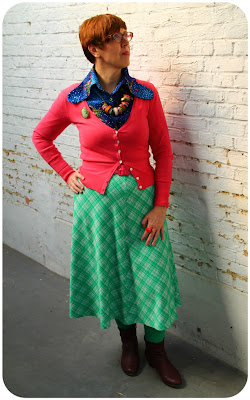 The hour we lost during the night to mark Summer Time was making me feel even more out of sorts on Sunday.

Drastic measures were required so I piled on lots of colour. The starting point for my outfit was the electric blue blouse, with its starburst and flower print. It's got a huge (and I mean huge!) spoon collar reaching over my shoulders.

After trying several skirts, I settled for this fresh green plaid midi length one. 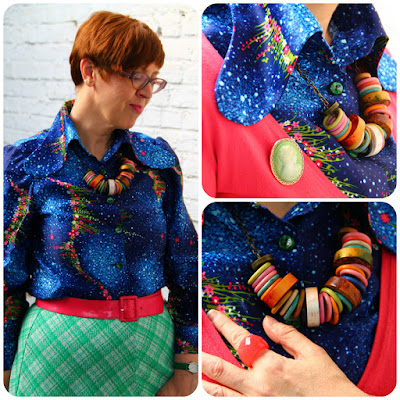 Echoing the pink flowers in my blouse, I then added a sizzling pink belt, cardigan and ring.

It wasn't easy to find the right necklace as the blouse kept clamouring for attention, but then I remembered this colourful necklace made up of wooden discs. It predates my vintage and second hand years and came from Accessorize, back in the day when they still had a shop in Antwerp. 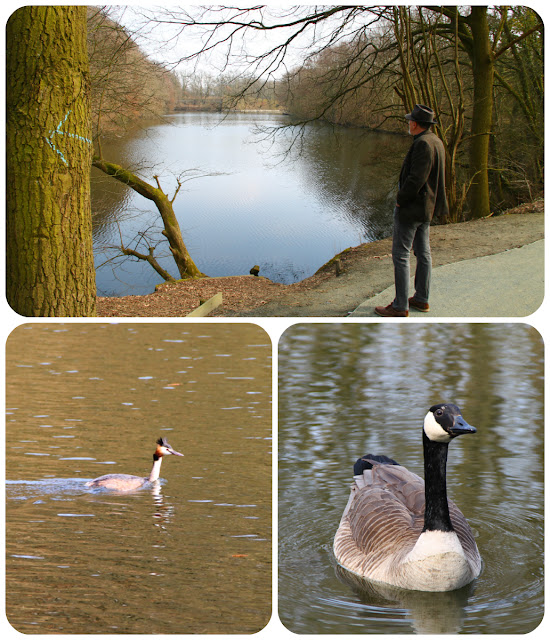 The day was too good to waste inside the house so, after we spent the morning booking a weekend away at the end of April, we were dying for a breath of fresh air and some healing rays of sunshine. 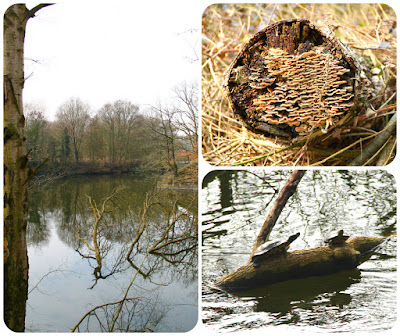 The nature reserve at the site of the old fort in the next village fit the bill perfectly.

The resident tortoises are slowly coming out of hibernation and some of them were basking in the sunshine. 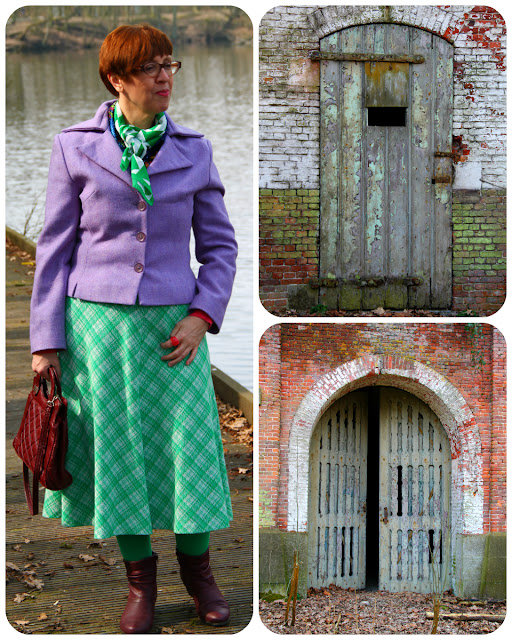 My lilac jacket added yet another colour to my early Spring outfit and this time I made the wise decision to leave behind the woolly scarves and wear a lightweight one instead. 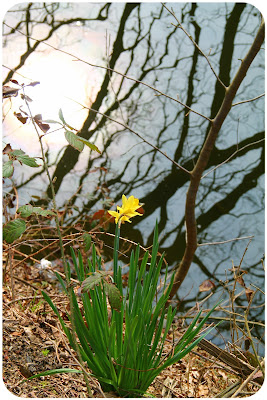 I was quite disappointed to spot only one small clump of daffodils, its twin flowers looking rather dolefully at their own reflection in the water.

It seems Spring still has a lot of catching up to do!
Posted by Polyester Princess at 19:43