I'm glad to report that the cold snap we've been having has come and gone and that we have clearly been spared the worst of it here in Belgium, with hardly any snow to speak of.  So, I'm putting it down to experience, giving me the chance to wear my warmest jumpers and my fur coat, as I'd already resigned myself to the fact that the latter would go unworn this Winter.

There was no time - and besides it was far too cold to stand still for long enough - for outfit photos, so you will have to make do with the winter fashions some of my vintage girls were wearing. 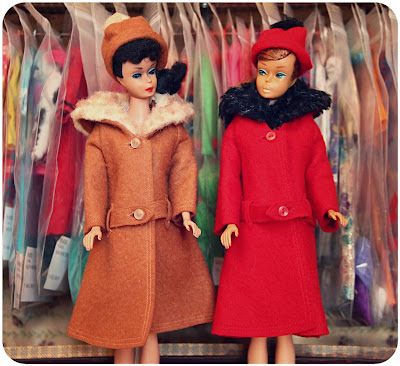 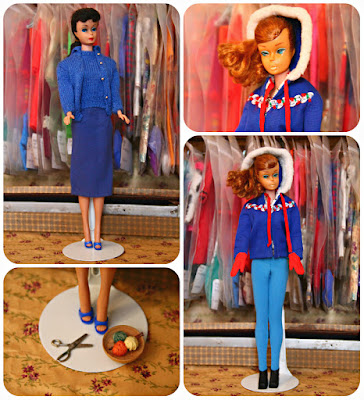 The same dolls are now wearing "Knitting Pretty" (1963), consisting of a royal blue skirt and twin set, which came with a bowl of wool and knitting needles as well as the smallest pair of scissors ever, and "Ski Queen", also dating from 1963. From this set, I am missing the skis and ski poles. 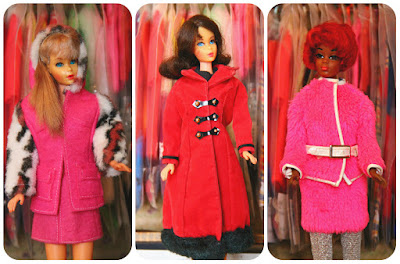 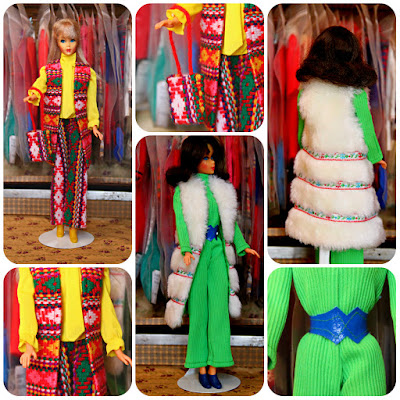 More 1970s grooviness in these two outfits. On the left, a yellow blouse with scarf tie compliments a pair of wildly patterned knit trousers and a long vest. It even has a matching bag! On the right, a bright green ribbed jumpsuit, with a royal blue belt, and a midi length white fur vest trimmed with three rows of floral braid. 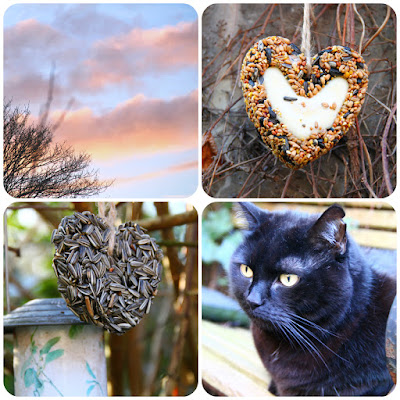 The first few days of the "big freeze", it was all fine and dandy, with me proclaiming loudly to all and sundry that really, I wasn't feeling the cold at all.

Then, on Wednesday of that fateful week, the sub-zero temperature was joined by an arctic wind, which made my eyes sting and my sight blurry, while my nose felt like it had been stuck in an ice bucket, triggering a bad headache. In short, I was feeling quite sorry for myself. 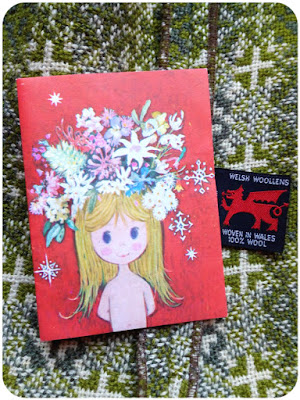 Then Jos called me at work, saying that a parcel had arrived for me from the UK. As there was no way that I could wait until I got home, I asked him to open it. It turned out to be from Vix, and it was the most fabulous Welsh wool jacket ever.

Naturally, Saturday's outfit had to feature it. 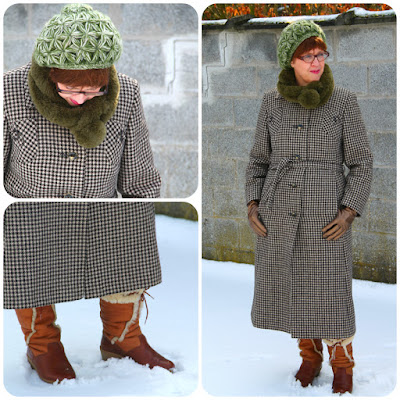 It had started snowing on Friday afternoon but by the time we left the house on Saturday, thaw had set in, so that most of the white stuff had gone.

Nevertheless, in order to prove that we did actually have some snow, outfits photos were taken in the one spot in our garage's courtyard where it hadn't melted yet! 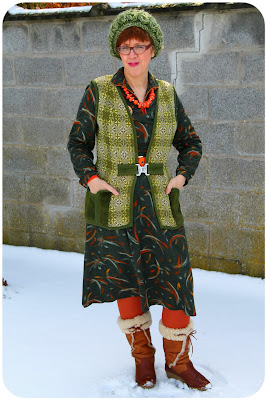 You have seen it all before: my houndstooth coat, green woolly hat, furry wrap and snow boots.

What you haven't seen yet, of course, is Vix's gorgeous Welsh wool jacket. It is sleeveless and closes with a suede belt with metal clasp at the waist.

It has pockets too, in the same suede as the belt, and the best thing is that it's in my favourite shade of my favourite colour: moss green! 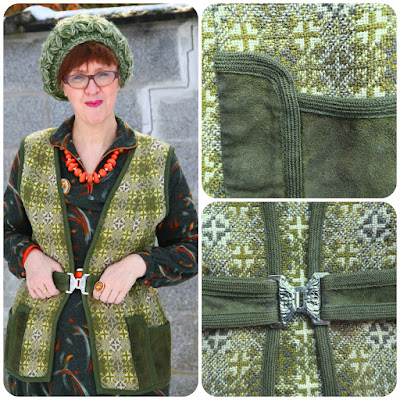 Underneath, I am wearing a dark green dress made from a Trevira blend of 90% polyester with 10% wool, patterned with swirls in orange and greyish green.

For my accessories, I took the lead from the orange in the dress by adding an orange belt and chunky necklace. 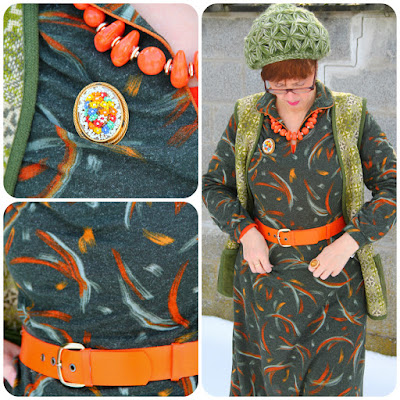 The brooch, which also features bits of orange, was a flea market find and Beate has told me that it might be Bohemian.

We were off to the charity shops, not expecting to find much, as the Retro Day was coming up (it has come and gone by the time you read this). 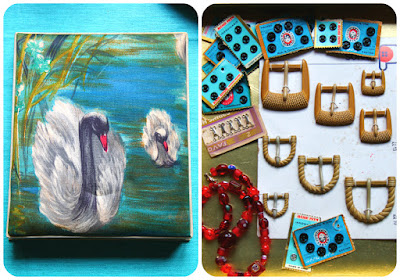 I couldn't resist the shallow box on the left. The box itself is made from stiff carton, with gorgeous black-necked swans on its padded fabric lid. There is no clue of what it might have originally contained. Chocolates or biscuits, perhaps? Or maybe it was a set of napkins or pillow cases?

From another shop, I picked up a small bag of sewing odds and ends, featuring hooks and eyes and press studs in all sizes, as well as a card of plastic belt buckles. Both were € 0,50. There was also another necklace for my collection, which I think was € 1. 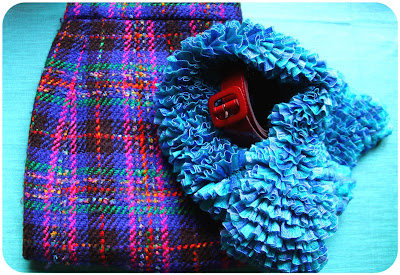 Other finds include a  gorgeous 100% wool plaid skirt, a turquoise frilly scarf and a burgundy vinyl belt. 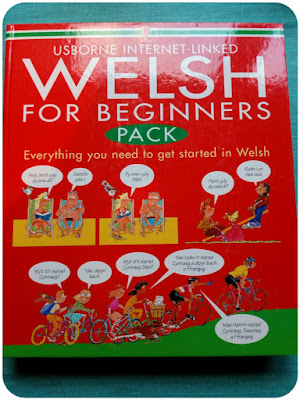 While Jos was browsing the crates of vinyl, I spotted this Welsh language course standing proudly on top of one of the bookshelves.  Now we've really got no excuse not to learn a bit more than things like "bore da" and "diolch". I already started a similar course a couple of years ago, but had to give it up due to lack of time.

It may come as a surprise that we won't actually be going to Wales this Summer, but we will be near enough to nip over the border once or twice, so that we can practice the Welsh phrases we hopefully will have mastered by then! 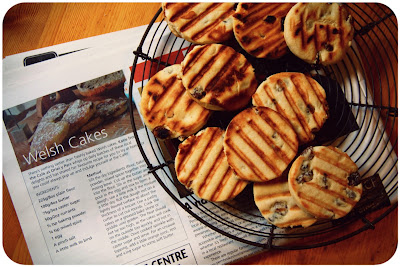 Now I am seriously craving some Welshcakes, so it's about time that we whip up a batch very soon.

Meanwhile, I'm taking my Welsh jacket over to Patti's Visible Monday at Not Dead Yet Style!


Posted by Polyester Princess at 19:35