Once upon a time, there was a princess, who ended up living in the smallest of cottages by mistake.

She was mad about vintage clothes and all manner of lovely things, but the cottage was really tiny, and soon it was at risk of bursting at the seams.

At night, she tossed and turned and often woke up in a sweat. Arguably, this could have been just a symptom of the menopause but, either way, she often lay staring blindly at the ceiling with its twinkling second hand chandelier.

What was she to do? Time and time again, she vowed never to go near the charity shops again. Nor Think Twice! She was quite determined: her decision was made! 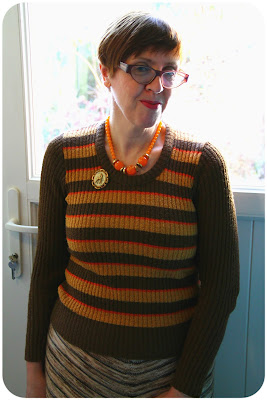 But then the weekend arrived and it was as if she was being pulled by a huge magnet, so she had no choice but to put on her shoes and her coat and drag her poor, long-suffering husband along for another hunting spree.

The fearsome devils of second hand shopping clearly had her in their might! 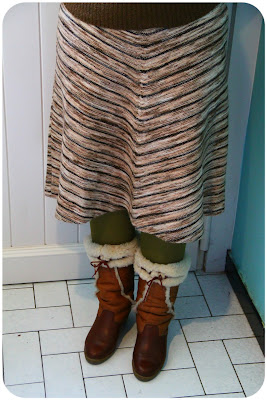 One day - it was bitterly cold, and she had to dig out her € 4 vintage snow boots from Think Twice -  a thought hit her.

If she really was a princess, then what was she doing living in this tiny cottage? Weren't princesses supposed to be living in castles?

Surely, there must be an abandoned castle she could move into! 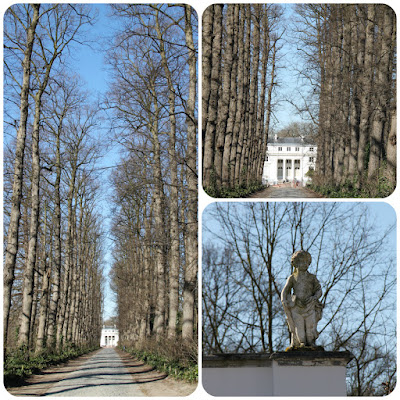 She and the long-suffering husband took the car and went for a ride.

Soon after they left their village, they stumbled upon a long avenue of tall, centuries old linden trees. In the distance, a shimmering white building seemed to be beckoning them. 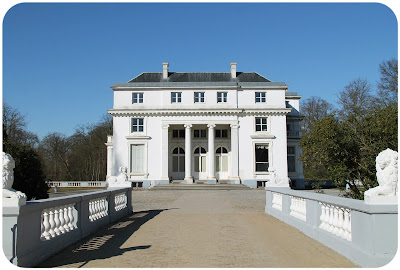 They started walking the cobblestone path in its direction and emerged from the tunnel of trees onto a courtyard flanked by two freshly painted white coach houses which, judging from the scaffolding, were currently being renovated.

Ahead, beyond a grey and white railinged bridge guarded by dazzling white lions and sphinxes, was a three-storeyed mansion fit for a princess. 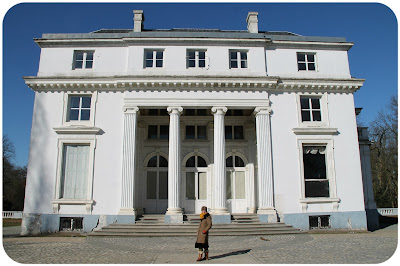 As she walked into the direction of the stone steps and the four columned portico leading to the entrance, she couldn't help thinking of a lavishly iced cake, its finger-licking layer of white fondant brilliant against the deep blue of the sky. 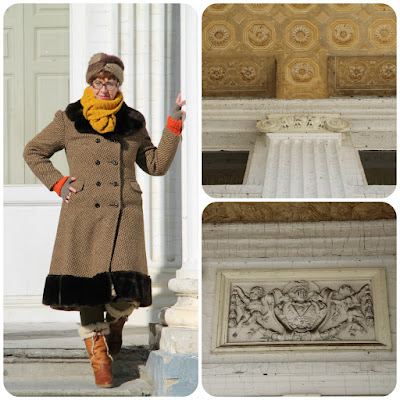 Close up, she could see that the hand of time had left cracked paintwork and crumbling, pockmarked plaster. 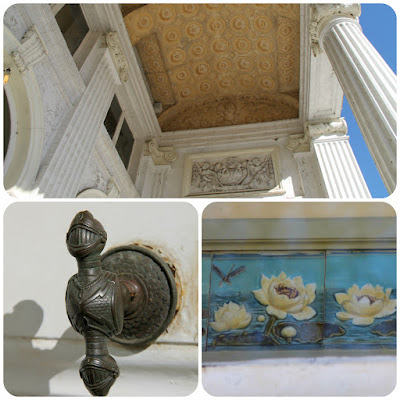 But these flaws only enhanced its enchanting details: the portico's elaborately stuccoed ochre ceiling, the bas-relief panels and the scroll topped columns.

There were the most delightful ornamental door knobs shaped like topsy-turvy helmeted knights, while through a gap in the shutters, an exquisitely tiled border featuring water lilies and dragonflies could be glimpsed. 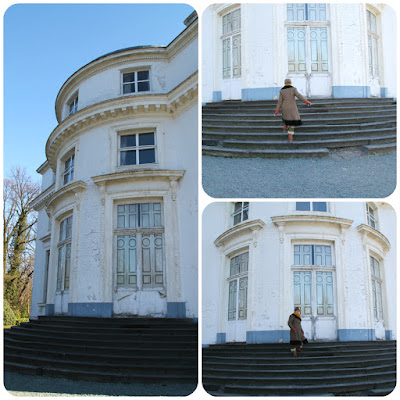 But the doors were firmly locked, and so were those at the back where a crumbling circular set of stairs led up to shuttered French doors slowly rotting away in their frames. 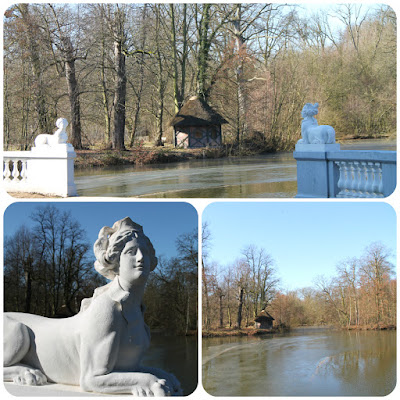 From the gravelled terrace, a glorious view towards the lake opened up. A gap in the railing, watched over by a pair of haughty sphinxes, revealed a set of steps leading down to the water.

It wasn't hard to imagine a crinolined lady being rowed from here to the thatched summer house nestling under the trees, for a spot of quiet reading, perhaps. 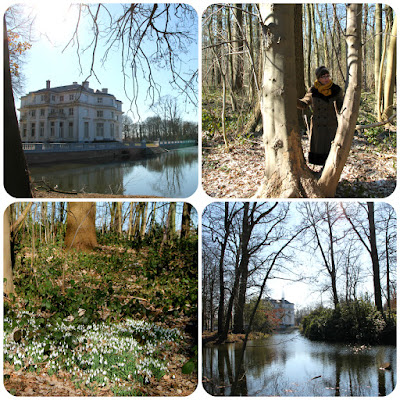 At this point, it was clear that the princess had to abandon her plans of moving in and transforming one of the salons into a huge walk-in wardrobe.

In order to get the lay of the land, she and the husband decided to negotiate the path of frozen mud around the lake where, through the winter bare trees, the castle kept begging for mercy.

Then, a sudden carpet of snowdrops heralded the coming of Spring. 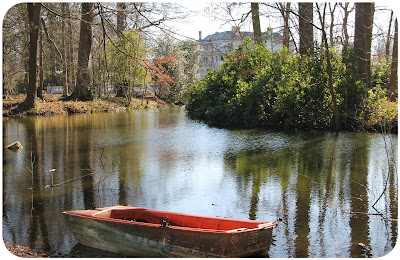 An abandoned boat, its tacky orange plastic decorated with mosses and graffiti, provided a focal point when the bulk of the castle temporarily disappeared from view. 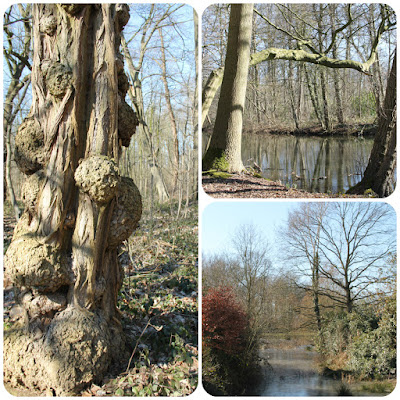 Some of the trees were dead or dying, waiting to tumble and crumble to dust. 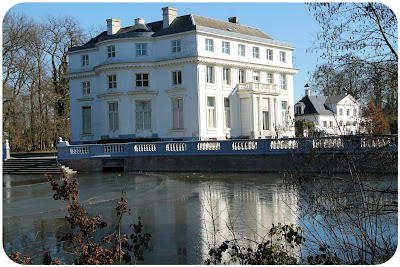 The lake's circuit completed, the castle came into full view again, with the steps leading out to the lake on the left, and one of the courtyard's coach houses on the right. 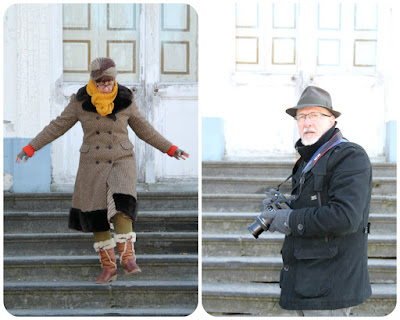 With heavy hearts, the princess and her husband turned their backs on the castle, and returned to the tiny cottage, where the princess continued to daydream (and lie awake at night!), while cramming her newly found treasures into her already full to bursting wardrobe.

The princess was wearing:

Posted by Polyester Princess at 19:08