Wandering in the wilderness

It was January's final Sunday and alas another granite grey day, which was issuing absolutely no invitation to leave Dove Cottage's cozy confines.

But it was dry, and with the temperature an almost Springlike 13° Celsius, we made the most of what was on offer and went for a short walk to clear away the cobwebs. 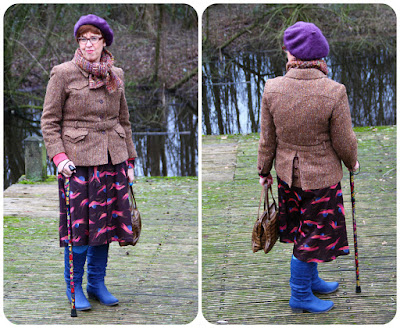 You've seen all my outerwear before: comfortable yet stylish Tweed jacket, purple mohair beret and old multicoloured wool scarf. The blue boots, being a kind of waxed leather, might not have been the best choice for what we had in mind, though.

Note the walking stick, which signifies we were about to tackle rough terrain! 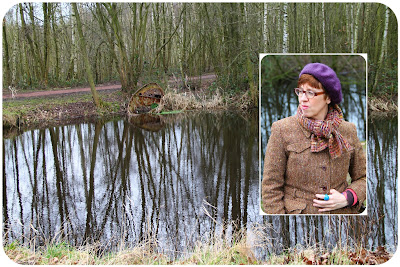 We drove down to De Schorre, a recreational domain and nature reserve on the site of a former clay pit, quiet but for a couple of families out for a walk and, at one point, a gaggle of chattering rainproof clad ramblers.

Several times a year, the quietness is shattered by events taking place elsewhere on the domain and for two weekends in Summer, it is the scene of Tomorrowland, the largest Dance Music festival in the world: its deep thumping basses can be heard and felt at Dove Cottage, more than eight kilometers away. 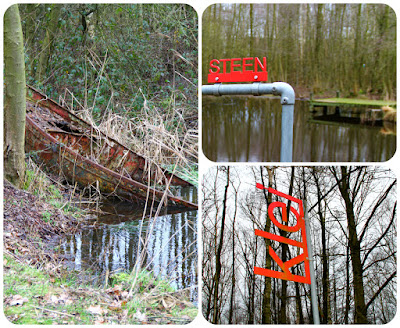 We parked our car in one of the streets backing onto the nature reserve, entering through a small municipal garden, a pond with some benches and a jetty at one end. A half submerged rowing boat, its timbers battered and rotten, was tucked away in a corner under some trees.

A red metal sign shouted the word STEEN (stone), a reference to the area's brick-making past. It is part of a fragmented art installation, parts of which can be found all over the domain, poignantly telling the history of the brick industry which used to thrive here. Another clue can be found just a couple of meters further along, in the word KLEI, meaning clay. 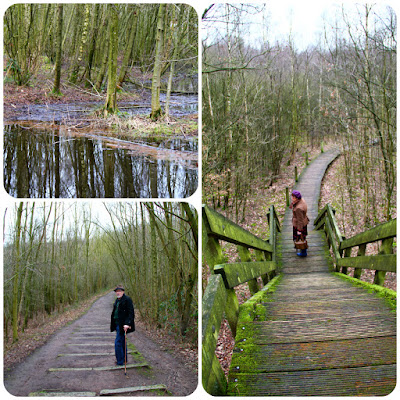 Traces of the once-flourishing brick industry are still visible in the landscape laid out on the banks of the river Rupel, which is scarred by centuries of clay-digging and dredging. 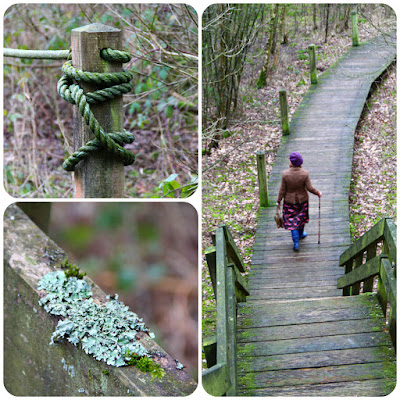 Some of the old clay pits are now beautiful nature reserves, where nature has once again reclaimed what is hers, the now water filled quarries havens for dragonflies and damselflies, frogs and other amphibians, as well as several species of waterfowl. 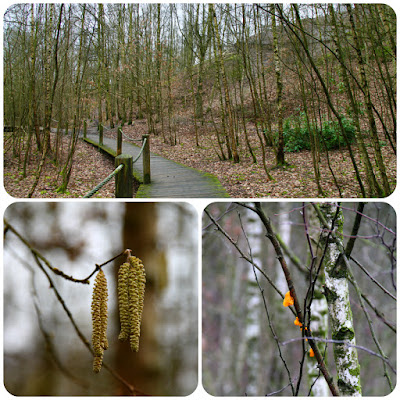 Here at De Schorre, sets of wooden steps take you from street level about 25 meters down to the bottom of the former pit, where a network of boardwalks leads you through the wetlands created by months of rain.

At one point, a stream of mud had avalanched onto the boards. Without any means of escape, there was nothing for it but to risk ruining my boots. Remember that this is no ordinary mud, but heavy clay which sticks and tries to root you to the spot. 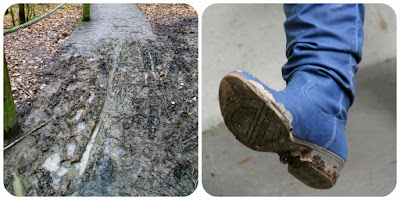 The red metal panel here reminds you of the fact that during the industry's heyday at the end of the 19th and beginning of the 20th centuries, there were more than 150 factories in the area, making the industry the biggest in the world. Now, only one factory remains active. 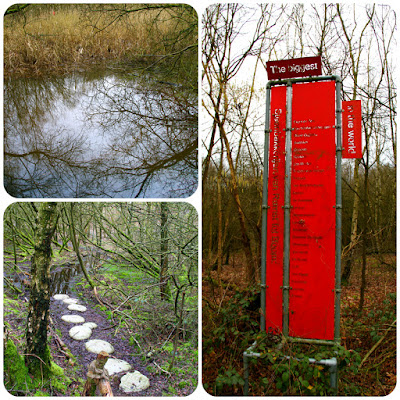 The stepping stones on the bottom left mark the start of a so-called "barefoot path" leading into the depths of the wilderness. Where the stepping stones end the path has turned into a stream, so I guess a pair of sturdy wellies would be the appropriate footwear here! 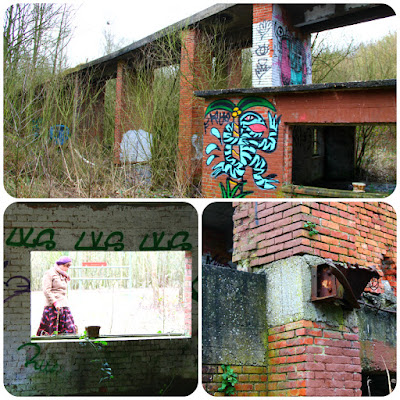 Soon after the boardwalk path ends, you are faced with a ghost of the past in the form of a ruined and graffitied brick building and elevated tracks on tall brick pillars. 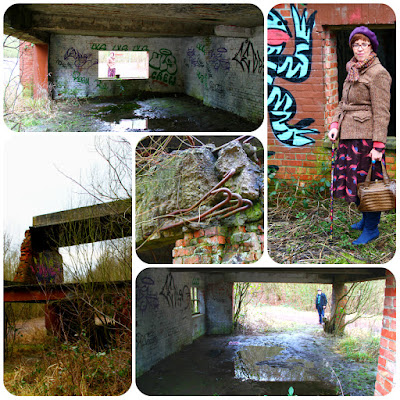 This is a landscape full of stories. The stories of the men, women and children, who once worked here in appaling conditions, performing extremely heavy, monotonous labour, for twelve hours a day, earning a pittance. 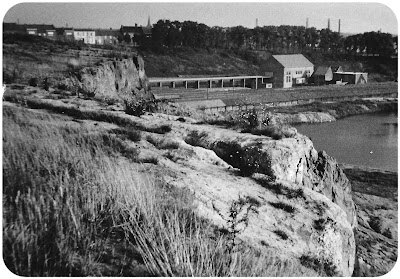 It was Jos, who was born and bred in the area, who took this photograph in the early 1980s, showing the factory still in working order.

Close your eyes and imagine dozens of waggons being drawn up the elevated track towards the engine room, carrying the heavy clay from the pits. 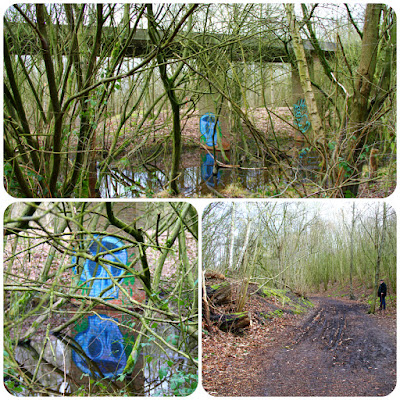 Taking the path around the back of the construction, we walked between trees and along some muddy stretches until another piece of industrial archeology came into view. 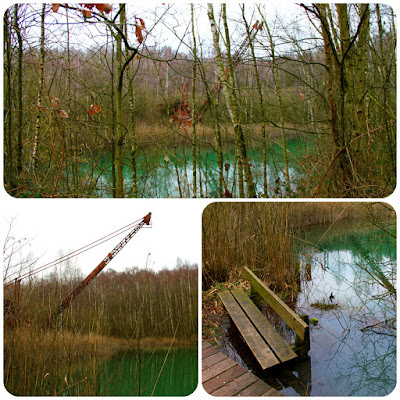 This rusty red dredger is hanging on for dear life to the reed clad edges of a water filled clay pit, contrasting deeply with the unearthly green of the water. This is a secondary clay pit, excavated by the greedy dredger, and another 25 meters deep.

Flooding means that you won't be able to keep your feet dry while sitting on that bench.

From here, a steady but gentle climb brought us back to our starting point and our car. 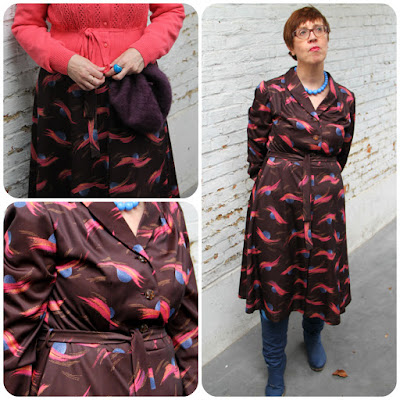 Back home, it was time to show you what I was wearing underneath my jacket. You have already caught a glimpse of my frock, which is a 1980s does 1940s number. At least that is what I think it is. The fabric, featuring a blue, pink and orange print on a chocolate brown background, is satisfyingly swishy, aided by its equally swishy lining.

I accessorized with a blue ring and blue beads. I was also wearing tights in the same blue, which you can just about see in the opening photos of this post. 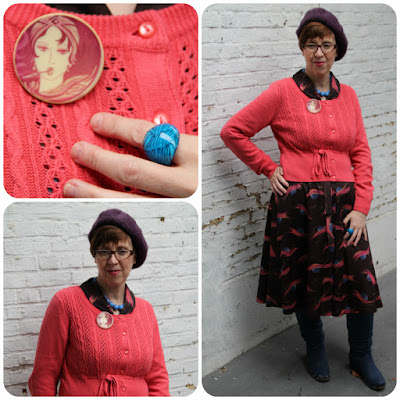 The pink in my frock's print lead me to choose a pink cropped cardigan with a drawstring at the waist. I must admit I had forgotten all about it and found it shoved at the back of my wardrobe while looking for something else entirely. The large brooch featuring the 1920s flapper girl seemed like the perfect companion.

I'm taking my outfit to Patti's Visible Monday at Not Dead Yet Style. Do have a look at what all the other visible girls are wearing!