Disenchanted with Think Twice's offerings in the last couple of months, I hadn't made any purchases in any of their three Antwerp shops. Plus, I'd missed their previous sales days, which usually yield a few treasures, as they took place end of last year, just when I was enjoying my Christmas break. 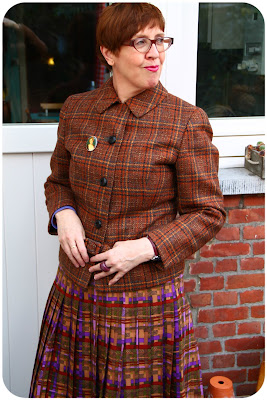 In spite of having paid regular visits to the shops since returning to work in January, nothing really took my fancy, their stock being predominantly 1980s and later.

Scanning the rails, my eyes usually pick out any items worth exploring from a distance. Once in while, my heart started beating faster when I clocked a fabulous 1960s or 1970s print, only to be disappointed when said item turned out not to be even remotely my size. 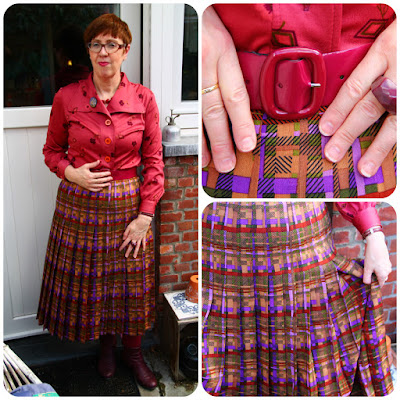 So, when their sales email dropped into my inbox a couple of weeks ago, I patiently waited until prices were down to € 5, giving the shops a wide berth on the -30% and -50% days.

I'm happy to say that my patience has paid off, as I was able to buy both the delightful checked jacket and the colourful pleated skirt I'm wearing here for € 5 each! That's what I call a bargain! 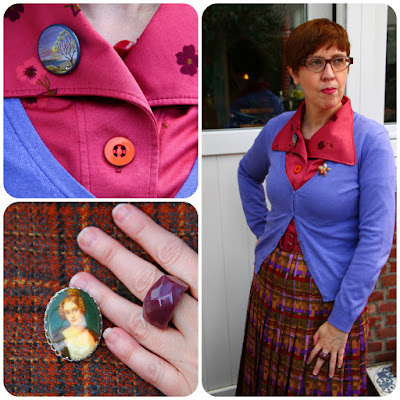 The skirt is lined, and as it doesn't have a label, I presume it was handmade. With so many colours represented in the print, there's a wide range of tops for me to choose from.

I hadn't worn this vintage blouse for a while, so it was high time it got an outing. I bought it at the sadly missed Blender Vintage Shop several years ago. I love its colour and print, as well as the rather unusual wide wing collar.  The burgundy beaded necklace, which you can just catch a glimpse of, came from the same shop. 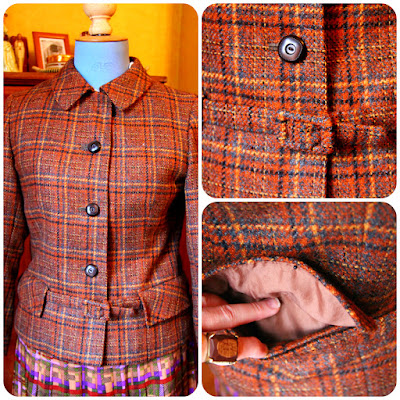 Here's a closer look at the jacket. It's belted quite low on the hips and the belt loops are hidden under the pocket flaps. You'd expect these to be just flaps, but no: much to my delight they are actual pockets!

The great thing about Think Twice is that while the sales are in full swing, new items keep being added, right until the € 3 mark.

Someone explained to me once that the bags of clothing they receive at this point are considered second rate, but that's fine by me, as it's then that the most exciting pieces turn up. Who wants old tat from the 1960s and 1970s, eh? Well, me, obviously! 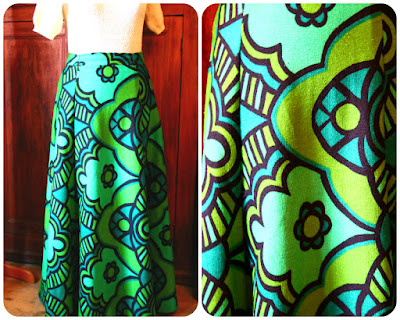 Here's the lovely Angelica modelling all the other things I grabbed for the bargainous price of € 4 and € 5.

I guess I don't have to tell you that the full maxi skirt with its fabulous print is Skandinavian. It is lined and quite heavy. Quite an eye-catcher, don't you agree? 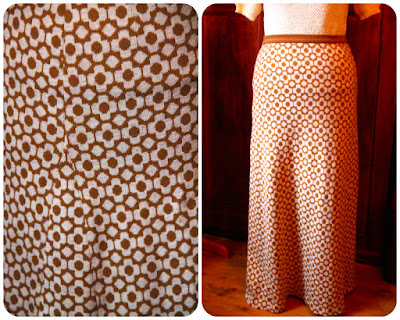 Another maxi skirt, straight this time, and knitted in a cream and brown pattern.

The photos really don't do it justice. I'll have to do some outfit photos wearing it, so that you can have a better look. 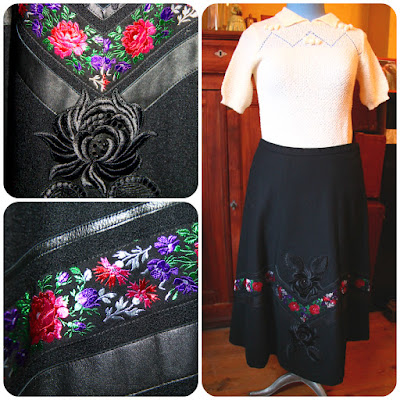 This heavy wool skirt was Made in Germany and made me think of Beate.

This was even harder to photograph, especially as it was quite a dark day.

Strips of leather and folksy embroidered flowers are sewn in a chevron pattern near the hem and there are two elaborate fabric flowers with black sequinned hearts on the front.

I think it would go rather well with my red traditional German cardigan! 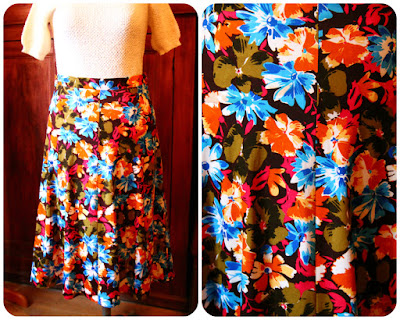 More flowers in this vibrantly coloured summery skirt. I can see quite a few possible companions among my Summer tops! 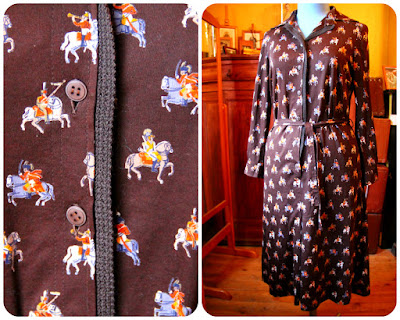 Quite an unusual print for this 100% cotton lined dress, again made in Germany! I loved its chocolate brown-ness, the vibrant colours of the horsemen and the braided ribbon edge.

What I didn't like were the boring little buttons, which have been replaced by these in the meantime: 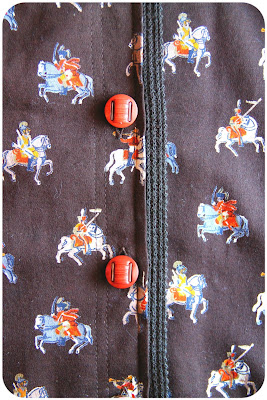 € 4 surely was quite a steal for this gorgeous long-sleeved maxi, with its funky blue and white print, with the odd bit of yellow thrown in, and its solid blue wing collar. 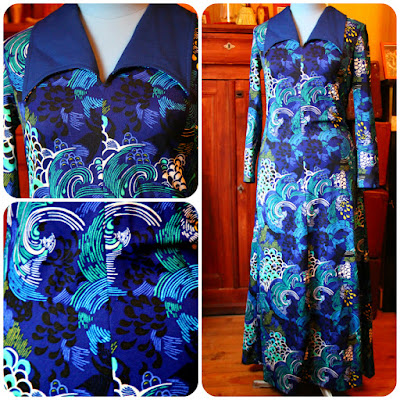 On my way to the till, my arms full of stuff, I passed a rail of coats, when out of the corner of my eye, I spotted a flash of chartreuse and blue plaid. Bingo! This gem of a coat just screamed Swinging Sixties, Carnaby Street and yes, Twiggy! 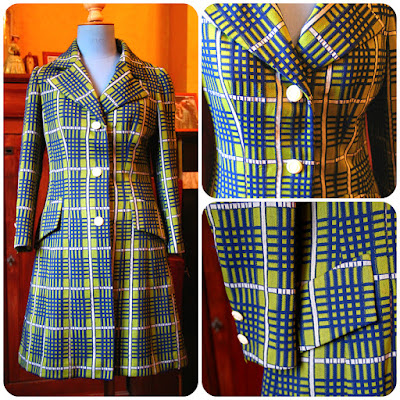 I didn't feel like queuing at the fitting rooms again (there are only two, and the queue as you can probably imagine very long) so I took a chance on it. Luckily, it fits, if only just. But hey, it's a Summer coat, and I'll probably wear it unbuttoned a lot of the time. 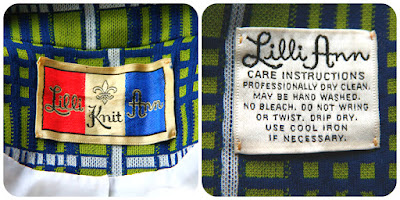 If I hadn't already been won over by its 1960s mod print and model, the label would have done so!

Here's what the Vintage Fashion Guild has to say:

"Lilli Ann was started in San Francisco in 1933 by Adolph Schuman, naming his company for his wife, Lillian. The company became known for their beautiful, elaborately designed suits and coats.

After WWII, Schuman went to France and it was during this time that the labels had “Paris” added to them.

In the 1960s, there was a popular Lilli Ann Knits line, and a mod-inspired London line." 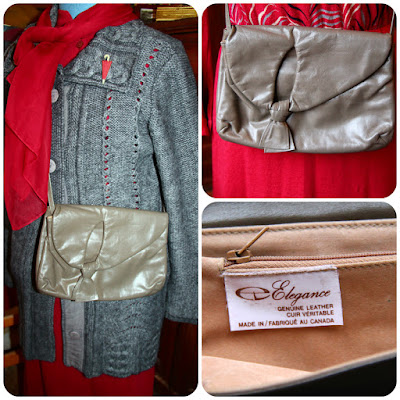 My last find was this grey shoulder bag, made from the softest of leathers, and decorated with what looks like a small tie. And look: not made in China, but in Canada! What do you think of that, Sheila and Suzanne?

Doesn't Angelica look elegant in her burgundy and grey outfit? I like to play dress up with her, and this is what she is currently wearing!

Do you have a dressmaker's dummy, and do you dress her up as well?

Linking to Patti's Visible Monday at Not Dead Yet Style as usual.
Posted by Polyester Princess at 19:18