Stories from the city

The sun was still refusing to come out and play for most of last week, but mercifully the rain held off and we enjoyed a couple of dry days.

On one of these days, I was sitting at my desk, wistfully looking out of the window and wishing I could go for a walk.

And why not, I thought. Damn, that's exactly what I was going to do. I couldn't wait for lunchtime to arrive.

I started walking into the direction of the river Scheldt, which is less than a ten minute walk from my office.

If walked briskly, that is, but first I passed the cathedral's main entrance, where I mingled with the hordes of tourists photographing its magnificent façade. 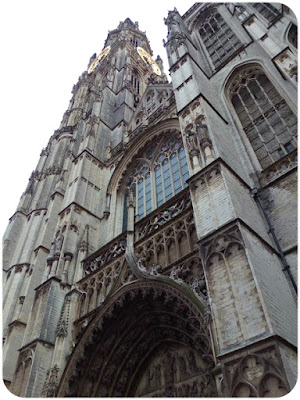 Catching a glimpse of the Grote Markt to my right, I made a little detour to catch this classic view.

The Grote Markt, Antwerp's market square, is lined with many lavishly decorated Guild houses. Don't be deceived, though, as they are not as old as they look. The original houses being destroyed by fire in 1576, they were rebuilt in Flemish Renaissance style, but revamped again in the 19th century. Note the beautiful golden statues on top of the houses, catching the rays of a hesitant sun. 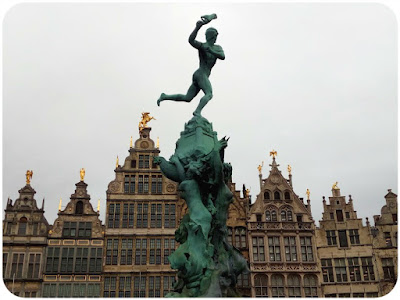 The bronze statue, which in the Summer months is turned into a fountain, dates from the 1880s.

The man on top is called Silvius Brabo, although like Morse, he usually goes by his surname only, and if you look closely, you can see that he is in the process of throwing away a severed hand.

Creepy, until you know the full story behind it. According to legend, Brabo rid the city of the evil giant Antigoon, who demanded tolls from people wanting to cross the river and cut off the hands of those who refused to pay. After slaying the giant, Brabo gave him a taste of his own medicine by severing his hand and throwing it into the river Scheldt.

According to popular belief the city's name - Antwerpen - is derived from the act of Brabo throwing the hand, which is "handwerpen" in Flemish.

The hand also became a symbol of Antwerp, appearing on the city seal as early as the thirteenth century. 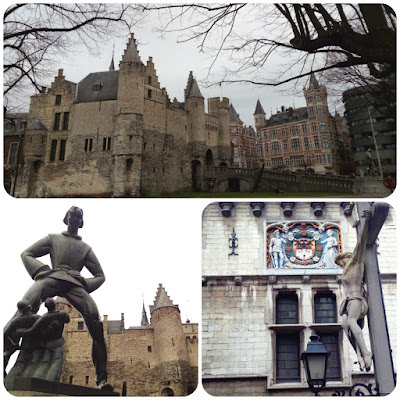 Having finally made it to the river, I turned right and was immediately faced by the oldest building in Antwerp, a 800-year old castle known as Het Steen (literally meaning "the stone"), which is standing rather desolately at the quayside. It was named Het Steen as it was the first large building constructed in stone.

What remains today is only a fraction of the once mighty castle. The building was once the center of the city's oldest neighborhood with narrow streets, gates, towers and a fish market.

The castle was altered several times during its history, and it is actually quite easy to see which part of the castle is still original, as the 13th century masonry is much darker than the later additions. In the 19th century, the city decided to widen the river and construct new quay walls to accommodate the growing harbour traffic and to prevent the river from silting up. For this, the historic streets around the castle - more than five hundred buildings! - were demolished. Het Steen survived, though only barely: the city council voted in favour by just a single vote. 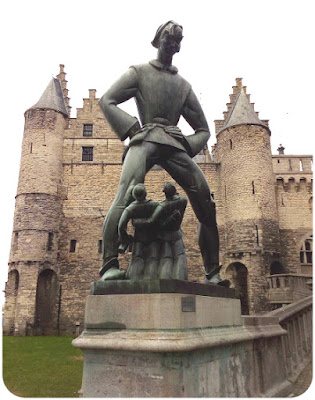 Near the entrance of the castle stands one of Antwerp's most famous statues. Dating from 1963, it depicts the legendary figure of Lange Wapper who, according to Antwerp folklore, could grow to the size of a giant and terrorized the city in the 16th century.

I walked up the incline to the castle's entrance, and emerged at the other side, climbing up the stairs leading to the elevated promenade along the river Scheldt, which is actually built on top of a row of old warehouses, now mainly used for parking. You can see their corrugated roofs behind the railings on the right. 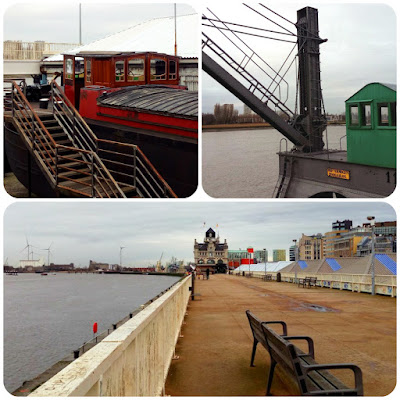 The broad, windswept quayside promenade is a favourite place for Sunday strolls, but on this grey and breezy Winter weekday, I practically had the place to myself.

In the distance, the port opens up, with dockside cranes, windmills and modern high-rise buildings vying for attention with the late 19th century Pilotage Service Building (locally called "Het Loodswezen") in a prominent position mid-picture. The swooping seagull entered my view just as I was about to push the shutter, or whatever you call the equivalent when taking photos on a smartphone. 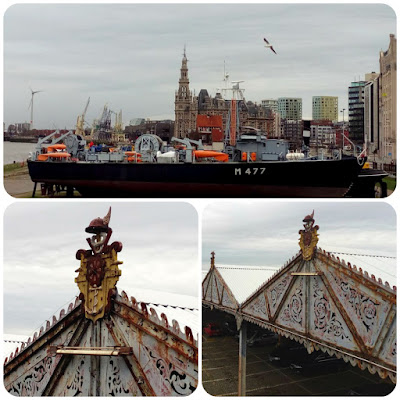 Descending to street level, the row of  gabled warehouses with their decorative metal pediments can be fully appreciated. Their rusty appearance only adds to their charm. The ornaments on top include typical maritime attributes like anchors and ship's helms.

With an eye on the clock, I made my way back to the office, almost getting lost in the muddle of small streets and alleys, watched over by some of Antwerp's delightful street corner Madonnas. 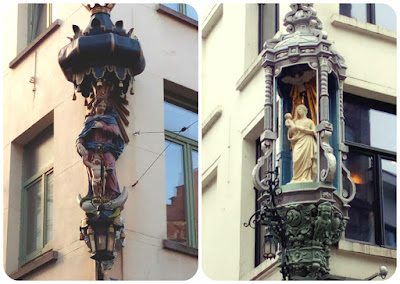 Speaking of which, we found this charming plaster holy family statue while out charity shopping on Saturday. 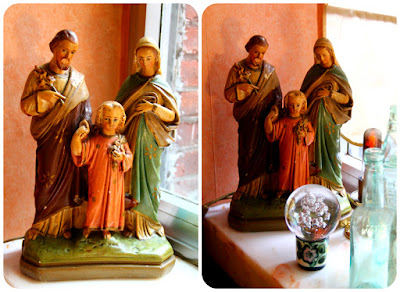 But before I show you my other finds, let me take you through what I was wearing for our shopping trip.

Although it has been in my wardrobe for years, I don't think this plaid Diolen dress ever made it on the blog. It is lined, although the lining is in very bad shape, has a pointy collar and shiny square black buttons framed in white metal. I love its turned-up cuffs, closing with two buttons.

In order to give it even more oomph, I added red accessories: belt, necklace and plastic bird brooch. Even my watch strap is red, but I chose a teal plastic ring. 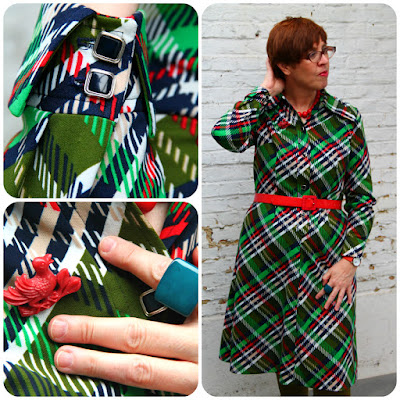 What to wear on top of a plaid dress? Well, more plaid, obviously. The cardigan, from King Louie, was charity shopped, and the über-cute green ceramic Bambi was picked up at a vintage market. Due to his fragile nature, I am treating him with the utmost care. 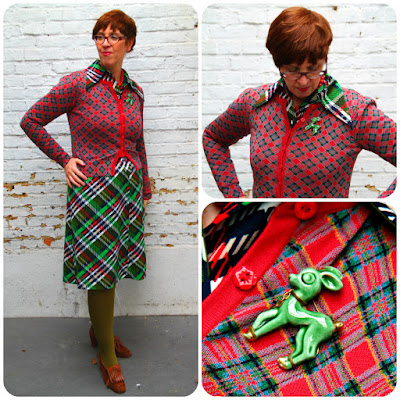 I added yet another layer of plaid by wearing this rather heavy vintage coat from Oxfam, which I've recently rediscovered. Further Winter warmth was provided by my mustard beret and crushed velvet scarf. It was quite chilly outside!

Boots would have been the obvious choice, but I felt like wearing these delectable vintage brogues, which are Italian made for Bouvy, a posh Brussels shop. They were charity shopped, obviously, together with a vintage coat which came from the same shop, back in October. 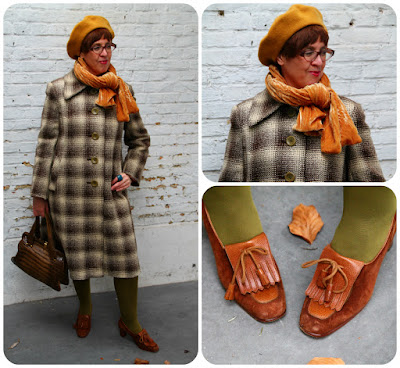 In the run-up to the Retro Day, which will take place in March, there's a hardly a chance to buy vintage, so pickings in that direction are meagre to non existent. 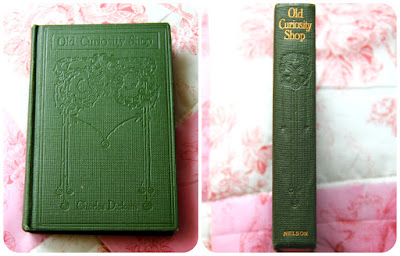 Look at this gorgeous edition of Dickens's The Old Curiosity Shop, though! It's a pity it isn't dated but, whatever its age, it is surely worth the € 0,75 I paid for it. 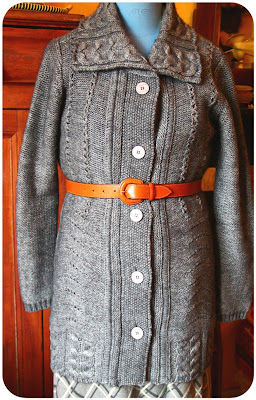 I've been quite lucky with new-to-me items lately, and this grey cable knit cardigan was no exception. The leather belt was another recent find. 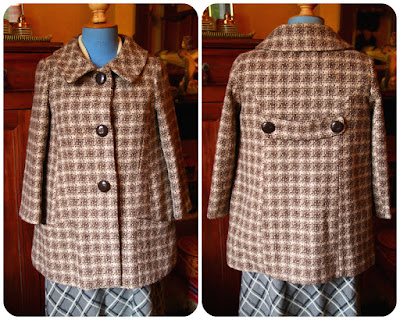 Finally, my eye was caught by this short swing coat from Spanish brand Sfera. Yes, yet another coat!

It's time for another clear-out, before, like Suzanne's friend, I suffer a crisis at my next wardrobe switch! OK, I do admit I'm suffering from The Thrifter's Malady!