The icing on the cake

It's hard to believe that we are already more than half way through February. Time really does fly! Signs of Spring, however small, can already be spied, and the days are slowly but surely getting longer. In fact, last Monday morning was the first time in months I left the house in daylight, and for a week or two now darkness hasn't yet descended while I'm making my way home.

Even so, I have to set the Time Machine back a couple of weeks, to February's first weekend, as I hadn't finished telling you about it.

We hadn't been to any flea markets for a month and we were starting to get seriously itchy, so, that particular Sunday, we bit the bullet and went to the much scorned indoor flea market in Antwerp. You know, the one we vowed never to go near again. Which shows just how desperate we were ... 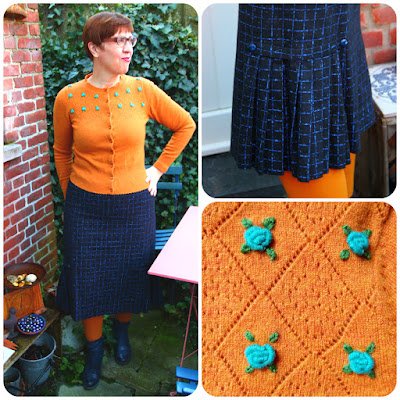 Before we left, we briefly stepped outside for outfit photos. It was chilly, even though I was wearing a - gasp! - jumper! It's a cardigan actually, but I'm always wearing it as a jumper. It isn't vintage either, nor is it new-to-me. It's King Louie and picked up from an outlet shop while on holiday in Belgium's west country back in 2013. I love its deep ochre yellow and, of course, the blue rosebuds and diamond pattern at the yoke! 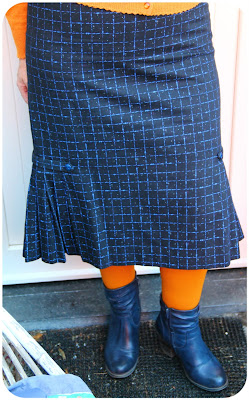 I came across this skirt in one of the charity shops we'd visited the day before. The fabric's a sturdy cotton, in very dark blue, almost black really, with a lighter blue plaid pattern, and tiny speckles in off-white and burgundy.

I never thought I'd see the day I'd be wearing a pencil skirt again, but the two rows of kick pleats left and right, gathered by buttoned tabs, make it quite comfortable to wear.

My opaques were the same colour as the cardigan, and I chose a pair of blue booties. 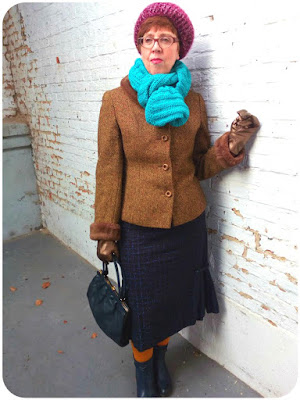 The skirt which came with this Tweed jacket hasn't been worn for a long time. Although I like how the suit looks when worn together, the Tweed fabric, even though it is lined, is rather scratchy, even when I'm wearing a thick pair of tights.

The jacket often sees the light of day, though. Here I added my warm woolly burgundy hat, one of my new scarves bought the day before and my gold leather gloves, which have already seen a lot of wear since I bought them in the January sales. 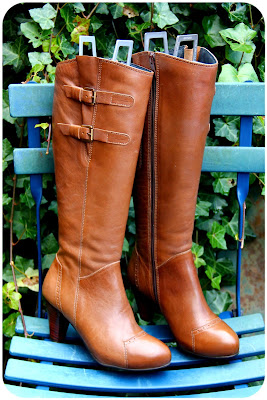 At first sight, the flea market didn't seem to be very promising with many gaps between stalls, but we soon came across a stall selling new leather boots for € 10 a pair. They even came in different calf widths, so when I tried on this gorgeous tan pair, I was glad to find I could zip them all the way up. 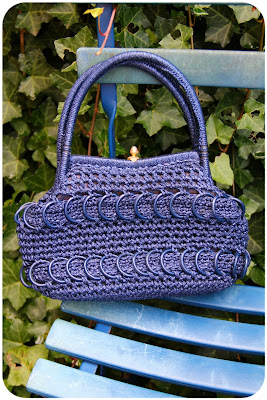 This blue woven handbag with two rows of plastic rings was hiding at the bottom of a box. It was mine for € 5. 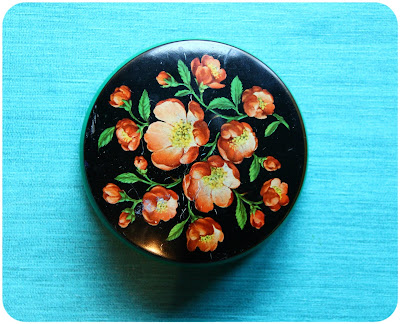 I couldn't resist this pretty little tin. Aren't those colours gorgeous? The bottom half is a solid green and marked "Victoria", a Belgian chocolate brand which stopped trading in the 1970s. 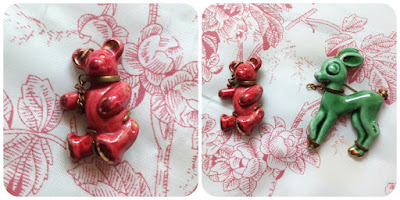 We stopped to talk to a lovely lady in her eighties, who's been buying and selling collectibles since she was a young girl.

Her stall has all manner of lovely things, but my eyes immediately zoomed in to the red bear brooch, recognizing it as being from the same range as my beloved 1950s Bambi brooch. 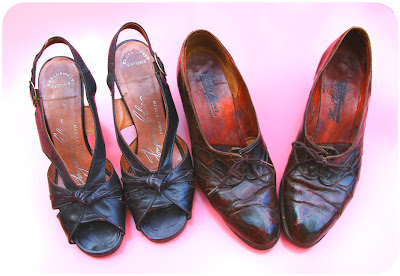 I also bought two pairs of vintage shoes from the same stall. The pair on the right bears the name of a long gone Antwerp shop. 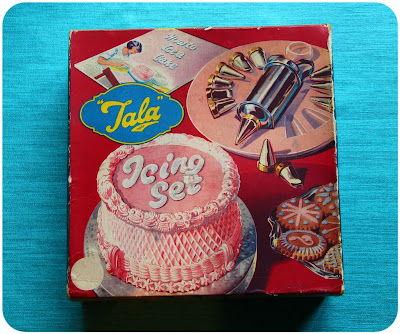 There were still quite a few aisles to trawl after lunch, but nothing really appealed to us, until we stumbled upon this boxed vintage Tala icing set.

We have collected a bit of kitchenalia over the years - most of which we actually use - and even though there one or two Tala items among them, this is the first time we happen upon vintage Tala in Belgium. 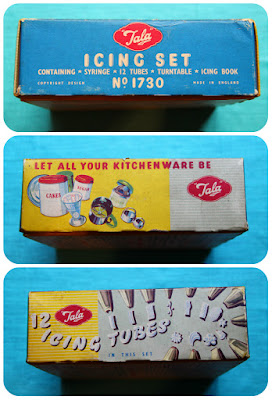 Tala is one of Britain's oldest baking and kitchenware brands. They were founded in 1899 in Stourbridge, which is in England's Black Country and not in Birmingham, as rightly pointed out by Vix, who's a Black Country girl herself!

This set, which used to belong the seller's Mum, dates from around 1950. 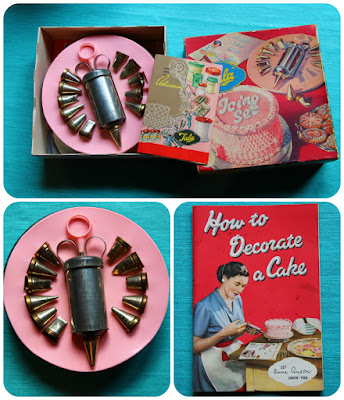 Not only does it contain a syringe and all of the twelve different icing tubes, there is a turntable as well, which admittedly is a bit wobbly. 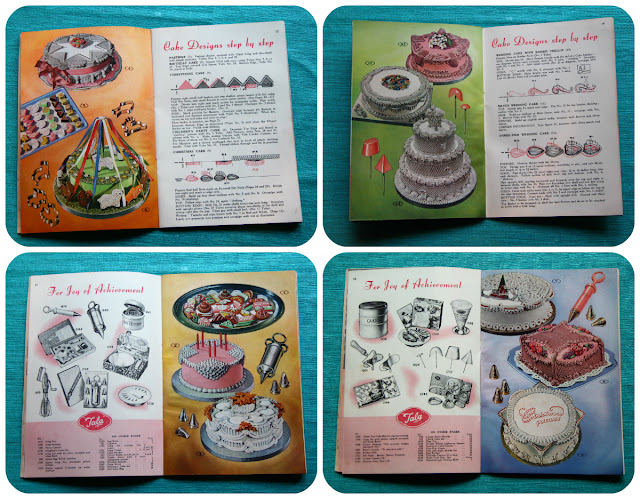 But there's more! The set also contains a booklet, called "How to Decorate a Cake", for which Tala collaborated with baking and icing expert, Anne Anson.

The booklet is a feast for the eyes, full of brightly coloured, mouth-watering illustrations of spectacularly decorated cakes and biscuits, with detailed instructions on things like flower making and designing icing patterns. 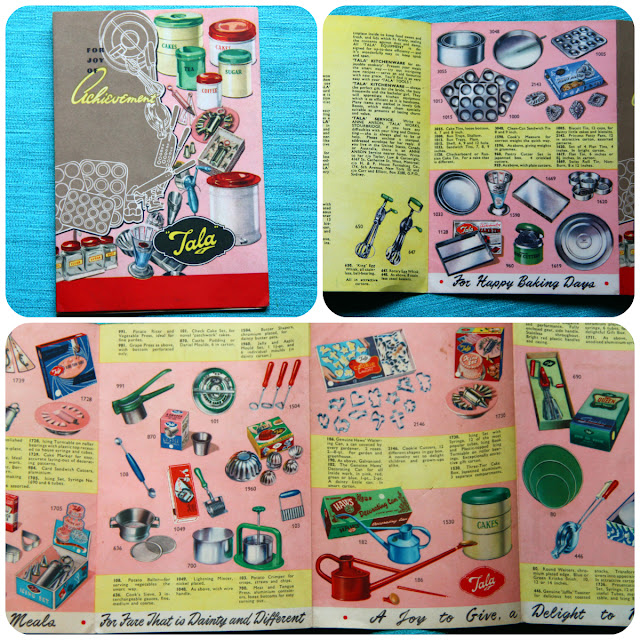 But the box had yet another surprise in store!  Look at this wonderful Tala catalogue listing all the available items in their bright and colourful range of kitchenware at that time. Most of which I wouldn't mind having in Dove Cottage's kitchen, I must add. 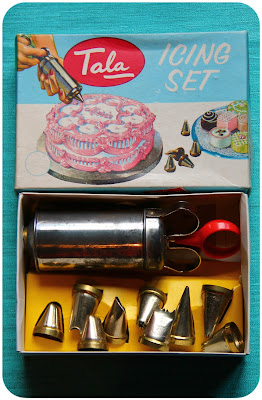 In spite of never having iced a cake, this isn't even our first icing set.

Slightly younger than our recent find, but still dating from the 1950, is this set, containing just the syringe and six icing tubes. At least that's what it said on the box. But look, we've got an extra three!

We found it while on holiday in Wales, in an Aladdin's cave of an antique shop in Newcastle Emlyn. 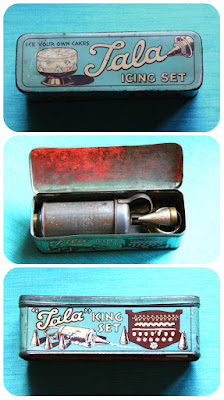 This cute little tin contains our oldest set, bought from a delightful shop selling kitchenalia in Rye, when we were holidaying in the area in 2005.

I'll need to show you some more of our kitchenalia treasures one day ...

As for the flea market, will we be going again? Never say never, I'd say!

Linking to Patti's Visible Monday at Not Dead Yet Style!