Water under the bridge

Rather unexpectedly, the sun was out in full force on Sunday before last.

With no flea market on the cards and uncertain weather being forecasted, we hadn't made any plans but, knowing a good opportunity when we see one, we dropped everything, made a couple of sandwiches, and stepped outside. 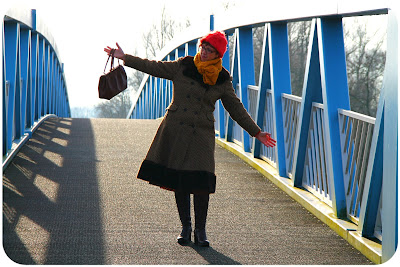 Having both in abundance, I'm making an effort to wear more skirts and blouses.
I admit that, given the choice, I usually opt for frocks: you just pick one, add a belt and some accessories, add a cardigan or jacket if the weather's colder, and you're ready, which is quite convenient when you're forever strapped for time. 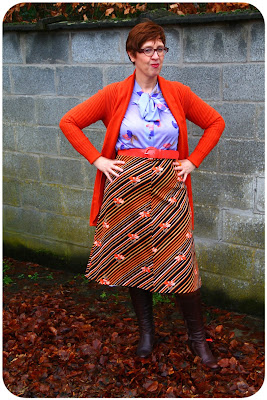 Planning an outfit around separates requires a little bit more thought, and I often play it safe, by combining a plain skirt with a patterned blouse, or vice versa.

Ever since I started blogging, though, I've been encouraged to be more adventurous and try some pattern mixing, with rather, err, mixed results! 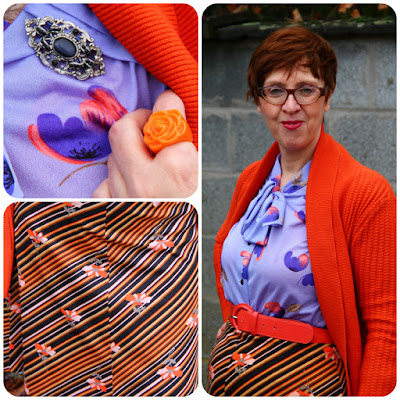 The skirt is an old favourite. In the past, I wore it with a plain orange-red blouse. Now, I wanted to try something different for a change and I must say that I'm quite pleased with how it turned out.

While exploring different possibilities, I noticed a resemblance in the stylized flowers appearing in both the skirt and the blouse, tying the outfit together. 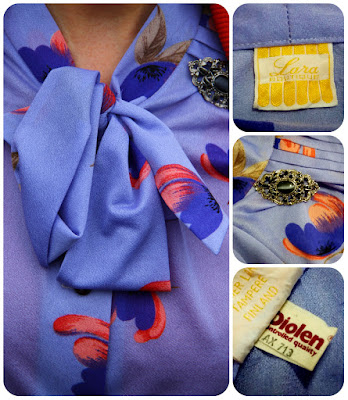 The  lilac pussy-bow blouse, with its pattern of purple and orange flowers, and tiny black pearly buttons, isn't an obvious choice for this time of year. As the fabric is quite thin, I wore a long-sleeved tee underneath. The blouse's label was hiding a second label underneath, and look: it's Diolen!

I added an orange belt and topped it with my long orange cardigan, which I've been wearing rather a lot. It's quite surprising how many outfits it goes with! We decided to walk along the river. Or rather, rivers!

About 15 kilometers downstream from Lier, the little town we recently visited, the river Nete arrives in Rumst where it joins the river Dijle arriving from Mechelen, giving birth to the river Rupel, the only river in Belgium which isn't born from a source.

This watery beauty spot is part of so-called Riverland (Rivierenland), a water-rich region in the southwest of the province of Antwerp, where no less than five rivers are determining the landscape. 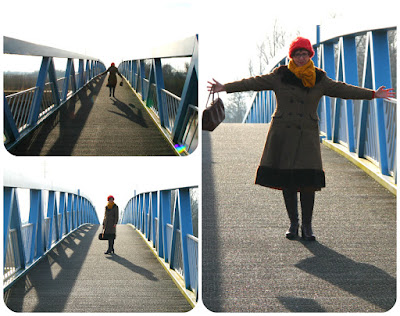 The scenic point in Rumst, where the three aforementioned rivers meet, is the perfect starting place for walking and cycling, and the rivers' dykes and towpaths form the backbone of a footpath and cycle network. 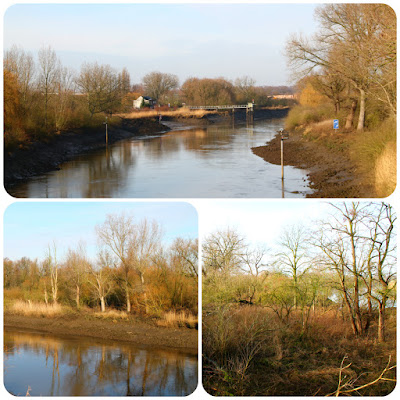 The dykes and towpaths give access to various nature reserves, providing diversity and the possibility of shorter and longer, circular and linear walks.

You can easily put together your own walk with the help of a handy and comprehensive map of walks.

Unfortunately, the towpaths and the bridges are regularly being terrorized by groups of cyclists, identically dressed in typical cycling attire, who look down their noses at ordinary walkers and people riding their bikes.They are a real plague and when out walking one must be prepared to jump out of their way or be mown off the path. 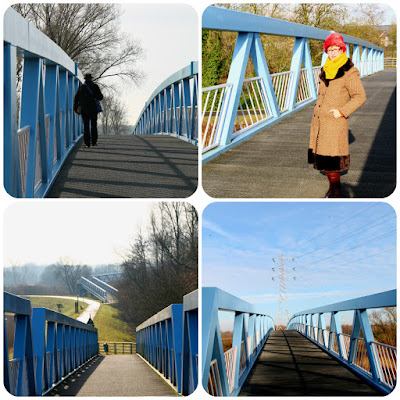 One such group arrived with screeching brakes just after we'd crossed the second bridge. They'd stopped for a drink and I could hear them sniggering at the sight of my hat when we walked past.

Not that I care. The thought of being dressed in one of those silly monkey suits they were wearing fills me with horror. 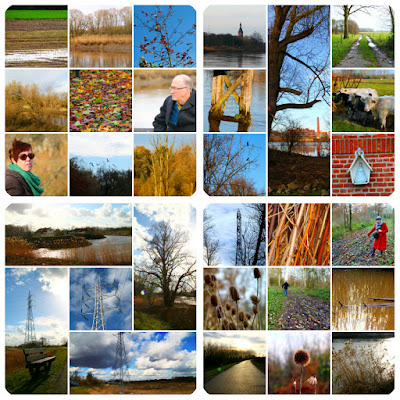 We have often visited this area in the past, just walking the towpaths in either direction or veering off them to explore the sometimes muddy byways. Once, on a particularly balmy day in December, we did a full day's circular walk.

The above photo collages (which before blogging I posted on my Facebook page), are dating from 2013 to 2015.

I couldn't quite believe it's been that long since we've been there and that I've therefore never blogged about the area before ... 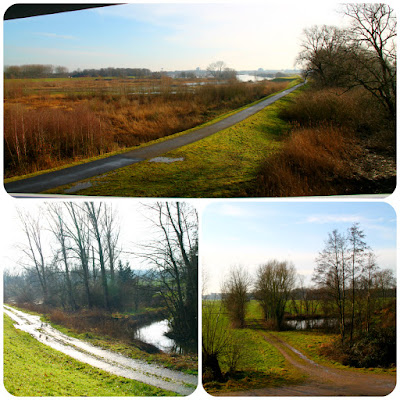 This time, we crossed both bridges and walked in a westerly direction, along the river Rupel, with its rich history of brick-making on the right bank.

Then we veered away from the river onto a path to the left,winding through gently undulating fields and meadows, with far-reaching views and a backdrop of great big skies. 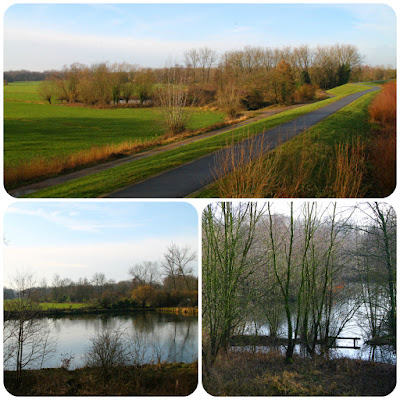 Upon reaching a bench we'd spotted from a distance, we sat down to eat our sandwiches, the sun warming our backs. 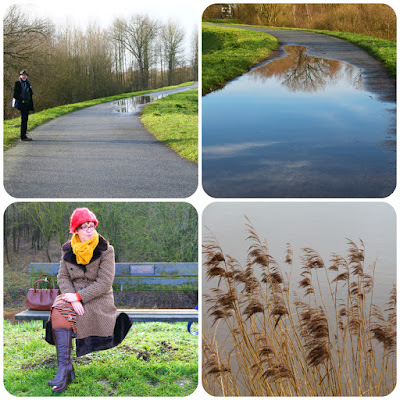 Afterwards, with the sun regularly dipping behind the clouds, we walked back towards the bridges, admiring their clever construction, somehow fitting seamlessly into the landscape. 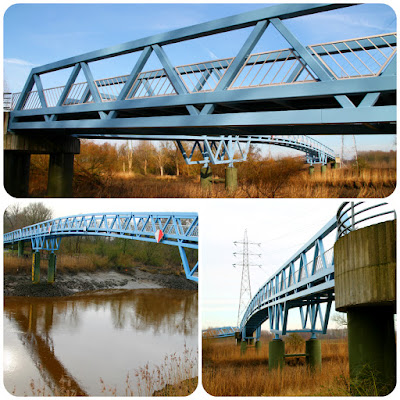 Crossing once more to our starting point, the sun had admitted defeat, giving free reign to the eternal blanket of clouds. But never mind, we'd had our Vitamin D fix!

At a chalet belonging to a fishing club, frequented by locals who were playing cards and watching sports (cycling, of all things!) on television, we had a Belgian cappucino, topped with a snowy mountain peak of whipped cream! 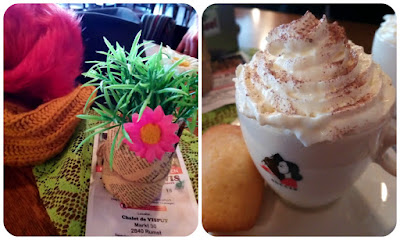 I'm taking my outfit, including crazy hat, to Patti's Visible Monday at Not Dead Yet Style!