Opening our curtains on Sunday morning, we were met by a strange phenomenon: a bright blue sky and pale amber sunlight. After all those grey days, it felt really weird, as if aliens had landed in our back garden.

No time to waste, so after breakfast we dressed warmly (it was a bit chilly) and went outside for a long overdue top up of our Vitamin D levels. 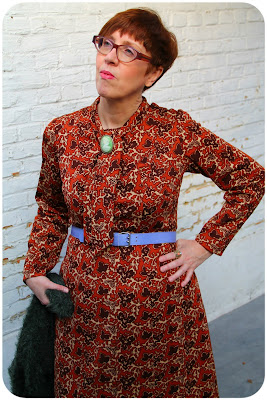 This dress, in a funky rust and brown printed fabric, was a € 4 bargain from Think Twice, bought back in November. I secured its tie with a Cameo brooch with unusual pale green background, and added a belt in forget-me-not blue. 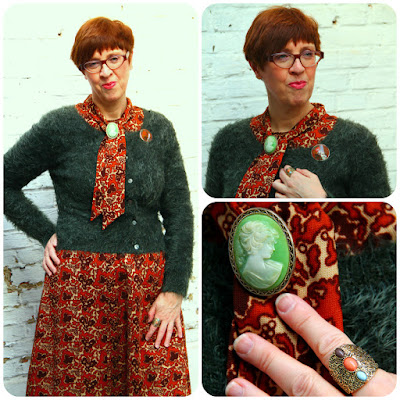 On top went the "hairy" green cardigan I'd charity shopped on Saturday, adding a contrasting rust coloured enameled brooch. The ring is one of my € 1 buys from last week. 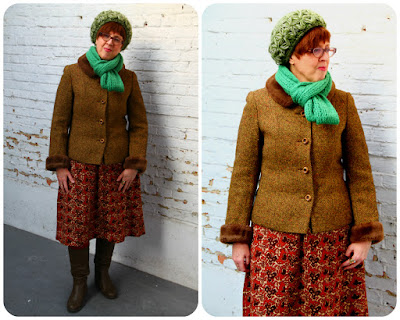 My Tweed jacket, which you have seen before and is part of a suit, kept me warm all day, helped by a green knitted scarf and green woolly hat. I wore flat heeled boots this time, a very comfortable pair which was definitely made for walking!

Our destination was a small but charming town less than half an hour's drive from Dove Cottage, which goes by the name of Lier. 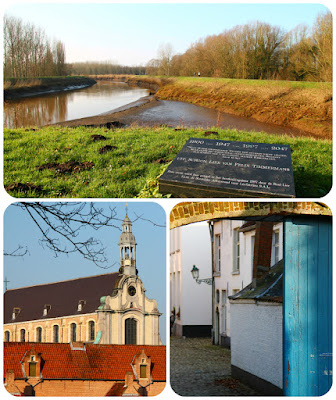 We parked on the outskirts of town, then walked along the river's towpath until St Margaret's Church could be glimpsed rising above the rooftops, shimmering brilliantely against the deep blue of the sky.

The church is reigning over the cobbled streets of the enclosed beguinage, a UNESCO World Heritage Site since 1998. 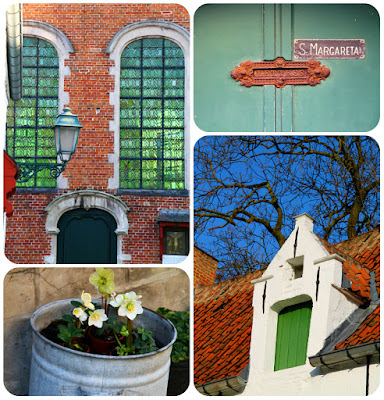 In its quiet streets time seems to stand still, in spite of the constant stream of tourists, their voices echoing in this tranquil place, where once widows and unmarried women led a religiously inspired but independent life, under the leadership of a "grand dame", or "grootjuffrouw" in Flemish. 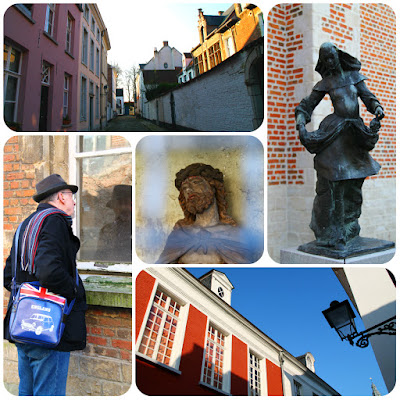 Surprisingly we almost had the place to ourselves on this sunny Sunday morning. When we passed one of the beguinage's gates on our way back in the afternoon, we could see that it was quite crowded.

They say the early bird catches the worm. Well, here the early bird was rewarded by endless photo opportunities without having to constantly work around the crowds!

This particular type of beguinage is called a 'street beguinage", and the one in Lier has 162 houses spread over eleven narrow streets. 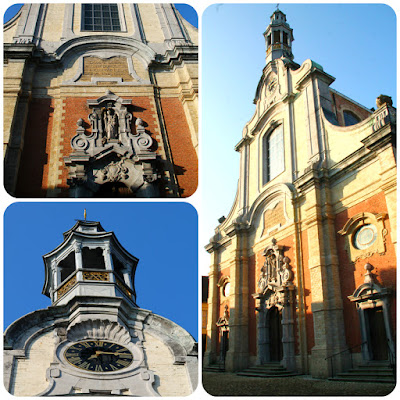 At the centre stands St Margaret's Church, constructed in the 17-18th century. Construction started in 1664 and the church was dedicated in 1671. The top section of the front wall, together with the bell tower, was only completed one hundred years later. This period of time is shown by the architectural styles: while the main part of the church is baroque, the bell tower shows a clear rococo influence. 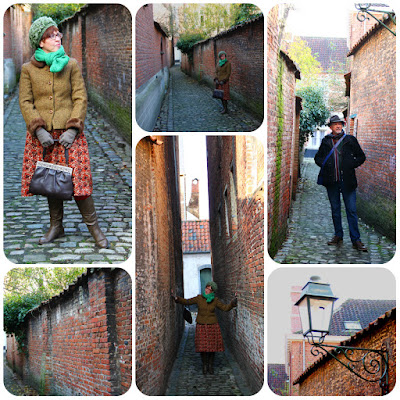 This narrow passageway is called "Hemdsmouwken" (meaning "shirtsleeve") due to its shape, and it is only 98 centimeters wide at one end. It was originally meant as a fire-break, to stop fire from spreading from one row of wood-and-loam houses to another. 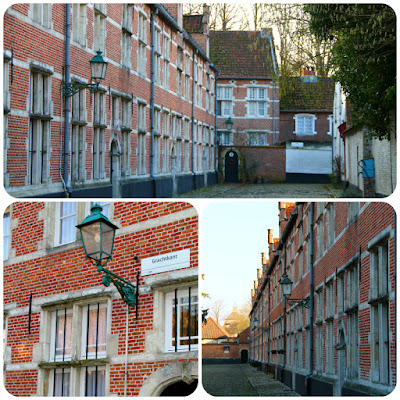 The houses in this street, dating from around 1720, were the beguinage's last extension. With their generous proportions, they were inhabited by rich and aristocratic ladies. They were built on the site formerly used by the beguines for washing and bleaching linen and wool. The street's name, "Grachtkant" (meaning "canal side"), refers to the beguinage canal which used to run here.

By the time we left the beguinage, our stomachs were rumbling, so we ate the sandwiches we'd brought sat on a bench overlooking a bend in the river. 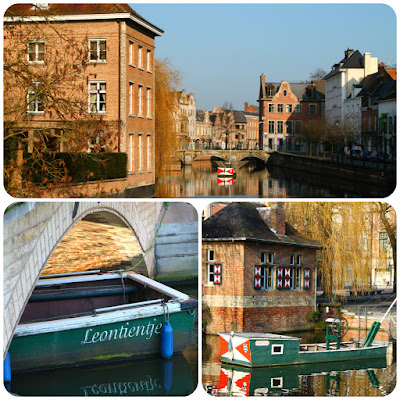 Afterwards, we strolled towards the town centre, along a scenic and much photographed stretch of the river, with classic views of the Hoogbrug (High Bridge), with some old town houses beyond. 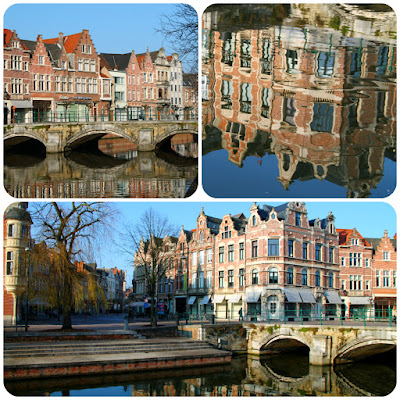 Across the river is the picturesque building, "De Fortuyn", its striking, red and green shuttered façade, enhanced by the blue of the sky, meeting its reflection in the gently rippling water.

Can you spot the duck who had the audacity to disrupt the building's mirror image? 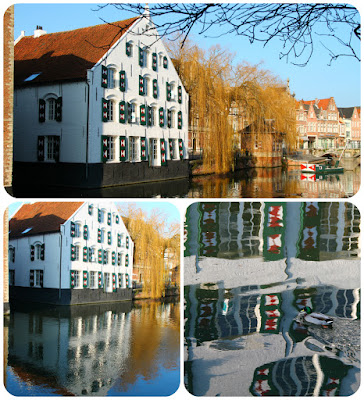 As we were in need of a hot beverage by then, we decided to check if the coffee shop we'd often frequented in the past was still in business. It was, so we sat ourselves down and warmed ourselves on cappuccino and hot chocolate, for which I seem to have a craving lately. 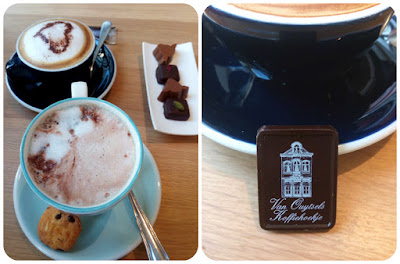 We'd ordered some chocolates (pralines) to go with our drinks, and Jos's coffee came with a complementary chocolate with the shop's name printed on it. 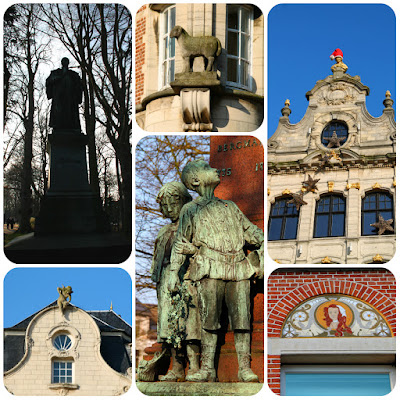 We made our way back via the Grote Markt, Lier's main square, and through Lier's main shopping street until we reached the town ramparts.

The statue on top the building on the top right is still sporting a Santa hat. Somebody should tell him Christmas is well and truly over! 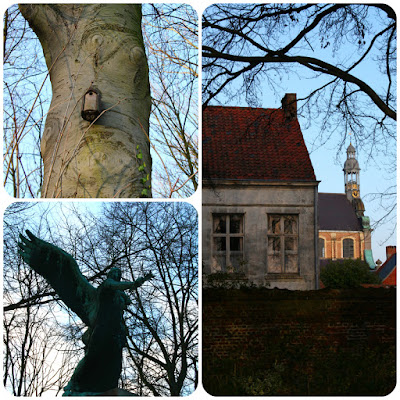 Upon reaching the ramparts, which form a green belt around the town centre, we followed these until St Margaret's Church and the beguinage came into view, and we were nearing the end of our walk.

By then, clouds were starting to gather once more, a foreboding of the stormy weather to come.

Linking to Patti's Visible Monday at Not Dead Yet Style, as usual.
Posted by Polyester Princess at 11:19