All silent save the dripping rain

It seems I am seriously lagging behind. Another weekend has come and gone and I've yet to continue telling you about the previous one!

I left you on Saturday before last, riding my bike dressed in my 1980s batwing dress. But obviously we did something else as well that day. Can you guess? Yes, we were off to the charity shops!

Our first stop was a shop which has somewhat fallen out of grace. It used to be one of our favourites, as its shelves could always be relied upon to yield a couple of treasures, but lately we have once too often left it empty handed. They also tend to be a bit more expensive, especially when it comes to vintage items, sometimes quite ridiculously so! 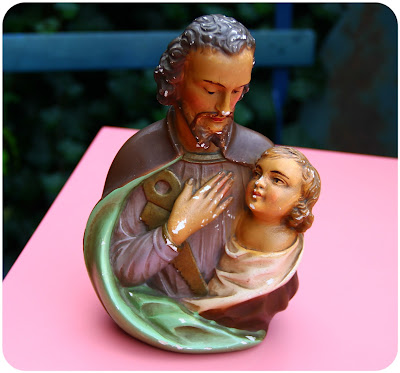 So, imagine our delight when minutes after walking in we spotted this slightly battered plaster bust of Joseph and the infant Jesus for just a few €.

Although we are not religious, this is just the kind of quirky thing to appeal to us. In fact, we already have a motley crew of plaster saints living at Dove Cottage. Surprisingly this is our first one featuring Joseph who, after all, is Jos's namesake! 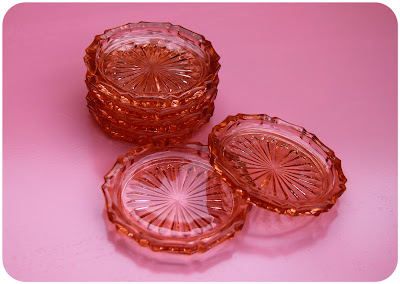 Then, there was this set of pretty rose coloured glass coasters, priced at € 1. 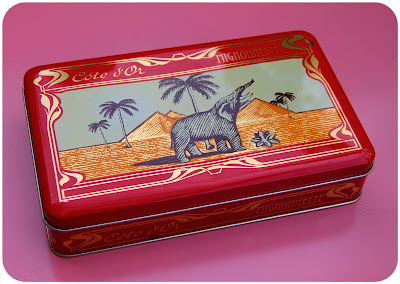 This decorative tin used to contain chocolates called Mignonettes by Côte d'Or, which is a major Belgian chocolate brand. 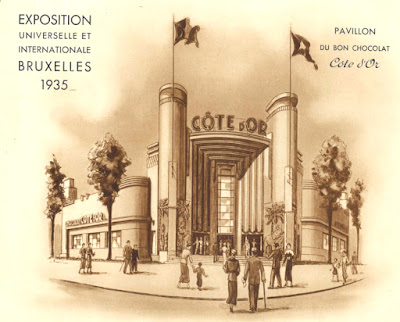 The chocolates, it seems, were never meant to come onto the market. In fact, they were produced especially for the Brussels International Exhibition of 1935, where they were distributed among the visitors to their pavilion.
The miniature chocolate tablets proved to be so popular that Côte d'Or decided to put them into production, and they are still going strong today.

Now, let's get back to Saturday!

The charity shop's large clothing department didn't deliver, as the only thing I found was a new to me yellow wool scarf, which admittedly I've already been wearing for most of last week.

Our next stop was the charity shop in our own village. This used to be a smallish and rather cramped one, but it has recently more than doubled in size. Some of the shelves and racks were still waiting to be filled, but I promise to take some photos once all is finished. 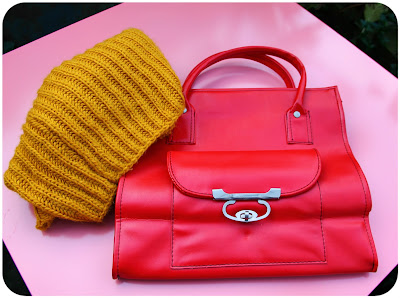 While I unearthed this pristine red vinyl bag (seen here with the yellow scarf), Jos found an album of 78 rpm records, all in perfect condition. The album itself, and most of the records, came from a well-known shop in Brussels called Cado Radio.

Back at home, we spent the rest of the afternoon listening to the records, most of which were quite good. They got Phoebe's approval as well! 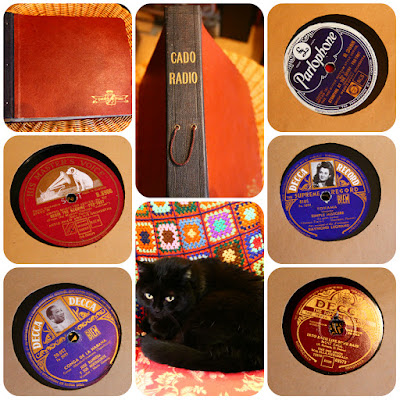 On Sunday, we were at a bit of a loose end. Although we'd woken up to sunshine, more rain had been predicted and indeed we could see dark clouds looming, which ruled out a walk.

There was an indoor flea market in Antwerp, but as it is very much in decline, we'd vowed we wouldn't go near it again. I mean, even the Brooch Lady, who could always be relied upon, and for whom we often went especially, has been giving it a miss lately!

Still, with nothing else to do, and not inclined to spend the day at home, we ignored our self imposed ban, and went ahead regardless. 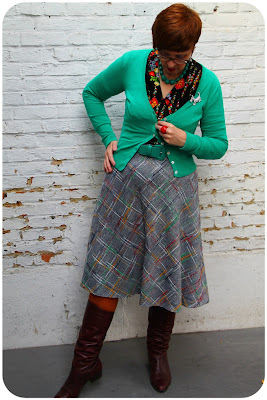 I dressed in a grey wool skirt, featuring diagonals in white, yellow, red and green, which I combined with a floral print V-neck blouse. On top, a green cardie, to which I pinned Gisela's Scottie dog brooch. 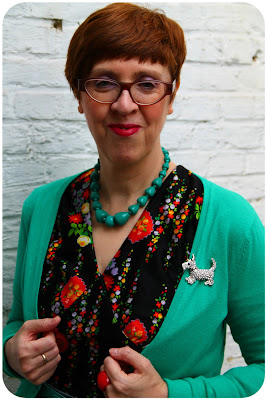 Further accessories were green beads, a green vinyl belt and a red plastic ring. I wore my burgundy boots again. They are so warm and comfortable, with a reasonably low heel, which is perfect for trawling flea markets. 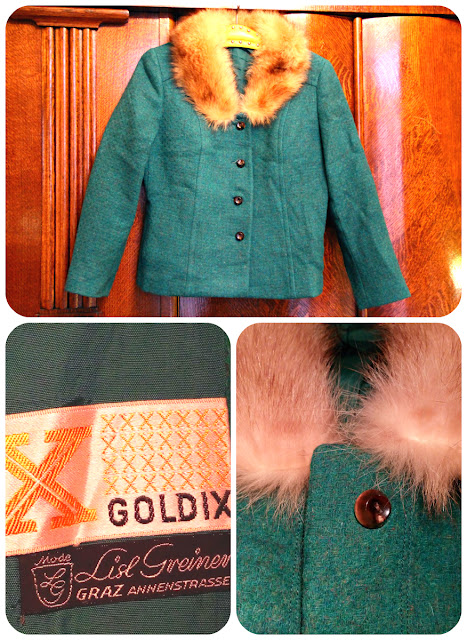 Look at my new jacket! It was bought full price at Think Twice, which must have been the only shop not participating in the Black Friday madness which seemed to prevail on Antwerp's shopping streets. 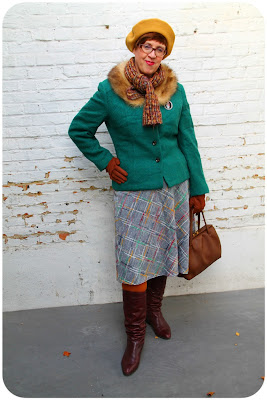 Although I have quite a few green jackets and coats, I'd been looking for a short, fake fur collared winter jacket for ages. In return, and to free up some space in our coat cupboard, I donated another, seldom worn jacket to charity. 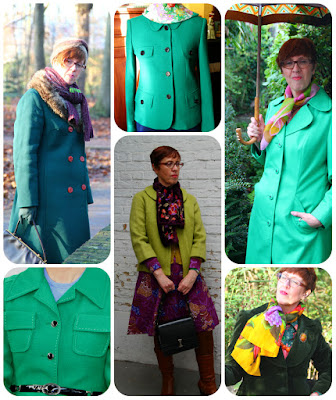 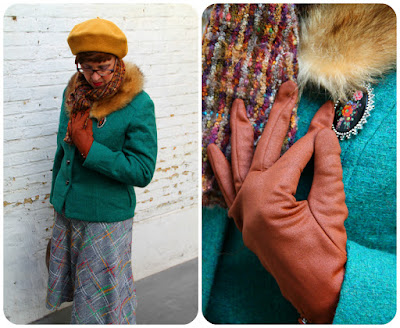 Obviously, the jacket needed a brooch (I later spotted its twin at the flea market!), and as it was quite cold, I wore a pair of thin vintage gloves, my mustard beret and one of my oldest but favourite scarves. 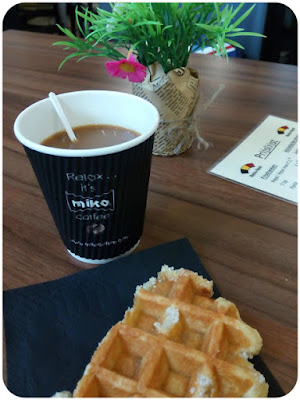 As usual, we took a coffee break about one third into the flea market, this time accompanied by a sugary waffle.

By this time, we have usually already made a couple of purchases. Not now, though.

It seems that apart from the Brooch Lady, some of our other favourite traders were missing as well.

Instead, we trawled through aisle after aisle of discarded toys, heaps of tatty clothing, tasteless decorations and overpriced knock-offs, which made us feel quite miserable. 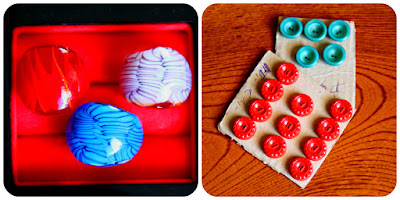 At one point, we feared we'd made a wasted journey and would leave with nothing, but then I spotted these glass rings and, a couple of stalls further on, some vintage buttons for my stash. 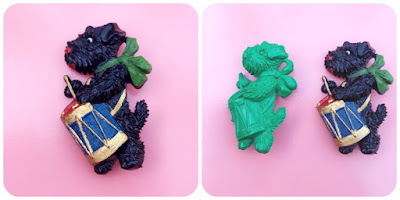 We were almost at the end when my heart skipped a beat upon spying a carton full of celluloid Scottie dog brooches. Unfortunately, the trader knew what they were, which was reflected in his asking price of € 25 per brooch. With heavy heart, I walked away.

Then Jos argued that since we had hardly spent anything, I'd better go back and buy one of the brooches, or I'd be forever regretting it. He was right, so I did and chose a black dog beating a drum. Isn't he cute? He has already made friends with the similar green doggie I bought in Cardigan a couple of years ago! 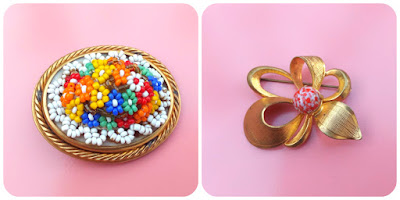 This purchase made, I found two more brooches before we left, for which I paid € 3 each. This, I'm sure, was a steal, especially for the one on the left, whose trombone clasp revealed that it is older than I initially thought it was.

As they say, you win some, you lose some!

Linking to Patti's Visible Monday at Not Dead Yet Style.
Posted by Polyester Princess at 19:38