Last Monday dawned bright and sunny and as I wasn't expected at the office, we took our car and drove to Brussels, about 38 km from our home. The aim of our visit was the Atomium. Our Sat Nav, stubborn as she is (she's a she, called Marie Jeanne), totally ignored the signs to the Atomium as well as a side street, where we could see it beckoning in the distance. When she tried to get us to take the next turning, it turned out to be closed off for traffic. After leading us on a sight-seeing tour past the Royal Palace, we finally managed to reach the main avenue leading right up to the Atomium where, as luck would have it, we soon found a parking space. Quite a feat, I can tell you, since it was a public holiday. 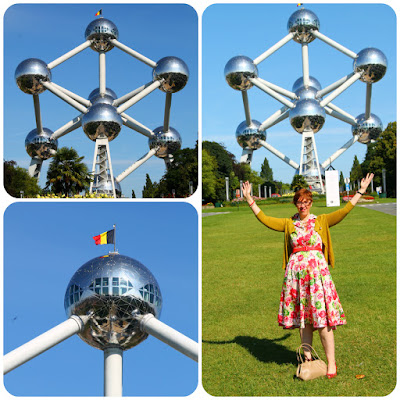 I took the opportunity to pose in front of the Atomium in my new-to-me repro mid-century dress, which I'd especially chosen for the occasion. At first I was a bit reluctant to wear a repro dress, but then it dawned on me that the Atomium is wearing repro as well, the spheres' original sheets having been replaced in 2006! 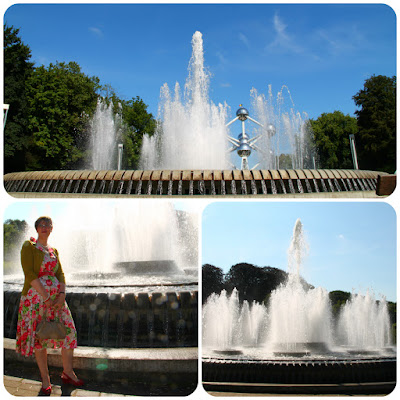 The fountain was already there in 1958, as you can see in this postcard. 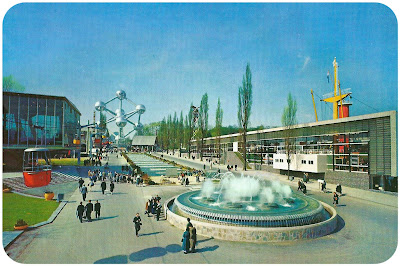 But enough of that, as you will probably be dying for a look inside! 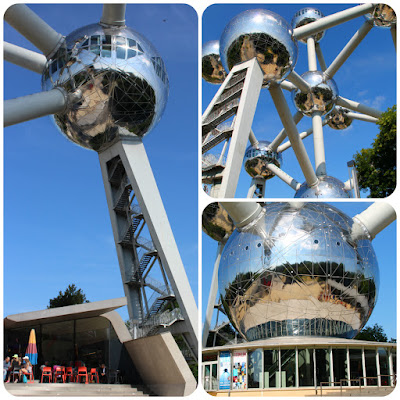 As it was such a fine day, we presumed everybody would be on their way to the coast, but no: it was quite busy, with lots of tourists queuing for tickets and every imaginable language being spoken.

After a security check, we were ready to start the first part of our visit, and awaited our turn to take the lift up to the uppermost sphere. 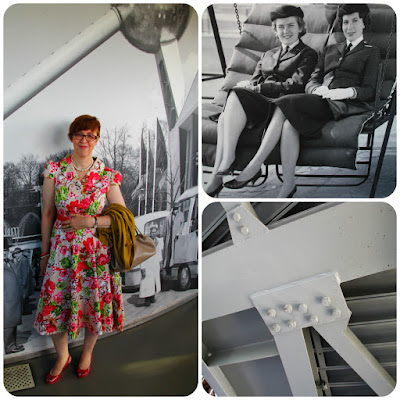 The weather was glorious and so the 360° view from the top was clear. 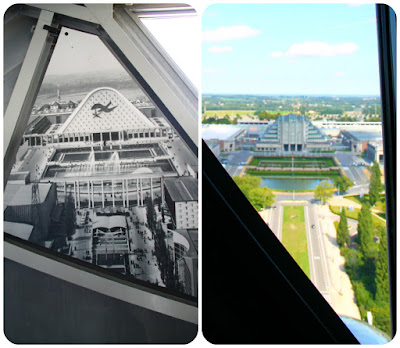 The above two buildings are actually one and the same. It dates from 1930, but in 1958 a new, temporary façade was put in front of it to make it blend in with the rest of Expo 58. 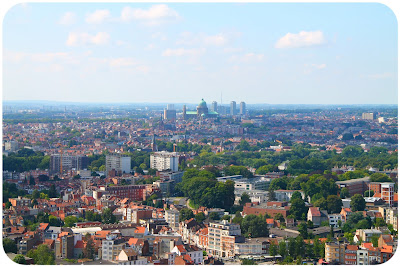 Look at Brussels sprawled out in front of us. 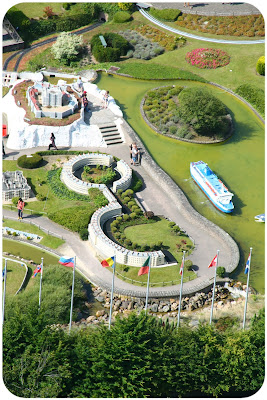 This is "Mini Europe", which is nestling at the foot of the Atomium. Look, here are Bath's Circus and Royal Crescent!

For the second part of our visit, we had to descend to the ground floor again to continue with our tour, this time by stairs and escalators, leading up to middle sphere: a total of six levels.

On the first two levels, there's a permanent exhibition on Expo 58. 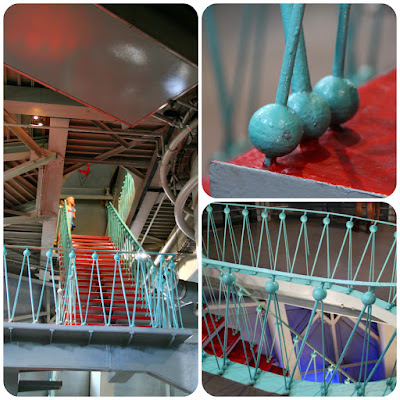 The stairs and railings, with their typical 1950s colours, are still the original ones from 1958. 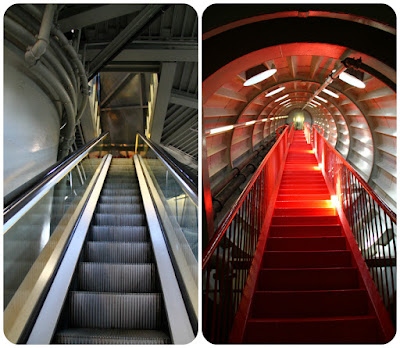 The three next levels are reserved for temporary exhibitions. 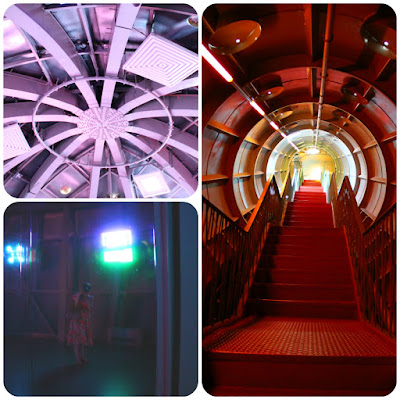 At the time of our visit this exhibition consisted of a sound and light show called Talk and, although the light effects were spectacular at times, it was all rather dark, so that it was hard to appreciate the spheres' layout. 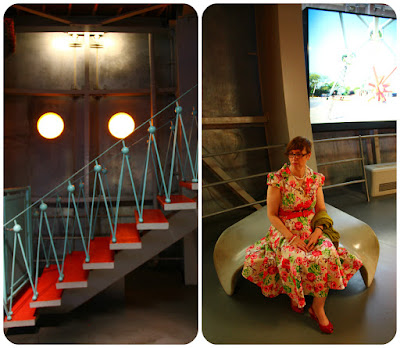 Then it is down again to level six, where there is a viewpoint. 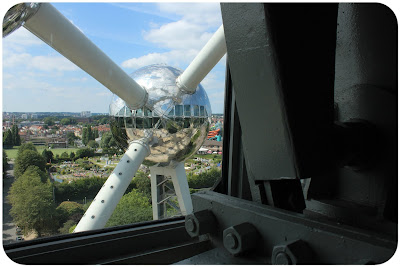 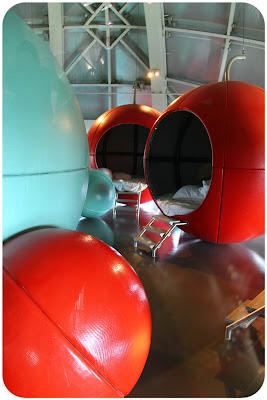 A couple of steps down, you can have a peek inside the so-called Kids' sphere, where groups of children can spend the night. This must be a magical experience! 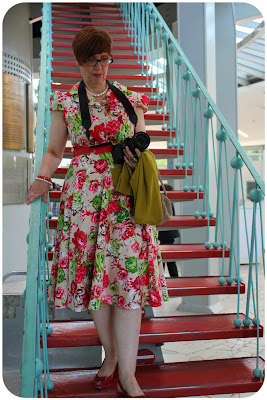 Safely back on ground level, we were starting to feel peckish, so we picked up our picnic basket from our car, and looked for a spot in the nearby Osseghem Park to eat our picnic.


Walking back, we passed the magnificent open-air theatre, called the Green Theatre (Théâtre de Verdure), formed by a series of terraces, supported by stone walls and surrounded by green hedges. 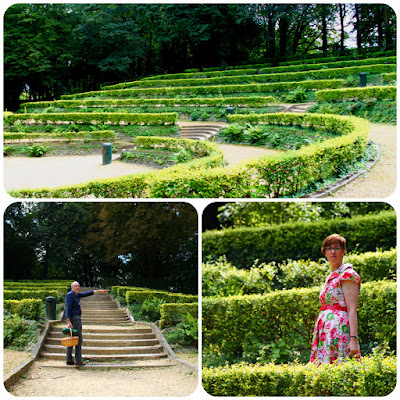 I hope you enjoyed the visit to this unique and unusual building.

In my next post, it will be business as usual, as I've got a few more finds to share with you!
Posted by Polyester Princess at 19:35