Back to the future

In a previous post, I blogged about Jos's home town and its brick-making past, mentioning that the uppermost five spheres of the Atomium in Brussels were visible from a vantage point near his former home. 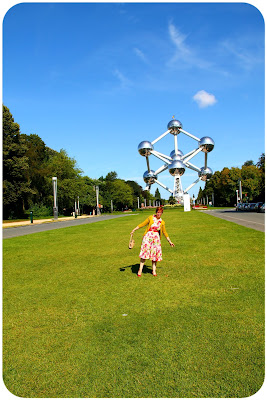 Last Monday, which was a public holiday in Belgium, with the weather being particularly bright and sunny, we decided to join the tourists and pay the Atomium a visit.

It wasn't our first visit by any means: we have actually visited it four times in the 22 years we have been together.


For those of you who are not familiar with this extraordinary building, I will tell you about its fascinating history in this post.

The Atomium was built especially for Expo 58, the world fair which took place in Brussels in 1958, and it was easily the most spectacular piece of architecture at the fair.

Expo 58 was the first major post-war world fair and, as well as exuding an air of optimism, it showcased new technologies as well as innovative architecture.


In fact, quite a few of the pavilions would still be considered modern by today's standards.

The fair was visited by more than 42 million people, one of them an impressionable schoolboy called Jos, whose three visits to the fair instilled a life long fascination for everything related to Expo 58.


(*) Original postcards from our collection

After all, the building-in-progress of the Atomium could be followed from his home town!

In spite of this, Jos did not actually visit the Atomium itself, as it cost a staggering 60 Belgian Francs, whereas an adult entrance ticket to the whole fair was only 30 Belgian Francs in comparison.

The Atomium represents a giant model of a unit cell of an iron crystal (each sphere representing an atom) and was quite a feat in gravity defying engineering.

If you are interested in the technical particulars: the Atomium stands 102 meters tall and consists of nine spheres with a diameter of 18 meters. The spheres are connected by tubes, some of which contain stairs or escalators. 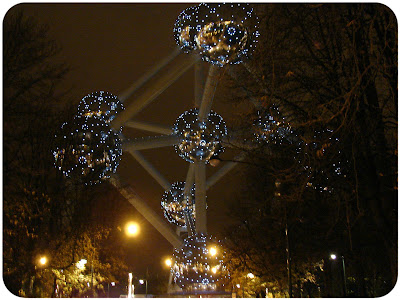 The top sphere, which can be reached by the super fast lift in the central tube, not only offers 360° panoramic views, it also contains a restaurant, where we were treated to dinner by Jos's eldest daughter on his 60th birthday, giving us the chance to see the Atomium lit up by 2970 LED lights at night.

Like most of the pavilions built at the site, the Atomium was not intended to survive beyond the exhibition, but here it is, still there after almost 60 years. It has, in fact, become a Brussels landmark (much as the Eiffel Tower is for Paris), not to mention a popular tourist attraction.

In 2006, the original aluminium sheets which clad the spheres, having dulled with age, were replaced by shiny new stainless steel ones. 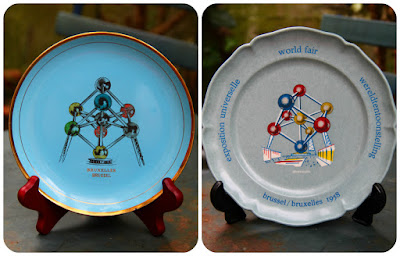 At the fair itself, there was a brisk trade in what we would now call "merchandise": ashtrays, souvenir plates, glasses, key-rings and pins, you name it, all bearing either the Atomium or the official Expo 58 logo. Models of the Atomium in all sizes were a popular choice of memorabilia as well. 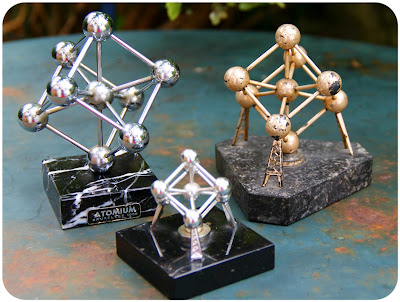 These Expo 58 memorabilia are now very collectible and are being sold for many times their original price. In 2008, which marked the 50th anniversary of the fair, prices even soared to astronomical heights and many items were unearthed from attics where they'd languished for years under layers of dust. 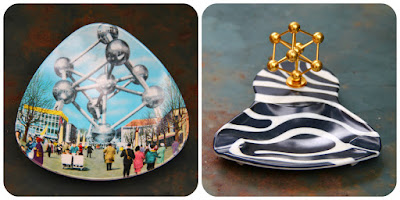 We have a modest collection, which is primarily Jos's, displayed in a cabinet and dotted around the house. 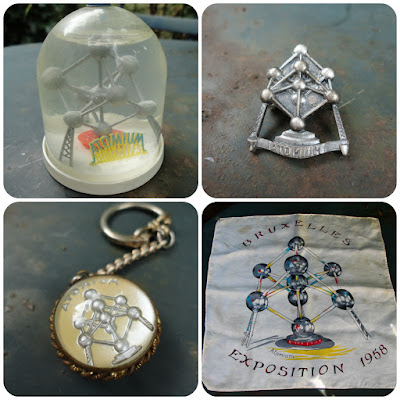 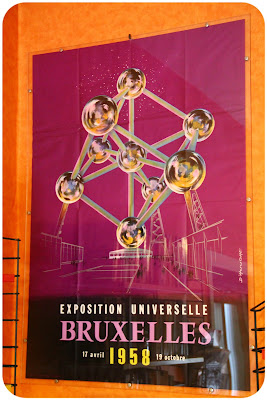 This original poster advertising the world fair is a prized possession, taking pride of place in our living room.


My next post will be all about our visit, on which I invite you to join me again!
Posted by Polyester Princess at 19:29