... I found a yellow basket! I am paraphrasing Ella Fitzgerald and signing along with her popular 1938 rendition of the nursery rhyme, but as I am quite tone deaf, I strongly suggest you plug your ears! 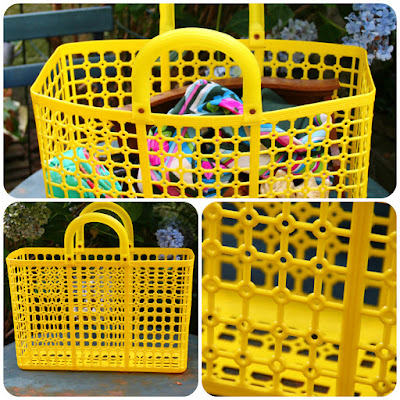 The song lodged itself into my head during Saturday's charity shopping expedition, when I made a final mad dash through the aisle which I'd skipped at the beginning as it was too crowded. There it was: a big, old-fashioned, yellow plastic shopping basket! At € 2, it obviously had to be mine.

We managed to find a few other things too. This particular charity shop has several shelves dedicated to little (and not so little) odds and ends. We love browsing through the assorted array of holiday dolls and souvenirs, Lourdes memorabilia, battered crucifixes, kitsch figurines, candlesticks and so on, as well as a shelf full of miscellaneous things they obviously didn't know what to do with. 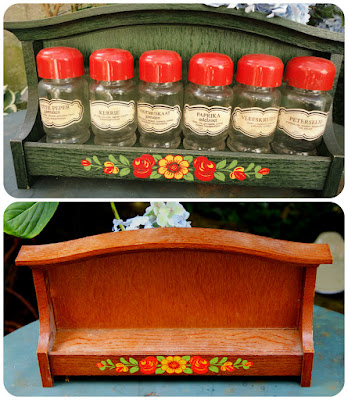 First up was this brown 1970s Emsa rack for storing herbs, which we found a green version of at our local flea market two weeks ago. We already have several items of the same series in brown which compliments the blue of our kitchen walls, all picked up cheaply at flea markets and charity shops. 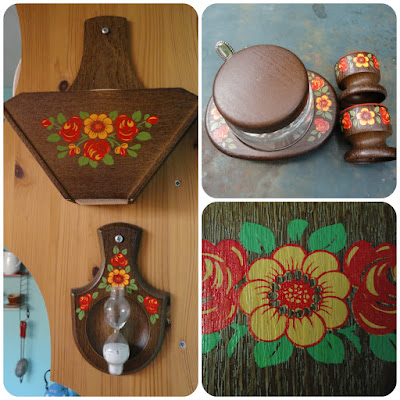 As the green rack was only € 1 and still contained all the - thankfully empty! - herb pots, we bought it anyway, knowing we'd find the brown version at some point, which we now did. The brown rack was also € 1, but without the pots, which is still a good price as these Emsa items appeal to what I call "the retro crowd" and tend to command much higher prices at vintage markets and online. 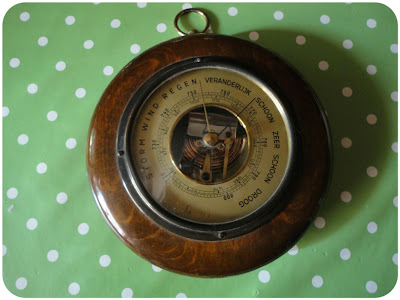 From the same shelves we plucked this shiny barometer to go with Jos's collection. We are slowly running out of wall space to accomodate them all. Now, if only they'd tell us the weather will be fine ...

This little wooden souvenir bowl from Nice is particularly poignant in view of the tragic happenings on July 14th, as it depicts the ill-fated Promenade des Anglais. 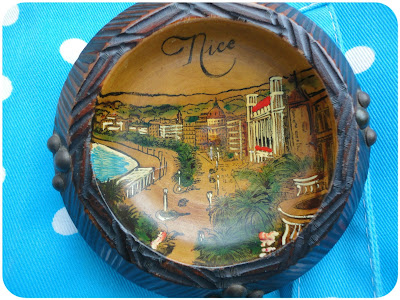 On a more positive note, these two cute little dogs make me smile whenever I look at them. Although I am more of a cat person, with their cheeky faces they were quite impossible to resist.  They are just the right way of kitsch! 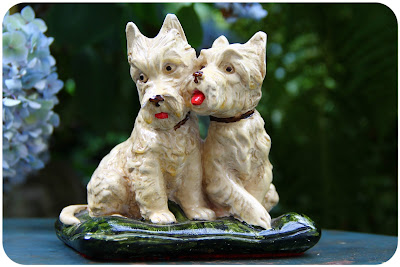 Two belts and a scarf also came home with me. A girl can never have enough of those, can she? 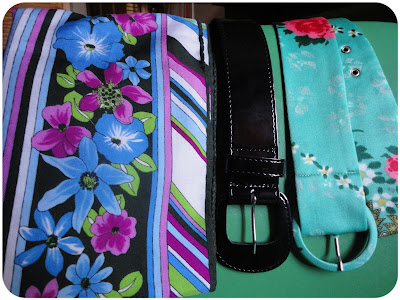 Oh, and this is what I wore on Saturday: a white crimplene dress with a crazy pattern in browns and grey, with a shiny brown vinyl belt at the waist. 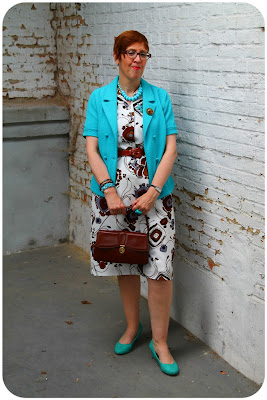 Even though I love brown, and in spite of the in-your-face pattern, it did look a bit boring at first, so I accessorized it with some blue and turquoise.


Only the plastic beads are vintage. The chunky ring and bracelets were picked up cheaply in the high street and the shoes are from a local village shop. I found the blue birds brooch in a lovely shop in Cardigan, called Mundos, a couple of years ago. I have it in green as well. 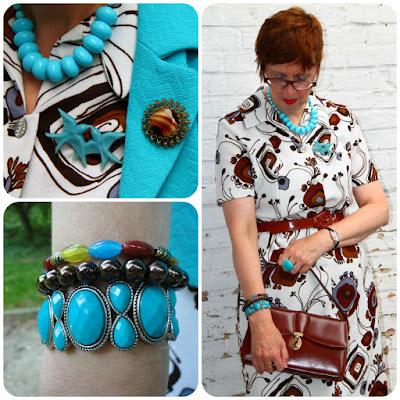 I chose a small burgundy brown handbag which was just big enough to hold my weekend essentials. 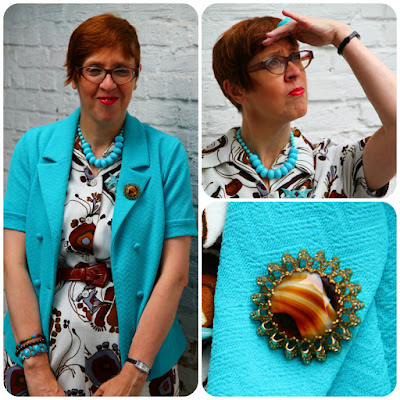 The brooch adorning the lapel of my short-sleeved turquoise crimplene jacket also came from Cardigan, where it was charity-shopped this year. 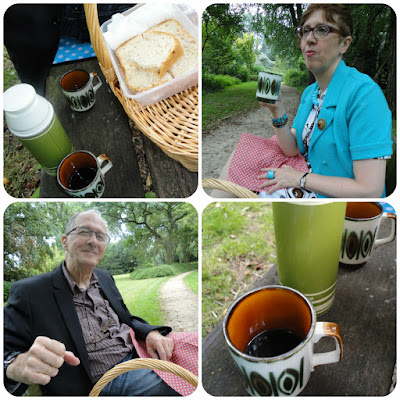 Although it was quite cloudy, it was still warm enough for an outside picnic and a short stroll through the park. 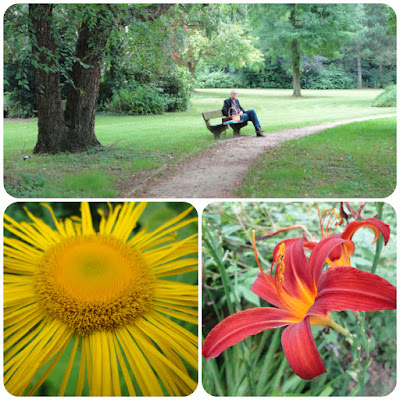 We hadn't been there for several months and the planting was quite lush and colourful, especially around the water garden.

Yellow Inula helenium, which has been planted here in abundance, is a magnet for a multitude of bees.

Look at the gorgeous colour of this red and yellow daylily (Hemerocallis), whose blooms sadly only last a day, 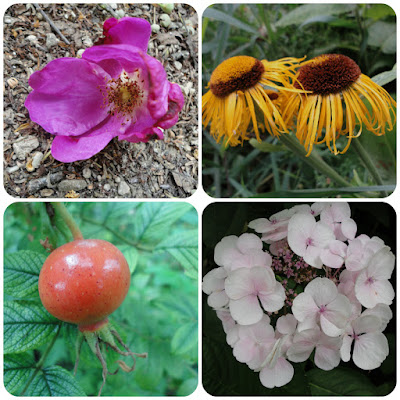 There were several varieties of Hydrangeas, but I was particularly taken by this timidly blushing one..

The dog rose bloom was lying virtually intact in the middle of the path. I wonder what happened to it.
Some of the dog rose bushes were carrying quite a few rosehips already.

At least the park was not inundated with smartphone carrying, Pokémon hunting individuals, so that we were able to enjoy our picnic in peace.

Last week, police had to close off traffic in one of Antwerp's shopping streets due to overcrowding caused by the game.