Grabbing a slice of history

Finally, my blog has reached the end of November, so that for the moment I am not lagging behind as much as I usually do.
Admittedly, it has been a quiet couple of weeks, the dark and often wet days offering little or no incentive to spend our time outdoors. Additionally, as the lack of daylight continues to keep us from taking photos of my working day outfits, it'll be mainly those I wore from Friday to Sunday which you'll get to see here. 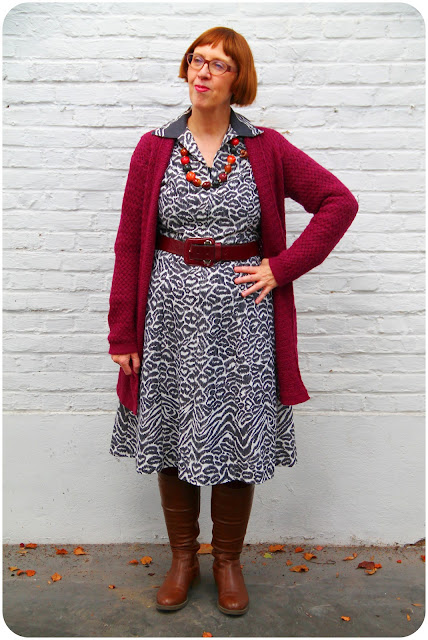 Although there was no shortage of sunshine on Friday 25 November, the mercury kept flitting around 10°C, threatening to dip into the single digits without a moment's notice.
I'm veering towards my warmer dresses on days like these, preferably with a modicum of wool content. This fusion of leopard and zebra pattern ticked all the boxes that day. Charity shopped about a year ago, surprisingly it was the first animal print garment to join my wardrobe since the leopard print mini skirt of my punk days. Not counting Great Aunt Josephine's heirloom leopard coat, obviously. You can find its story here if I have piqued your interest. 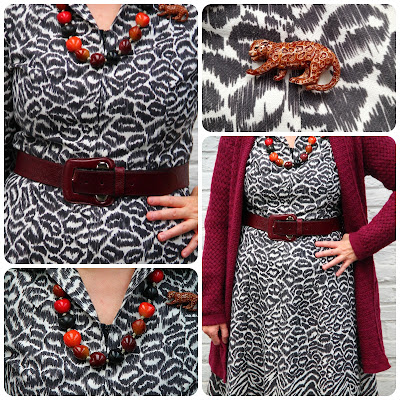 As I last wore the dress with classic red, I opted for berry colours this time, adding a large-buckled belt and long-line cardigan which were both charity shop finds at one time or another. The necklace, whose berry beads are joined by brown and orange ones, was charity shipped as well. I picked it up the other week, but I forgot to photograph it at the time. And what better brooch to add than the vintage leopard which was a flea market find in November 2019?
We were all set to go on our weekly round of the charity shops, but while Jos was once again fulfilling his daily task as newspaper boy, I took the opportunity to photograph my recent loot from Think Twice. As they'd just started another round of their famous sales, I'd spent Thursday's lunch break walking to my favourite branch for a long overdue rummage. 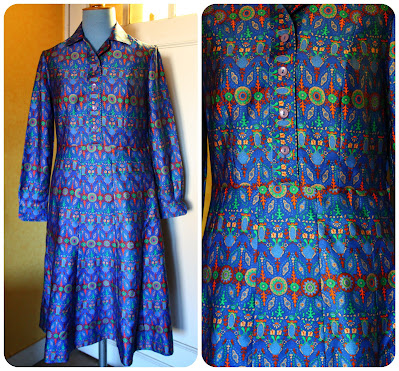 First up is this vintage cobalt blue C&A frock with its psychedelic floral pattern in light blue, green and orange. It was love at first sight, so I ignored the fact that the zipper was stuck and I wasn't able to try it on.
Back at the office - work was very slow, as our counterparts in Miami were celebrating Thanksgiving - I set to work and finally got it to budge by applying some lip balm as a lubricant and giving it a mighty tug with a pair of pliers. 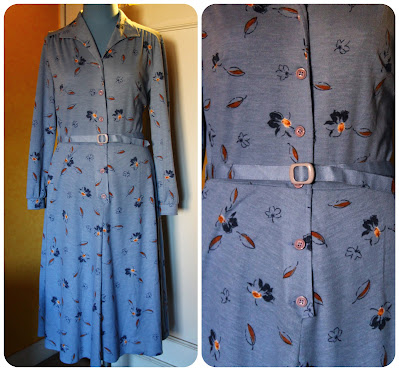 This pale blue wool blend shirt-waist dress with its sprinkling of leaves and flowers is from the Finnish Figura label. I love that it still has its original belt, although knowing me chances are that I will wear it with a complimenting or contrasting one from my collection instead. 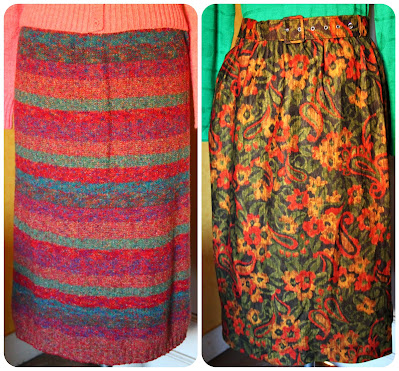 I grabbed these two skirts as well. The one on the left is a lined knit, although I cannot vouch for its wool content as the identifying label has been cut out. It still bears its origin label, though: it's made in France by/for a company called Bleyle. Interestingly, when I googled the label, it turned out to be a German company which was established in Stuttgart in 1889.
The label of the green, yellow and orange floral skirt on the right says Separates by Delta, and proclaims that it was made in Australia. Not something we see very often here, so I can't help but wondering about its journey to the Northern hemisphere ... 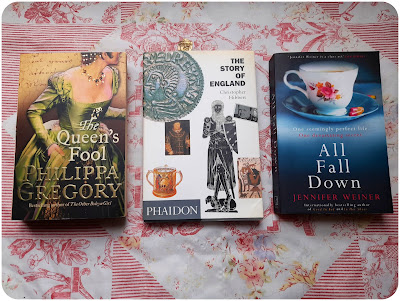 But I mentioned charity shopping, didn't I, so let's have a look at that Friday's finds!
We drove to the edge of town charity shop first, but the only thing that ended up in my basket was the Philippa Gregory book on the left. As our lovely Vix has more than once been singing the praises of this English historical novelist on her blog, I thought it was worth giving one of her books a try.
In order to fully appreciate them, though, I'd better brush up on English history. So wasn't it serendipitous that I found The Story of England by Christopher Hibbert on the shelves of the second shop we visited that day? It's an entertaining and not too taxing guide to England's political, economic and cultural history from the Neolithic age to the the early 1990s, when the book was published.
The same shop's shelves also yielded the Jennifer Weiner novel on the right. 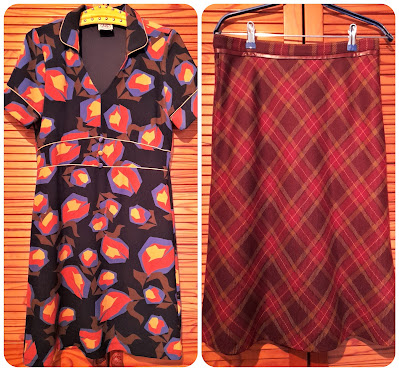 The shop's clothing aisles didn't disappoint either, with the funky short-sleeved dress by the Dutch Le Pep label and the tartan Zara skirt in delicious berry shades.
The colours of the short-sleeved jumper by Esprit were one hell of a job to get right. When I finally managed to capture the correct shades of green and purple, the pattern of horses and horseshoes were bleached of their palest of pink colour.
The orange cardigan with its lacy sleeves and inset at the back is by ... you'll never guess it ... Who's That Girl! 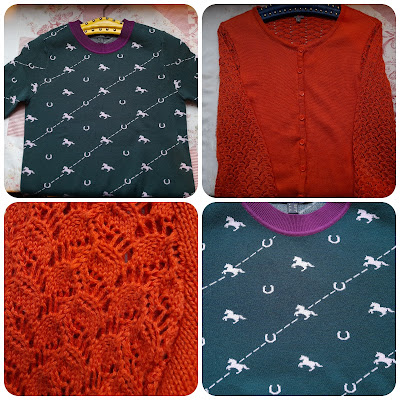 Saturday's weather could have been a carbon copy of Friday's.
With a steep drop in temperature forecasted for the week ahead, it was high time I finished my seasonal changeover by getting the last of the warm woollen skirts and dresses out of the antique linen chest.
Most of my Summer frocks, in the meantime, had been languishing inside the built-in cupboard in the corner of our bedroom, victims of my procrastination habits. Now that I'd freed up some space in the linen chest, I transferred them to the correct vacuum bags and, with Jos's assistance, had our vacuum cleaner suck the air out of them. By the time I closed the lid on the linen chest for the season, however, I was starting to get a niggling pain in my lower back as a result of all that lifting and carrying around. 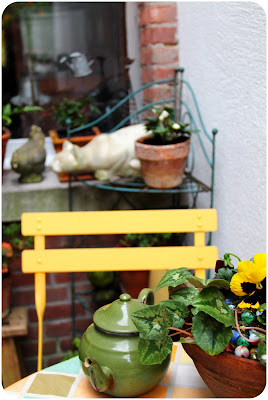 No rest for the wicked though, as back downstairs, we got a little surprise! News flash: our neighbour had finally removed the scaffolding from the passageway! It still needs a layer of paint in the colour of our choice, but that will only happen in Spring. Obviously, wild horses couldn't have kept us from sprucing it up a bit and putting some of our stuff back. We also decided to move our little yellow table and chairs - previously residing at the back of our garden - into the passageway. By then, my back was truly hurting so we reluctantly called it a day.
Anyway, here's a sneak preview ... more to come in my next post! 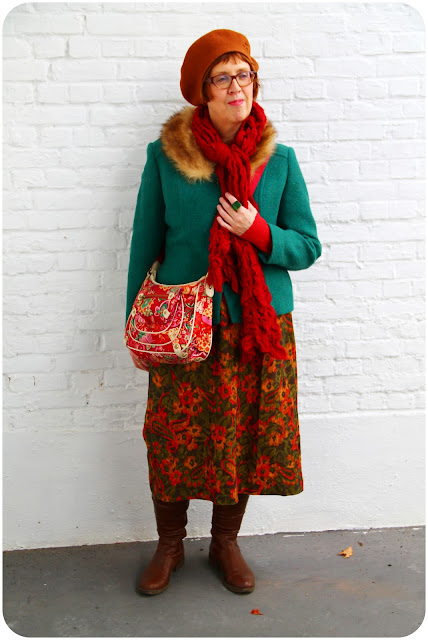 And yes, I wore this outfit to do garden chores! Minus the fur-collared jacket, beret and scarf, obviously. These I only wore for running an errand in the afternoon. In the garden I layered an old hoodie and my equally ancient denim gardening apron over my skirt and jumper, both for warmth and to keep my outfit from getting ruined.
I'd decided to take the Australian made skirt on its maiden voyage and added some additional sunshine by wearing it with a yellow leaf and flower patterned jumper which I found at Oxfam in October 2021. 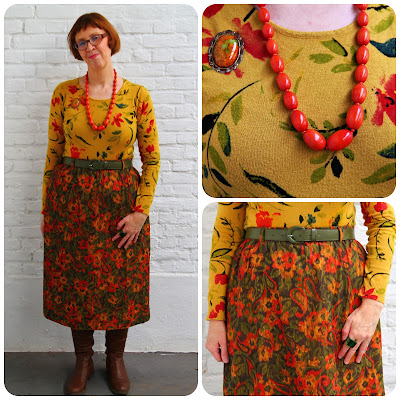 My accessories - olive green belt, orange beaded necklace and orange and green marbled brooch - were a mix of charity shop and flea market finds.
I spent the rest of the afternoon reclining on the sofa, finishing my Sebastian Faulks book and making a start with The Story of England. 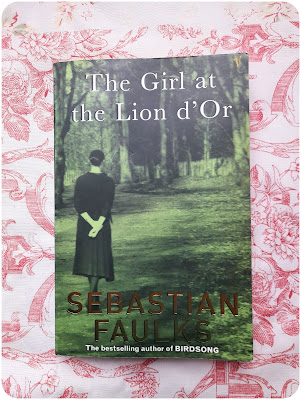 Any trace of lingering sunshine had upped and left on Sunday 27 November, leaving rain and barely 8°C in its wake.
The good news was that the pain in my back was as good as gone. Plus, we had lunch with our friends Inneke and Maurice to look forward to.
That morning, throwing caution to the wind and hoping this wouldn't be too taxing for my back, I dragged out a couple of Winter coats from my groaning coats cupboard. Then I played around with my wardrobe, assembling a selection of outfits for the week ahead. I'm trying to do this every Sunday, as I often lack time and inspiration on weekday evenings. Nothing is set in stone though. 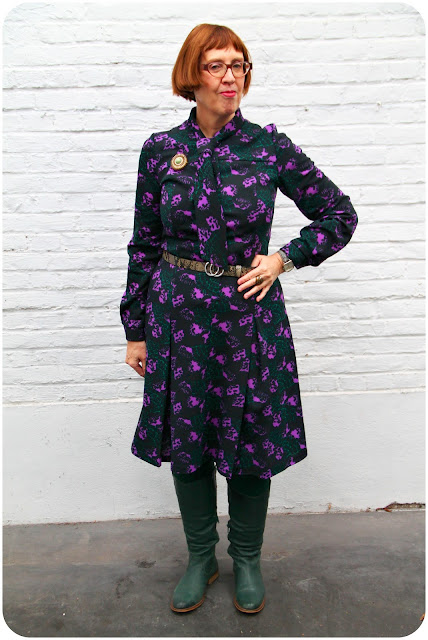 This is what I wore for lunch, an outfit I repeated on Monday, earning a rare compliment from my colleague, who hardly ever comments on what I'm wearing and whose style couldn't be further removed from mine.
My vintage polyester pussy-bow dress, which is from the Finnish Marketta label, was a Think Twice find back in October and had been patiently awaiting a cold snap like this for its first outing.
I picked up the green in its pattern by wearing a pair of green boots which I'm considering one of my best charity shop finds ever. 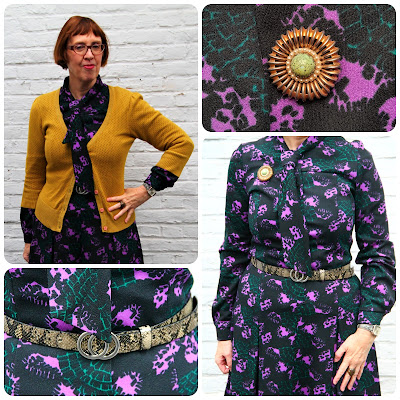 I layered a - charity shopped - mustard Zoë Loveborn cardigan over it for contrast and added a snake print belt at my waist, the latter a cheeky in-between Lockdowns retail buy in 2020. The brooch with its mottled green heart was picked up from a flea market. 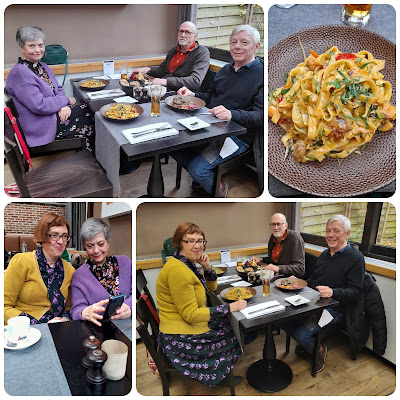 Lunch was had at 't Kasteeltje (transl. Little Castle), a restaurant we have been to before, in the nearby village of Boechout. Its location is a turreted mansion built in 1900 in so-called cottage style, hence the castle moniker. The ongoing rain prevented me from whipping out my camera but here's a photo taken during a previous visit.
I had the most delicious fettuccini, with marinated chicken, spinach, mushrooms and candied tomatoes in a mild curry sauce. Yum!
And look, Inneke and I were wearing complimenting outfits!