Breathe in the air

Although I've been back since Tuesday, there has been no rest for the wicked, as I was already expected back at work on Wednesday. So far, I've only had time to catch up with blogland and upload the hundreds of photos I've taken on our yearly sojourn to Belgium's far west. To let you in on a secret, I haven't even finished unpacking yet!

But first things first, as in order not to disrupt my blog's sequence too much, I'm taking you on a short trip in the time machine, back to August's final Saturday.

Due to circumstances, these were the last outfit photos we managed to take before we headed off on Tuesday the 6th of September. But more about that later. 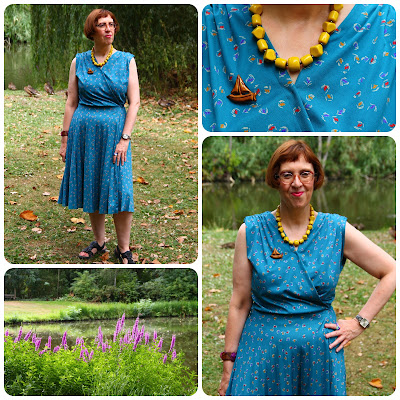 We hadn't been on a proper rummage for the longest time so, after breakfast, we packed a couple of sandwiches, grabbed a drink, and went for a charity shop trawl, starting with the one near the park where the above photos were taken. It was sunny but a bit breezy, which made the 21°C insisted by the thermometer feel a bit too chilly for my sleeveless Diolen wrap dress, recently found at Think Twice. I was glad I'd had the forethought to wear a cardigan and my denim jacket on top, which I both removed to show you the dress in its full glory. 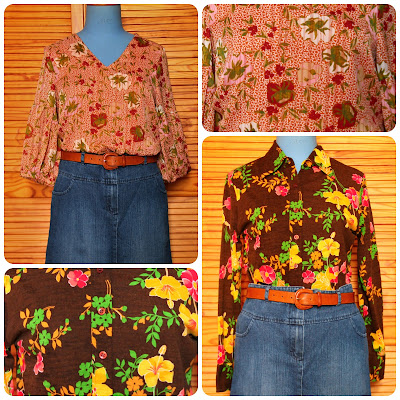 Then, after a short stroll and a picnic on one of the park benches, we continued to our most local charity shop.

The charity shop goddesses must have taken pity on us, as they rewarded us with plenty of finds. These included a floaty floral blouse from the Danish Vero Moda label and a vintage brown floral shirt, both long-sleeved, to be worn once weather shifts into Autumn mode. 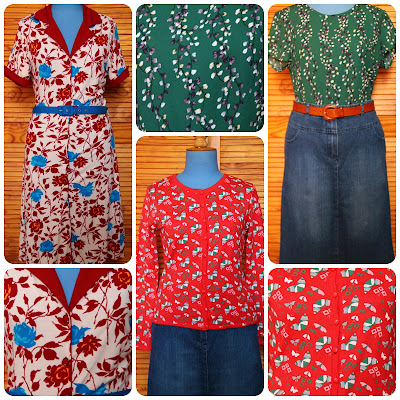 More flowers, in burgundy, turquoise and a tiny bit of orange, for this retro-style King Louie dress, which I already wore to work in the meantime.

The red printed cardigan is from the Belgian Who's That Girl label, while the green top with its garlands of flowers is from Only, which is another Danish label. 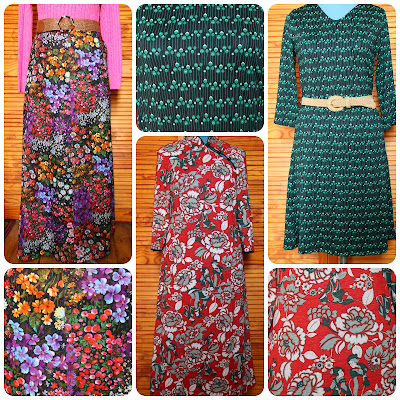 Sustainable Belgian label Froy and Dind provided the bottle green dress on the top right, which I can't wait to wear with a pair of contrasting opaques.

The cheongsam style housedress is deadstock vintage from an underwear and nightwear label called Carine, which I remember being around here in Belgium in the 1960s and 1970s. A quick trawl on the Internet didn't deliver, so unfortunately I can't tell you anything further about its origins.

Add to that the glorious vintage maxi skirt I picked up for a mere € 3,55 at the vintage-per-kilo shop during one of my lunch breaks, and I couldn't have been happier. 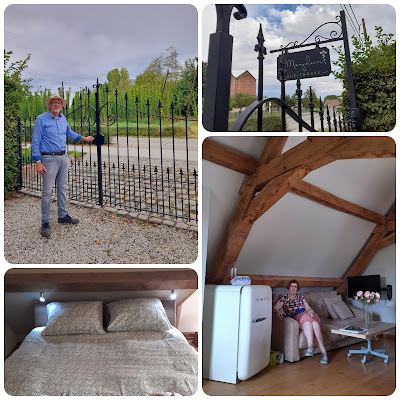 I'm fast-forwarding again to Tuesday the 6th, when we arrived at the cottage which over the last 11 years has become almost like a second home, in the early afternoon.

It was nothing short of a miracle that we'd actually made it there. Just a handful of days before I was due to go on holiday, my one and only colleague sustained a broken wrist which needed surgery. When it transpired that she would be out of action for much longer than expected, it meant that I wouldn't have any coverage for my job during my holiday. Luckily, it all worked out ok  in the end as my lovely boss came over all the way from Miami and, with some guidance from me, took over my job as best as he could while I was away. 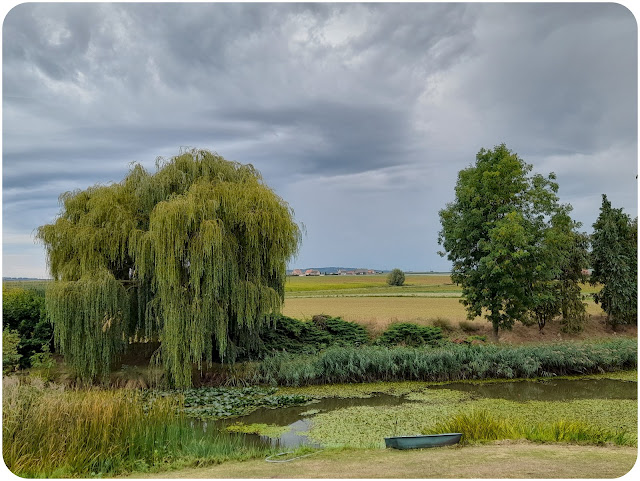 In spite of a sky full of angry looking clouds, it had remained dry so far, and the temperature, which had come down from 30°C to 25 °C after a thunderstorm overnight, was still quite summery.  After a packed lunch of omelette sandwiches made by Jos that morning, and washed down with cups of coffee, we hopped into our car again for the short drive to Poperinge, our nearest town.

It has become a tradition of ours to spend the first day reacquainting ourselves with this quintessential West Flemish town, which strikes the perfect balance between lively and sleepy. 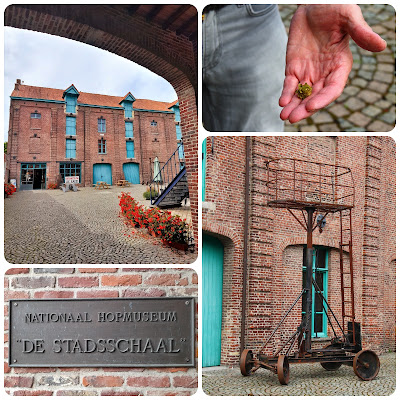 For such a small town Poperinge has its fair share of museums and, being the hop-growing capital of Belgium, it is only fitting that it host the National Hop Museum.
The museum is housed in the beautifully restored old Stadsschaal (Municipal Scales), which is where hops used to be inspected, weighed and pressed until the late 1960s. There's an ancient piece of hop picking equipment displayed in front of the building and the courtyard was strewn with dried hop bells carelessly discarded by museum visitors. 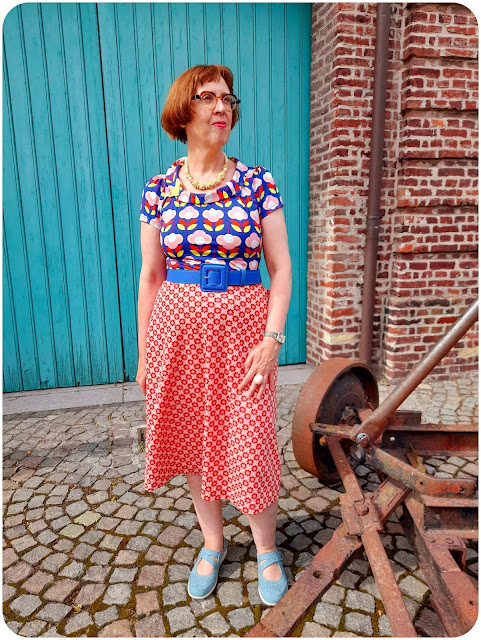 The courtyard was quiet and thus the perfect place to show you what I was wearing. It certainly wasn't the first time I wore this 1970s vintage skirt with this particular top, which was a high street sales bargain a couple of years ago. Surely, the marriage of their naive flower patterns couldn't be more perfect, especially as the pink flowers of the top match the pinkish background of the skirt almost exactly. The belt was picked up in the Mango sales in August and the shoes, which were snapped in the sales earlier this year, are definitely in the running to compete with my Cloudsteppers in terms of comfort. 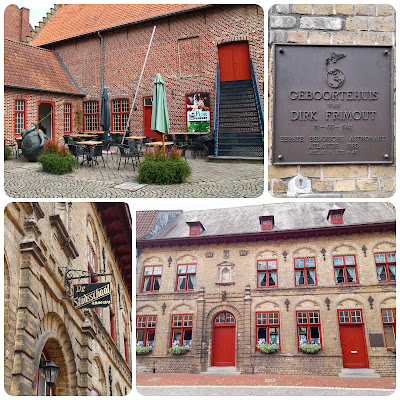 Across the courtyard is the newly opened De Plukker Pub (Hoppickers’ Pub) where home brewed real ales can be sampled. It's at the back of a building, also part of the Stadsschaal complex, which originally belonged to the monastery of the order of the Recolettes.

Here, according to the commemorative plaque at the front, Dirk Frimout was born. If you're wondering who the hell Dirk Frimout is: he was the first Belgian astronaut, flying aboard NASA Space Shuttle mission STS-45 in March 1992. He is the town's most famous son, and even has the local park named after him! 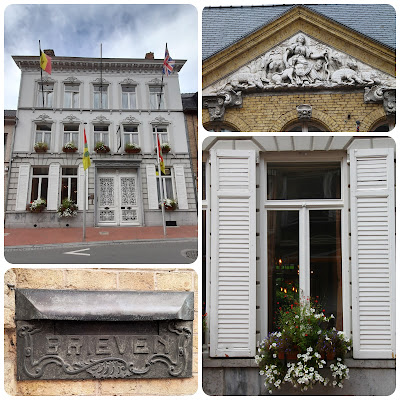 The next building of note we passed on our walk up from the car park is Talbot House, home of the "Everyman's Club", an open house for those serving in the British Army during the Great War, regardless of their rank.  It was opened in 1915 by army chaplains Neville Talbot and Philip "Tubby" Clayton. The house is now a museum and is still run by British wardens. You can even spend the night in one of the guest rooms! 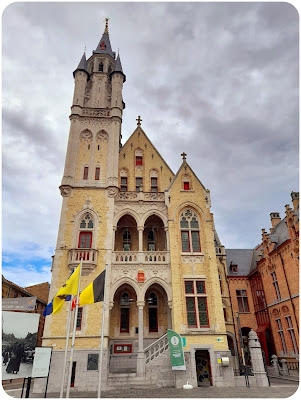 Presently, we arrived at the market square, which is dominated by the stunning town hall. In spite of initial appearances, it was only built in 1911, in neo-Gothic style. The basement houses the town's tourist office, where I went to buy some local walking maps and leaflets. 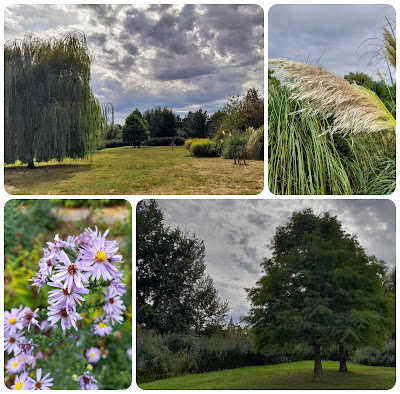 Our first day always ends at the aforementioned local park named after the town's hero, Dirk Frimout.
The elongated park, which covers 3 hectares, is the town's green lung, and was opened in the presence of Viscount Frimout - a title he got when he came back from his space mission - in September 2002. 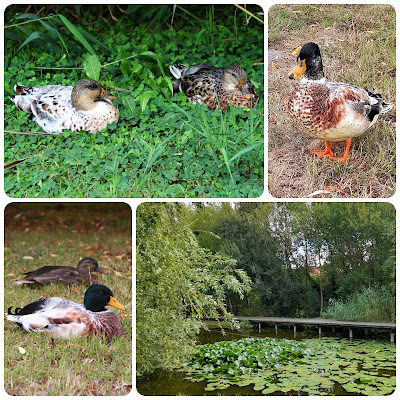 I left Jos sitting on a bench and went exploring, noting that, as expected after the recurrent heatwaves, things weren't as lush and green as usual.
Then I met some of the most approachable ducks I've ever come across. They let me come really close and seemed to be more than willing to have their portraits taken. 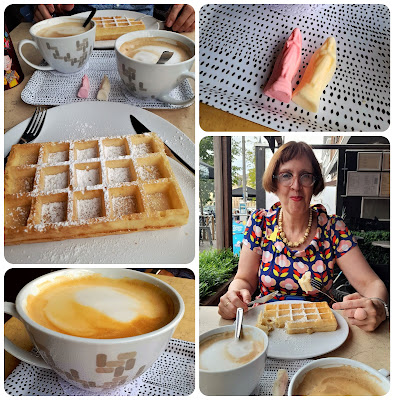 On our way back to the car park we stopped off at one of the cafés lining the market square and indulged in the most delicious waffles and huge cups of cappuccino. It started drizzling while we were sitting on the café's covered terrace but thankfully it was over within minutes, as we hadn't thought to bring umbrellas.
As a treat we were given pieces of typical old-fashioned Flemish candy in the shape of Our Lady. They are made from guimave, which is a kind of marshmallow, and made from sugar, egg-white and gelatine.
Although this candy comes in all shapes and sizes, these particular ones, which are affectionately called Mariatjes (little Marys), have a certain nostalgia factor. I actually hadn't seen or tasted one of these since childhood, when they could be bought individually for pocket money in the corner shop. 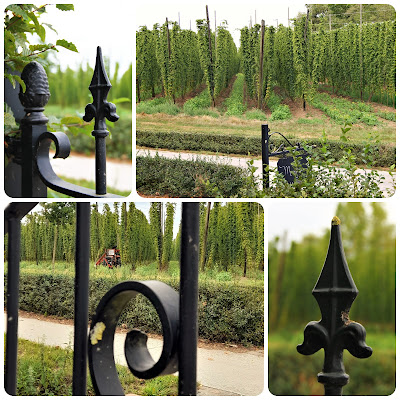 After picking up some groceries to tide us over for a day, we drove back to the cottage.
I was playing around with my camera, taking photographs of the hop field across the road viewed through the cottage's very own wrought iron topped with fleur-de-lis and pineapple finials, when I could hear a low rumbling sound which appeared to come closer and closer.
And there it was, the red hop picking machine, emerging from one of the rows between the hop poles. 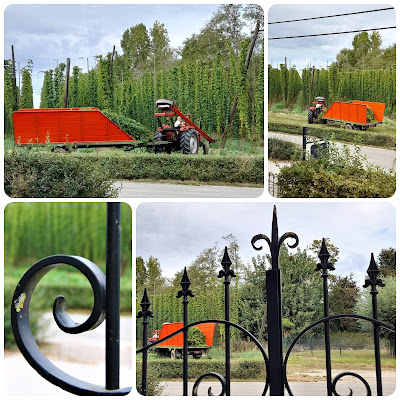 Yes, it was that time of year again when the hops were ready for picking. When we visited a local hop farm last September, we learned that hops are a crop which is regular as clockwork and that, depending on the variety, they are always ready for harvesting within the same time frame of just a couple of days.
Before the evening was over, all the hop bines in front of the cottage had been cut down from their poles, leaving us with quite a different sight.
It started raining in earnest in the evening, and we watched the light show provided by the accompanying thunderstorm over the darkened landscape from our terrace window. A rather spectacular end to our first day!