The night's steady downpour had left puddles on our cottage's terrace and had washed the rain-starved landscape clean.

We were up bright and early and were happy to see the morning sunshine illuminating the tops of the trees and slowly making its descent into the garden. Our weather app insisted that there would be more rain later that day, but for now gossamer wisps of white clouds were floating in a Wedgwood blue sky. 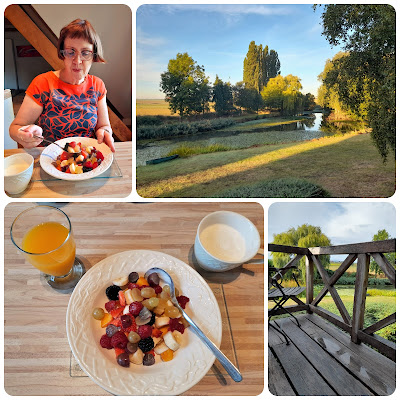 Taking our time to linger over breakfast, our usual menu of fruit and yogurt tickled our taste buds better than ever before, what with the glorious view and the full length and seemingly endless possibilities of our holiday still stretching out before us.
For our first day, we opted not to stray too far from the cottage, selecting one of the walks I'd picked up in the tourist office, its starting point a mere 10 minute drive away. So, armed with picnic and walking map, we were ready to go.
Our walk of choice was the 6,5 kilometer Galgebossen walking route, which starts from a car park at the edge of the woods. The word bos (plural bossen) means wood(s) in Flemish, while the Galge part translates as gallows. Indeed, until the early 18th century, when it were the lords of nearby Vlamertinge who decided on life and death of their subjects, executions were carried out at the edge of these woods. 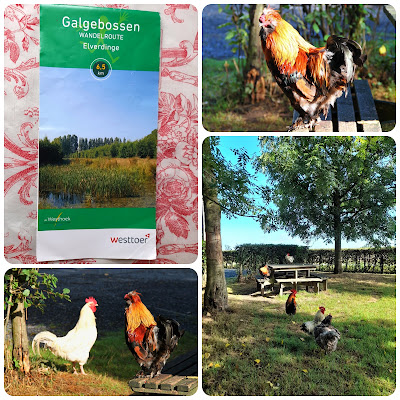 While we were trying to get our bearings and find the first of the hexagonal signs indicating the walk, we were met by a gang of chickens We presume these belong to the adjacent restaurant De Vuile Seule, which in the delightful local dialect means the The Dirty Bucket. No chance of a meal or even a cup of coffee, as it's only open from Friday to Sunday, so sadly enough I cannot report on the cleanliness of the place.
As for the chickens, we have met them before, when we came here for a short walk back in September 2019, at which time they insisted on sharing our picnic! 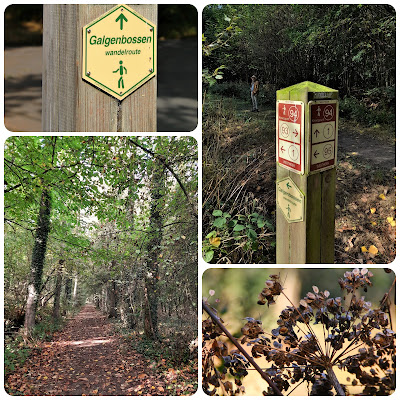 We soon spotted the first of the signs, which we followed walking on a succession of woodland paths meandering through a variety of young and old deciduous forest.  Nature is allowed to take its course here and dead wood is left lying around, creating the perfect habitat for a plethora of creepy crawlies. 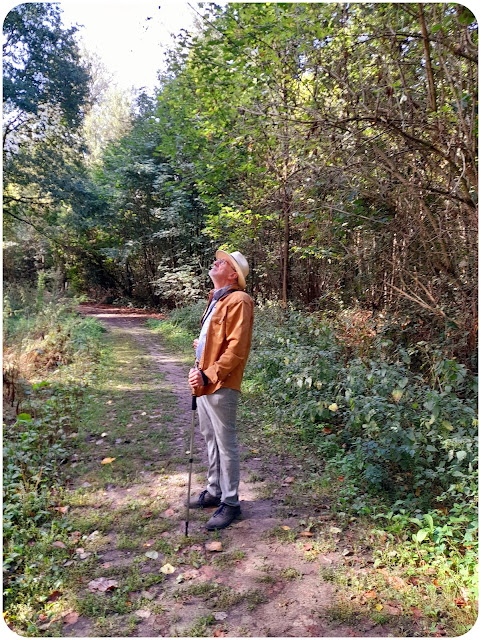 There's no denying there was more than just a hint of Autumn in the air, and it all smelled heavenly after the previous night's rain. One could almost literally hear the parched soil's sighs of pleasure as it distributed rations of moisture among the trees and vegetation.
An extended forest bathing session was just the ticket after all the stress of the past couple of months and the temperature, which were nudging the mid-twenties, couldn't have been more perfect for this bracing walk. 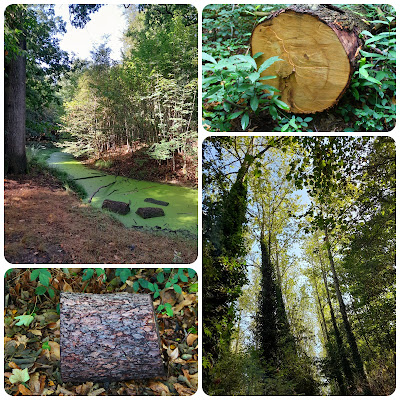 Just minutes into our walk we came across a motte-and-bailey surrounded by a moat (above, top left), which is thought to be the relic of a medieval farmstead that was located here near the Roman road from Cassel (now in France) to Bruges.
We emerged from the woods into a clearing and passed a textbook example of a dew pond ringed by ancient pollarded willows. After the drought of the Summer months, however, only a tiny bit of water was left on the bottom of the pond. I can only hope that the persistent rains of the last week or so have been able to replenish it in the meantime. 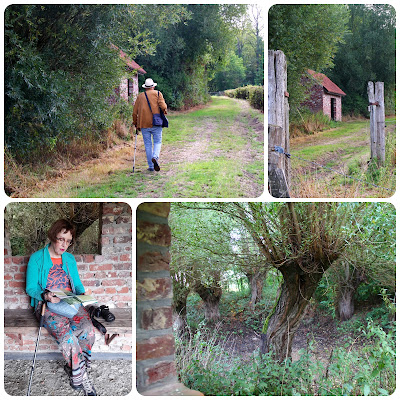 The little brick barn turned shelter next to the pond is all that is left of a former farmstead, its old meadow now incorporated into the domain and kept as grassland. We briefly stopped here to get our bearings and read up on the fascinating snippets of history of the area mentioned in our walking leaflet.
The woods, now comprising 107 hectares, are a remnant of a much larger forest which disappeared between the 9th and 14th centuries. 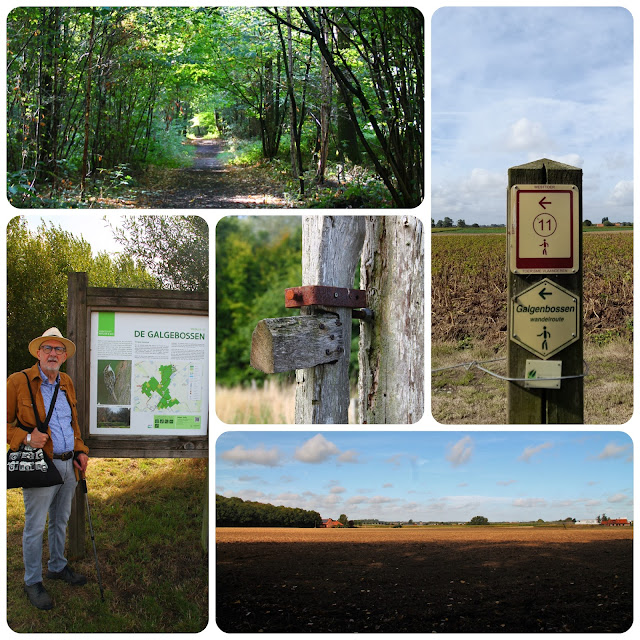 The walk continued through stretches of wood punctuated by meadows and fields offering flat as a pancake panoramas, empty but for a scattering of farms on the horizon.
At one time, we joined the infamous Plankenroute (Plank Road), which connected the woods with the centre of nearby Vlamertinge. It was along this road, which was paved with planks due to its muddy surface, that soldiers marched to the Yser Front during the Great War. 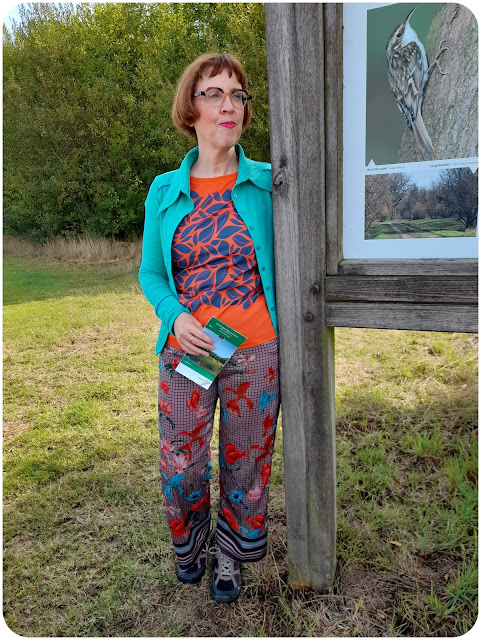 I was wearing the charity shopped Zara trousers which sparked my embracing trousers again after many years of wearing only dresses and skirts. The leaf-strewn orange T-shirt and Wow To Go shirt worn as a jacket were charity shop finds as well. 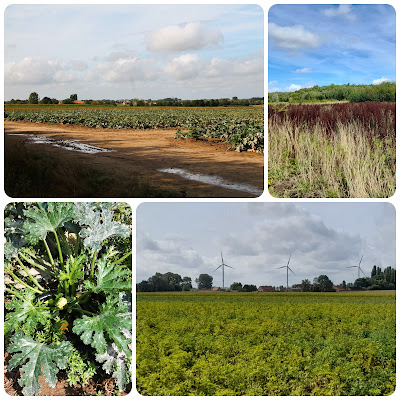 Poperinge's skyline could be glimpsed across a field of courgettes, although only one of its church spires was visible, the others hiding behind a line of trees. I guess it would be a totally different story once the trees have shed their leaves. The windmills standing sentinel along the ring road seemed to be waving at us at every turn. 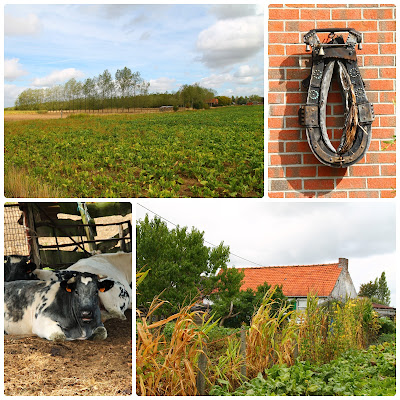 We were starting to get peckish but the walk, which until now had been on woodland paths and through meadows and fields, suddenly continued along a tarmacked road. As we were leaving the woods well and truly behind for now, we knew the chances of finding a bench anywhere soon were getting dim.
A handful of houses dotted the single track road and, at a street corner, one of Poperinge's multitude of roadside chapels awaited. An elderly man pushing a wheelbarrow eyed us suspiciously as we were peering through the chapel's barred window trying to get a glimpse of its interior.
He started getting even more suspicious when I was taking photos of the delightfully shabby farmhouse (above, bottom right) and its picturesque crop of pumpkins (below, top right). Not surprisingly perhaps, as this turned out to be his home. 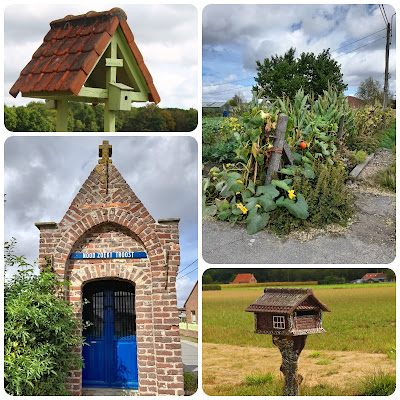 With still no benches in sight and our hunger pangs getting worse by the minute, we were glad of the opportunities offered by the Cross of Sacrifice at the entrance of Hagle Dump Cemetery.
The cemetery, which was begun in April 1918 during the Battles of Lys, was named after a nearby stores dump and contains 437 Commonwealth graves, a staggering 139 of which are unidentified.
Jos was looking suitably mournful as he sat munching his sandwiches, but I'm sure the fallen heroes who found their final resting place here wouldn't have begrudged us our lunch.
After raising our cups to them, we said our goodbyes, and continued our walk. 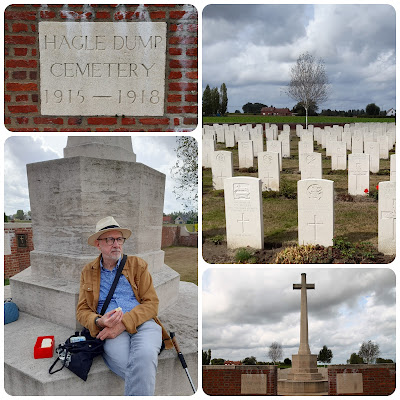 We rejoined the woods shortly after leaving the cemetery, and of course, the first thing we came across  when we turned onto the woodland path was a bench!
At a crossroads, the woodland path continued straight ahead until we passed a 19th century gamekeeper's house (below, bottom left) with a tiny chapel devoted to Our Lady of St. Jan, fixed to its façade. Our Lady of St. Jan is connected to the eponymous church in Poperinge, which is a well-known place of pilgrimage. Legend has it that she brought a stillborn child back to life in 1479. 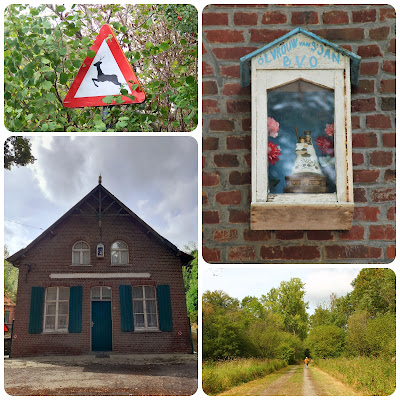 During the Great War, the gamekeeper's house was used as an inn called De Gaai (The Jay) where soldiers came for entertainment, drink and women and to buy fresh bread from its bakehouse.
The woods remained British territory throughout, and formed a last place of rest before the troops continued on the way to hell. The British named it "Dirty Bucket Camp", referring to inn De Vuile Zeule, which I mentioned at the start of our walk. 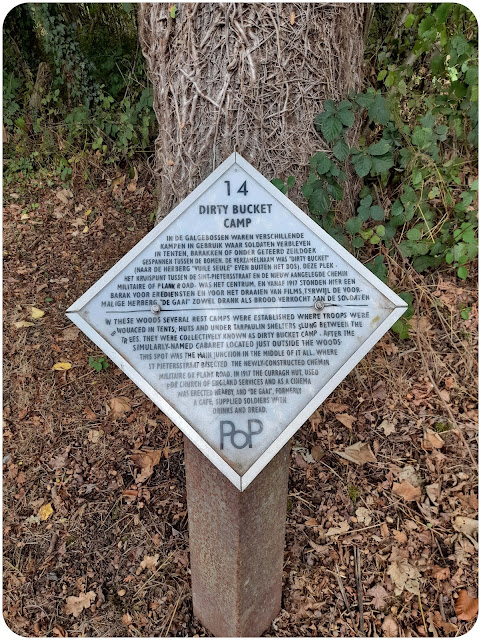 We were near the end of our walk by now, and were glad to give our feet a rest. Secretly, we were quite chuffed to have finished the walk without any hiccups, although I'm fully aware that this was probably due to the excellent way-marking rather than to our aptitude.
Before returning to the cottage, we stopped at the local supermarket for provisions. This was an adventure in itself as, due to renovation works, which seem to be following us around, half of the shelves were empty. 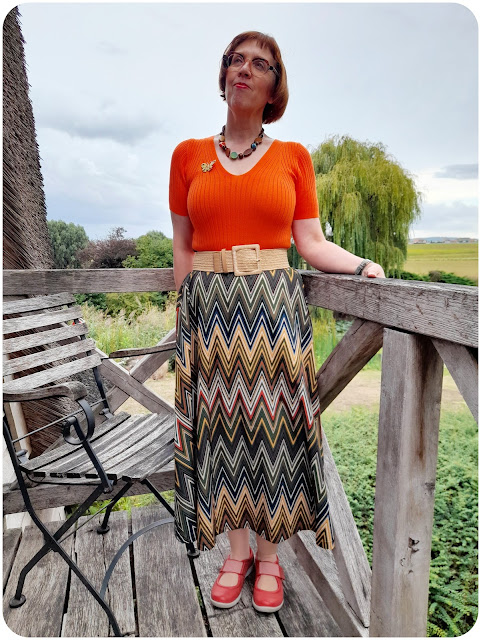 Back at the cottage, we read and napped until it was time for dinner, which we'd booked at restaurant, De Strooyen Hen (The Straw Hen), a couple of minutes up the road.
For this, I changed into the zig-zag skirt I charity shopped in the Summer of 2021 and a sales bargain orange short-sleeved jumper, accessorized with one of my stretchy belts, a butterfly brooch and a multi-coloured wood and ceramic necklace. I didn't bring any fancy shoes, so my Cloudsteppers would have to do. 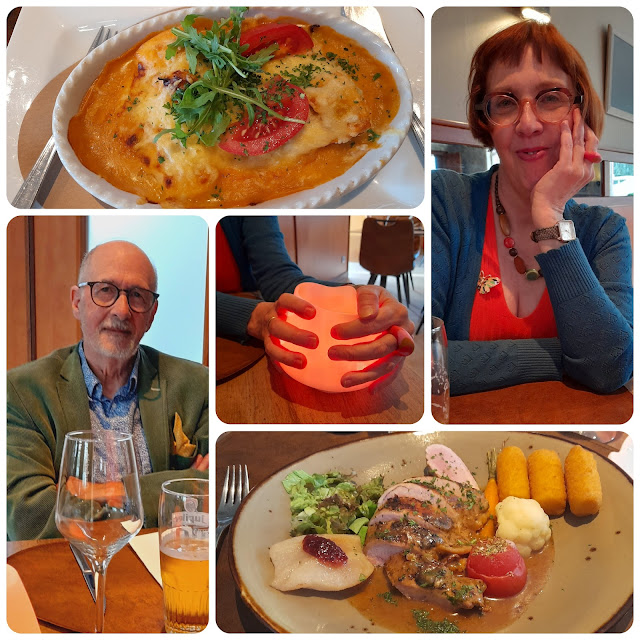 While I was taking photos of our meals (mine was fish gratin, while Jos opted for pork tenderloin), a message appeared on my phone to welcome us to France.  Although we were still in Belgium, the restaurant is only just over 3 kilometers from border town Watou ...
And if you're wondering what's going on in the centre photo, I was having fun with the squishy battery operated LED lamp thingy on our table. As one does.
I'll be back with further west country adventures in a couple of days and hope you'll join me again then.