After the funny sort of Summer we've had, September's glorious weather was nothing short of a blessing. Thus, it was quite a shock to the system when, almost like a bolt from the blue, Autumn had turned wet and windy by the time October rolled along. So much for mellow fruitfulness, while the mist was of the kind that follows in the wake of non-stop rain.

But I'm being hasty again, as here I am on Sunday the 19th of September, enjoying another Indian Summer's day, with the mercury indicating a balmy 23°C. 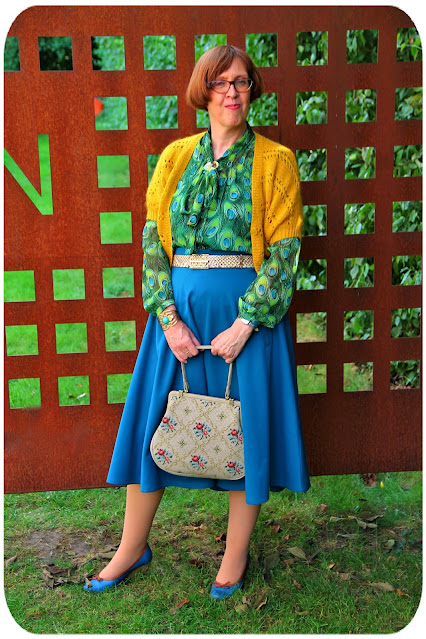 There wasn't much need for my mustard cropped, short-batwing-sleeved cardigan - would it be correct to call it a shrug, I wonder - and indeed I was carrying it over my arm and almost lost it if it weren't for a nice guy winding down his car window to tell me I'd dropped it, complimenting us both on our attire in the process.
We were on our way to our car as we were having a lunch date with our friends Inneke and Maurice to mark the occasion of both mine and Inneke's birthdays. We are the same age, and have known each other since secondary school, reconnecting via Facebook after 30-odd years in 2009. 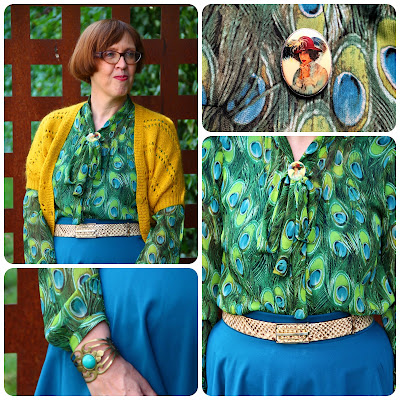 Until that very morning, I hadn't put much thought into what I was going to wear. If I'd had anything in mind at all, it would have been a maxi dress or skirt.
Rummaging through my shelf of blouses, this gauzy peacock feather patterned and pussy-bowed one all but leapt out at me, so who was I to deny it my outfit's starring role. It's from the Libelle Collection, produced for the eponymous Dutch and Flemish women's magazine, and picked up from a flea market stall for all of € 1! I secured its pussy-bow, as I'm wont to do, with a vintage scarf clip. 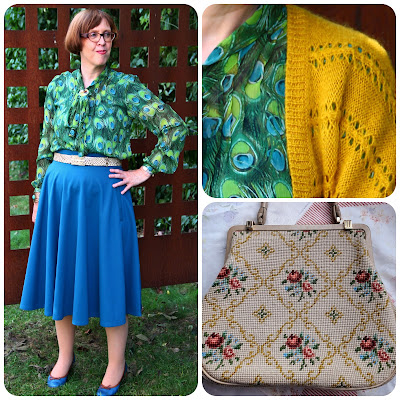 Same as the mustard cardigan, the wide blue midi skirt I picked as the blouse's companion is H&M by way of the charity shops. My blue wedge shoes adorned with tiny tan bows were charity shopped as well, as was the by now familiar copper and turquoise cuff.
My vintage snakeskin belt - nothing faux about that one - was a flea market find, and I bought the tapestry bag during last year's Think Twice birthday trawl. 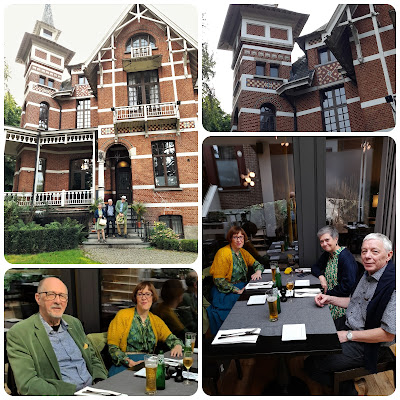 Our restaurant of choice was 't Kasteeltje (transl. as little castle), a mansion built in 1900 in so-called cottage style, in the nearby village of Boechout. It is somewhat reminiscent of its contemporary, Chalet Schabaillie, which we visited when in Poperinge.
The food was delicious - I had vol-au-vent, a Belgian classic - and a lovely time was had by all. On top of that, we had the most entertaining waiter, a guy called Dovy, who made us guess his country of origin by dropping little hints each time he passed our table, telling us only a handful of people had got it right so far. We soon guessed - correctly - that it was Israel! 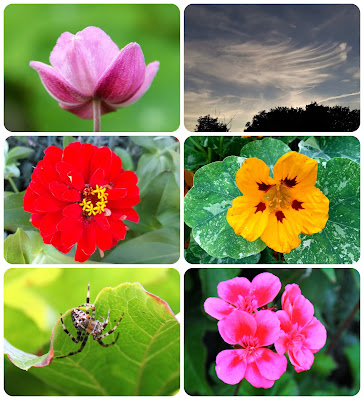 Back at home, what was left of the patio plants were in urgent need of a drop of water.
As Maurice had noticed that the construction site across the road had stopped pumping up groundwater while we were on holiday, we tentatively gave our hand pump a try and were overjoyed to find we were once again able to draw well water to quench our garden's thirst. Huzzah!
It was back to business as usual on Monday, even a three-day weekend being over in the blink of an eye. With the weather still on its best behaviour, treating us to lots of sunshine and a temperature which kept hovering in the low twenties, I ventured a bit further afield during my lunch breaks. I indulged in a spot of shopping too, even if there was nothing which tickled my fancy at Think Twice and the vintage per kilo shop. 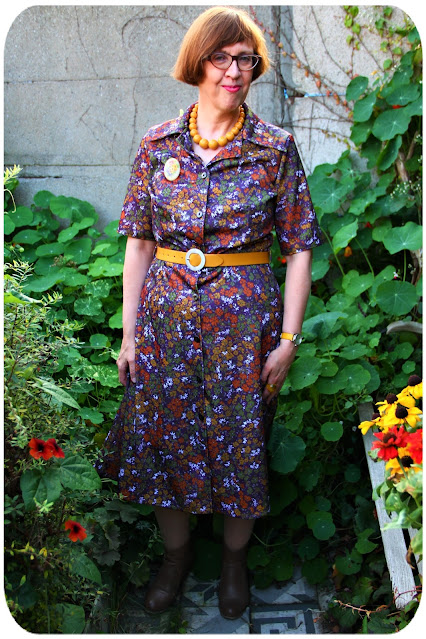 As for outfit photos, I'm skipping a couple of days to Wednesday, when we finally found the time and energy to take some after work.
Ideally, my hair would have been freshly cut and coloured, courtesy of a hairdresser's appointment during lunch break. Alas, it turned out I'd got the time wrong, arriving at the salon an hour late. Michel, my hairdresser, had been quite worried as not only I'd never been late in the 26 years I've been going to the salon, for some reason he hadn't been able to reach me by phone ... While he was relieved to see me turn up after all, there was nothing for it but to reschedule to the next week! 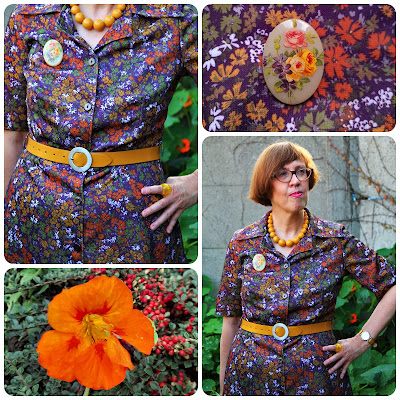 There's more than just a hint of Autumn in the colours of this button-through Diolen dress I bought in a vintage shop in December 2017. Therefore it will come as no surprise that I mostly find myself reaching for it this time of year, although I've been known to wear it in April as well.
It came with its own self-fabric tie belt, which I usually replace by a belt in one of the colours of the dress's flower pattern. More often than not, it'll be yellow, which here I used not only for the belt, but for the beaded necklace and perspex ring as well. I'm even wearing a watch with a yellow strap.
My brooch, an old flea market find, echoes all the colours in my dress! How is that for matchy-matchiness? 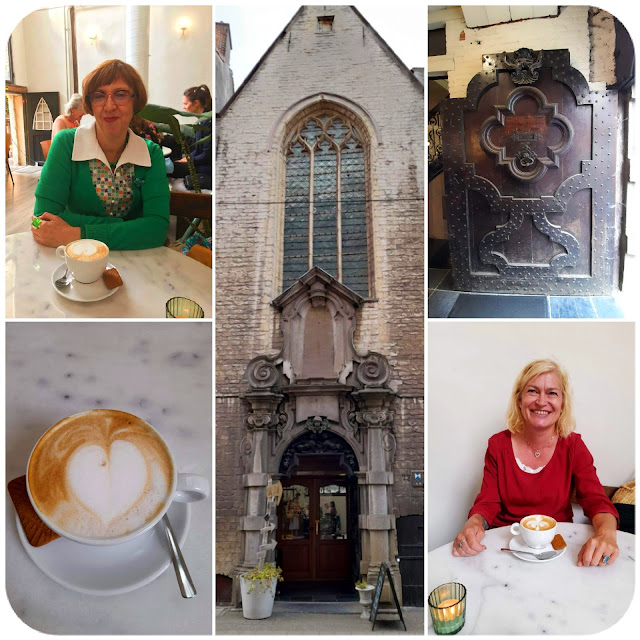 On Thursday, my final office day of the week, my lunch break was spent having coffee and a mammoth catch-up with my friend Inez. We used to do this almost every week pre-Covid, but this was the first time we picked up where we left off about 18 months ago!
As our previous haunts have closed down, we looked for pastures new, which we found at Maurice, a cozy coffee bar located in a 15th Century chapel. 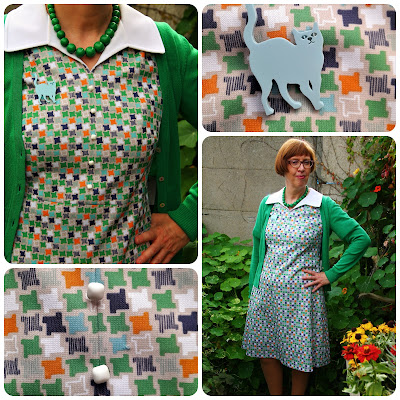 The dress I was wearing was plucked from a rail of deadstock Diolen I came across at an outdoor flea market in May 2018.
It has a rather unwieldy tie belt in the same fabric as the dress's colour and cuffs. As I didn't like the latter at all, I tried replacing it with a green fabric belt belonging to another dress, only to end up ditching it at the office and spending the rest of the day wearing the dress belt-less. Although this did make me feel slightly better, I still wasn't happy with it, which was only confirmed when I saw the outfit photos we made that evening. 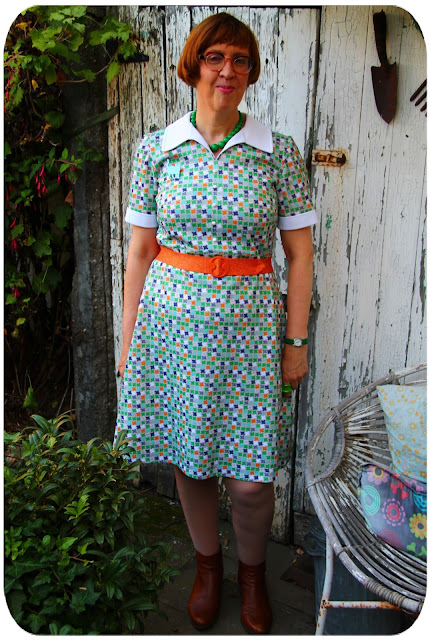 I tried it again with an orange fabric belt on Friday, but that still didn't convince me either so, after chucking it into the washing machine and rejoining it with its original belt, it has now been relegated to the flea market pile. Don't get me wrong: I love the dress - that print is absolutely delightful - but not on me.

As it was Friday, we went for a charity shop rummage as usual, although our choice of shops was limited, the direction we were driving in dictated by the UCI World Championships 2021 which were passing through our village for three days running. 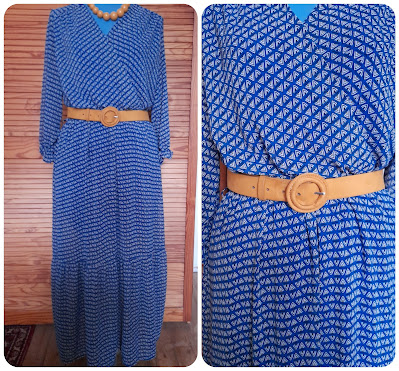 My treasures that day included this floaty blue maxi dress and a maxi skirt with a ditsy purple, green and white floral pattern, both of which are proudly showcased by the always obliging Angelica.
I already wore the skirt myself in the meantime, but that'll be for a next post. 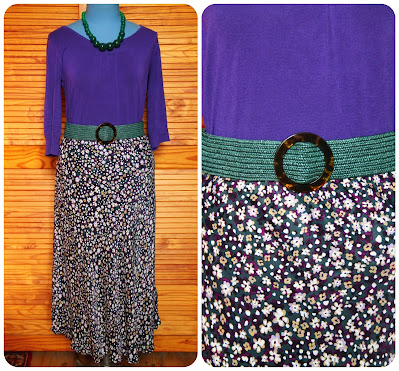 The jewellery display came up trumps again as well, with a longline necklace featuring cream heart-shaped beads and a multi-strand pink and magenta one. 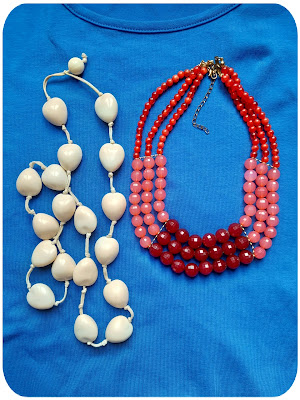 These red Rieker shoes with elastic straps and jelly-like red and pink heels look virtually unworn and turned out to be extremely comfortable. They've got just the right height of heel for me too. 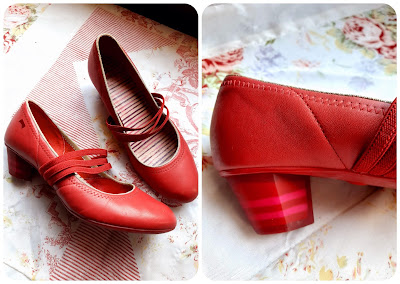 I couldn't wait to wear them, so that's what I did on Saturday.
It was a day of pottering and running an errand or two, visiting grandson Cas and his parents, and marvelling at how much he'd changed since we last saw him back in August. 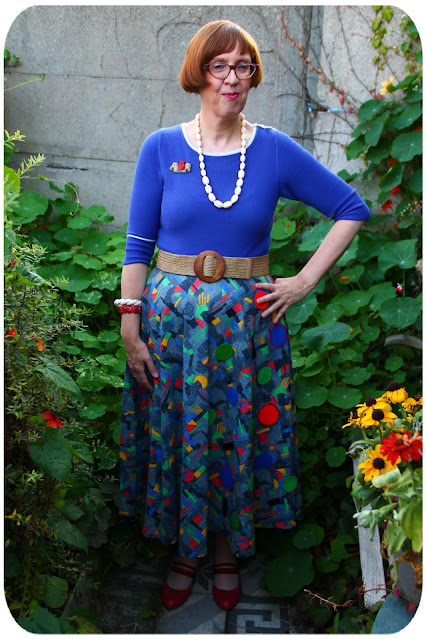 I played around with my wardrobe, trying to wear as many items of my Summer wardrobe before the big changeover.
This midi-length circle skirt was charity shopped in December 2019, and is something of an oddity. Although there is a label, I suspect it is a personalized one, and the skirt is somebody's handiwork. Apart from its mid-century style print, it has a visible red side zipper and features random felt circles and visible stitching, strangely enough on the front left side only. 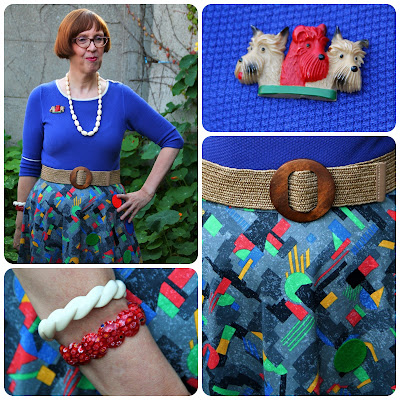 The blue three-quarter sleeved top was charity shopped as well, and is from the same label as the peacock feather patterned blouse I wore at the beginning of this post. To tie in with the cream edging and shoulder buttons, I wore a cream beaded necklace and barley twist bangle, both of which are vintage.
The vintage celluloid brooch featuring three Scotties in its turn ties in with the mid-century theme of the skirt. The millefiori bracelet and the belt - the latest stretchy one to join my collection - were both bought on the high street. 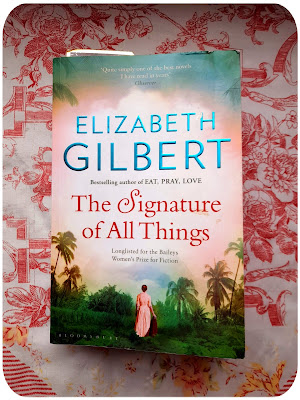 Finally, in other news, it has been a while since I shared my reading matter.
I've started this epic 592-page novel during our holiday, and I'm only just now into its final pages.
It's not that I haven't been enjoying it - although it does go on a bit - but I only seem to find time for reading in bed lately, again often falling asleep mid-sentence after only a couple of pages!
I'll be rounding off September in my next post, for which I hope you'll join me again. Until next time, please do take care!