After Friday's and Saturday's outdoor pursuits, we were ready for a day spent at home on Sunday the 10th of October. The weather forecast being inconclusive as to whether there'd be rain or shine, we made no other plans than indulging in some pottering (me) and lazing around (Jos and Bess).

In fact, I was quite productive in spite of the siren call of the sofa! Not only did I crack on with the seemingly never-ending wardrobe changeover, swapping my Summer skirts for Autumnal ones, I did some minor repairs as well, and even engaged in that seldom seen activity at Dove Cottage, giving some wrinkled items of clothing a once-over with the iron! 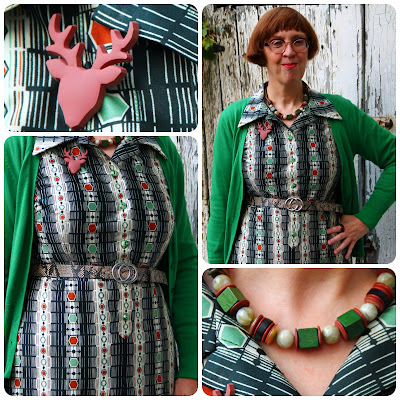 Meanwhile, after another foggy start, we were treated to some sunny spells, which we made the most of by taking outfit photos.
It was love a first glance for this dress, which I spotted at Think Twice in October 2019 when, out of the corner of my eye, I noticed the shop assistant put in on the rails. I made a beeline for it and, without even looking at its size, hurried to the fitting rooms to try it on. Two years on, and I'm still in love with its funky black and white pattern and rows of orange and green hexagons  Doesn't my recently charity shopped necklace match it brilliantly? 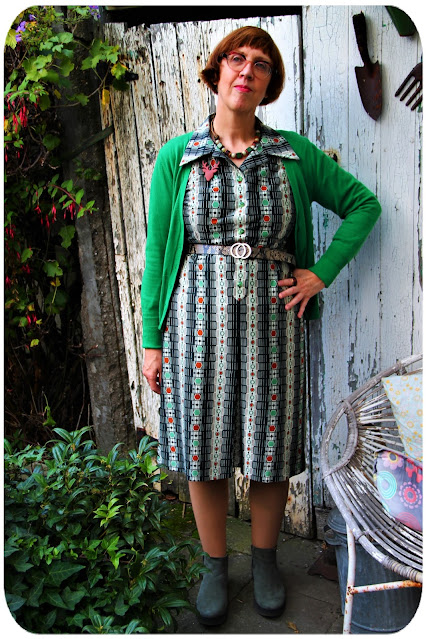 Other accessories included my snake print belt (cheeky retail buy) and my moose brooch. The latter was a charity shop find, as were the green cardigan and my Mephisto ankle boots, which turned out to be the epitome of comfort, even if I only wore them briefly that day. 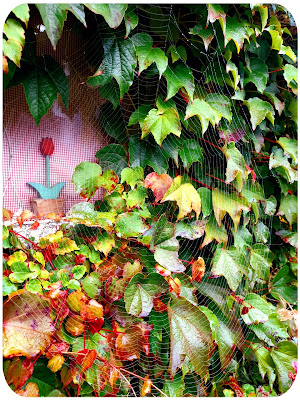 'Tis the season of the spider and the garden is draped with their cleverly disguised webs.
You have to admire the tenacity of some of these eight-legged creatures, having to rebuild their exquisitely executed death traps again and again as I inadvertently cause damage by walking into them. But then again, they're often not the brightest sparks in the box suspending them across the garden path in the first place! 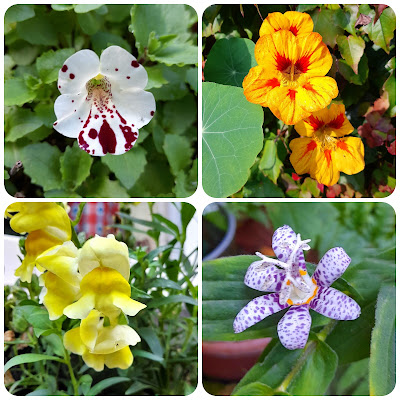 The indestructible Nasturtiums aside, you've got to admire the tenacity of some of our other plants as well, as against all odds they keep on producing bloom after bloom. I'm the first to admit they've been somewhat neglected lately. In the wake of our September holiday, both the Mimulus and the Snapdragons (top and bottom left respectively) were found to be barely alive upon our return, but seem to have benefited from a drastic haircut. Even last year's Toad Lily was kind enough to regale us with the odd speckled flower! 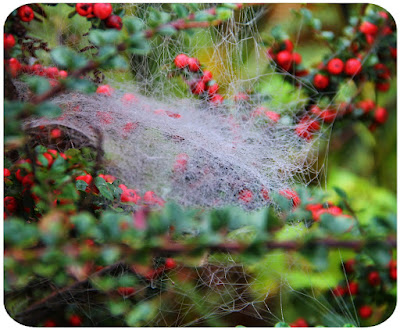 The Cotoneaster bush is draped with candyfloss cobwebs which sparkle with dew drops on misty mornings. The red berries are a treat for visiting blackbirds, which unfortunately have become a rare sight in the last couple of  years. Apparently, their numbers have been decimated by a deadly virus ...
No social distancing, mask mandates or vaccines for the likes of them! 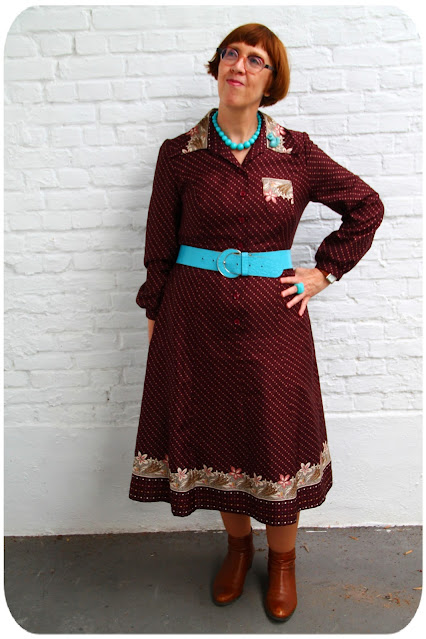 Monday was the start of another run of the mill working week, busy office days alternating with quiet ones which I thankfully made use of to catch up with things.
For some reason, my pre-Covid get-up-and-go is still missing in action and I've got a niggling feeling that it might have gotten irrevocably lost. I'm so glad of my 4-day working weeks, which I'll be able to stretch until the end of the year at the very least, but sometimes even getting through those 4 days can be a bit of a struggle.
The seemingly never-ending string of grey and rainy days, with the odd sunny spell thrown in for good measure, haven't been exactly helpful either, even if the 14 to 16°C indicated by the mercury wasn't all too bad for this time of year. 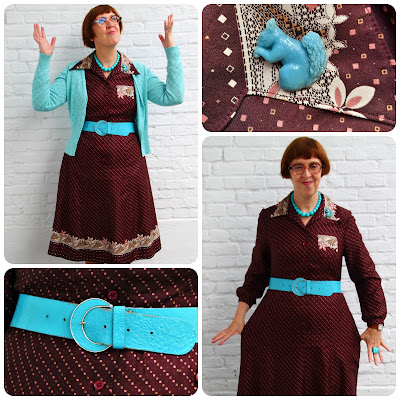 Thankful for the ray of sunshine making its way through our garage's skylight, we made use of its white painted brick wall for taking outfit photos one day after work. Soon it'll be too dark and it'll be quits to after-work photo sessions until Spring.
My burgundy Merry Finn dress came out to play! Featuring tiny pink squares and a pink and off-white floral border at the collar, hem and breast pocket, it is fully lined and I always forget it has side pockets as well.
I used oodles of turquoise for my cardigan and accessories, which included the cutest of squirrel brooches. 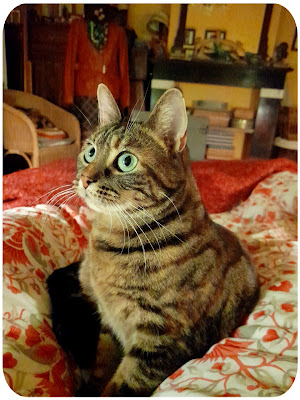 Talking of cuteness, if dressing up is one of the bright spots of my days, coming home to the cutest of furry creatures definitely is another. She's been living with us for almost eight months now and it never ceases to amaze us how she's grown from a scared scrap of a thing into this confident, playful and affectionate feline. She's got us wrapped around her cuddly little paws, that's for certain! 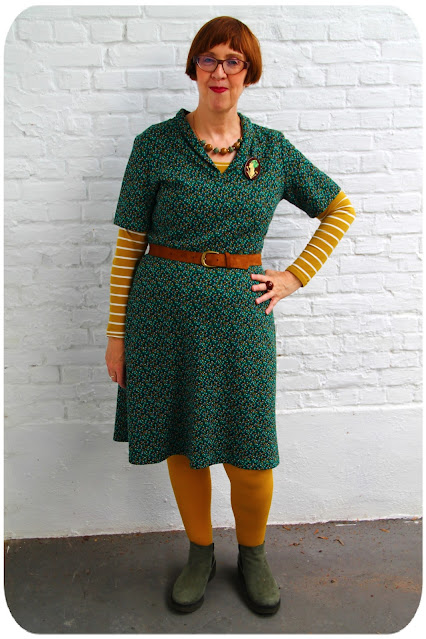 Just like every cloud has got its silver lining, every working week is followed by a gold-framed weekend, which in my case already starts on Friday. We had lots of lovely things to look forward to in this particular one, too much, in fact, to be covered in this post.

Let's begin at the beginning! Friday the 15th of October started granite-skied and rainy, with a distinct lack of sunshine until mid-afternoon. 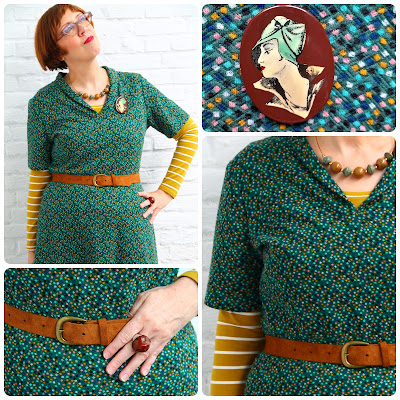 Its moderate 15°C allowed me to wear another one of my short-sleeved knit dresses, this one in a gorgeous bottle green sprinkled with hundreds-and-thousands in a multitude of colours.
I provided my own sunshine by layering my recently charity shopped yellow Breton top underneath, its colour matched by my opaques. I'd quite forgotten the existence of this caramel coloured suede belt which had been hiding at the bottom of a box. The green and caramel beaded necklace was another charity shop find, while my faceted chocolate brown ring was an old retail buy. The brooch with its green-turbaned lady was picked up from our beloved indoor flea market. 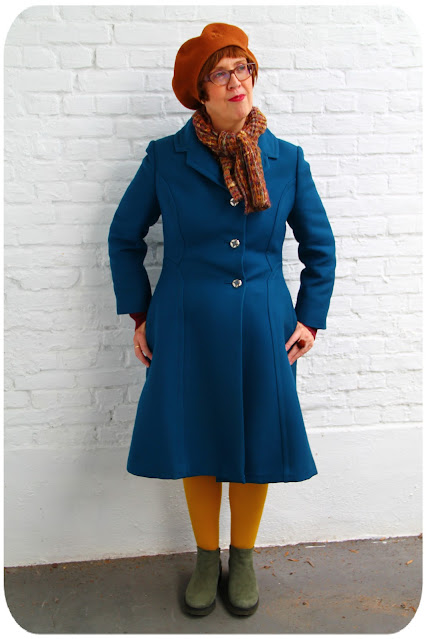 First wearing outside the house for my green Mephisto boots, which felt like I was walking on air!
The teal new wool vintage coat is one of my favourites, as are my caramel hued scarf and beret. All items have been featured here many times before.
One of October's delights is the yearly Day of the Charity Shops here in Belgium. Basically, this means the shops are selling all their hoarded vintage stuff, or indeed anything with a bit of a retro look, usually at seriously inflated prices. Nevertheless, there are still bargains to be had, so it's always worth having a look. 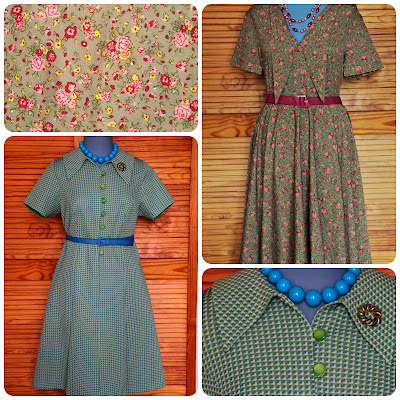 This year, in order to spread the inevitable crowds, it was a three-day event, running from Thursday to Saturday, so we bit the bullet and went for a rummage on Friday.
The rail of vintage clothing was rather meagre, but I still managed to find a couple of treasures.
The green and blue checked dress - bottom left and right - is a polyester knit, and might make a layered-up appearance before it goes into hibernation until next Spring. The sage green rose patterned one with its long pointy collar is from a retro label and with its lightweight fabric is expected to make its debut next Summer. 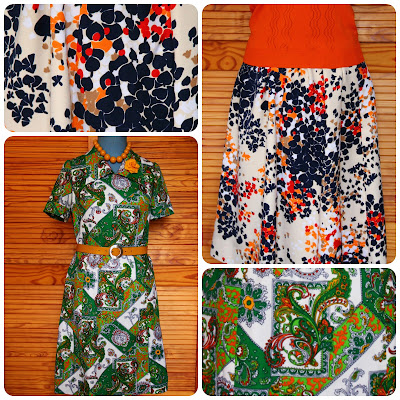 I fell hard for the funky pattern of this green, orange and white Crimplene dress and the cream based skirt with its navy, red and orange leaf-like pattern, both of which are label-less and probably some clever girl's handiwork back in the day.

I gasped when I laid eyes on this red Betty Barclay maxi dress with its blue, yellow and off-white flower pattern. How fabulous are those wide cuffs closing with a row of four self-fabric buttons? 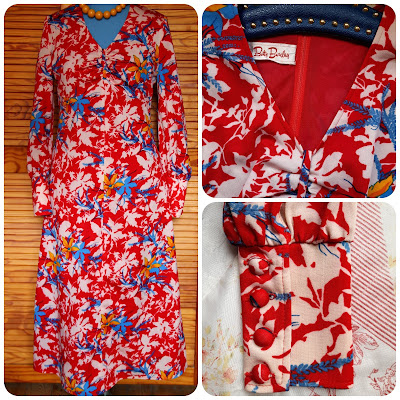 The blue faux leather studded clothes hanger came home with me too. I've already got its yellow, red and green sisters, and although they are not being used in my wardrobe, they are just perfect for displaying and photographing my latest finds on Angelica's days off! 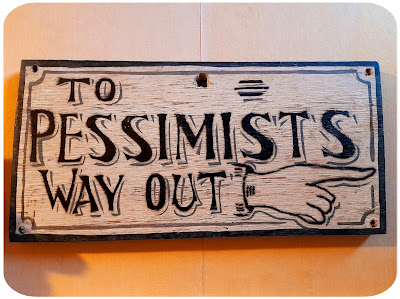 We're in a bit of a pickle here in Belgium at the moment as we are supposedly heading towards a 4th wave of infections. It's hard not to be down in the dumps about it all, but then I'm thinking of this sign displayed in Talbot House's entrance hall, a replica of which is now on display here at Dove Cottage.

If those doomed WWI soldiers could find a ray of optimism, then I'll damn well find one too!

In my Autumn garden I was fain
To mourn among my scattered roses;
Alas for that last rosebud which uncloses
To Autumn's languid sun and rain
When all the world is on the wane!