Any way the wind blows

What a difference a day makes!  If on Christmas Day, a bright blue sky and dazzling sunshine had provided balm for body and soul, Boxing Day's weather plunged us back into the bleak mid-winter.

There was no change in temperature, the thermometer still stuck at around 5°C, but the absence of the sun and the overnight appearance of a blustery wind made it feel decidedly colder. The wind would steadily increase in force over the day as it was gearing up for stormy weather.

We kept a close eye on the weather forecast as Storm Bella was expected to sweep over Belgium on Sunday, but as it looked set to remain dry until the early evening on Saturday, we thought we'd better get out of the house and go for another walk while it lasted. 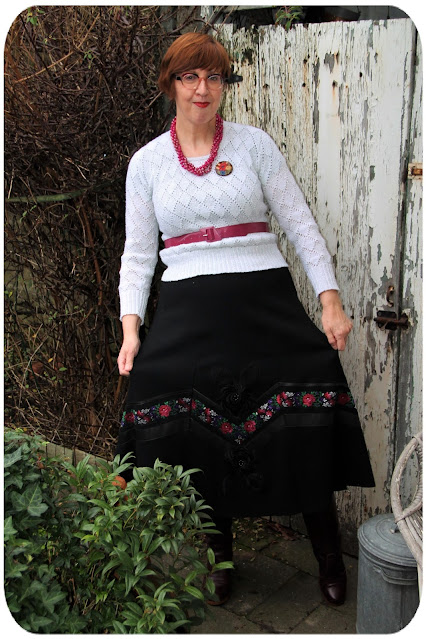 The chill in the air called for the wearing of a jumper and, as we were still in festive mode, I dug out this vintage diamond knit white acrylic one, which is enhanced with a bit of sparkle. It was a charity shop find back in December 2019.

You won't often find me wearing black and white, but I did that day. I thought this black heavy-weight crepey wool skirt - vintage, made in Germany and picked up at Think Twice in February 2018 - would be the jumper's ideal companion. 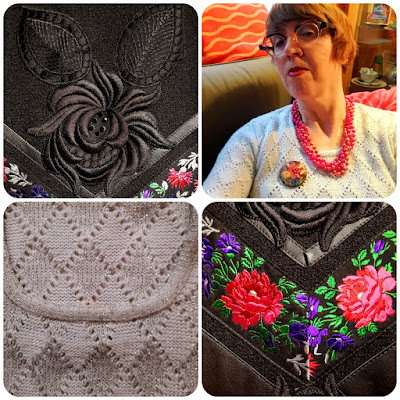 Unfortunately, as it was quite a dark day, it was a nightmare to properly catch it on camera. Therefore, I  included some close-ups so that its fabulousness can be fully grasped.

Strips of leather and folksy embroidered flowers are sewn in a chevron pattern near the hem and there are two elaborate fabric flowers with black sequinned hearts on the front.

My only accessories that day were a cerise triple string of beads, a vinyl belt in the same colour and a vintage celluloid brooch with delicately carved flowers, bought from the Brooch Lady in April 2017. 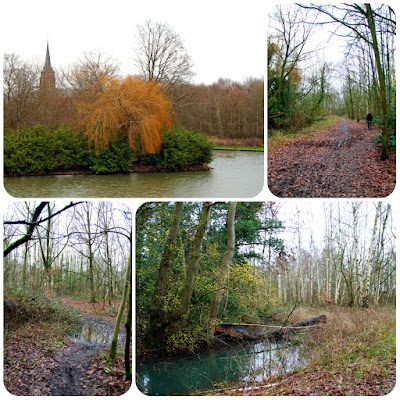 While we were having lunch, consisting of one of Jos's homemade soups, we brainstormed on where to go that afternoon. Over the last three years or so, we'd unwittingly started the tradition of going for a stroll around the sculpture park on Boxing Day. However, as we'd made plans to meet up with friends for a walk and a long overdue catch-up in the park on New Year's Eve, this kind of ruled it out.

Then I hit upon the idea of going to the so-called blue bridges, a scenic spot in the nearby town of  Rumst, which lies at the confluence of three rivers. In 2002, two very popular foot and cycle bridges were created here. I didn't take photos of them this time but you can find a collage I made after a previous visit here. 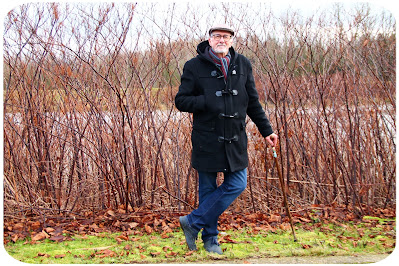 The dykes and towpaths on the riverbanks give access to several nature reserves and offer the opportunity for a plethora of walks.

On weekends and holidays, however, it can be quite busy here, the bridges and towpaths often  terrorized by groups of cyclists, which are a real plague for walkers, who must be prepared to jump out of their way at all times.

At first sight, there weren't too many of these about that day, but we still wanted to walk somewhere we were guaranteed of some peace and quiet. 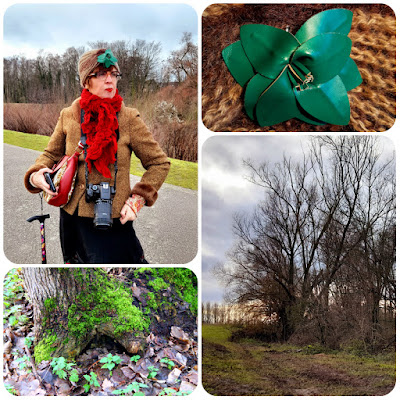 Then we remembered the "Oude Netearm", which is a small nature reserve established around an obsolete part of the River Nete. This was formed when the river was partly diverted in the 1970s for the construction of the E19 motorway, when a number of the river's meanders were separated from the main river, creating an elongated marshland.

Our attempts to walk the paths which criss-cross the reserve were regularly thwarted by patches so muddy that we had to give up and retrace our steps. 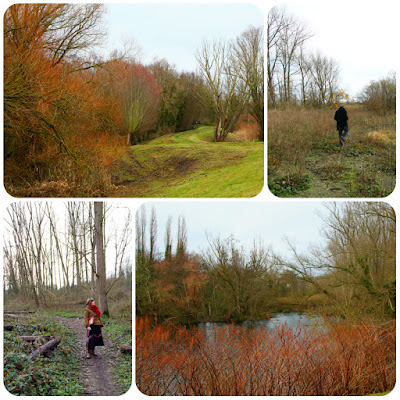 To combat the by now stinging wind, which was deceptively benign in the woods and grasslands of the flood plain but reared its head whenever we were on higher ground, I was wearing  a fur collared and cuffed Tweed jacket, accompanied by a frilly red woollen scarf. To my two-tone brown knitted turban hat - an old charity shop find - I'd pinned a green faux-leather flower corsage. 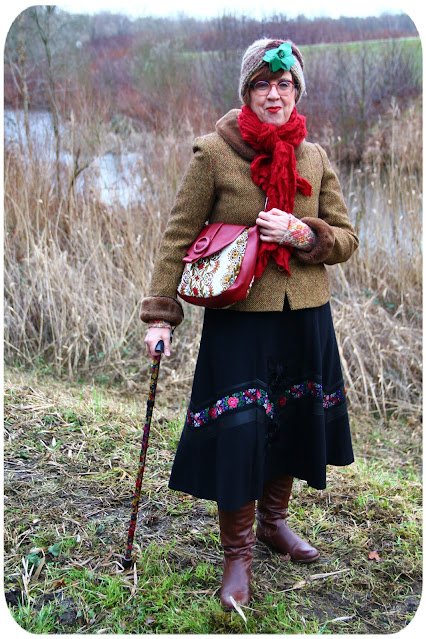 Peeking out from my jacket cuffs are the sleeves of the floral knit cardigan I was wearing underneath. Even if I only wore it for the walk and basically it wouldn't be seen, I still made sure I wore something which matched the rest of my outfit. I am, in fact, a fully paid-up member of the Secret Society of Secret Matching, a phrase coined by fellow member and lovely Instagram friend @jessiejessyg!

In the colder months, for instance, the t-shirts I wear underneath my dress or top usually match at least one of the colours of my outfit. Now don't tell me that Jessie and I are the only ones! 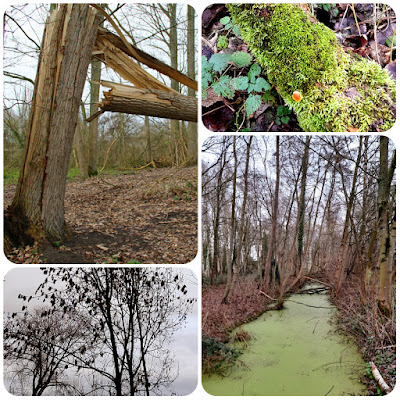 After walking along the towpath for a stretch, we came across a bridleway leading once again into the nature reserve. As the path looked mercifully free of muddy patches as far as the eye could see, we decided to throw caution to the wind and make one final attempt to enter the reserve.

The path meandered through hazy woods, passing the victims of earlier storms, often adorned with lichens, and lush meadows spongy with mosses. 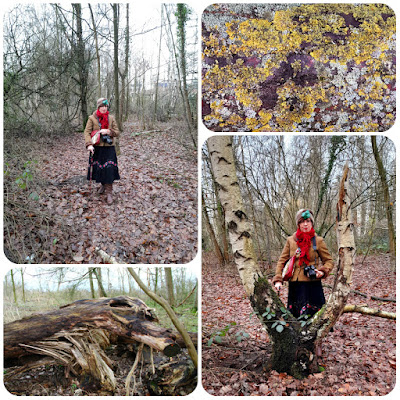 We stepped out of the way so that a man walking his dog could pass us by. Issuing a greeting, his brows furrowed when he spotted our non-welly-clad feet, informing us that the path would soon become flooded and that our feet were inadequately equipped to deal with it.

So, back to square one, or rather, the towpath, once more. 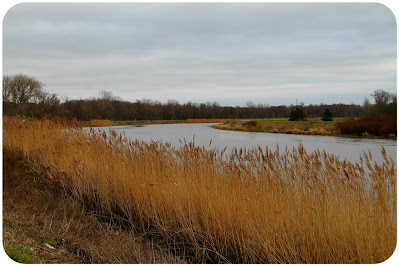 Chased by an ever stronger wind, its icy sting making our eyes water when we walked against it, the rain-pregnant clouds scudded across the sky, huddling together and knitting themselves into a granite grey blanket which would eventually block out the remaining daylight. 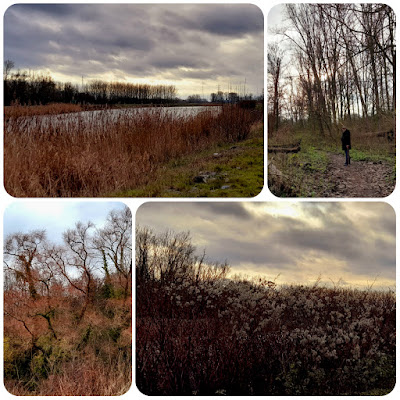 So, not just back to square one, but back to our car too, where we were especially thankful for the seat warmers which are an unsolicited bonus feature of our car.

Storm Bella started regaling us with a gale force wind overnight, which lasted until late afternoon on Sunday, and came accompanied by lots of rain.  Consequently, we didn’t venture outside all day, as it was far too dark and miserable.

Luckily, Dove Cottage and its garden sustained no bigger damages than two pots which were blown off the little table next to the bench at the bottom of the garden. 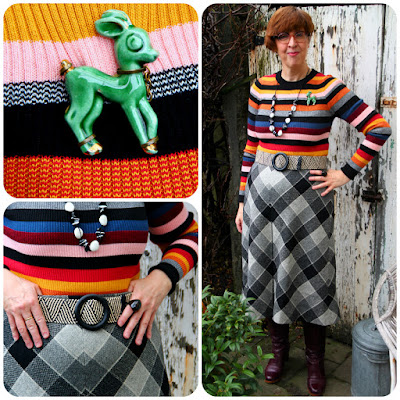 No outfit photos were taken either, but you're still getting to see what I was wearing as I wore it again in its entirety on Monday.

I was Queen of Patterns, wearing stripes, chevrons and plaids!

The plaids were provided by my vintage Gor-Ray skirt, with its single front and back pleat, which was a lucky charity shop find just over two years ago. You'll probably recognize the chevron patterned belt which joined my collection quite recently and which I've already been wearing a number of times. 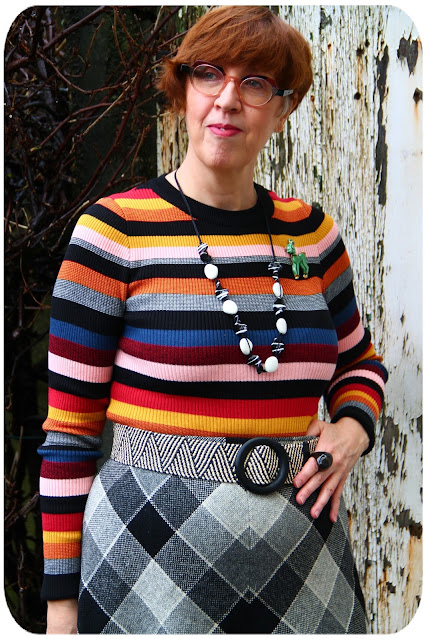 The stripes came in a multitude of colours and were supplied by a jumper from New Look, which was an old sales bargain.

My outfit was completed with a black and white beaded necklace and a vintage green ceramic big-eyed Bambi brooch. I was wearing my beloved burgundy boots and if I remember correctly my opaques were the same shade of blue as the stripe in my jumper. 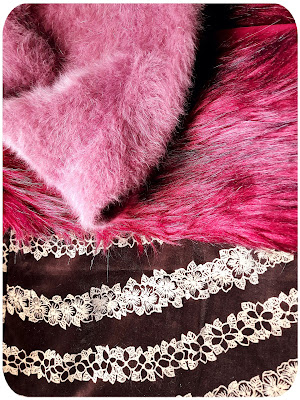 Storm Bella had left a grey drizzly day in her wake, with temperatures dropping towards freezing point.

After breakfast, and while Jos went to the newsagent's, I washed my hair, and then we hopped into the car for a rummage at one of our approved charity shops.

There, a trawl of the clothing aisles produced three very tactile and strokable finds! 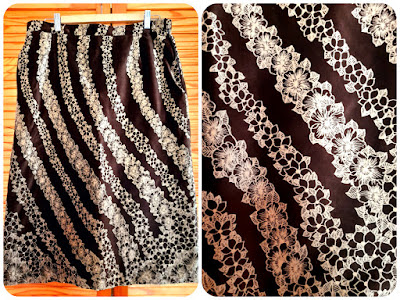 You'll get to see me wearing it in one of my next posts. My only gripe with it is that it doesn't have a large enough slit at the back, so that I was a bit hindered when walking in my usual striding gait. 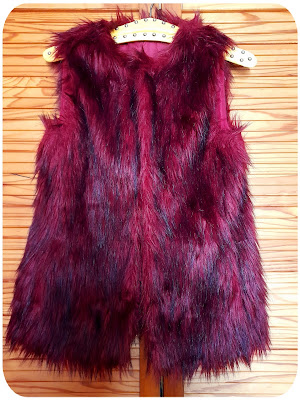 A burgundy furry Monster Vest (Sheila's term) was up next. Originally from Zara, if I remember correctly, but I have removed its scratchy label in the meantime.

My final find was this dusky pink furry hat. There's no label to identify its origins, but I like it that it is lined, which helps in giving it a bit of structure. 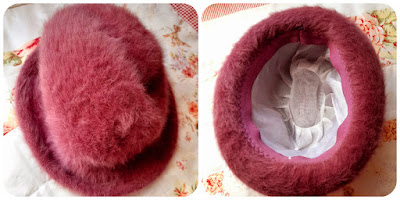 The year was swiftly striding towards its end, but we still managed a couple of walks and a final charity shop rummage before it was over.

But that, as well as the outfits I wore, will be for a next post.

Stay safe, sane and fabulous, everyone!