In praise of apricity

After a seemingly never-ending string of grey and rainy days, we were pleasantly surprised to wake up to the sun streaming in through our windows on Christmas day.

We hadn't made any plans for the day, but before you start feeling sorry for us, please don't, as this is exactly the way we like it. For many years, we didn't even get dressed until late afternoon, lounging around in our pyjamas until it was time for dinner. In that respect, Christmas was indeed different this year. After sleeping late-ish, and having our usual fruit and yoghurt breakfast in our dressing gowns, I stood myself in front of my wardrobe trying to decide on something festive to wear. 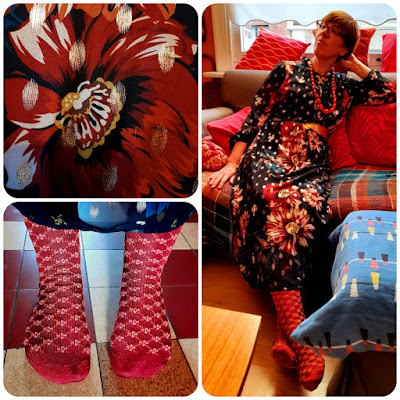 My eyes soon alighted on this black floral frock which for once isn't vintage nor even second hand, but a bargain picked up in last year's January sales.
I came across it when I wandered into the shop during one of my lunch breaks, but at only 10% off I couldn't justify its purchase. But once again my patience paid off. Fast forward several weeks when, walking past the shop again, its window announcing further reductions lured me inside. And there it was, reduced to 70% off. I am saying "it", as there was only one left, which happened to be in my size. It did have a minor flaw, which granted me a further reduction, and turned out to be easily and invisibly remedied. 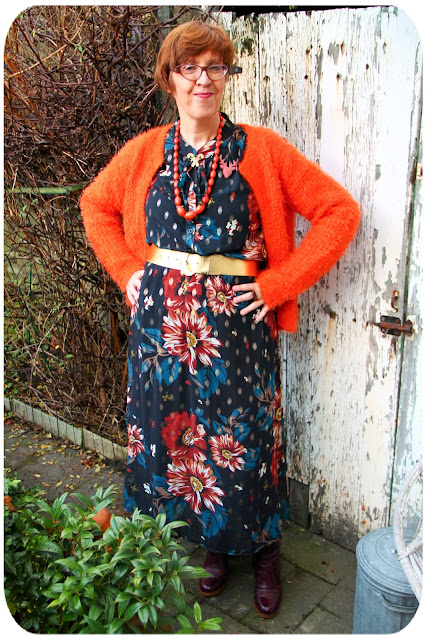 Its teal, maroon, yellow and cream florals are joined by dashes of gold, which prompted my choice of belt, charity shopped about two years ago. I opted for pops of orange in the form of my necklace and chunky cardigan. The latter was a bare necessity as the temperature had dropped below 5°C, and the frock's fabric, although lined, is a thin and all but see-through viscose. I enhanced its neck tie by adding a ribboned sugar cane brooch, a gift from the lovely and very generous Gisela! 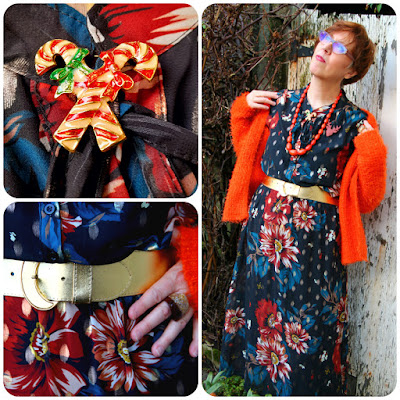 I was wearing a pair of pair of burnt orange opaques - layered over a pair of nude nylons for extra warmth - adding the festive socks you can see in the first collage. I'd picked these as well as another pair up in a village shop earlier that month.

I only wore my burgundy boots - the only vintage item in my outfit - when we briefly nipped out for outfit photos, exchanging them for my trusty wool-lined chocolate brown ones when we went for a walk after lunch. 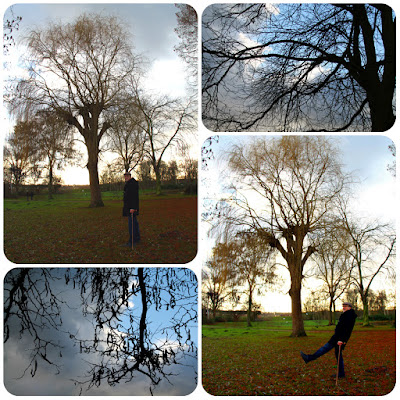 The at times heavy rains of the last couple of weeks ruled out a trek to one of the nature reserves as, established in former clay extraction areas, their sticky, muddy paths would be virtually impassable.

Another option would have been the sculpture park, but it was closed on Christmas day and, same as any of the other city parks, would have been far too crowded for our liking anyway.

Our dilemma was solved when I hit upon the idea of going for a stroll around the park in the neighbouring town of Duffel. One of our regular haunts which we used to frequent before or after a browse at the charity shop a stone's throw away, our last proper visit dated from January 2020. 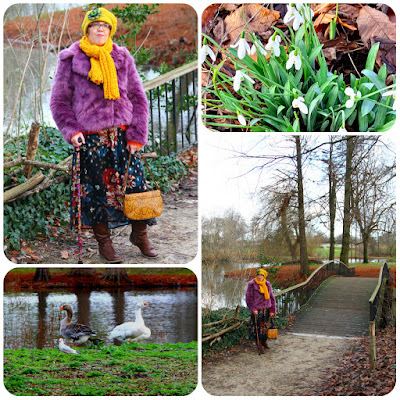 By the time we made it over there, the sun was hiding behind a layer of ominous looking clouds, but we persevered, hoping that the rain forecasted for late afternoon would hold off.
Besides, I'd brought my own sunshine, in the form of Monica's beret and scarf. For their first outing, they were accompanied by my purple fake fur and yellow snake print bag, both sales bargains, from January 2019 and January 2020 respectively.
Apparently, I was wearing lots of naughty non-second-hand purchases that day! 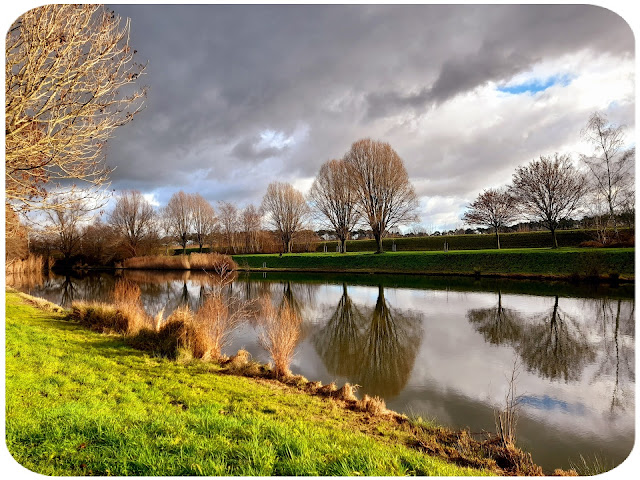 The park has been laid out along a stretch of the River Nete, whose towpath is running behind the line of trees reflected in the pond. The sun managed to break through the clouds again just as we were marvelling at the mirror-like qualities of its surface on this crispy cold and windless day.

The barren winter landscape with its silhouette trees and ghostly desiccated reeds and grasses was transformed by the sun's golden rays, which at this time of year, only days after Winter Solstice, were low and blinding. 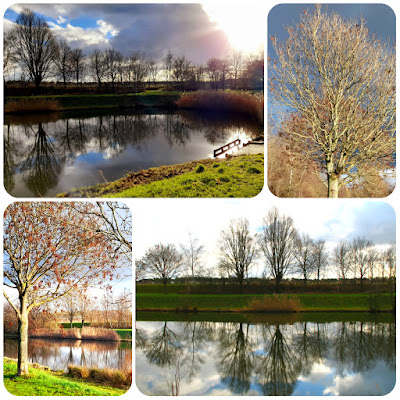 How delicious it is to bask in their glow. Apparently, there's a word for it: to apricate!  Apricity is an old English word for the warmth of the sun on a winter’s day.  I love old English words, a telltale wriggly line appearing under them as I type. 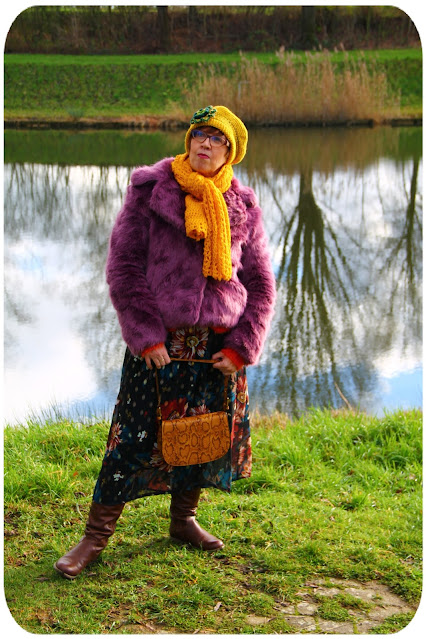 The park seamlessly segues with another, smaller one which lies to the south-east of it, its focus being the atmospheric ruins of a castle.

Ter Elst castle is one of the oldest buildings in the province of Antwerp, dating back to the 12th century when it was owned by the Hildincshusen brothers, the oldest known lords of Duffel.

It was enlarged and transformed into a magnificent castle in the 15th century, when it received notable guests such as Margaret of York and Philip the Fair. 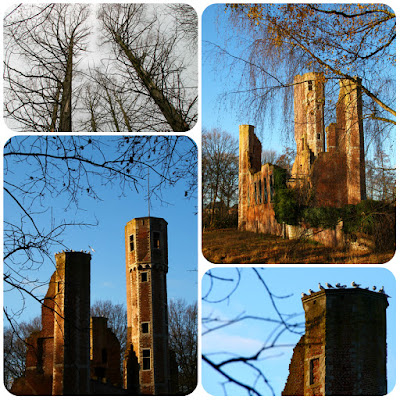 The castle was rebuilt after having burned down during the religious turmoil of 1584. Sources from the 17th and 18th centuries show an extensive complex, consisting of several wings and towers with a courtyard, surrounded by a wide moat and landscaped gardens.

By the end of the 16th century it was used as a presbytery. In 1799 the castle was seized and sold by the French occupiers, after which several of its buildings were demolished.

Finally, in 1879, the castle was sold to a certain C. Funcke, who established a brickyard in its immediate vicinity. This remained in business until the First World War, when both the castle and the brickyard sustained serious damages. 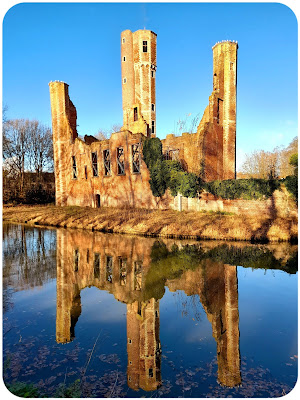 Sadly, the remains of the castle fell into ruin until it was acquired by the council in 1972 and it received protected status. 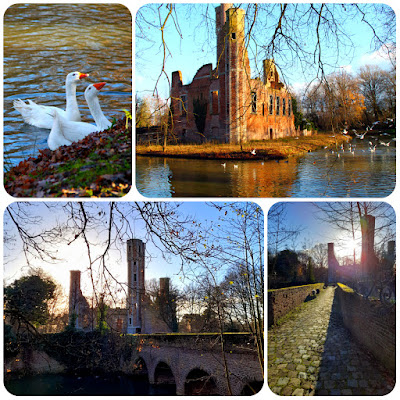 With every subsequent visit, the castle's main tower seemed to be leaning ever more precariously, and we often approached it with fear in our hearts lest some part of it had crumbled or taken a tumble since we were last there.

Consequently, we breathed a huge sigh of relief when back in January we noticed that some kind of scaffolding had been erected inside the castle and that plans seemed to be afoot to restore the evocative ruins.

More scaffolding had appeared in the intervening months, but did nothing to detract from the moated castle's photogenic quality. The clouds had all but departed now, unveiling a deep blue sky which joined the proud castle's preening in the mirror of its moat. 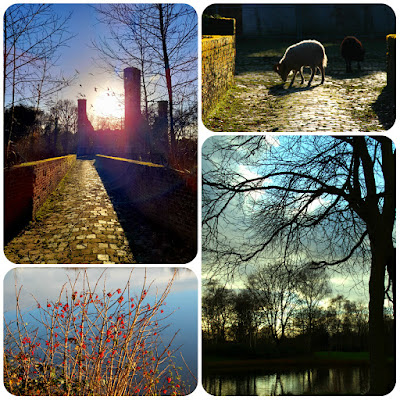 Walking the muddy paths circuiting the moat, we could hear the plaintive bleating of sheep, echoing and ricocheting off the castle walls, but it was only when we passed the bridge crossing the moat that the source of the bleating was revealed.

The lords of the castle have long been dead and gone, its rule now taken over by a flock of rare breed sheep.

Ducks and geese glided placidly upon the moat, until a family started feeding them chunks of bread. Suddenly, the quietness was shattered by the appearance of a flock of shrieking gulls, leaving the poor waterfowl begging for leftover crumbs. 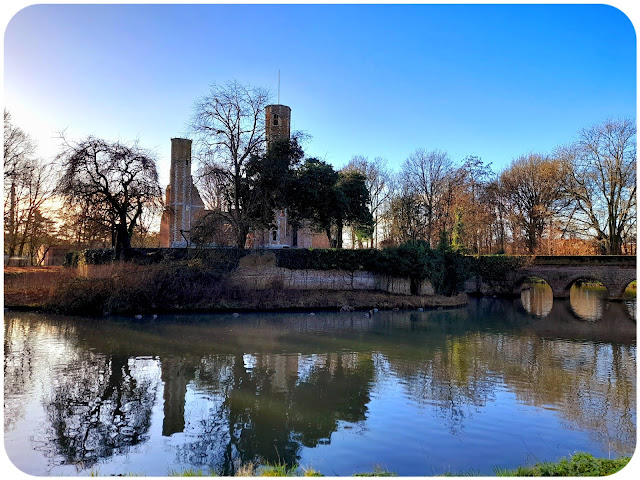 We'd come full circle now and were leaving the castle ruins behind us, re-entering the park and retracing our steps back to our car.

We were starting to feel peckish, and waffles and cream awaited us at home. But not before appreciating some more apricity before we went off! 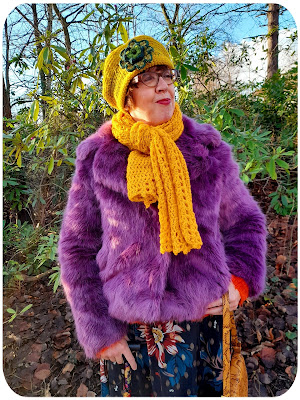 The weather forecast looked pretty dire, with storm Bella lurking around the corner, so I'm glad we were able to make the most of this sunny Christmas day.

I'll be back soon with more walks, outfits and general non-adventures. Until then, do stay safe and hopeful, my friends.