No escape from reality

Last Friday evening, after a nerve wracking wait for our spanking new government to finish negotiations, we were informed of Belgium's new restrictions, which would come into force as from Monday. We are now allowed close contact with only one person from outside our households, while you can invite four people, which must be the same for a period of two weeks, to your home if you respect social distancing rules. In public spaces too, groups are limited to four people. All cafés and restaurants have to close for at least a month, takeaway is only possible until 10 pm, and there's a curfew between midnight and 5 am. There's more, but that's it in a nutshell. All this in a bid to prevent new cases rising even more dramatically than they are already doing. Admittedly, the situation is particularly bad in Brussels and Wallonia, Belgium's French speaking part, but that doesn't mean that we are off the hook at the other side of the country.

As for the restrictions, we have no problem with them. It's not a complete lockdown after all. Nevertheless, there's simply no denying that things are a bit bleak as we head into the year's darkest months.

And while I know it's no use to bury one's head in the sand, I would very much like to do so right now. Hibernation has never sounded so appealing. 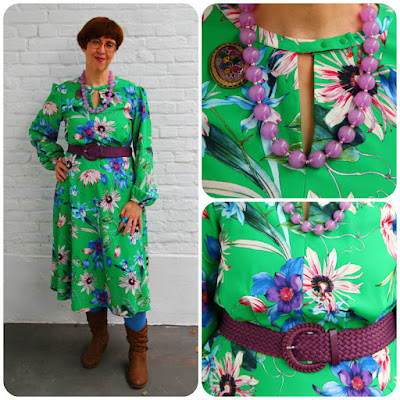 For the sake of my blog's continuity, however, I'm taking a short ride in the time machine, back to Tuesday, the 6th of October.
I woke up with a craving for fresh greens, which I found hanging in my wardrobe in the form of this calf-length H&M dress. Its floral extravaganza, featuring blue, purple, white and magenta strewn on a grassy green background was what seduced me to buy it in the sales about three years ago.
There was no lack of colour to choose from for accessorizing, so I wore a woven belt in a plummy purple at my waist and picked a lighter shade of purple for my beaded necklace. Purple appeared again as the background colour of my brooch, while my stash came up with opaques in the exact shade of blue of the dress's flowers. 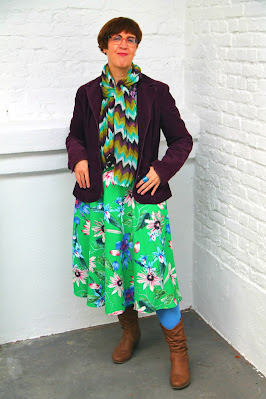 As the days are getting darker and colder, we are once again making regular use of our rented garage's photo studio, a communal parking space next to our garage box, its ancient bricks having received a fresh coat of paint during lockdown. I just wish it was nearer to Dove Cottage, so that we could use it more frequently, and not just when we need to use the car.

Since we were going out that morning, I wore a cord jacket in a delicious berry colour  and added a zig-zag patterned scarf featuring purple, olive, blue and white. Both were charity shop finds and, by pure coincidence, originally from H&M as well. 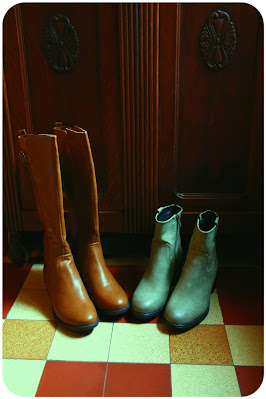 We were off to the local C&A branch at the edge of our little town, as Jos was in dire need of some new zip-front cardigans, which are a wardrobe staple for him. Having searched high and low in the charity shops without any luck, there was nothing for it but to go retail.

Mission accomplished, Jos waited in the car while I went into the shoe shop next door on my eternal quest for burgundy ankle boots to replace my tatty ones. And no, I didn't find what I was looking for, but I still didn't leave the shop empty-handed, having been seduced by a pair or caramel coloured tall boots and a pair of sage green ankle boots. 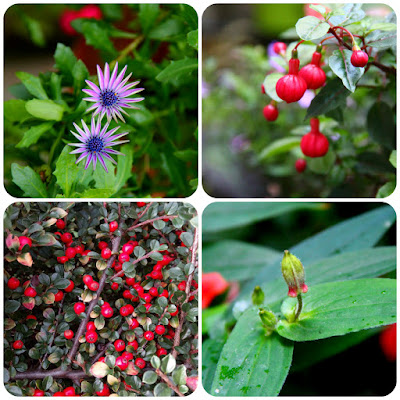 Rain and wind had been forecasted, but although the latter was present throughout the day, it remained mercifully dry until late afternoon, when we were treated to a couple of scattered raindrops.
Summer is still hanging on by its fingernails in our garden, with lots of annuals refusing to admit defeat and stubbornly keeping up appearances.  Most of our ancient Cotoneaster's leaves are still retaining their colour, providing a contrasting backdrop for its shiny red berries. And then there's our Toad Lily (bottom right), whose flower buds seem to be getting fatter before our very eyes. 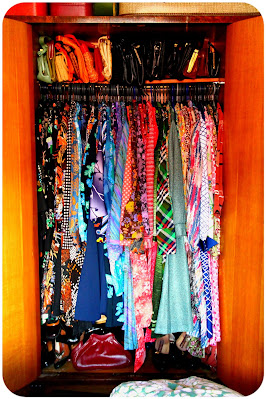 Spurred on by my new footwear, I put away the last of the Summer shoes, replacing them with a further selection of ankle boots and the odd pair of tall ones.
Then, deciding to strike the iron while it was hot, I carried on with my wardrobe switch, so that the main part of my wardrobe now holds the majority of my long-sleeved dresses. I've still got the skirts and woolens to do, as well as the warmer dresses, but having more time on my hands definitely proves to be counterproductive. There's always tomorrow, or next week ... 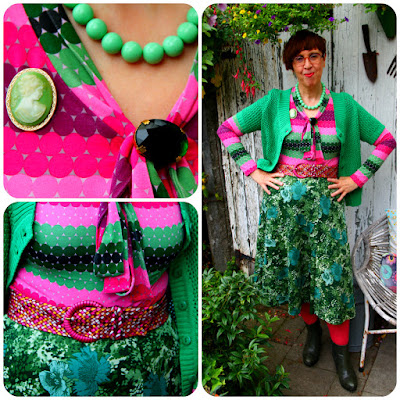 The weather continued to be reasonably kind that week, mostly dry and cloudy but with regular sunny spells, and temperatures around 15° C.

On Thursday, we were rudely woken up by workmen who started felling trees and demolishing a house on the opposite side of the crossroads near our house. Soon, they'll start building yet another block of flats in what was one of the last green spaces in our neighbourhood.

This called for the wearing of more green, so out came this green with a touch of turquoise floral vintage skirt and a charity shopped pussy-bow blouse in shades of green and pink. The pussy-bow was kept in check with an emerald green brooch, which was joined by a second brooch, a green-backed cameo, pinned to the blouse's bodice. 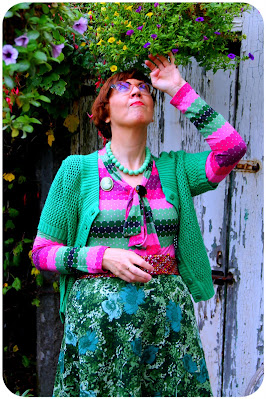 Pale green beads, a pink, white and yellow woven belt, hot pink opaques and forest green ankle boots completed that day's outfit.
Still determined to tackle some of the tasks on my to-do list, I started the gargantuan one of filing away the paperwork which had accumulated over time. Time, in this case and to my utter horror, turned out to be no less than two years! I'm in the habit of chucking any paperwork that has been dealt with into this ancient leather file, a family heirloom I remember playing with it as a small child. What a relief to have everything filed away in its appropriate folders which live behind the doors of our charity shopped 1930s cupboard (bottom left). 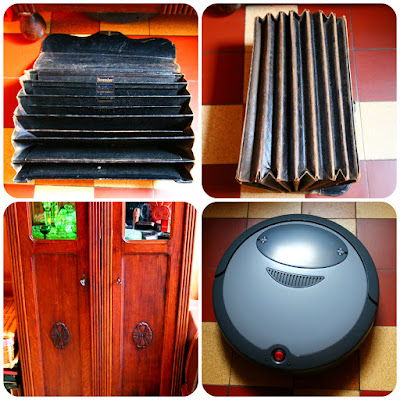 With neither of us in the mood for vacuuming, Jos suddenly remembered the robot vacuum cleaner he had been given by an acquaintance just before lockdown, and which had been unceremoniously dumped in our garage. Well, what can I say? It seemed to be scuttling around in circles - putting me in mind of one of Phoebe's toys, a little wind-up mouse - and we actually had to chuck the dust-balls in its path to make it vacuum them up!
I think we'll stick with our regular one! 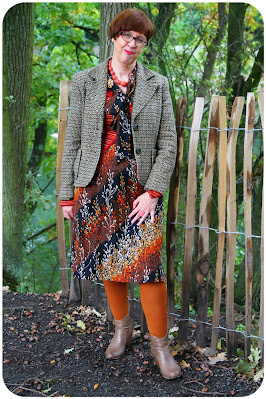 And then it was Friday again, which meant another charity shopping trip.
I was in an Autumnal kind of mood, so this vintage dress liberally sprinkled with sprigs of orange, brown and white berries fit the bill perfectly. In a swishy, lined rayon, it has three-quarter sleeves and - again - a pussy-bow. I took the lead from its brightest orange for my choice of opaques.
We'll be having a closer look later, but first: let's go shopping! 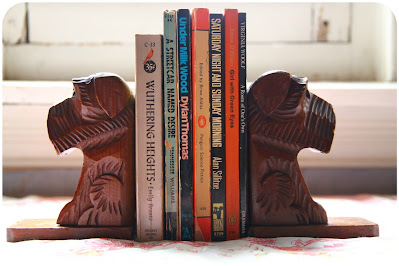 No sooner had we walked into the first shop than we came across these gorgeous wooden Scottie book-ends. They were ours for just € 1,20. 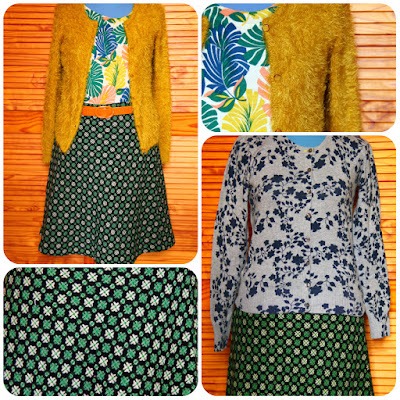 This knee-length green and white patterned woolen skirt is the latest one to join my burgeoning collection. The same shop also yielded a fluffy ochre yellow cardigan. I have similar cardies in burgundy and bottle green, and they are on constant rotation in Winter.
The grey cardigan with its blue flower pattern was my only buy in the second shop.
Both of them have already been worn in the meantime, with the skirt still awaiting its turn. 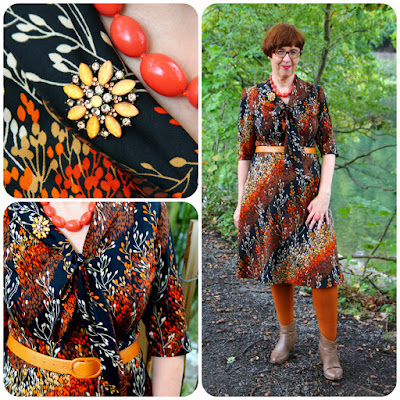 As we'd been running late that morning, Jos had made a couple of sandwiches to ward off the hunger pangs between shops.
We found the perfect place for this impromptu picnic in one of the chain of forts surrounding the city of Antwerp. Built between 1859 and 1864, most of them have been turned into parks and nature reserves, and this particular one happened to be on our route.
The perfect place too for outfit photos, showing you a close-up of the dress's print, as well as my belt, beaded necklace and brooch.  As for my ankle boots, they were obviously most inadequate for the short stroll along the muddy banks of the fort's picturesque moat. 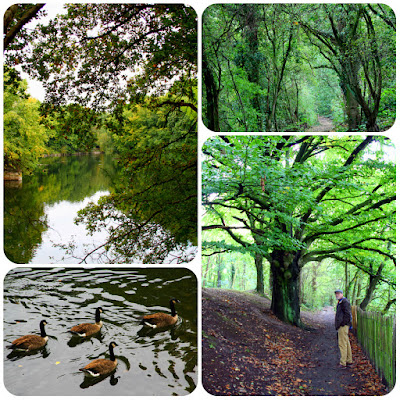 Vowing to come back here for a properly booted walk soon, we made our way back to our car to continue our shopping trip.
Back at home, with the weather still on its best behaviour, we did some well-needed work in the garden.
While Jos was cutting back the rampant ivy and other climbers, filling a huge garden waste bag to the brim, I finally planted the Hellebores and Pulsatilla we brought back from the garden centre in September. 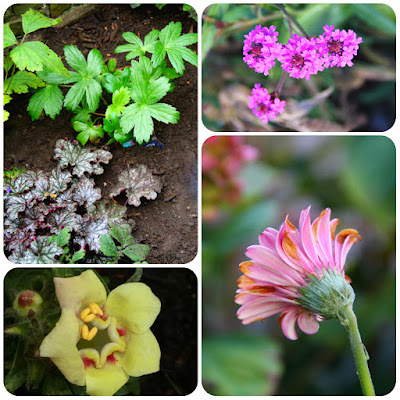 I'm rather looking forward to seeing their gorgeous blooms appear next Spring, even if for various reasons Spring seems to be an impossible eternity away.
Now, if you'll excuse me, I think I'll make a start with that hibernation I mentioned earlier.
The perfect way to stay safe, surely!
Posted by Polyester Princess at 19:16