Most of my blog posts are at least partly written with Phoebe snoring away in the background.

While I sit typing at my desk, there she is, curled up on the wicker chest behind me, a vintage sleeping bag draped over it for comfort. It’s one of her favourite spots, and she often follows me upstairs, jumping on the chest mere minutes after I’ve sat myself down. Her snoring, at times gentle but often quite loud, is a soothing soundtrack which blends perfectly with the strands of classical music emanating from my pc's speakers.

These days, our little black monster is the one constant in our lives, and I’m often quite envious of her innocence, oblivious of the sea-change which has taken place over the last seven months. 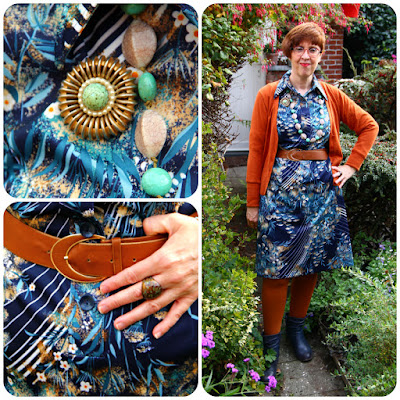 Time keeps ticking away relentlessly, and it's almost beyond belief that we've yet again put the clocks back last night and that Winter Time is therefore upon us once more.

Another constant in my life is the daily joy of dressing up, any pandemic woes notwithstanding.

The blue based dress I was wearing two weeks ago on Saturday was part of my birthday haul from Think Twice back in September, and had been patiently awaiting its turn ever since. The hint of orange in its print prompted my choice of cardigan and opaques, in a delicious burnt orange reminiscent of Autumn foliage. My belt's caramel shade made use of the same colour palette. 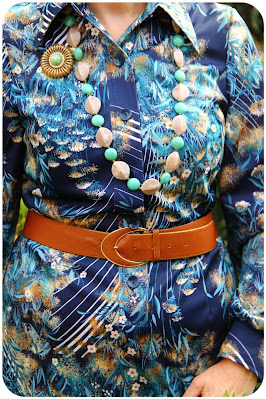 I went off-colour by adding some green, in the form of my brooch and bi-coloured necklace, where it joined the dress's off-white elements.
On my feet, my ancient navy ankle boots which, together with the opaques, were the only retail items in my outfit. 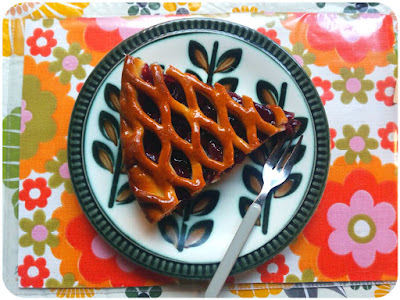 My sister called around that morning, and as we're not part of a bubble, we stood talking at the required social distance, she out on the pavement and me on our doorstep.
Our chatting was interrupted when a guy arrived in a van to deliver the pie we'd ordered a couple of weeks ago. These were being sold in aid of a local school and it's common practice here that they are being sold door-to-door by the school children. We are usually happy to participate when it's that time of the year again and one of the neighbourhood children rings our doorbell. 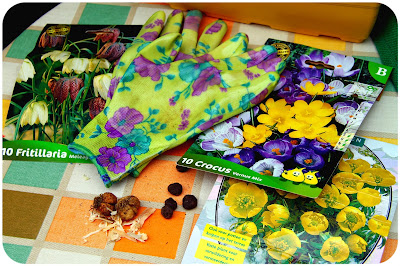 After a hefty slice of cherry pie for lunch, I decided to make the most of the dry and reasonably sunny weather and make a start with Spring bulb planting. So far, I've done the snake's head fritillaries (Fritillaria meleagris), crocuses and winter aconites (Eranthis hyemalis). The snowdrops, grape hyacinths and alliums are still on my to-do list, but need to wait until their designated places in the border have been cleared.
I had finished just in time before it started raining, which soon increased in heaviness and continued to plague us intermittently throughout the evening. 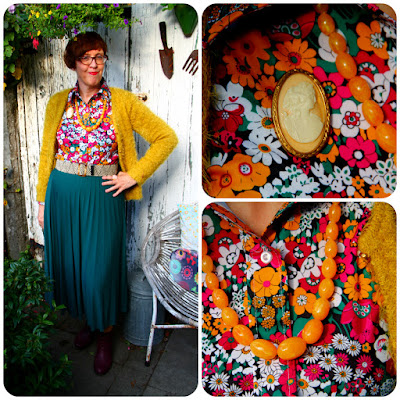 What a relief to be greeted by the sun on Sunday morning!  Just to be on the safe side, however, I decided to play my part and wear some bright sun-shiny colours.
The calf-length bottle green pleated skirt was a cheeky retail buy the other week, picked up at the same time as the boots I mentioned in my previous post. The vintage shirt, with its pink, green, yellow and white florals, was a charity shop find back in March 2019, and as a firm favourite, it has been making regular appearances on the blog ever since. As has the belt, which has been in almost constant use after I set eyes on it in a haberdashery shop just after lockdown. 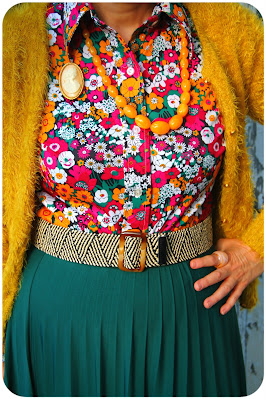 The necklace was a gift from my friend Inneke, while the fluffy yellow cardigan was one of my latest charity shop finds. The first of its undoubtedly many wears!
That day, I indulged in my usual Sunday pastime of pottering around house and garden, making photos of the latter's Autumnal exuberance. 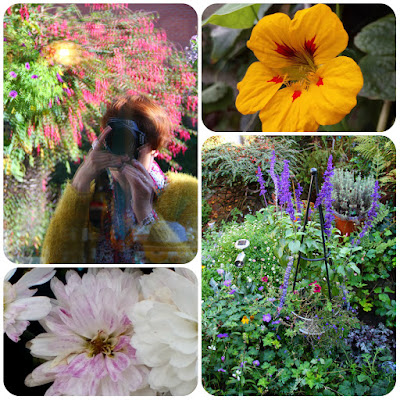 As a drop in temperature had been forecasted for the next week, I thought I'd better get out a selection of slightly warmer scarves. In fact, I was relishing the thought of wearing my favourites, in particular the ancient frilly turquoise one and the fluffy sugar pink boa I charity shopped last year.
Imagine my panic when I couldn't find either of them. I think I looked in all likely as well as unlikely places all over the house, until I finally found them hiding in a suitcase in the company of my faux fur stuff. What a relief! 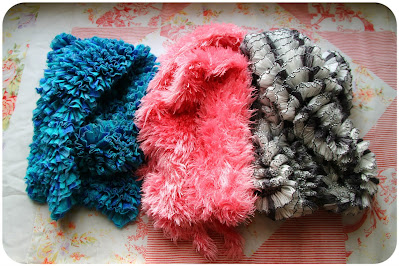 The temperature had dropped to highs of only 13° Celsius by Monday, and even though it turned out to be a sunny day, it was quite chilly when I left for the office that morning, so I insisted on wearing one of the lost and found scarves!
Tuesday saw a repeat of Monday's weather, although it started clouding over by early afternoon. Jos had a hairdresser's appointment in the morning, so during his absence, I dusted the dining room and mended a half-slip and a dress, both of which had suffered split seams. 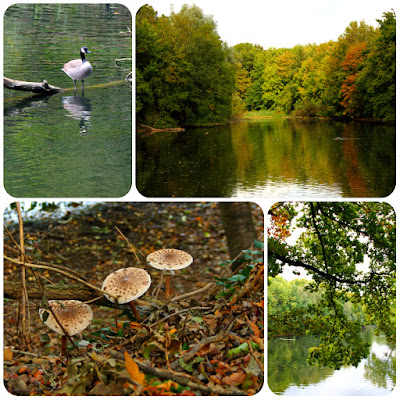 In spite of the clouds, which at some point looked as if they held rain, we were itching to get out of the house and clear out heads. There's nothing quite like immersing yourself in nature to chase away the dark thoughts that keep rattling around in your head like uninvited guests who have more than outstayed their welcome. 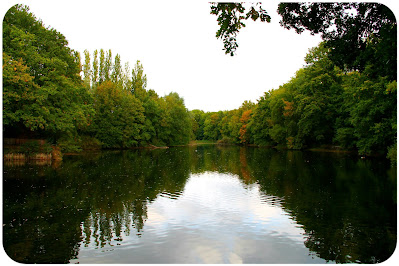 Not wanting to venture too far from home due to the weather's apparent uncertainty, we thought we'd check out the domain surrounding the old fort where we had our impromptu picnic the week before.
There's a footpath around the outer moat, which we followed until we came full circle. In this day and age, there's a one-way system as the path is reasonably narrow. Nevertheless, we came across one or two dog-walkers ignoring the rules and meeting us from the opposite direction. 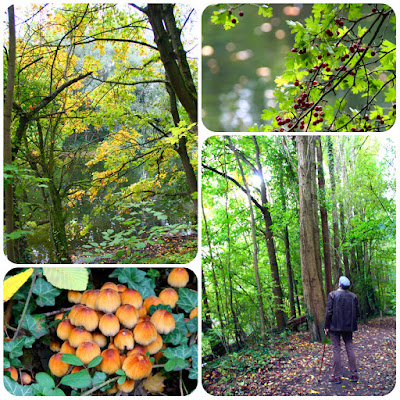 However, on this Tuesday afternoon, with the sun regularly hiding behind a blanket of clouds, there weren't too many people about, so that we could enjoy the spoils of Autumn in perfect solitude.
We even found the perfect location for outfit photos in a little clearing, where I was able to indulge in a spot of leaf-kicking and pretend forest-bathing. 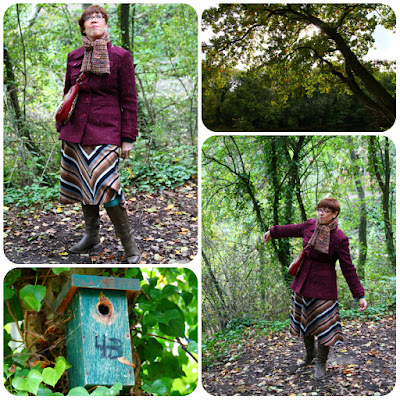 It was the perfect weather for my burgundy tweed jacket with knitted sleeves and yoke, a serendipitous charity shop find about a year ago. It's got multi-coloured speckles all over, tying in with the rainbow of colours in my ancient knitted scarf.
As you can see, I was properly booted this time, no luxury on the at times slippery and muddy path. 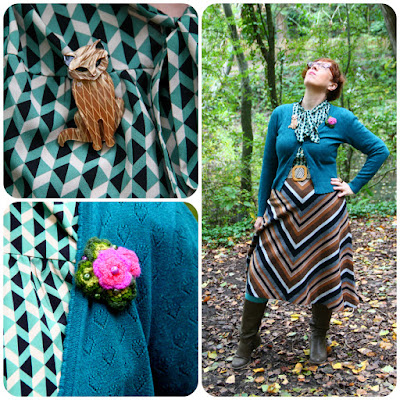 Underneath my coat, I was wearing a vintage chevron striped wool skirt in black, brown and bluish grey. My geometrical print blouse with its tie collar started life as a mini dress bought from the high street. I hardly ever wore it but loved the print too much to let it go, so I painstakingly shortened it into a blouse.
I needed a large brooch that wouldn't get lost in the print, so out came my fake Lea Stein cat brooch, while I pinned a knitted flower corsage to my charity shopped King Louie cardigan in exactly the same shade of blue as my opaques. 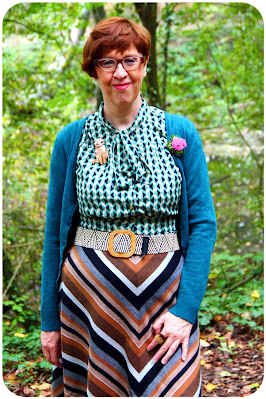 You would be forgiven for thinking that the chevron striped belt I'm wearing is the same as the one I was wearing in Sunday's outfit, but look again and you'll see that the buckle is different. Both belts are the result of some retail therapy after lockdown, and have fastly become firm favourites. 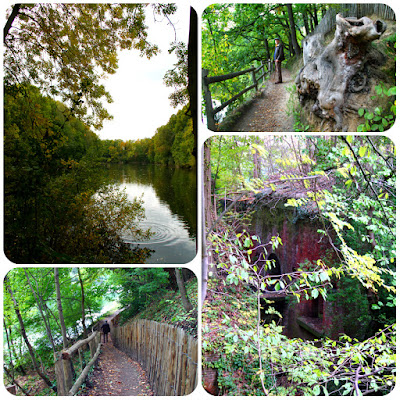 At some point, the path steadily climbed above the fort itself. A backward glance was rewarded by a glimpse of its deliciously faded, creeper clad and moss encrusted, glory.
There is no denying that we were feeling decidedly less stressed at the end of our walk, our moods having been boosted by the language of nature. 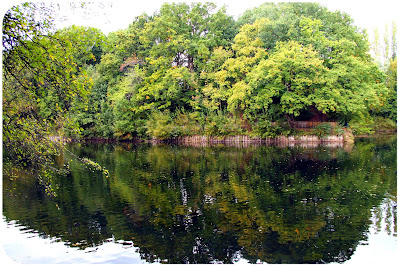 I'll be back with another exciting slice of life in pandemic times in a couple of days. In the meantime, I am counting on all of you to stay safe, sane and fabulous!
Posted by Polyester Princess at 19:25