Yet another flea market has come and gone and I haven't even told you about our finds on the previous one! I really must get my skates on! They'd have to be old fashioned roller skates, though, as I used to love to whizz around on them a lifetime ago. Ice skates, not so much, as I had a little ice related accident when I was four years old, ending up with a broken arm and a lifelong trauma.

But I'm blathering on a bit, and if I keep going at that rate I will still be talking about my December outings and outfits well into the new year!

So, back to the first Sunday of the month, when we were all ready to go to yet another extra edition of our favourite flea market. 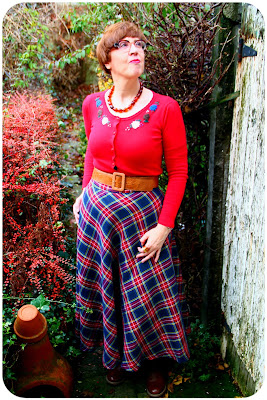 Here's the wrongly sized cardigan I found at the charity shop that weekend. As soon as I clapped eyes on it and its delicious embroidered flowers, I knew it would be the perfect companion for my tartan pattern circle skirt.

I fell head over heels for the skirt when I was trying to shake off the New Year blues on the second day of this year by going for a walk around my little hometown. Halfheartedly looking at the festive shop windows which were now past their sell-by date, the skirt was imploring me to ignore my self-imposed rules and principles about not giving in to fast fashion.

In addition, the shop in question was making an early start with the sales, so that any left-over resistance melted away like ice cream on a hot day. 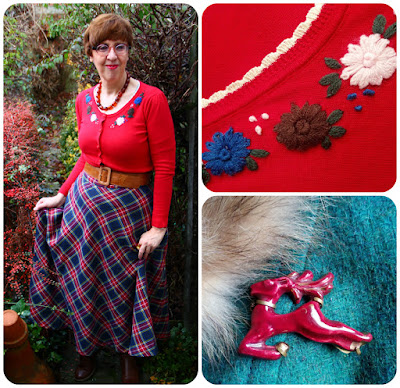 As a nod to the brown flowers nestling between their blue and white sisters, I added a translucent brown beaded necklace and a wide tan belt.

I lost count of the number of times I was told I was dressed for Christmas. Well, maybe I shouldn't have worn my green furry collared jacket on top, and pinned the leaping stag brooch to it, which one of the stall holder insisted was a reindeer! 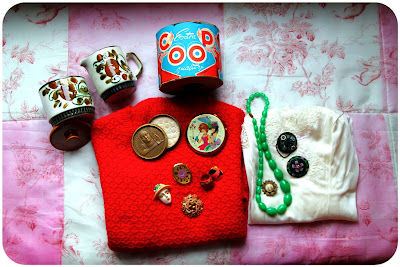 We have a season ticket for this flea market which, except for July and August, is being held one weekend a month. This year, there were some extra editions in November and December, and while this might sound like a good thing, there were fewer stalls and, apart from the usual diehards like us, it seemed to be one too many for a lot of regulars.

This particular edition still had a good mix of stalls selling an array of items, from lovingly laid out vintage to haphazardly packed cartons containing everything but the kitchen sink.

Our finds were a mixed bunch as well. The red woolly thing is a jumper and it was my first buy that day. Originally from the high street, I was more than happy to hand over its € 2 asking price. The creamy thing on its right is a vintage slip, for which I paid the same price. They are becoming rarer than hen's teeth these days. 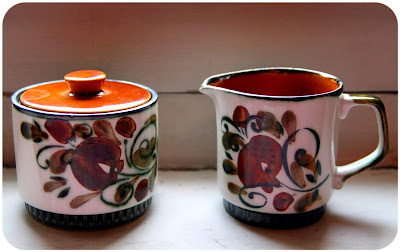 At our friend Tanja's stall, we fell for this sugar bowl and milk jug. Dating from the late 1960s, they are from the Belgian Boch pottery and the pattern is called Argenteuil. We already have several pieces of this pattern, including a coffee pot, so it was obvious that these had to come home with us. 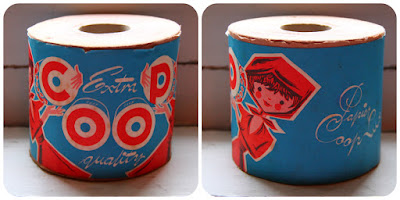 No, your eyes aren't deceiving you! This is indeed a roll of loo paper. A vintage one, obviously. Isn't that packaging absolutely fabulous? This has gone straight into the display on top of our bathroom cabinet, where it is joining another roll from a different brand. For a little peek inside our tiny bathroom, see my post from June 2016. As this is over 3 years ago, it goes without saying that it's a bit more crowded up there now! 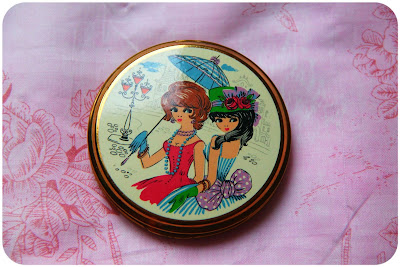 From Rita, who usually has a stall back-to-back with Tanja's, came this delightful vintage powder compact, while Jos pounced on the Expo 58 medallion inside its round blue box stamped with the 1958 World Fair's emblem, which came from the same stall. 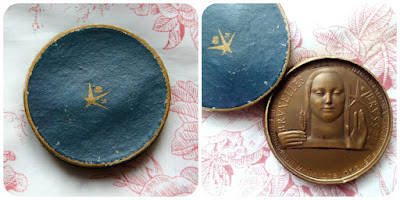 I'm always on the lookout for cheap 'n cheerful costume jewellery, like these chunky rings and mottled green beaded necklace. 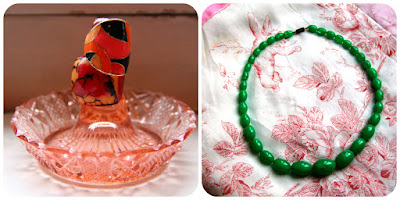 We were already more than halfway through the flea market's aisles when I found my first brooches.

These all came from the same lady from whom I've been buying for years. Pickings were meagre this time, but I still came away with these four. 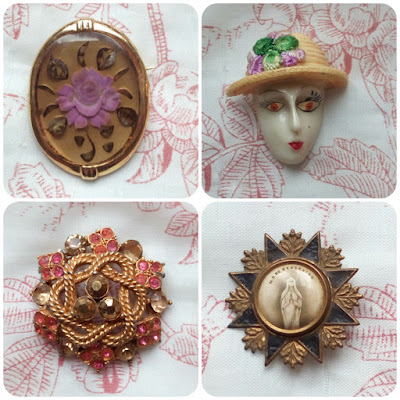 My favourite and most exciting find of the day came at the very end. Browsing another regular trader's stall, I spied these two brooches hidden away inside a display case. It is thanks to French blogger Solenn (you can find her blog here) that I recognized them as 1940s handmade brooches. 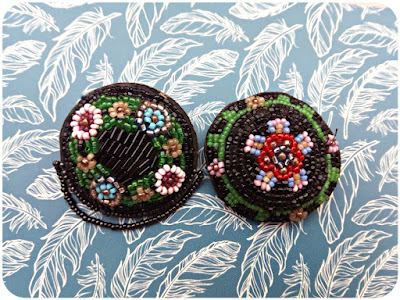 The following week brought us another string of dark rainy days, the rain often increasing in intensity by late afternoon, and resulting in the usual rush hour traffic disruption. 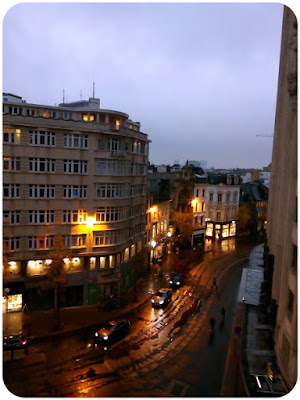 By Friday, the temperatures had taken a nose dive as well, but at least I had the afternoon off so that we could dash outside in daylight for some outfit photos.

I didn't stop raining all afternoon, and I had no option but to make use of my brolly.

In case you are worried, my trusty photographer took these shots standing under the glass awning outside our kitchen door, so that he didn't get wet either! 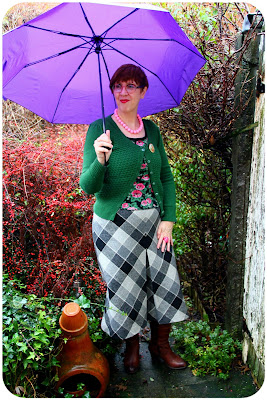 The cold prompted me to dig out my woollies, starting with the plaid Gor-Ray skirt which was a lucky charity shop find about a year ago.

The gorgeous jumper with its profusion of pink roses is another King Louie find. Both the jumper and the green Mango cardigan were charity shopped as well.

I just love pink and green together! 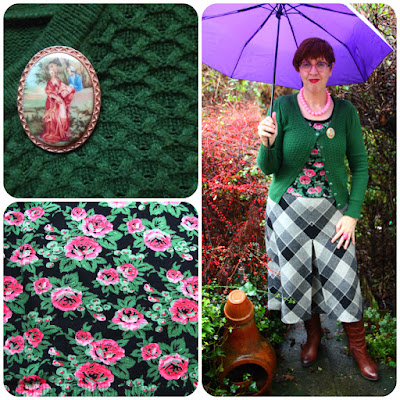 As they are not visible in the outfit photos, I included a close-up of the jumper's delightful puff sleeves.

I thought the Limoges style ceramic brooch enhanced the old-fashioned romantic vibe of the jumper, while I chose more pink for my other accessories, a string of pastel pink beads and a fuchsia chunky plastic ring. 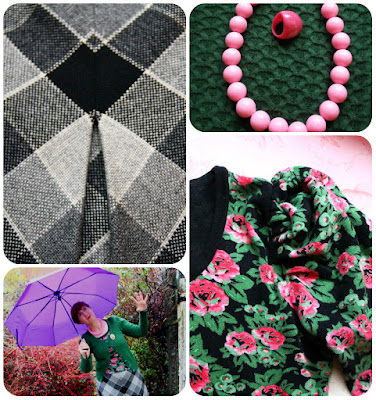 So, that is all for now, my dears.

Now, if you'll excuse me, I'm off to practice my (ice)skating routine in readiness for my next catch-up of outfits!