In these ever darkening days, when every fibre of my being craves hibernation, it's hard sometimes to drag myself out of bed on weekday mornings.

But needs must and I have to face the music, even if it consists of the jarring tunes of a rainy commute, overcrowded public transport or a long wait for the latter in the bitter, toe-freezing cold.

But once out of bed, my wardrobe never fails to put a smile on my face, its rainbow of colours always a pick-me-up and especially so at this time of year. It's colour magic! 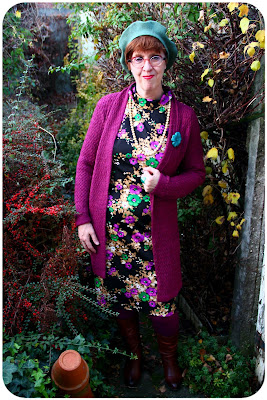 On the first week back from our Zeeland break - the travelogue of which I briefly interrupted - I just couldn't summon the energy for an indoor outfit photo session after work, so you'll have to take my word for it that what I was wearing was every bit as colourful as you've come to expect from me.

This is what I wore on the Friday of that week. I usually finish work a bit earlier on Fridays and so we were able to catch the sun's last rays before she dipped below the horizon, making way for darkness to descend. 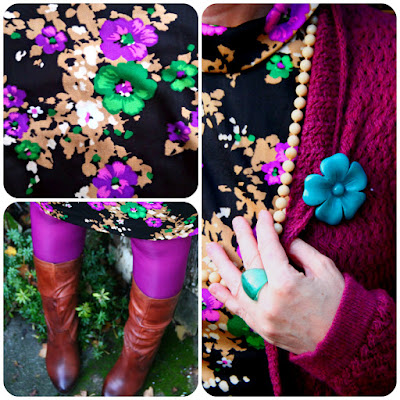 The vintage shift dress is an old favourite and one of an ever growing selection of black printed dresses residing in my wardrobe.

Its eye-popping floral print offers endless accessorizing opportunities and this time I opted for opaques in a fiery magenta and a chunky long line cardigan in the same colour. The cardigan is from Belgian brand Hampton Bays and a fairly recent charity shop find. Their cardigans retail at over € 100, so this one was a snip at just € 4.

The beads were a hand-me-down from a friend, while the large flower brooch, which provided an unexpected pop of turquoise, was bought from the Brooch Lady back in Spring. 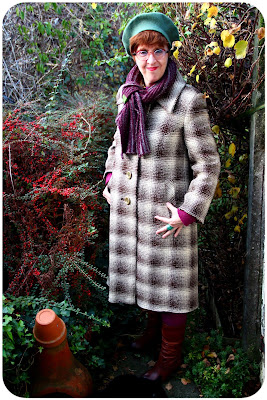 And this is how people saw me during my commute for most of that week.

I'm trying to alternate my Winter coats to make sure that they are all getting worn. This handmade vintage 1960s beauty was a lucky find at Oxfam several years ago.

My purple scarf, which features a bright green stripe, and my sage green beret helped to keep me warm and toasty that day.

Apart from my opaques and boots, everything in my outfit was bought second hand. 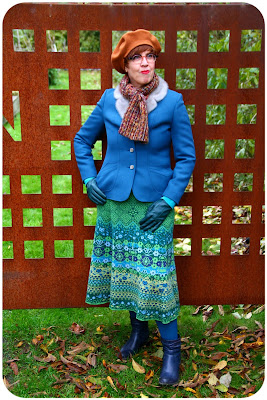 We couldn't wait for Saturday to arrive as we were looking forward to a good old rummage in the charity shops. Apart from a brief visit to a charity shop in Middelburg, it had been three weeks since our last proper shopping trip.

My outfit that day was an organically evolved symphony of blues and greens. 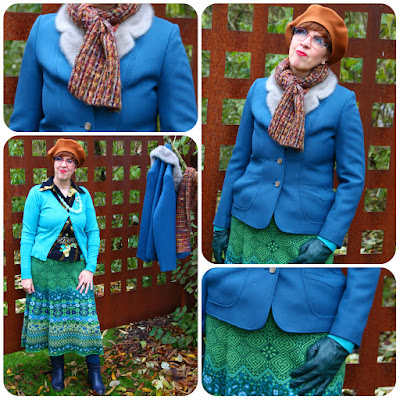 Stopping at the entrance of the museum garden further up our street, we took the opportunity of its photogenic rusty gates, as well as the dry and reasonably mild weather conditions, to take some detailed outfit photos.

My vintage new wool jacket in a scrumptious shade of teal with a dove grey furry collar was a Think Twice find, as was the Burberry beret I wore with it. I've been wearing the scarf - an old retail buy - a lot lately, as it's just perfect for those in-between days, plus it compliments most of my coats. 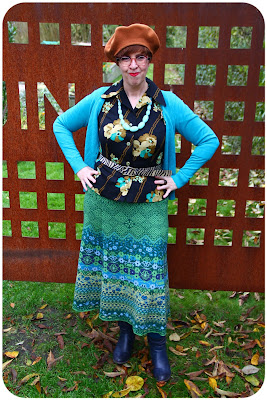 I fell head over heels for the soft wool knit skirt with its gorgeous jacquard pattern when I spied it on the rails at Think Twice. It was during one of their sales and I just couldn't get my head around the fact that it hadn't been snapped up yet. By then, it was going for just a couple of  €, so I was feeling double lucky.

It's by Hess Natur, a German label which has been promoting fair fashion since 1976.

Look at that glorious pattern! 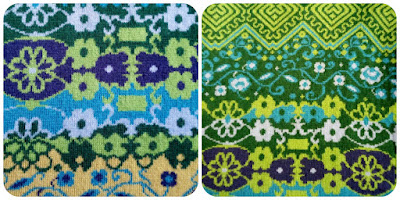 The blouse, in black Diolen printed with diagonals and flowers, was another Think Twice find, predating the skirt by many years: it was one of my very first vintage buys. Apart from the obvious attraction of the print, it's got the most divine but virtually unphotographable buttons.

The belt was a cheeky retail buy from a well known Belgian haberdashery and accessories shop during that week. The shop has got a good selection of opaques, which is why I went in there in the first place. They had some belts going at half-price - and no, it wasn't on Black Friday - and I simply couldn't resist this zebra striped one.

The aqua beads are charity shopped but originally from H&M. I know this for a fact, as I used to have them before, but stupidly sold them at a flea market in a moment of madness. 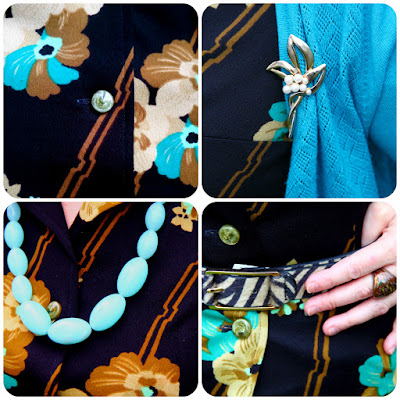 As for our charity shopping trip, this was a bit of a disaster.

We'd been to the garden centre first, as we needed some peanuts, mixed seeds and fat balls for our garden visitors, as well as a couple of plants for our newly acquired plant table, and when we finally arrived at  the first shop on our list we noticed that it was unusually busy. It transpired that there was some kind of Christmas fair going on. Nevertheless, we persevered as we needed some ceramic pots for the plants we'd just bought. It took us ages to park, then we had to trawl through tables groaning under the weight of all sorts of Christmas tat, and finally queue for ages at the checkout.

After that, we gave up on our plans and just drove home instead. 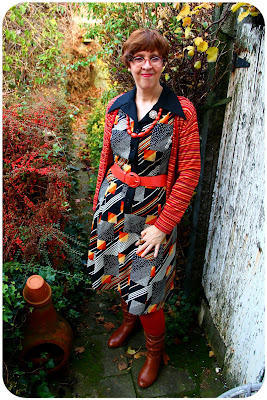 The weather forecast for Sunday looked promising: it was going to be chilly but with lots of sunshine. However, a light blanket of grey was obscuring the sun when we drew our curtains that morning.

But never mind, as we had plans for the day, and you'll never guess what they were: we were going back to Zeeland!

We weren't going on another holiday, mind you. Instead, we were off to visit friends who live in a  part of Zeeland known as Zeeuws-Vlaanderen (good old Wikipedia offers the English name of Zeelandic Flanders), lying south of the Western Scheldt which separates it from the remainder of Zeeland to the north and bordering Belgium to the south. It's just under an hour's drive from where we live. 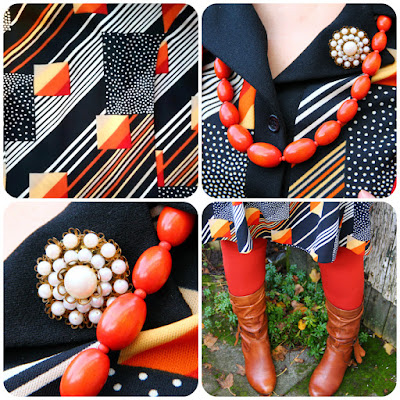 One of our friends is my wonderful ex-colleague Kris, who moved to Zeeland, where he and his husband Marnix are running a farm.

As a tribute to the Netherlands, my outfit of choice involved a lot of orange, the country's national colour, starting with my 1970s Petri dress, which I accessorized with orange opaques, beads and belt. There's orange in my striped cardie as well. 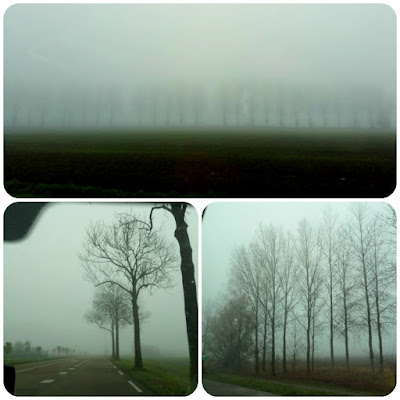 Leaving our village, we could see a misty veil on the horizon, which by the time we reached the motorway had developed into a full-blown dense blanket of fog. While this might have made for some atmospheric photos, driving conditions were precarious, so that we were more than relieved when we reached our friends' welcoming farm house. 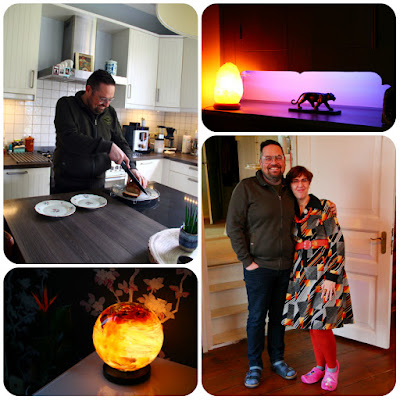 Don't wear your best shoes, Kris had warned us, it's quite muddy here!  So we heeded his advice and what's more, we removed our shoes and boots at the door, replacing them with our clog slippers from Middelburg! When in Holland, and all that! It goes without saying that much hilarity ensued! 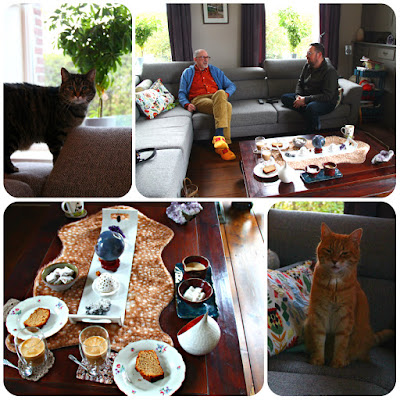 Alas, poor Marnix couldn't be there, as he had work to do on the farm, but we were joined by the adorable resident cats, Kiki (top left) and Dries (bottom right).

We were treated with Kris's home homemade cake and chocolate truffles while we chatted and were given a tour of the house's latest transformations, including a dressing room I am quite, quite envious of. 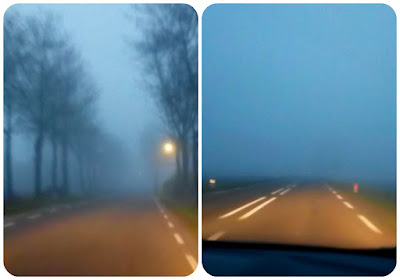 The fog had become even denser by late afternoon, so that the first part of our journey home was a particularly scary one. I'm glad to say that conditions improved greatly once we'd left the low-lying countryside behind and were heading towards the motorway, but we still breathed sighs of relief when we finally got home.

So that was another weekend come and gone!

I'll be treating you with another episode of the Zeeland travelogue in my next post.