The sea and the sand

You know how it is with the best-laid plans, and how they often go awry!

Even if we had quite a laid-back approach to our little holiday, there were still one or two things on our mental list that we'd hoped to tick off. One of these was a walk in a nature reserve in the north of the Walcheren peninsula along the North Sea Coast.

The weather forecast for Thursday looked promising, so imagine our dismay upon waking up once more with the rain lashing against our bedroom's skylight window.

But Jos's weather app said it would clear up by 11 am, so after moping around a bit I had the brainwave of visiting Middelburg's edge of town charity shop first. However, the shop is only open on certain days, and apparently I got my dates muddled, as the shop's entrance remained firmly closed. 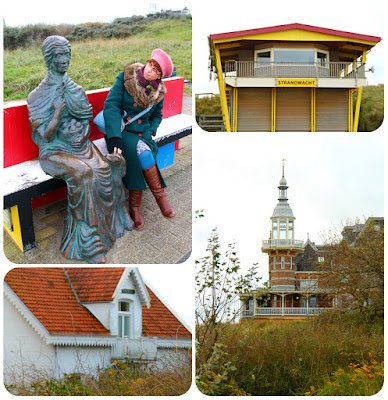 By then the rain had lessened considerably and it looked as if that weather app had been right for a change. With that in mind, we decided to drive down to the coastal town of Domburg, even if it was just for a short walk along the beach and lunch at a restaurant we'd been to last year.

Domburg is one of the oldest and most famous seaside resorts in Zeeland.

In Roman times, there had been a temple to honour the goddess of Nehalennia. This goddess was seen as a patroness of traders and sailors and was often depicted with a basket of fruit and a dog, which were believed to be signs of prosperity and fertility. And here she is, sitting next to me on the so-called Mondriaan bench. But more about that later. 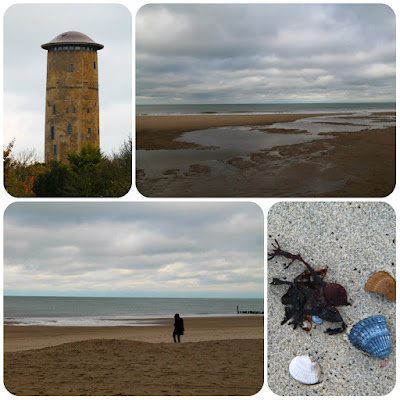 A seaside resort since the 19th century, Domburg owed much of its popularity to physiotherapist Dr. Johann George Mezger. Being a promoter of the beneficial effects of sea water and salty air, he set up shop in Domburg in the late 1800s, bringing with him a wide circle of famous patients. 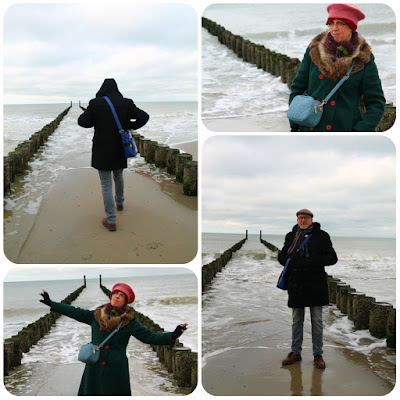 Undeniably, an air of artistry surrounds Domburg, as many artists made their way to the town at the beginning of the last century, attracted by the peaceful atmosphere, the unspoiled surroundings, the sea, and perhaps more than anything by the famous light of Domburg.

The most renowned of these artists is undoubtedly Piet Mondriaan. There is a Mondriaan walking route you can follow, which takes you past the many locations painted by the artist in Domburg and the surrounding area. There's no doubt that you will pass the bench painted in the typical red, blue, yellow and black colours associated with the Dutch art movement De Stijl (The Style), of which Mondriaan was one of the central figures 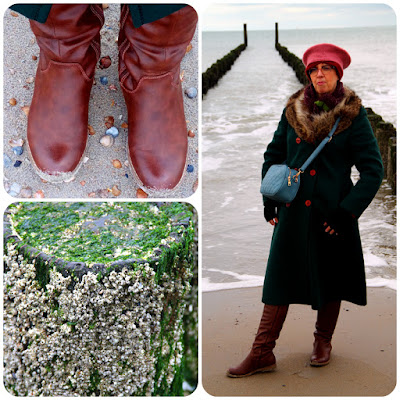 People still flock to Domburg in their masses in high season, but arriving there on a cold and grey November morning, the small town's high street was virtually deserted and we had the wide beach practically to ourselves.

The tide was starting to come in and the gently lapping waves provided us with a soul-soothing background for a bracing walk along the shoreline. The sky above us was still layered in shades of grey, but didn't look quite as menacing as before and any sign of rain had disappeared around 11 am as promised. 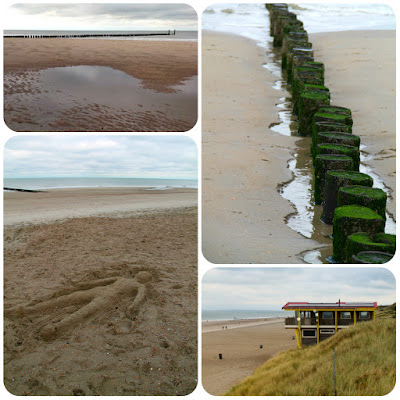 The sea air had made us hungry and we retraced our steps back up to the promenade, meeting this rather creepy sandman stoically awaiting his lot along the way. 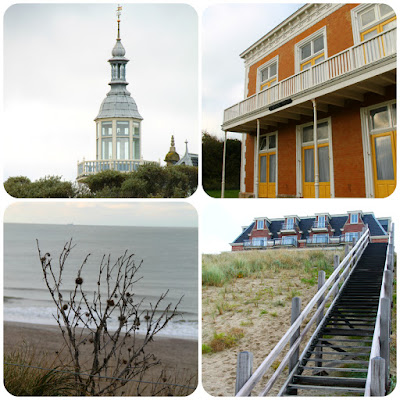 Once back on the high street, which wasn't nearly as deserted by that time, we made a beeline for By Juuls, our restaurant of choice. Recommended by Jos's son, we had lunch there last year as well, and it certainly warranted a return visit.

It was clearly too early for lunch for most people, as we were the first ones to arrive at the restaurant, enabling us to select a choice table near the fireplace, but it was quite busy by the time we left.

Here's a little glimpse of the vintage dress I was wearing underneath my green coat, as well as the brooch and beaded necklace I accessorized it with.

While we were enjoying our meal, a miracle had taken place: just look at that gorgeous blue sky!

What a turn-up for the books, and the perfect weather for the walk we'd planned in that nature reserve I mentioned at the start of my post. 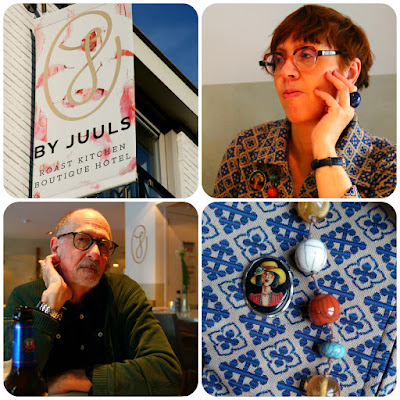 Making our way back to the car, we passed Het Zwaailicht, a delightful clothing shop selling lots of King Louie amongst other things. They had a rail of colourful waterproof coats out on the pavement. and in spite of the fact that I initially baulked at its price (I am used to charity shop prices after all), Jos persuaded me to buy this Polyester Princess worthy blue floral coat to replace my boring black Gore-Tex one, which I never wore for obvious reasons. 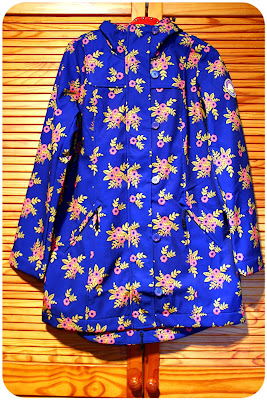 Talking to the lovely lady at the shop, she recommended starting our walk from Domburg instead of from the castle, so we dropped off our purchase in the car, and set off.

De Manteling is a nature reserve of about 740 hectares comprising woodland and dunes, as well as some estates belonging to Middelburg's wealthy merchants who liked to build their country houses in this sheltered part of Zeeland in the 17th and 18th century. 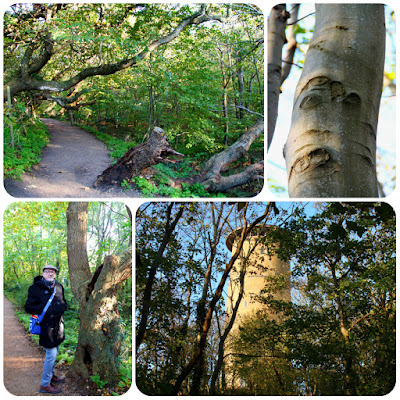 The name De Manteling hints at the traditional function of this wooded area. Like an overcoat (coat is mantel in Dutch) it protects the north of Walcheren against the fierce sea wind.

De Manteling is also quite special because nowhere else in Europe deciduous trees are growing this close to the coast. 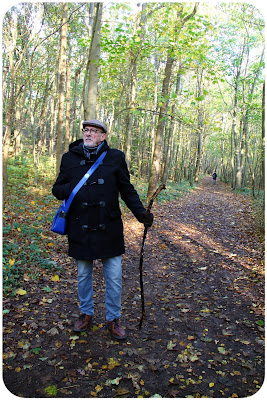 We'd forgotten to retrieve our walking sticks from the car, and as Jos was still suffering from his back, he was happy to find this rather fetching shepherd's crook-like stick in the undergrowth. 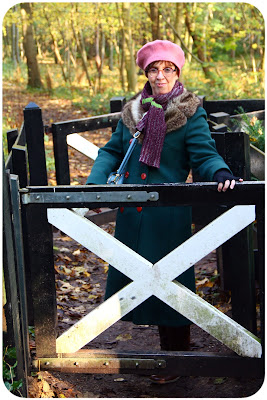 A series of decorative kissing gates gave access to one of the estates. Passing through them, we continued our walk along the winding woodland paths.

Having no map or directions, we were careful to keep close to the coastline, using the striking water tower, which is Domburg's main landmark, and visible from far and wide due to its position on top of the dunes, as a beacon. 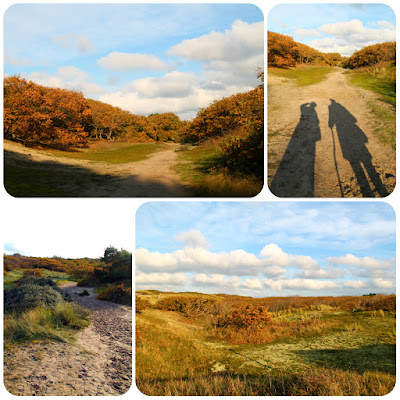 Eventually, we emerged in a sheltered valley in the dunes, reaching as far as the eye could see, all autumnal colours and long shadows.

If it was looking quite outlandish warmed by the weak autumn sun and with a backdrop of cotton wool clouds, I'm sure it would have sent shivers down my spine, literally as well as metaphorically, had we happened upon it on a dark, sunless day. 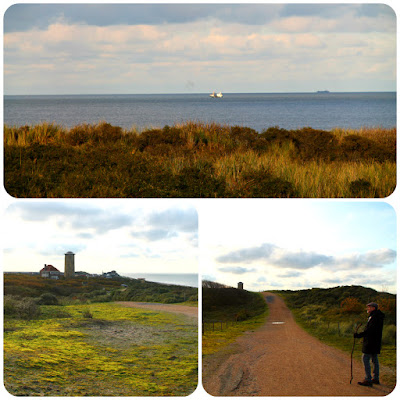 Paths lead into all directions, but we opted to climb the dune separating us from the sea and make our way back to Domburg across the dunes.

Soon we spotted our friend, the water tower, and walking uphill in its direction, we could see Domburg and its coastline spread out before us as soon as we'd crested the hill. 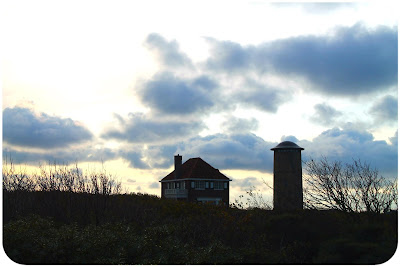 The sun had dipped behind the clouds again when we drew level with the tower, its silhouette contrasting sharply against the shadow-playing sky.

Back in Domburg, we returned to our car, and drove back to Middelburg. But we didn't go straight to our little cottage, as we were invited for coffee and cakes by one of Jos's acquaintances, who happens to live in the town.

A very enjoyable end to an almost perfect day!