A rainy day in Zierikzee

On our third day in Zeeland, we had plans to go a bit further afield and leave the Walcheren peninsula which Middelburg is part of.

For the record, and in order to explain what follows, Zeeland mainly consists of a number of islands and peninsulas, a large part of which are below sea level, hence its name, meaning Sealand.

And for those of you who have been wondering - some of you actually asking the question in their comments - New Zealand was indeed named after Zeeland after it was first sighted by Dutch explorer Abel Tasman.

But let's get back to our itinerary for the day, which included a one-hour journey and took us over a magnificent feat of engineering: a nine-kilometer-long storm surge barrier, which we crossed to the island of Schouwen-Duiveland. 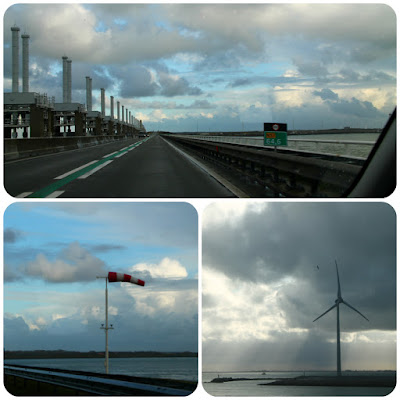 The catastrophic North Sea flood of 1953, which killed over 1800 people in Zeeland, led to the construction of the protective Delta Works, which consisted of building dams, sluices, locks, dykes, and storm surge barriers.

The Oosterscheldekering (Wikipedia offers the phonetic [oːstərˌs̺xɛldəˈkeːrɪŋ] so that you can try and pronounce this tongue-twister) or Eastern Scheldt storm surge barrier, is the largest of these works and was opened in October 1986. 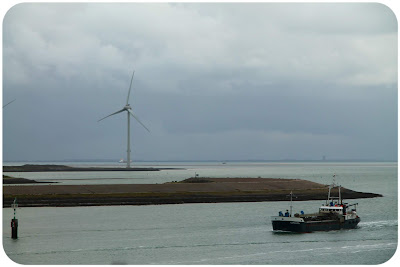 Initially designed as a closed dam, after public protests huge sluice-gate-type doors were installed. These doors are normally open, but can be closed under adverse weather conditions. In this way, the saltwater marine life behind the dam is preserved and fishing can continue, while the land behind the dam is safe from the water.

The views of the estuary, with the greys of the sky almost disappearing into the greys of the river, were breathtaking, the wind turbines standing sentinel ready to fool any modern day Don Quixotes into believing they're mighty giants. 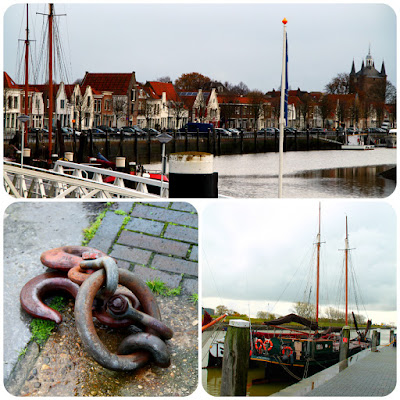 Our destination for the day was a pictureque harbour town called Zierikzee. For all non-Dutch speakers: the zee part of the town's name is pronounced somewhat like zay, meaning that this post's title actually contains an internal rhyme.

With its 568 official monuments, a unique medieval street pattern and the oldest still playing carillon of the Netherlands, it is a tourist hot spot, but on this rainy November day not too many tourists apart from ourselves were out and about.

Our Zeeland guide directed us to a large parking lot at the edge of the town, called Hoofdpoort, to which our satnav smoothly directed us, as she was clearly having a good day.

From there, it was only a short walk along the waterfront to the Nieuwe Haven (New Port) and the local tourist office where we went to get a town trail and map. After a chat with the assistent, a very nice lady whom I promised to send the link of this blog post, we were ready to start our 3,8 kilometer walk along the town's jewels. 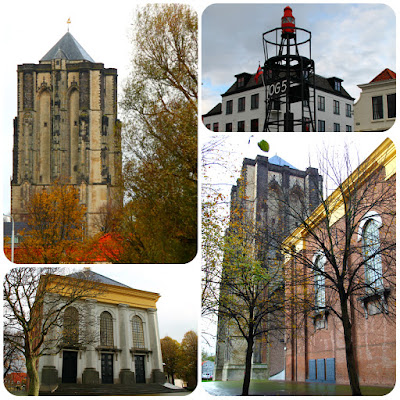 It was at that point that the rain, which had been threatening all through our journey, decided to be killjoy. By the time we were on the right track - even if the walk started right outside the tourist office, we still managed to get lost before we'd even started - we had to make use of our umbrellas. This made consulting our map, while simultaneously checking out the points of interest and taking photographs, quite impossible.

We'd already missed a couple of sights when we arrived at the Dikke Toren (Thick Tower), officially the Sint-Lievensmonstertoren, the 62 meter high tower which is all that remains of a late gothic church which was destroyed by fire in 1832.

The neoclassical New Church was built between 1835 and 1848 as its successor. 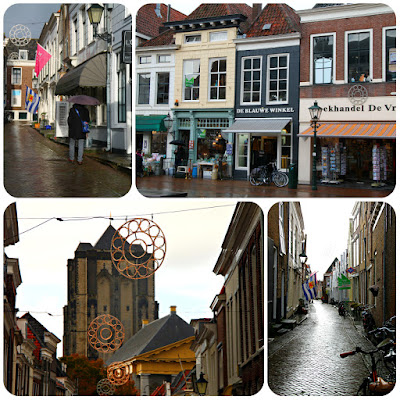 We had a brief respite from the rain while we were at the church square, but soon it was pelting down again, and as lunch time was fastly approaching, we decided to walk into the direction of the town centre in search of a bite to eat.

Zierikzee's heart is its Havenplein (Port Square), where shops, cafés and restaurants, as well as the ubiquitous, often covered and heated, terraces determine the pace.

Too wet to explore our possibilities, we dived into the first inviting looking place, called Brasserie Concordia. In spite of this being only November 13th, the place was already decked out like Santa's grotto, which I admit initially put me off a bit. Anyway, the food was more than plentiful: Jos had lemon sole, while I opted for vegetarian pasta, which came in a large frying pan! 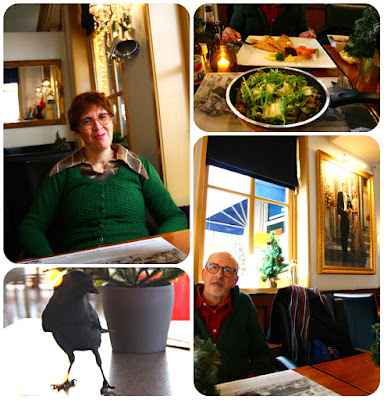 I couldn't resist taking Jos's photo with the state portrait of the Dutch King and Queen taking pride of place behind him.

Outside our window, a cheeky crow was scavenging for leftovers and watching us dolefully. 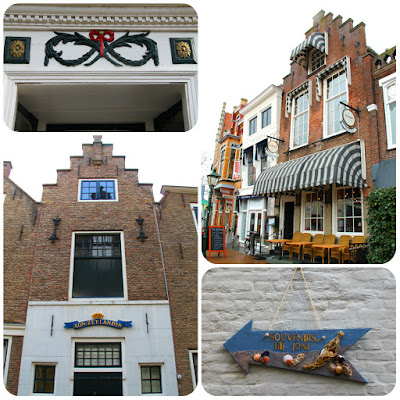 After lunch, we tried to get our bearings to continue our walk, which was easier said than done. As it was still raining lightly, our town trail booklet was starting to get pockmarked by raindrops.

And while we still managed to more or less follow its route, we lost track of the buildings we passed, making some random snaps of any interesting looking ones. 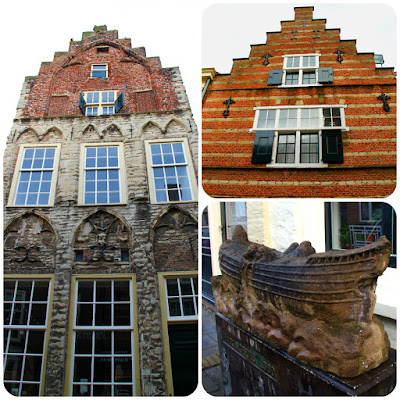 The house on the left in the above collage is called De Haene (The Cock) and with its origins in the 14th century, it is allegedly the oldest one in Zeeland.

The sculpture on the bottom right represents a typical medieval herring fishing boat, but it wasn't mentioned in our booklet, and alas I wasn't able to find out anything further about it online.

Opposite the oldest house is the 16th century town hall with its slender, richly decorated octagonal tower topped by an unusual weathervane: a gilded statue of Neptune brandishing his trident. The statue is a fairly recent replacement dating from the 1960s, its original being on display in the town hall museum. 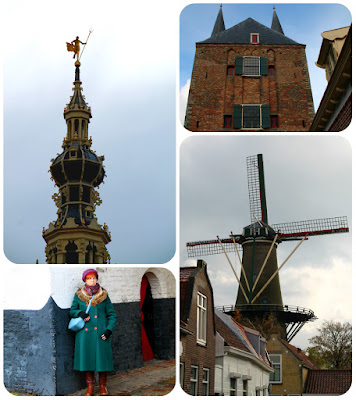 The sudden appearance of the sun prompted us to make the town tour's proposed detour to the Nobelpoort, one of the three remaining medieval city gates (bottom left and top right).

Returning to the main part of the town trail, we passed windmill De Hoop (The Hope), a stone mill which replaced the original wooden one in 1850 and is still active today. 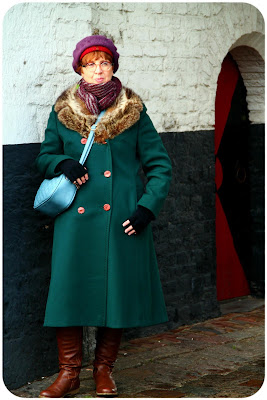 This offers the perfect opportunity for a closer look at what I was wearing. I was so glad I'd had the presence of mind to bring one of my warmest Winter coats. This vintage, bottle green, fur collared woollen coat was a Think Twice find many years ago. Both the purple scarf and beret were second hand finds as well. Underneath the beret, I was wearing an ear warmer headband I'd picked up in Middelburg the day before. Yes, it was that cold! 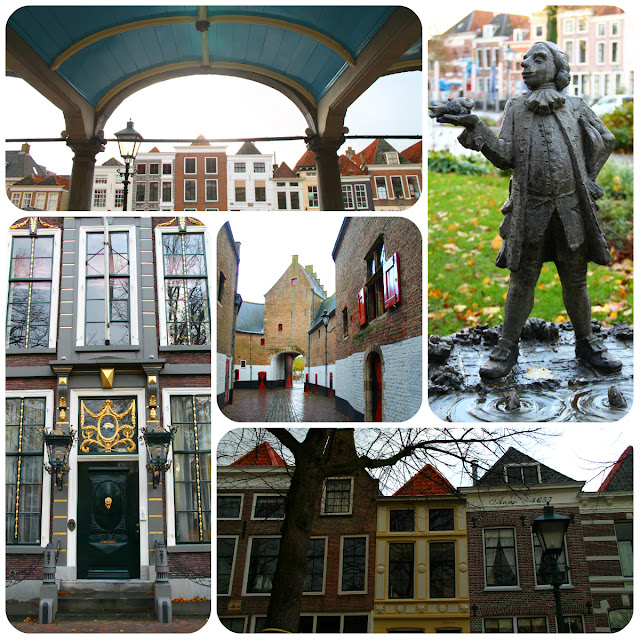 Continuing our town trail, we'd arrived once more at the Havenplein (Port Square) which borders the Haven Park (Port Park) lined with the distinguished and lavishly decorated houses once belonging to the aristocracy.

The statue of the man holding a fish in his hand is that of Job Baster (1711-1775), a townsman and botanist, known for importing goldfish into the Netherlands.

Beyond the park is the old port, with its picturesque old drawbridge and another one of the medieval city gates, the Zuidhavenpoort, or South Port Gate, behind it. Flanking the port on the other side, out of the photograph's frame is the Noordhavenpoort, or North Port Gate. The cobbled road inside this port, and through which - incredibly -  traffic is allowed, is pictured in the centre of the above collage. 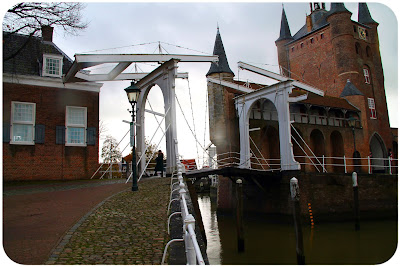 By then, the sun had disappeared yet again and rain was imminent, resulting in a very atmospheric photograph with me as a solitary figure just off-centre. 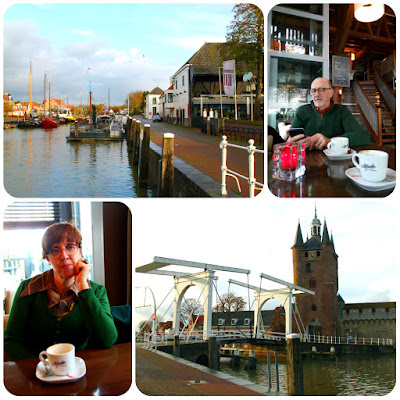 As it had started raining more heavily by then, we frantically looked for shelter, which we found on the opposite side of the New Port, across yet another drawbridge, in Grand Café De Werf.

Here we enjoyed our customary cappuccinos, while waiting for the rain to stop, which it did eventually, giving up its hide-and-seek game with the sun for the day. 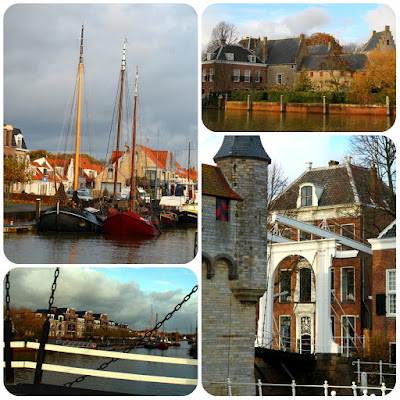 Deciding to come back another time to properly finish what we'd started, we recrossed the second drawbridge (an imposter erected in 1980) and walked the length of the New Port back to our starting point. 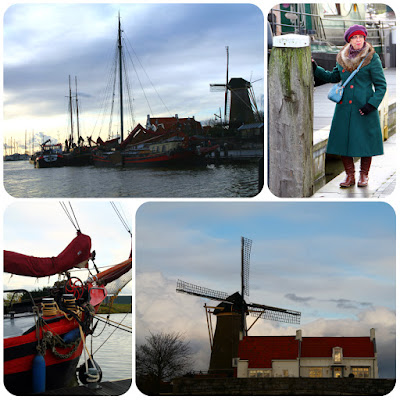 As the sun was dipping towards the horizon, another atmospheric image appeared to feast our eyes upon.

This view of the ships moored beyond the New Port, flanked by the silhouette of the windmill (this one is called De Haas, or The Hare) could have been painted by an old Dutch master. 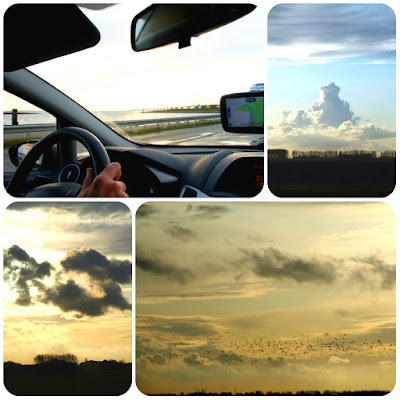 We rejoined our car but instead of driving back the way we'd arrived, across the storm surge barrier, we left the island by way of the Zeeland bridge.

I just managed to snap a quick photo of the bridge in the far distance before a truck passed us from the other direction (top left).

The late afternoon sky offered magical cloud formations, with the icing on the cake, a flock of birds - could they be a murmuration of starlings, or are they rather a murder of crows  - swooping across the darkening November sky.

Posted by Polyester Princess at 19:50