Tales of a wet weekend

By the time you are reading this, we will be in the middle of a mid week break abroad, but as I still had a couple of loose ends to tie up, I thought I'd treat you to a scheduled post.

The First of November, All Saints Day, is a public holiday here in Belgium, and as this year it was on a Friday, we had a long weekend to look forward to. 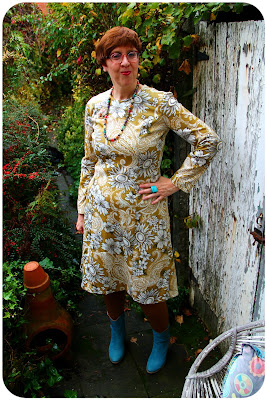 Typically, after a working week full of gloriously sunny Autumn weather, Friday was another damp and dismal day.

I tried to keep my spirits up by wearing this vintage, mustard yellow shift dress. Its print, with its scrolls and giant flowers, always reminds me of opulent wallpaper.

I kept my accessories relatively simple with a multicoloured necklace, a turquoise chunky ring and a gold rimmed ceramic brooch displaying some oriental poppies. Well, it was that time of year again when one wears poppies, wasn't it? 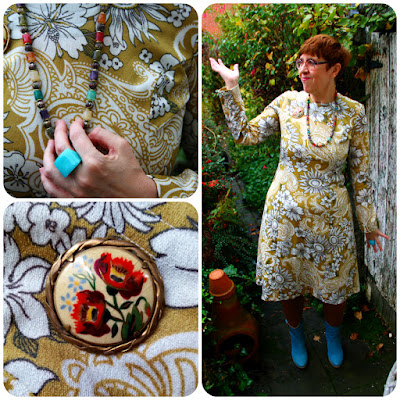 The eagle-eyed among you will have spotted that I was wearing the bright blue ankle boots I snapped up in a charity shop the previous weekend. Did I mention they only cost € 6? 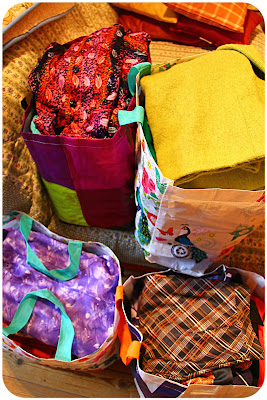 In spite of the weather playing foul again, it wasn't a totally wasted day, as I had a visit from a lady who bought lots of stuff from me at our flea market back in July. She came for a rummage through my bags full of Winter clothes, and I'm happy to say she went home with no less than five dresses, three skirts, a jumper, a blouse and a jacket, leaving me with quite a bit of pocket money! 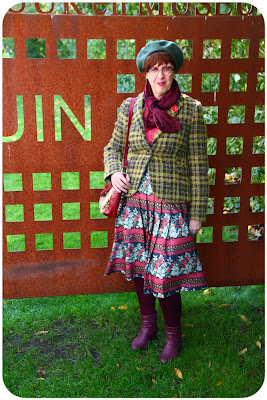 Initially, there was some improvement in the weather on Saturday: even if it was quite windy, at least it wasn't raining, so that there was no need for an umbrella. Charity shops, here we come!

If you think you've seen this skirt before, you are absolutely right: it is a fairly recent find, which Angelica was modelling a couple of weeks ago. Now, finally, it was my turn! 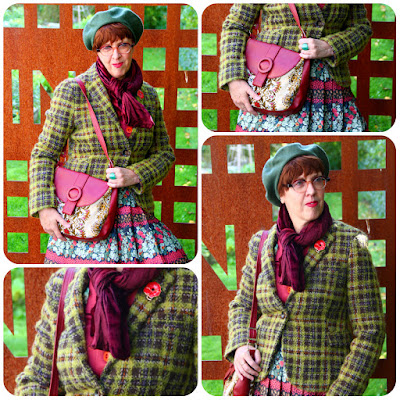 There's a choice of colours in its print, but I decided on autumnal shades to keep it company.

The tweed jacket, which has both green and purple in its plaid, was bought from a local shop eons ago and after narrowly escaping the giveaway pile a couple of years ago, it has now fully earned the space it takes up in my coats wardrobe. To its lapel, I pinned my official poppy brooch bought in Ypres. My other outerwear consisted of a sage green beret and a purple crushed velvet scarf. 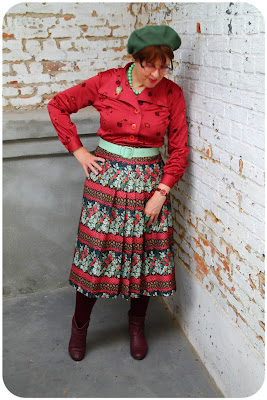 I struggled a bit with what to wear with the skirt, finally settling on this rose red blouse, which I bought back in 2013 from a delight of a vintage shop which has sadly stopped trading. Further accessories consisted of a pale green belt and beaded necklace. Oh, and did you notice that my opaques and ankle boots were an almost perfect match? 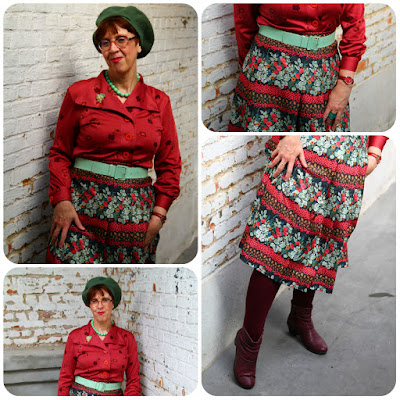 Our rummage in the charity shops yielded some cozy knits and a tweed skirt, but alas I forgot to photograph them. But our main find was this utterly kitsch 1950s ornament.

When I pointed it out to Jos, mentioning that € 7 was quite a fair price, he exclaimed over it, as it turned out his childhood home contained something quite similar.

There's even some photographic evidence. Here's a thirteen year old Jos, with his Dad, Mum and sister and yes, there it is on the mantelpiece!

We added some battery-operated fairy lights which makes it look quite atmospheric at night. 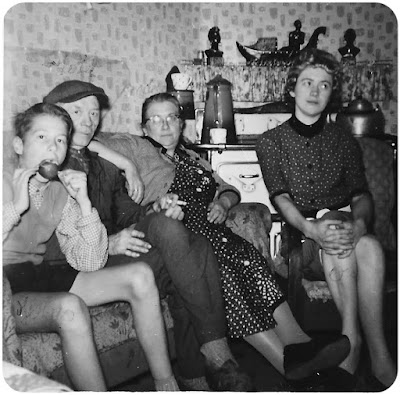 Now I've truly had it with the weather forecasters, as Sunday, which they had promised would be mainly dry with a possible guest appearance of the sun, turned out to be a wet day through and through.

We were off to an antiques fair in a romantic castle about half an hour from where we live, which is being held biannually, in April and November.

As the fair itself isn't huge - browsing it takes about an hour or so - we usually combine it with a walk around the estate. In all the years we've been going there, this was the first time the weather wasn't cooperating. 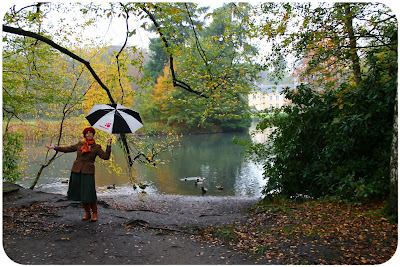 Still, after our visit to the fair and a car picnic - the photo in the below collage, top right, was taken through our windshield - we took our ancient umbrella from the boot and went off for a wander.

No photos of the castle itself this time, as it was almost completely covered in scaffolding, but you can catch a glimpse of it across the lake, with me doing my Mary Poppins impersonation in the foreground. 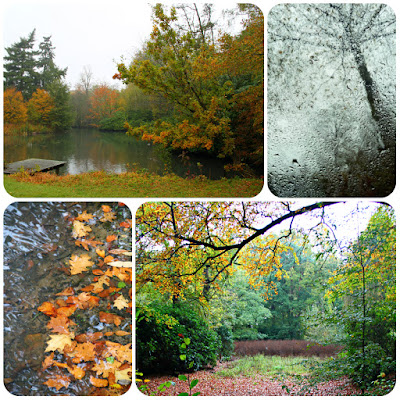 The incessant rain had formed a thin layer of mist which curled around the edges of the lake and hung indolently between the tree tops, slightly veiling their autumnal splendour.

The once crunchy carpet of leaves had become a soggy, slippery mass, so that the longed for leaf kicking was out of the question. 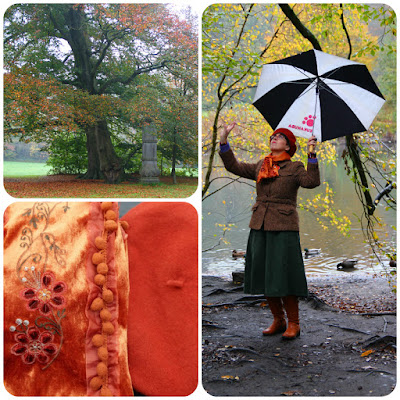 I did my best to match their vibrant shades by wearing pumpkin colours: a burnt orange beret and an embellished crushed velvet scarf edged in tiny pumpkins ... err ... pom poms! 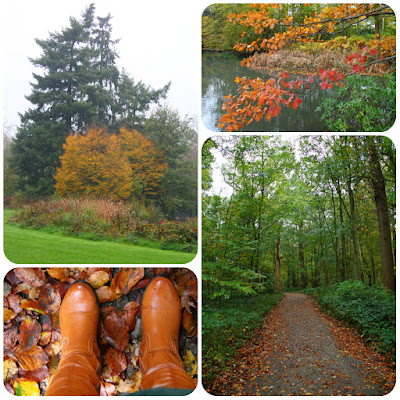 It was my boots' final voyage as the years had finally taken their toll, but what a grand finale they had walking along the leaf strewn woodland paths. 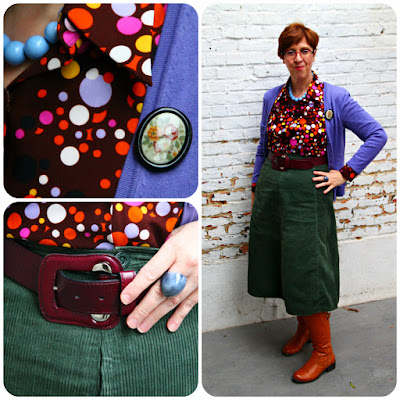 And here's what I was wearing beneath my old tweed jacket. The bottle green cord midi skirt was a recent find from the vintage per kilo shop. I combined it with an aubergine spotty blouse from Think Twice and a charity shopped belt and cardigan.

And now, without further ado, here are the things I found at the fair. 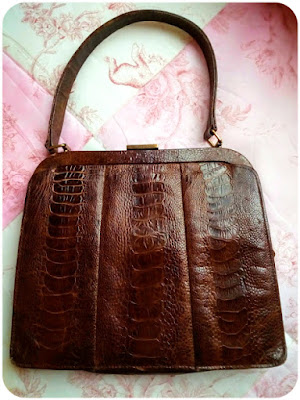 First up is the odd one out. I simply couldn't resist this chestnut brown croc handbag.

It almost goes without saying that I found some brooches. In fact, I bought a total of nine brooches from different sellers. 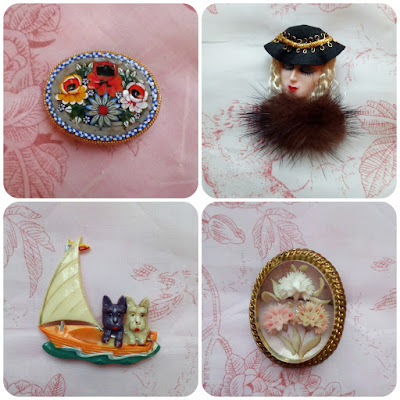 On the top row, another micromosaic one and a behatted and furred lady's head, which both came from the Brooch Lady's archives.

My two favourites are on the bottom row: a celluloid brooch featuring two Scotties in a sailing boat and a gold-rimmed Lucite brooch containing some garden pinks. 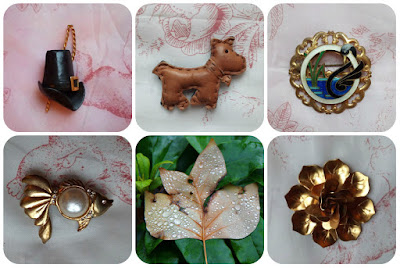 Here are the others. Clockwise from top left: top hat and riding crop, a handmade leather Scottie dog, a waterside scene, a large, shiny gold tone flower and a pearl bodied fish.

What is your favourite?

I will be back with another set of adventures next week!