A leaf kicking kind of day

I confess that we only had the vaguest of plans for our Zeeland break, opting to let our moods and the weather - that often pesky spoilsport - be the deciding factor on how to spend our days.

Monday evening saw a return of the rain, which continued overnight, at one point turning into a clattering of hailstones, with rumblings of thunder in the far distance. And all this accompanied by a stormy wind - always a presence to be reckoned with in these parts - which was making windows and roof-tiles rattle.

It was a bit disheartening waking up to the pitter-patter of raindrops on Tuesday morning, but by the time we'd dragged ourselves downstairs and were having a breakfast consisting of bread and omelettes washed down by copious cups of coffee, the sun had decided to grace us with her presence after all. 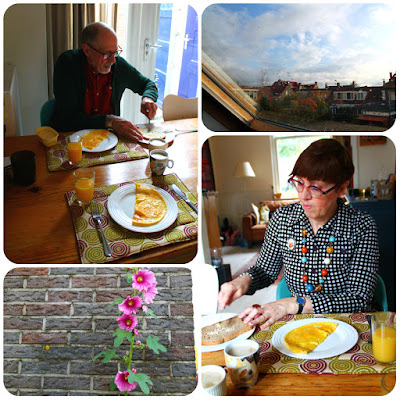 We wasted no time in starting our next adventure, retracing Monday's steps back to the town centre and making a beeline for the Lange Jan tower. The tower belongs to a large abbey complex established around 1100 by Flemish monks, the abbot becoming the most powerful and influential person in Zeeland. That is, until the monks were forced to leave after the conquest of the city by the Prince of Orange in 1574. The complex now functions as the seat of government of the Province of Zeeland and also houses a museum. 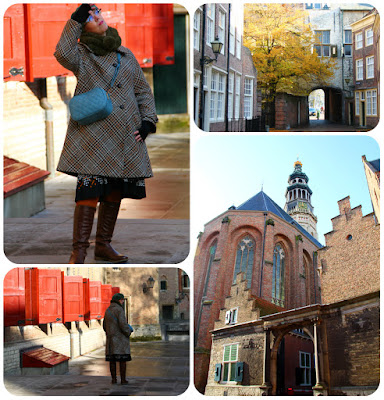 In Summer, you can climb the 207 steps up to the top of the Lange Jan for a spectacular view over the town and the entire Walcheren peninsula, on which the town is situated.

But what had made us come back here in particular were the three adjacent, interconnected churches which are also part of the complex, and which we had to skip last year due to lack of time. 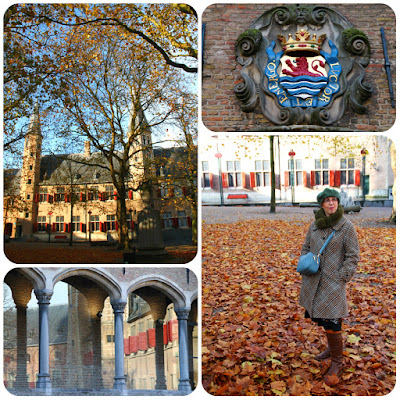 So, imagine our disappointment when we found our entry barred as new floor tiles were being laid in the entrance hall. The man on the job didn't really have a clue but supposed there was another entrance at the back, so we traipsed all around the abbey complex, trying every door we came across, but finding them all firmly locked. 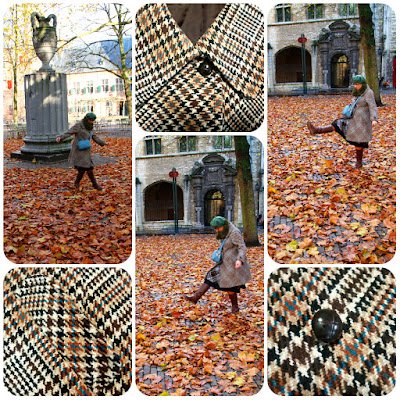 Then, walking into the large abbey courtyard, I was totally transfixed by the thick carpet of Autumn leaves in its centre. All thoughts of looking for a way into the churches vanished from my mind, as I couldn't wait to indulge in some long awaited and longed-for leaf kicking!

I've added some close-ups of my vintage coat, a lucky charity shop find a couple of years ago. 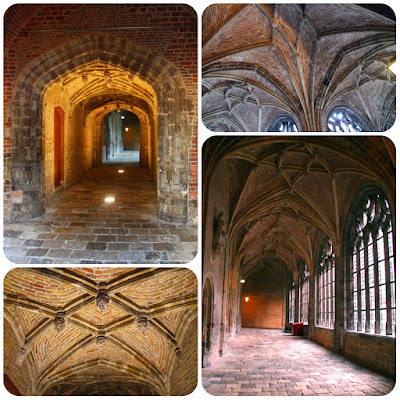 After making some inquiries, a helpful man directed us to an ancient red door which creaked open to give access to some atmospheric cloister passageways complete with intricately carved ceilings.

Opening a side door revealed a tiny courtyard herb garden, which unfortunately wasn't looking its best courtesy of the season and the deadly box tree moth which had clearly been decimating the hedges. 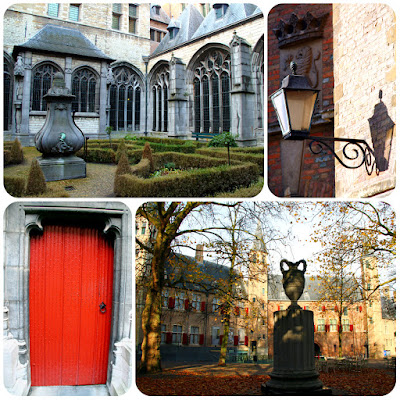 And although there were doors supposedly leading to the churches, they turned out to be all locked as well, so that we had to give up and turn heel.

It was nearly lunchtime by then, so we walked back into the direction of the town centre, passing the St. Jorisdoelen building, originally built in 1582 but rebuilt in 1969-70 after being largely destroyed during World War II. 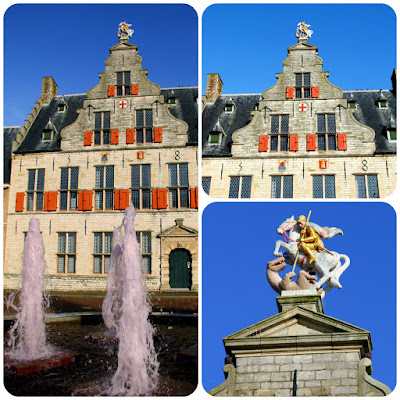 Note the pink hued water in the fountain in front of it, to raise awareness for breast cancer. We thought it looked rather sinister, and were debating whether a mangled body might have been dumped into the fountain, but perhaps we've been watching too many crime series! Middelburg murders?

We had a light lunch in the café of a well-known Dutch department store and were dismayed to find the streets wet upon leaving the building. How fickle the weather is as it had only been about 45 minutes since I'd photographed that bright blue cloudless sky! 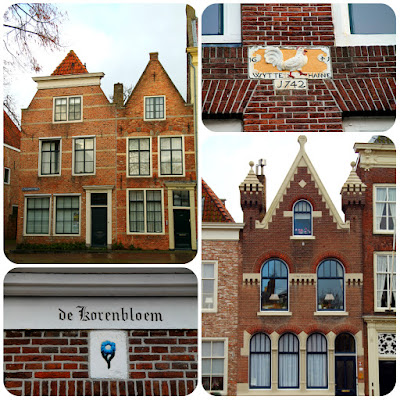 It started drizzling again and we ducked into a shop doorway to consult Jos's weather app, which said it was just a blip and it would stop raining soon.

Not worth the hassle of opening our umbrellas for, we initially thought, but as the downpour increased in heaviness, Jos eventually opened his, if only to allow me to take photographs during our wander, which took us into the direction of the Dam square and the rabbit warren of streets beyond.

After a stop-start game, the rainclouds finally decided they had pestered us for long enough and departed elsewhere. 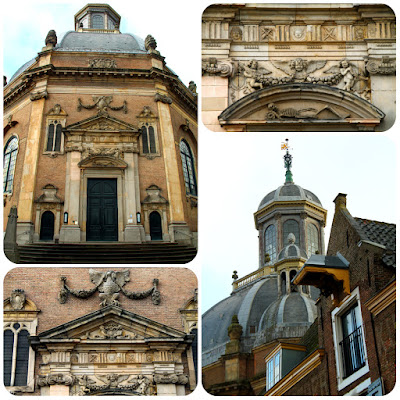 We'd arrived at the Oostkerk (East Church), a monumental octagonal cupola church, built in the baroque style around 1667. After 350 years of being a protestant church, it is now being used for concerts, lectures and exhibitions. Again, we found its door firmly locked, but I've since read that this was simply a case of bad timing, as supposedly all churches and other historical buildings are only open at certain times until November! I'd downloaded a map of a walk on my phone, but its instructions weren't always clear, as by this time we'd lost our way on more than one occasion. Well, that's how it usually is with us! So, we decided to just wander and see where our feet would take us, while our eyes feasted on the glorious - and sometimes funny - architectural and other details. 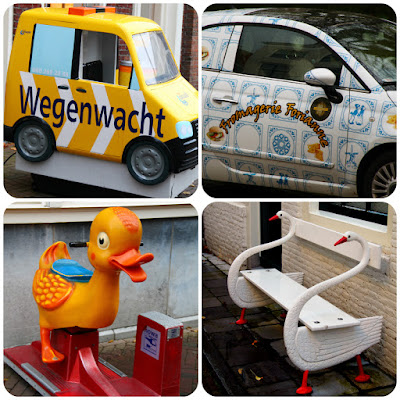 Our feet finally took us back to the Dam Square, which ends in a small park, beyond which stretches out the old port area.

As you can see, blue skies reigned again, the fluffy white clouds having chased away the last of their dark grey cousins. 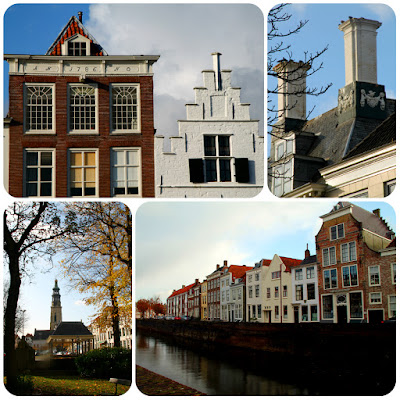 So, in spite of our weary feet and Jos's aching back, we wanted to make the most of the change in the weather by making a little detour to one of  Middelburg's best kept secrets: the Kuiperspoort. 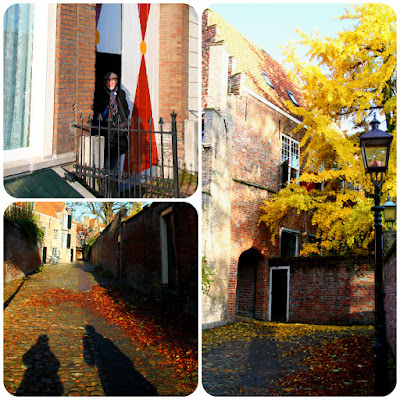 This picturesque cobbled courtyard, with its 17th century gabled warehouses formerly belonging to the Coopers' Guild - now turned into undoubtedly desirable residences - is entered through a wooden gate leading off the Dam square, with a second entrance on the windy quayside around the corner. Stands the clock at ten past three, to misquote Rupert Brooke's poem, we ambled back towards the town centre, not for tea with honey, but for our customary cappuccinos and a shared piece of delicious cheesecake.

Jos insisted I took a photograph of the interior of Jamin, a famous Dutch sweets shop. The coloured stripes you can see on the bottom left are huge tubes filled with different coloured candy. Just looking at them is giving me toothache! 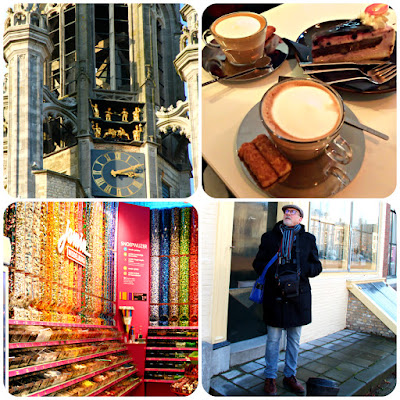 Our energy levels - albeit temporarily - restored, we took the long way home by walking a short stretch along the town's ramparts, which have been turned into a delightful 4 kilometer long park.

While Jos sat down on one of the park's benches to spare his back, I went to explore the nearby Seismolen (molen is Dutch for mill), a former corn mill dating from 1728 and one of the oldest still existing windmills in Middelburg. Two cormorants sat drying their wings and digesting their meals, and we sat watching these gangly, almost pre-historic looking birds, until one of them took flight.

Taking this as a sign that it was time to head home as well, we crossed the bridge leading over the canal, enjoying the relative warmth of the late afternoon sun on our backs and rejoicing in the glorious golden glow of Autumn. 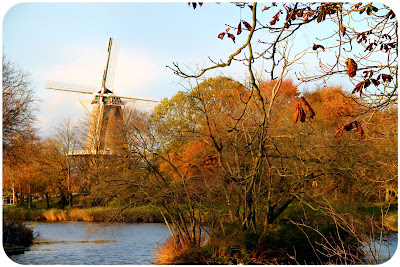 She stands
In tattered gold
Tossing bits of amber
And jade, jewels of a year grown old:
November.

Posted by Polyester Princess at 19:49