On the cusp of Autumn

Apologies to those of you who have come here hoping to read another installment of my travelogue! I'm keeping the final episode simmering on the back burner for now and I'm treating you to a September recap instead.

Can you believe we've almost reached the end of September? It's quite dizzying how time seems to whizz by.

For two weekends in a row, we have been blessed with the most gorgeous sunny weather, which obviously we have been making the most of.

By heading to one of our favourite nature reserves, for instance, which is what we did two Sundays ago, topping up our vitamin D levels in the process. 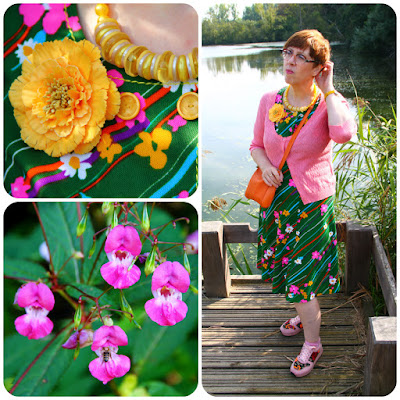 Isn't this green floral Diolen frock a delight? It was love at first sight when I spotted it on the rails at Think Twice about 4 years ago, and in spite of the fact that it wasn't in the greatest of conditions, resistance was futile: I  just had to make it mine!

The lining was in tatters, so I removed it completely, and there were quite a few rough patches caused by pilling, which I managed to make a whole lot better by patiently snipping off the worst offenders with a tiny pair of scissors. The things one does for love! I also replaced the less than perfect buttons with these buttercup yellow ones.

More yellow was added with my necklace and flower corsage, and I even wore a watch with a yellow strap. The colour pink was represented by the lacy cardigan I wore on top and my pink floral sneakers, which are vying with my Clarks Cloudsteppers for the title of most comfortable footwear. 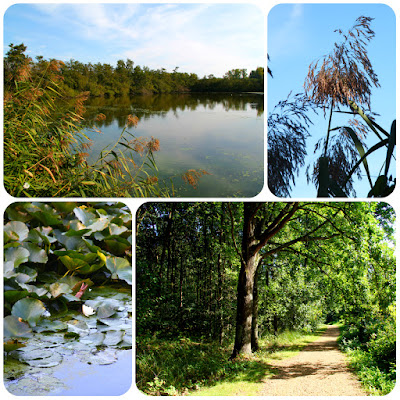 You've already visited this nature reserve, which has over 675 hectares of marshland, ponds and lakes, with me several times before. It really is a place for all seasons, but our favourite times to visit are from Autumn to early Spring.

At the tail end of Summer, it is actually at its lushest, if slightly overgrown, with the green of the foliage close to its sell-by date, at that awkward between-the-seasons moment just before the leaves start to turn. 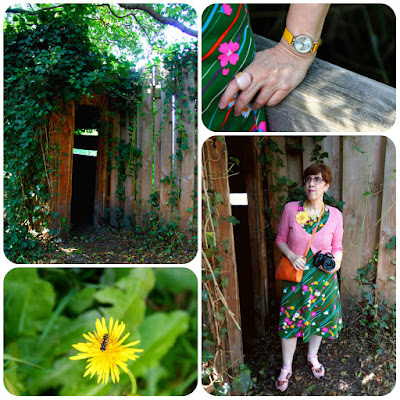 Passing the first of the ponds, we turned off towards the bird hide, which was covered in rampant garlands of ivy and hops.

Hoverflies were flitting among out-of-season dandelions or joining the bees in feasting upon the pollen of the pink-hued Himalayan balsam, which they obviously think is the bee's knees! 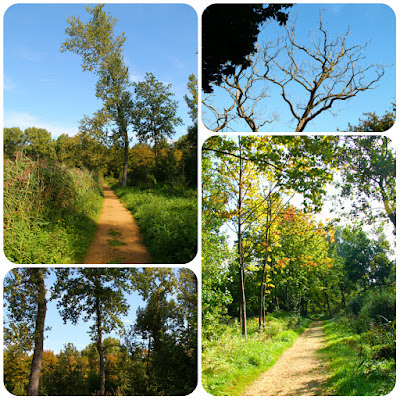 The soundtrack was provided by their buzzing mingled with the droning of a plane far above our heads and the eternal bickering of the waterfowl.

But even if the weather was rivalling that of a warm Summer's day, the sights and smells were definitely those of these glorious days on the cusp of Autumn. 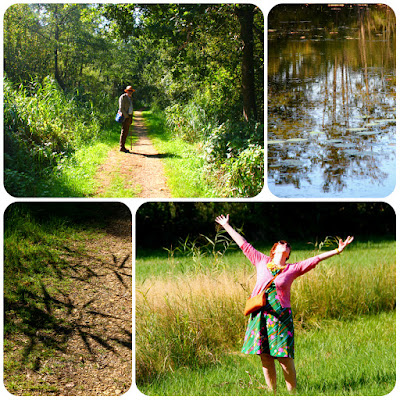 Woodland paths meandered beneath a canopy of green, which was shadow-playing with the sunlight filtering through the trees.

It's these fleeting peaceful moments that make my heart leap with joy! 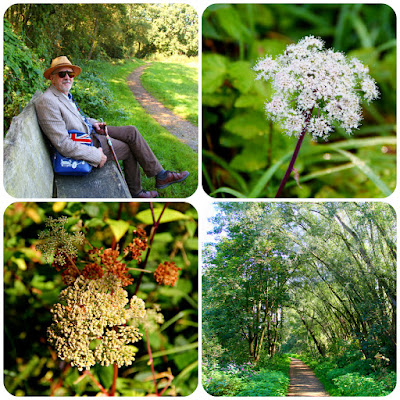 We always stop at this rough-hewn bench, where we sit in quiet contemplation enjoying the stillness of the air.

The bench is quite high, causing my feet to dangle inches above the ground. No such problems for Jos though! 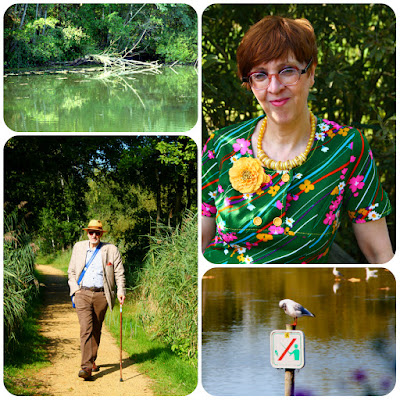 After this soul refreshing day, it wasn't easy getting back into working mode. As always, I tried to chase away the dark clouds, whether real or imaginary, by wearing my beloved vintage frocks.

I only managed outfit photos on a couple of days and, taken with my phone's camera, they are not the sharpest of the bunch. 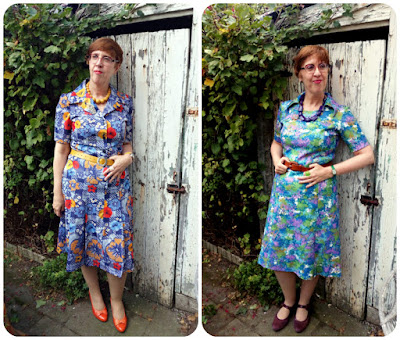 On the left, the eagle-eyed among you might spot the vintage dress I'd recently scored at the charity shop, while the dress on the right is an old favourite in a water colour print of blues, purples and greens. 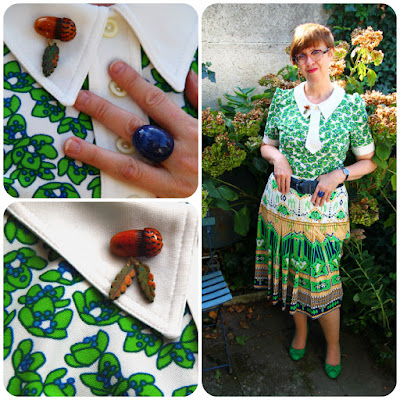 Friday's outfit was an exercise in pattern mixing achieved by combining this skirt and blouse, both of which had previously only been worn with plain items.

The blouse is another one which I suspect to be the top half of a dress. Apart from its gorgeous blue and green florals, it was the cute white collar and button placket which persuaded me to buy it.

As a nod to impending Autumn - which I read started on 23 September this year - I pinned a wooden acorn brooch to the blouse's collar. 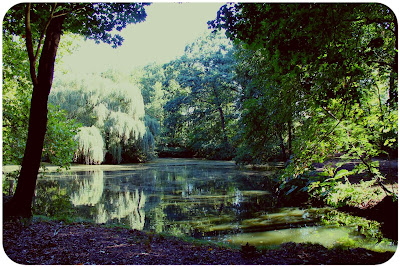 Speaking of acorns, we walked on a veritable carpet of them on Saturday, and escaped several others which dropped from the great height of the trees with a mighty plop.

On our way to our usual Saturday afternoon round of the charity shops, we stopped at a leafy park for a stroll.

The sunlight bouncing off the semi-opaque water of the park's ponds was confusing my camera lens into creating this magical landscape where elves and fairies might be dwelling. 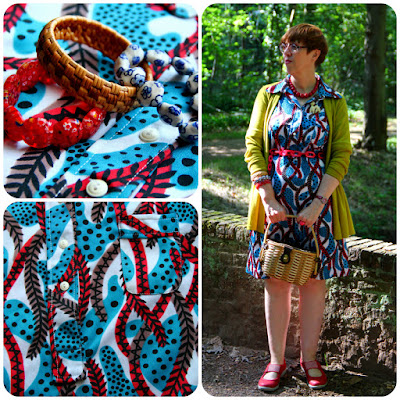 The dress I'm wearing was picked up for next to nothing at Think Twice earlier that week. The hem had dropped in several places and I spent an hour or so on Friday restitching it.

After all that effort, I thought I might as well give it an outing before packing it away for next Summer.

The chain belt - another recent charity shop find - seemed to be made for it, and I added a necklace in a similar colour, as well as an armful of bracelets and a vintage poodle brooch. 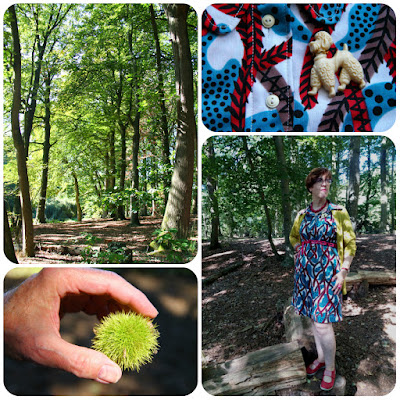 The basket bag is another favourite which has earned its place among my handbag collection. It's just big enough for weekend essentials, but would never work as a weekday bag. 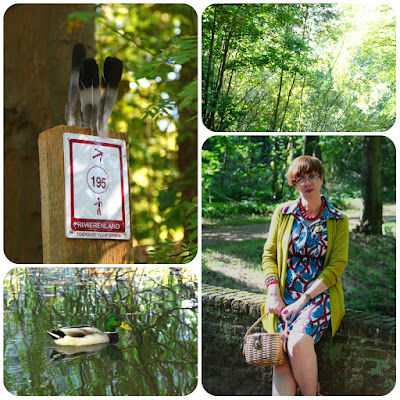 After our turn in the park, we hit the charity shops, but pickings were meagre this time.

Nevertheless, I pounced upon this straw basket with appliquéd flowers and leaves. Not that I haven't got enough straw baskets already, but the truth is that I find them simply irresistible. 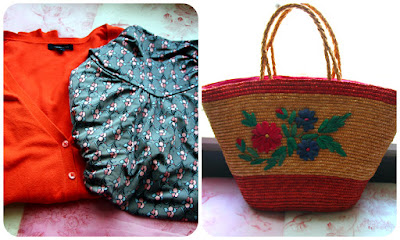 My other buys were a bright orange cardigan in a shade that was I was still missing and a stretchy, long-sleeved grey top with a dainty pink flower print.

Oh, and I found Jos a brushed leather Winter coat, which I presume will make its debut on the blog before too long.

I'm leaving you for now, as I've got things to do: I'm starting the weekend early this week by having a day off tomorrow. See you next time!

Posted by Polyester Princess at 19:31